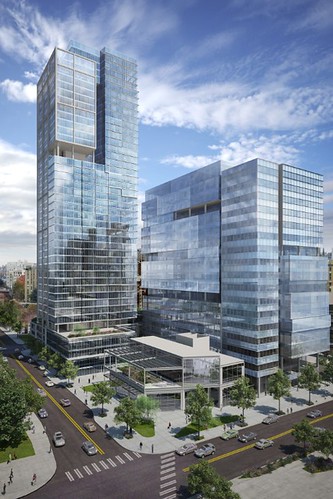 Thursday’s city of Seattle land-use bulletin and public comments by one of Vulcan Real Estate’s top executives give insight into what the company is planning for a prominent block in the South Lake Union neighborhood.

Under the latest plan, the block at Denny Way and Westlake Avenue North would have a 41-story residential tower and a two-story retail building on the west side of the block, where the Denny Playfield currently is located. The tower would have 470 units, and there would be 386 stalls of underground parking, the land-use bulletin state.

The east side, now occupied by the company’s South Lake Union Discovery Center, would have an 18-story office building with 400,000 square feet of space and a three-story commercial building. There would be below-grade parking for 442 cars. The Discovery Center, which gives an overview of real estate development in the area, will be dismantled and assembled at a new location. It was designed to be dismantled and moved when it was built about nine years ago.

This is an update from earlier this year, when company Director of Real Estate Investment Strategy Lori Mason Curran said Vulcan was considering two scenarios. The first would be all office space and the second is one office tower and one residential tower.

On Thursday, during a panel discussion at the Commercial Real Estate Women lunch, she said the plan now is to do a 400-foot tall residential tower and a 240-foot tall office tower, though she said, “We are still early on that.”

She did not spell out a timeline for the project Thursday. Earlier she said it would depend on market conditions.

Vulcan has been in the news several times today. The company has also proposed a 12-story building in the space currently occupied by Guitar Center on Westlake Avenue North and Mercer.