by Danny Abriano
8 months ago

In a vote this afternoon that passed 42 to 3 (with 1 abstention), the City Council approved the Willets Point Development plan.

The approval paves the way for construction to begin on the $3 billion dollar redevelopment project near Citi Field. A few days ago, local officials added a wrinkle to the plan – demanding that the city provide $70 million dollars for ramps that would lead from the Van Wyck Expressway to Willets Point.

Ever since the plan was introduced in 2008, there had been dissent from both local residents and owners/operators of the auto body shops in the Iron Triangle that will be demolished to pave the way for the redevelopment.

Recently, local residents led a march to Citi Field in protest of the plan. Their main complaint, was that there isn’t a clear answer regarding when construction of the affordable housing will begin in the area (that construction is part of the redevelopment plan).

The redevelopment of Willets Point, which will be carried out by the city, Fred Wilpon’s Sterling Equities, and other private parties, has been one of Mayor Michael Bloomberg’s key agenda items for years. Now that the final hurdle has been cleared, construction can begin on what will be a hotel, school, convention center, restaurants, bars, shops, housing, and parking. The bulk of the construction will take place next to Citi Field on 126th street, where the auto body shops/Iron Triangle currently are.

Another part of the development, that was added in more recently, will be the construction of a mall where Shea Stadium once stood, at a location next to the ballpark that is currently being used for Citi Field parking.

According to the Queens Chronicle, Phase 1 of the plan will focus on demolition and cleaning up the area where the chop shops currently are on 126th street. After that is complete, the hotel, shops, restaurants, and bars will begin to rise (construction on that portion of the plan is scheduled to be completed by 2016).

After that phase is complete, the mall will be built next to Citi Field (where the parking lot currently is). That phase of the construction is scheduled to be completed in 2018.

I can understand the skepticism from the local residents who were against the plan, and empathize with the business owners who will be displaced. I also realize that no matter how the redevelopment turns out, there will always be a faction of people who despise it simply because Sterling Equities and Fred Wilpon are attached to it.

However, I think the big picture is what’s important here. While a large portion of the area referred to as “The Valley of Ashes” by F. Scott Fitzgerald in The Great Gatsby has been redeveloped, the Iron Triangle has remained. It’s a veritable wasteland, with dozens of businesses strewn next to one another atop a pile of dirt.

The chop shops were visible from Shea Stadium, and are now visible from Citi Field. When fans attend Mets games and either enter the ballpark via the bullpen gate, or head to McFadden’s for a drink, the Iron Triangle is right next door.

Now that the redevelopment has been approved, what’s next door won’t be an eyesore for much longer. Instead, it’ll be turned into something that’s beneficial for the city, local residents, and those who attend Mets games.

A New York State Supreme Court justice has given the green light to a controversial 1.4-million-square-foot shopping mall and entertainment center slated to rise on public parkland next to Citi Field in Queens. The “Willets Point West” development sits within Flushing Meadows–Corona Park and is currently being used as a parking lot for Mets fans. Opponents of the project tried to block it in court on the grounds that giving away public land for private development would require state approval. In mid-August, justice Manuel Mendez rejected that argument, writing in his ruling that developing a shopping mall served the “public purpose of improving trade or commerce.”

Following the decision, the project’s developer—the Queens Development Group (a joint venture between Sterling Equities and the Related Companies)—and the New York City Economic Development Corporation (EDC) vowed to push forward with their plans. A spokesperson for the EDC told AN, “We are pleased with the decision affirming the plan to redevelop the Willets Point area.” He added that the project is expected to break ground once the site is fully acquired and remediation work is completed. Meanwhile, the plaintiffs in the case have vowed to appeal.

The creation of “Willets Points West” only represents a piece of the $3 billion, 62-acre redevelopment surrounding Citi Field. The fight to develop this land dates back through many mayoral administrations, but was ultimately advanced in the final months of the Bloomberg years. In 2013, the New York City Council gave the plan its blessing after the development team pledged to write a multi-million dollar check to the Flushing Meadows–Corona Park Alliance, create a rooftop farm for the mall, and provide 300 units of affordable housing in the surrounding district.

As “Willets Point West” moves forward, there are plans in the pipeline to turn the gritty, industrial acres behind the Mets’ right field into a mixed-use development. To kick-start the transformation, the city sold 23 acres of Willets Point to the Queens Development Group for one dollar.

[quote]WILLETS POINT — Demolition work began last week on a section of
Willets Point, the first sign of progress on a multi-billion dollar
overhaul from the city and private developers.The strip of closed
auto body shops along 126th Street between 38th and Roosevelt avenues
was completely demolished by Tuesday morning by Tully Construction, the
project’s general contractor.
[…]
Demolition is expected to be completed by Aug. 31, according to the city.[/quote] 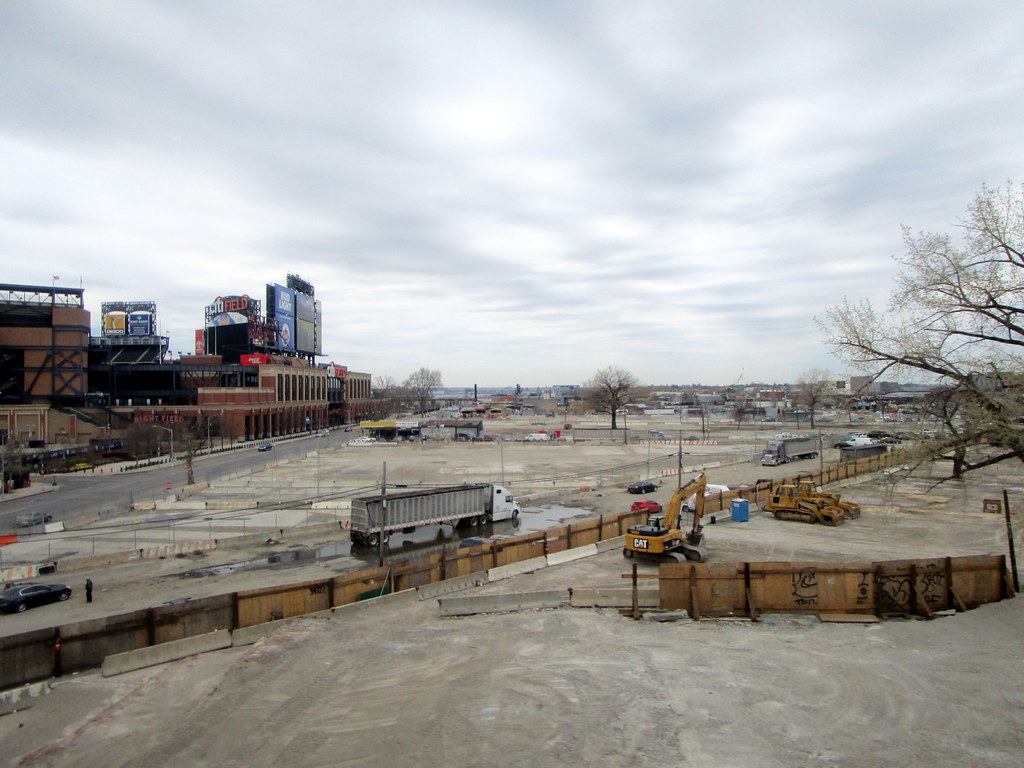 Citi Field, 04/15/17: many of the Iron Triangle buildings to 38th Avenue have been demolished - photo taken from a moving Manhattan-bound #7 train (IMG_3128a) by Gary Dunaier, on Flickr

Is this moving forward? 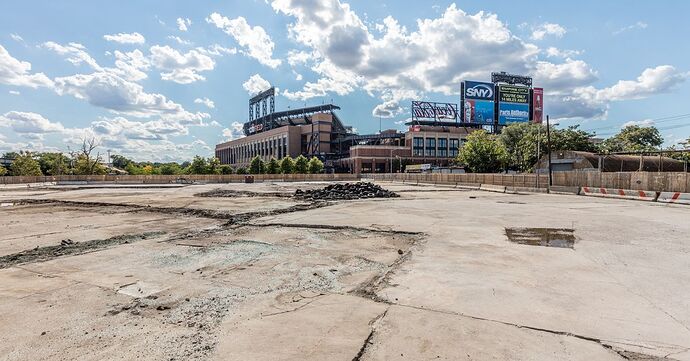 Willets Point megaproject in Queens is back on, with a focus on affordable...

The de Blasio administration is restarting the stalled development, and there’s no mall in this iteration.

Getting rid of the mall is a no-brainer. Malls are a dying paradigm.

A development site in Willets Point spanning about three acres is hitting the market with an asking price of about $217 a square foot.

This grimy track of land east of Citi Field is littered with junkyards, but because it sits in a transportation corridor right next to a major sports venue, it has the potential to be much more. There was a plan to redevelop it under Mayor Michael Bloomberg — but after he tried to swap out the affordable housing proposed by city council for a giant mall, Willets Point turned into a years-long legal battle that ended with the whole thing being scrapped in 2015. Mayor de Blasio is trying to jump start the project again (sans mall), with 1,100 affordable apartments, a school, and acres of open space. A funding boost from the feds could turn this site of infinite blight into an affordable destination for Queens residents. 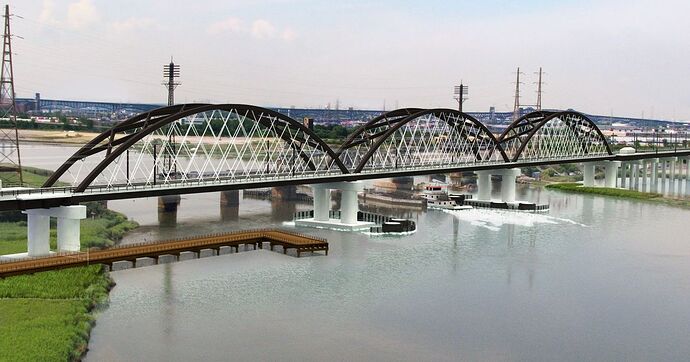 Amtrak is just the beginning. 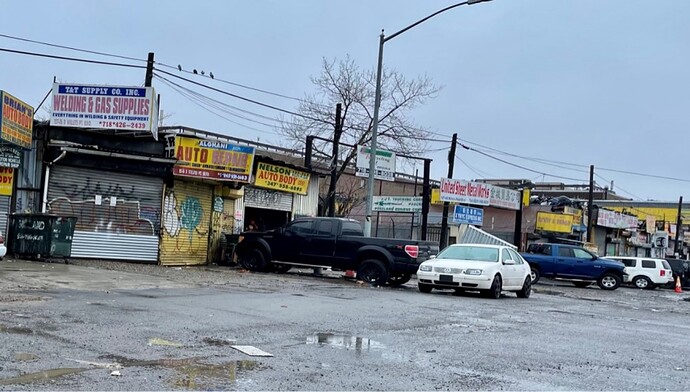 May 12, 2021 By Christina Santucci The Queens Borough Board voted to approve plans for the first phase of Willets Point’s redevelopment Monday evening – which would include construction of 1,100 affordable apartments, public open space and a new... 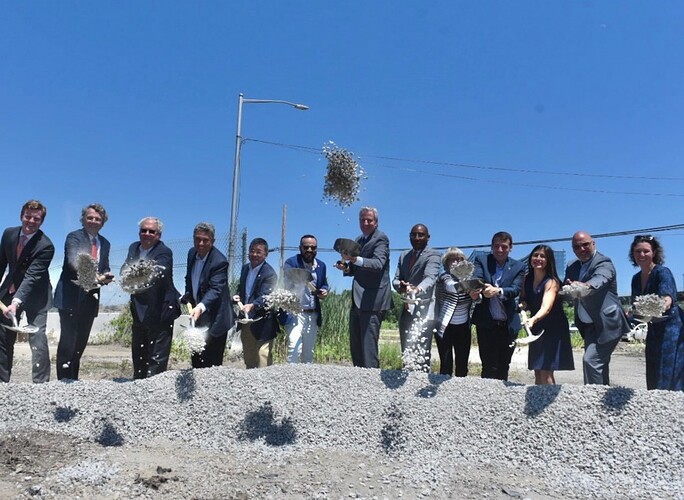 June 17, 2021 By Allie Griffin City officials and local lawmakers celebrated the start of the environmental cleanup of Willets Point Wednesday — which paves the way for the redevelopment of the area. Six acres of land near Citi Field is being... 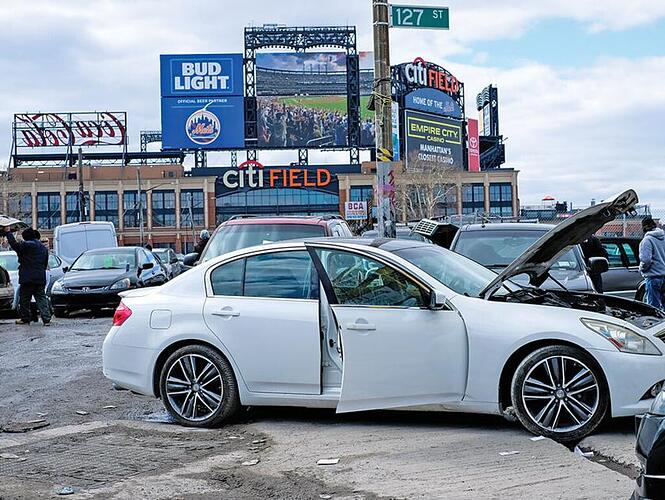 Casino at Willets Point on the table

Issues like bail reform and mayoral control made headlines in recent weeks as Albany struggled to come to an agreement on the state’s budget for fiscal year 2023. But among 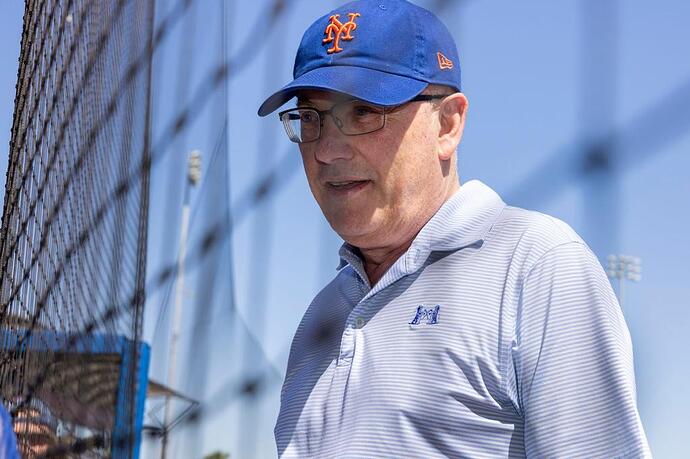 While his Mets look to shore up their ranks ahead of the trade deadline, owner Steve Cohen is at the same time angling to secure one of the three downstate commercial casino licenses, dispatching c…

sounds like Mayor Adams is going to pitch his own proposal for Willets Point. https://nypost.com/2022/07/26/mayor-eric-adams-to-approve-nycfc-stadium-for-queens-sources/ 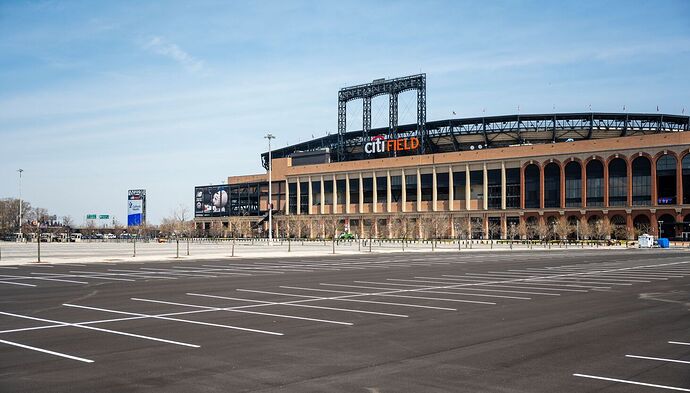 Mets’ Casino Gamble Could Crap Out in Parking Lot 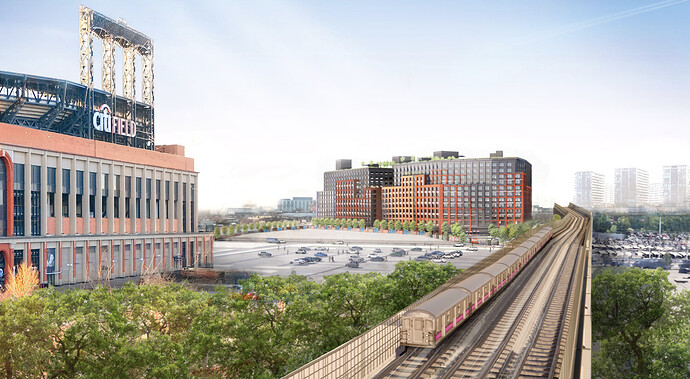 City officials unveiled their latest design plans for the redevelopment of Willets Point on Wednesday evening – nearly two decades after whispers of a redevelopment of the neighborhood began. 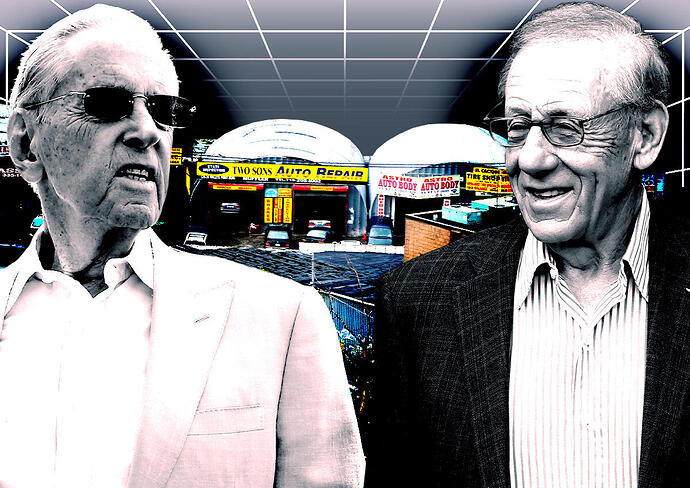 The filing by Queens Development Corp, a joint venture of the firms, calls for two 12-story mixed-use developments at 126-43 and 126-55 39th Avenue in Willets Point.

With 881 affordable apartments between them, the buildings represent the bulk of the 1,100 such units promised when city officials announced in February 2018 a deal for the first phase of the broader redevelopment of the area. Plans for a third affordable building have yet to be filed 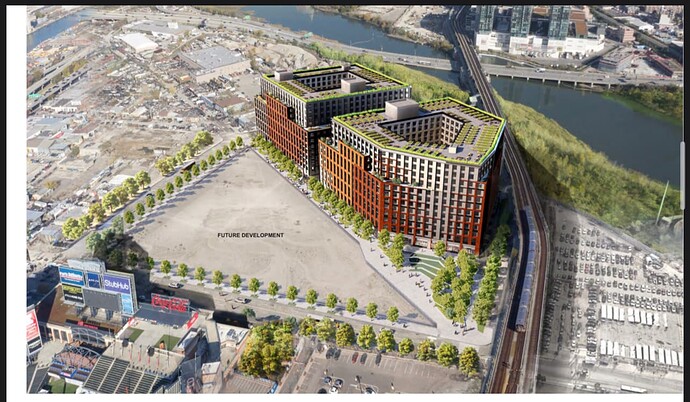 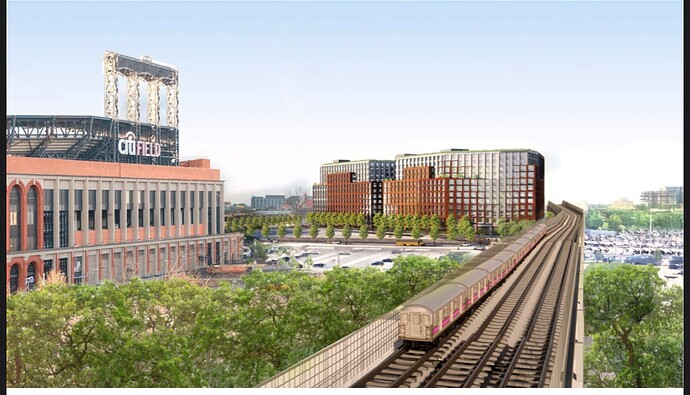 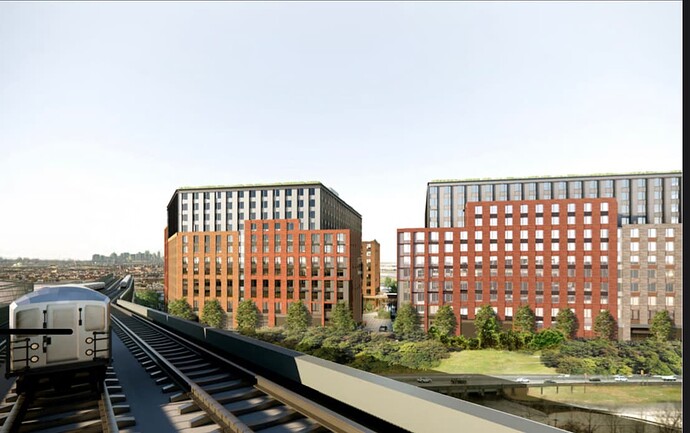 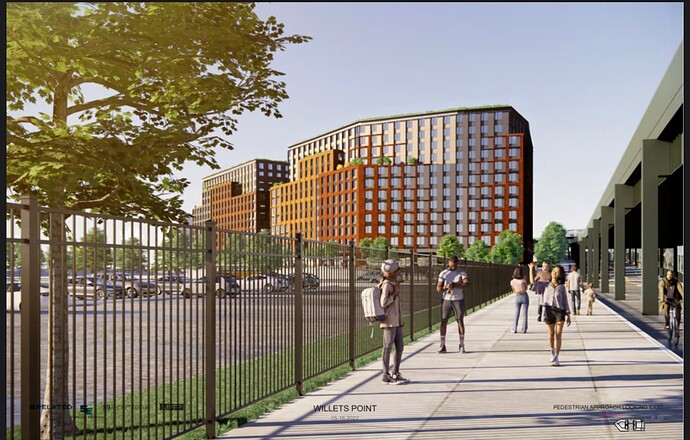 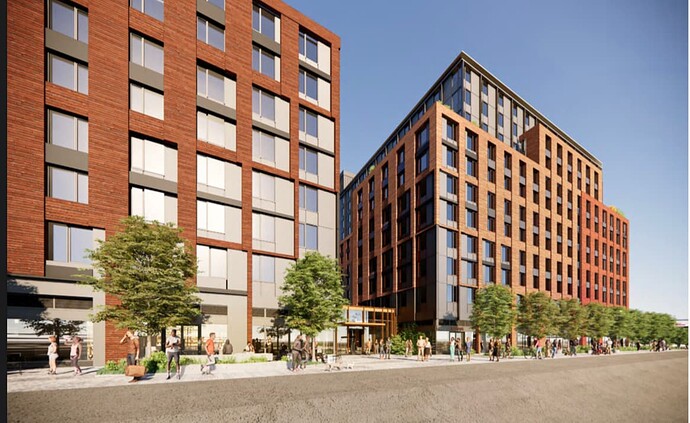 now imagine some luxury residential, a casino and another stadium thrown in the mix.