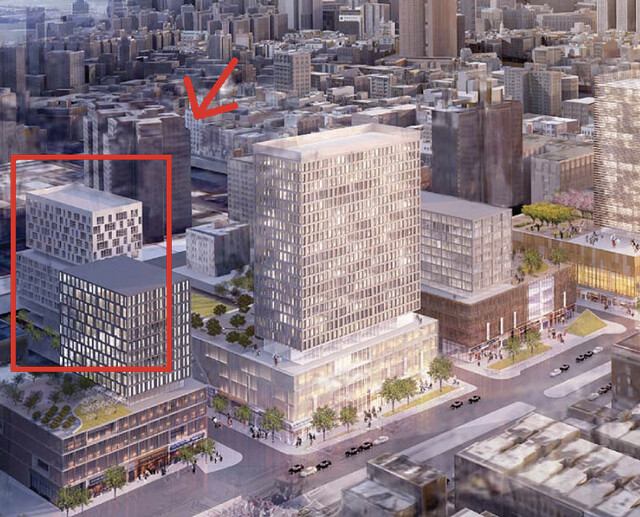 Late last year, the developers of Essex Crossing – the design scheme chosen for the politically fraught Seward Park Urban Renewal Area project, on the Lower East Side – said that construction would commence on the site in a year or two. Now they’ve taken one of the first steps, filing an application for a new building permit at 141-145 Clinton Street.

The exact site the mixed-use building will sit on is not totally clear – city data puts the lot at either site 3, 4 or 5, and YIMBY believes (though cannot confirm) that the application refers to site 5, which is the only parcel south of Broome Street, and will also contain the project’s park component. 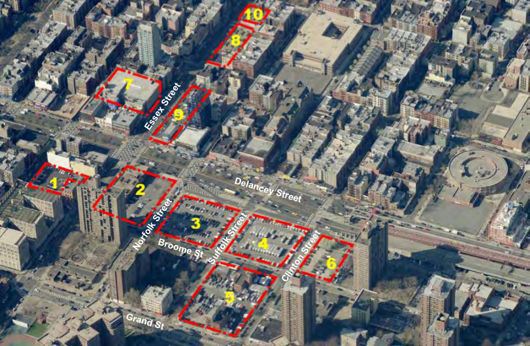 SPURA site, image by the EDC

But whichever site it is, the more than 300,000-square foot building would rise 15 stories and 160 feet. It will contain 211 apartments spread over nearly 180,000 square feet of residential space, plus a 43,000-square foot commercial component. (The overall project includes a new movie theater, grocery story and bowling alley, as well as a tech incubator, general office space and a new Essex Street Market.) If it is indeed site 5, the residential units will be evenly split between market-rate and affordable ones.

More generally, the first phase of the project – which includes work on sites 1, 2, 5 and 6 – will include 556 housing units, 311 of which will be affordable (and 100 of which will be reserved for seniors).

The project’s developers, who emerged victorious from the selection process back in 2013, are Taconic Investment Partners and L+M Partners, with SHoP and Beyer Binder Belle responsible for the design.

The site has languished for generations, since the original tenements were seized from their owners during the time of Robert Moses’ urban renewal. Until recently, the narrative had been that politicians and community groups simply couldn’t decide what to do with the land — but a different, less savory story has since emerged.

Earlier this year, the New York Times published a bombshell report accusing New York State Assembly Speaker Sheldon Silver and William Rapfogel (disgraced former leader of the United Jewish Council of the East Side) of holding up the project in an attempt to reverse the Lower East Side’s demographic shift away from Jews and towards blacks, Latinos and Chinese.

In any case, the redevelopment is finally moving forward, and the city will try to give priority to some of those families, mostly Puerto Ricans, who were displaced by the urban renewal project four decades ago. While the old tenements should never have been torn down in the first place (at least by the government), what’s done is done, and the project will finally fill one of the largest remaining voids from the city’s darkest days. 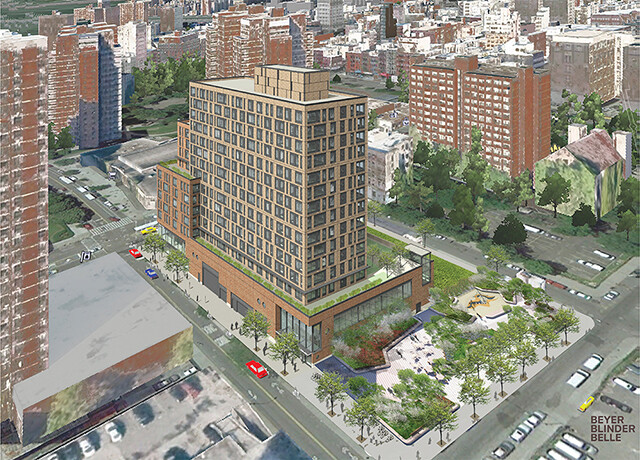 Up next was site no. 5, located at 145 Clinton Street (a small street used primarily as an approach road to the Williamsburg Bridge) and was designed by Richard Metsky of the preservation-minded architecture firm Beyer Blinder Belle. It will have 211 units of rental housing in the 160-foot, 15-floor building, nearly evenly split between market-rate units and subsidized ones, with the same income restrictions as the previous building. The building itself will only occupy 50 percent of the site, which will also have park space designed by West 8. In the building will be a supermarket and other retail and commercial space. Metsky sees the building as a “bridge between Delancey Street and the community to the south.”

Taken today. You can see it peaking out above the van. 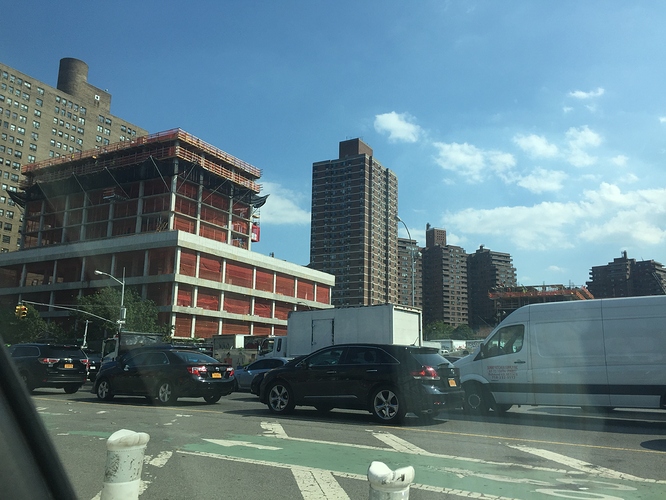 Hey Tectonic, you should try that drone thing with this site. 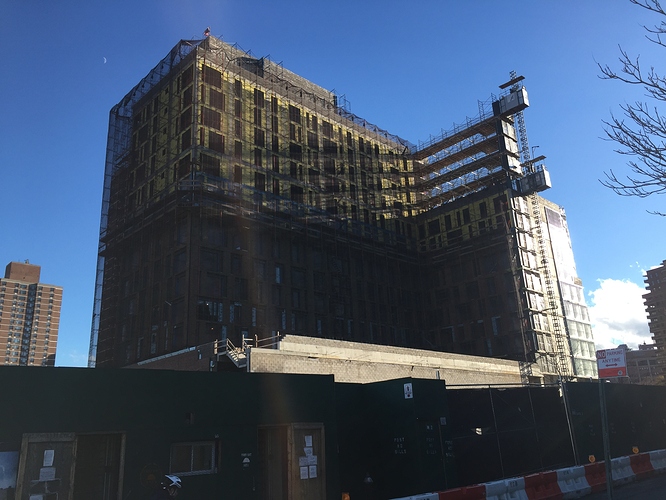 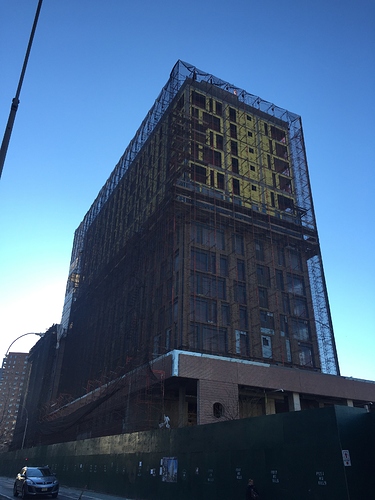 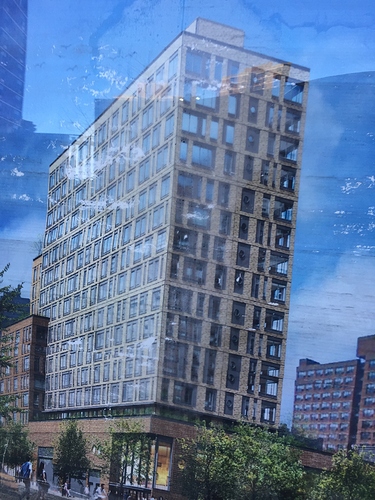 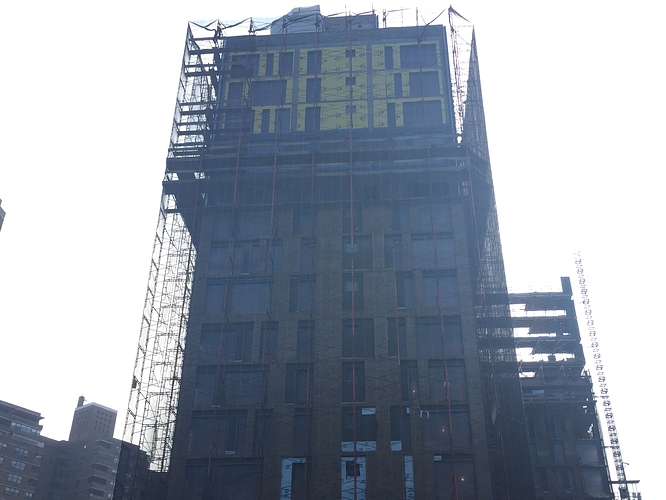 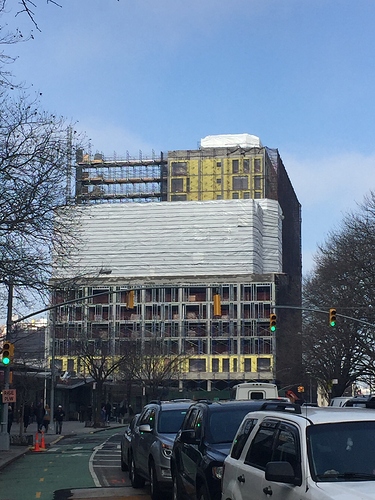 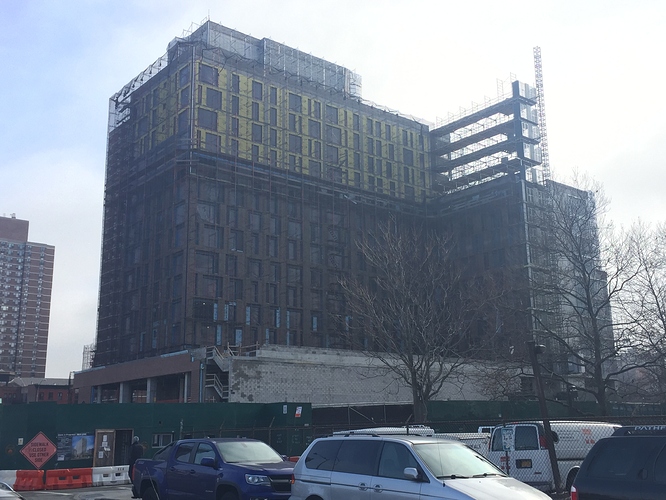 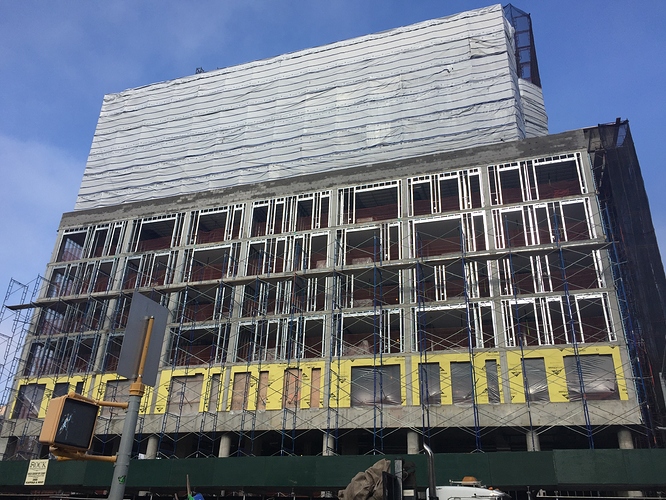 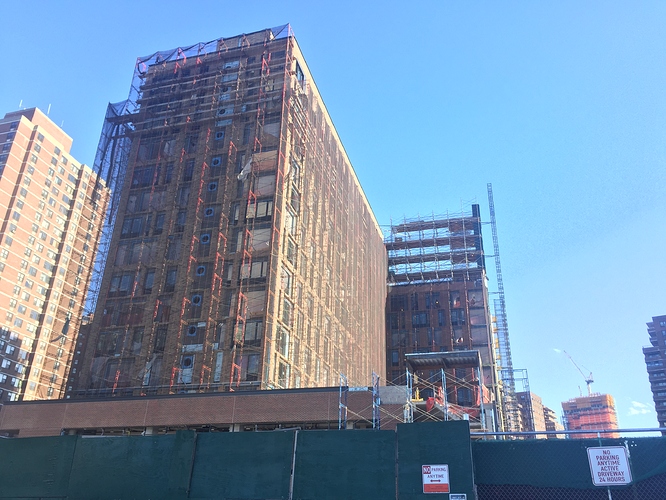 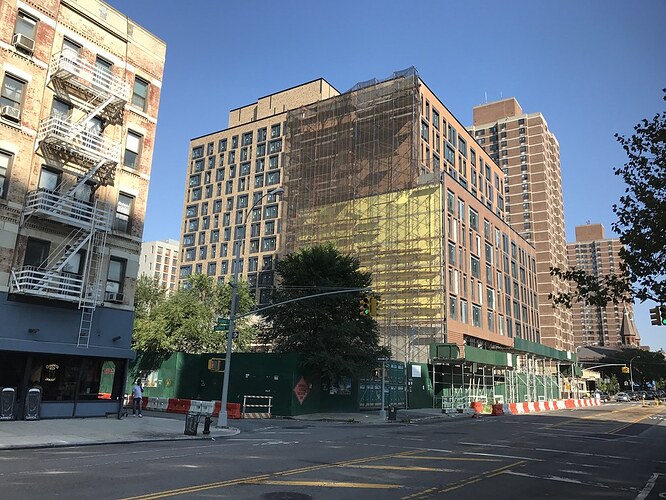 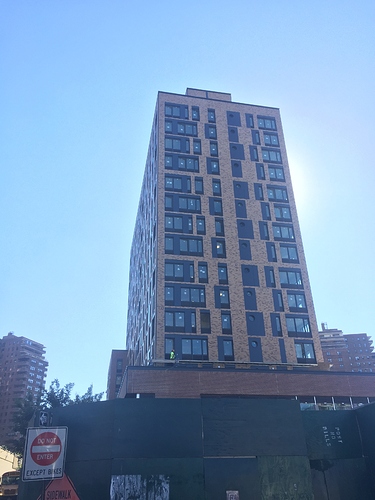 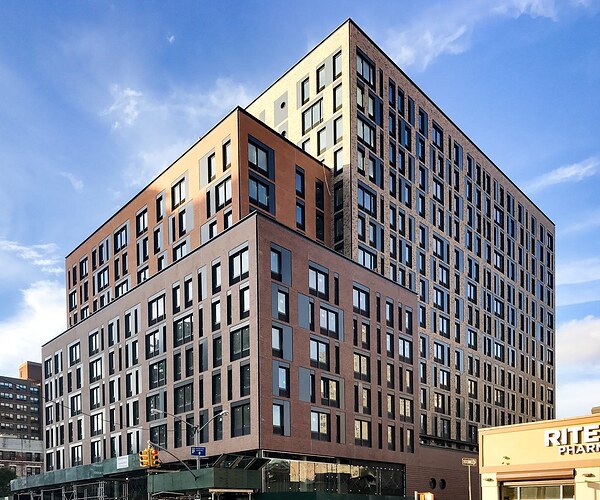 marking it as completed. It was recently re-christened as “The Rollins” 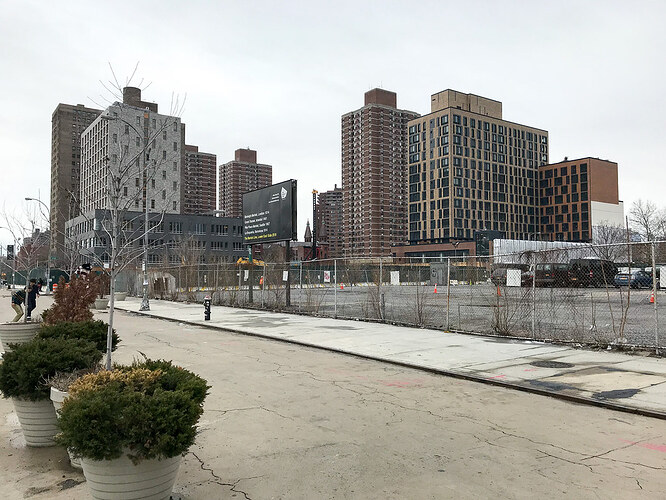 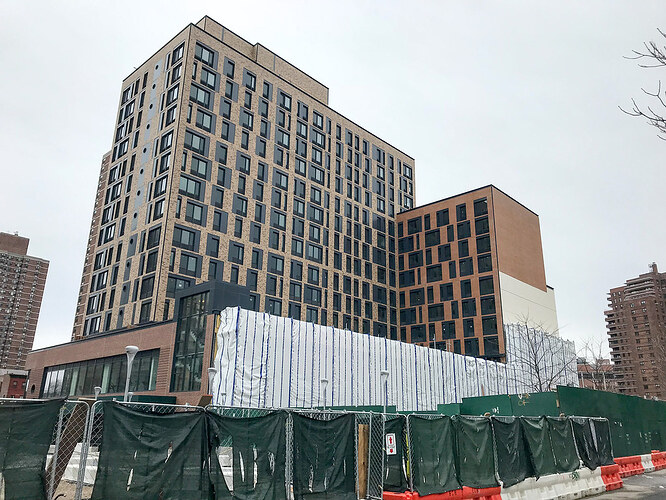 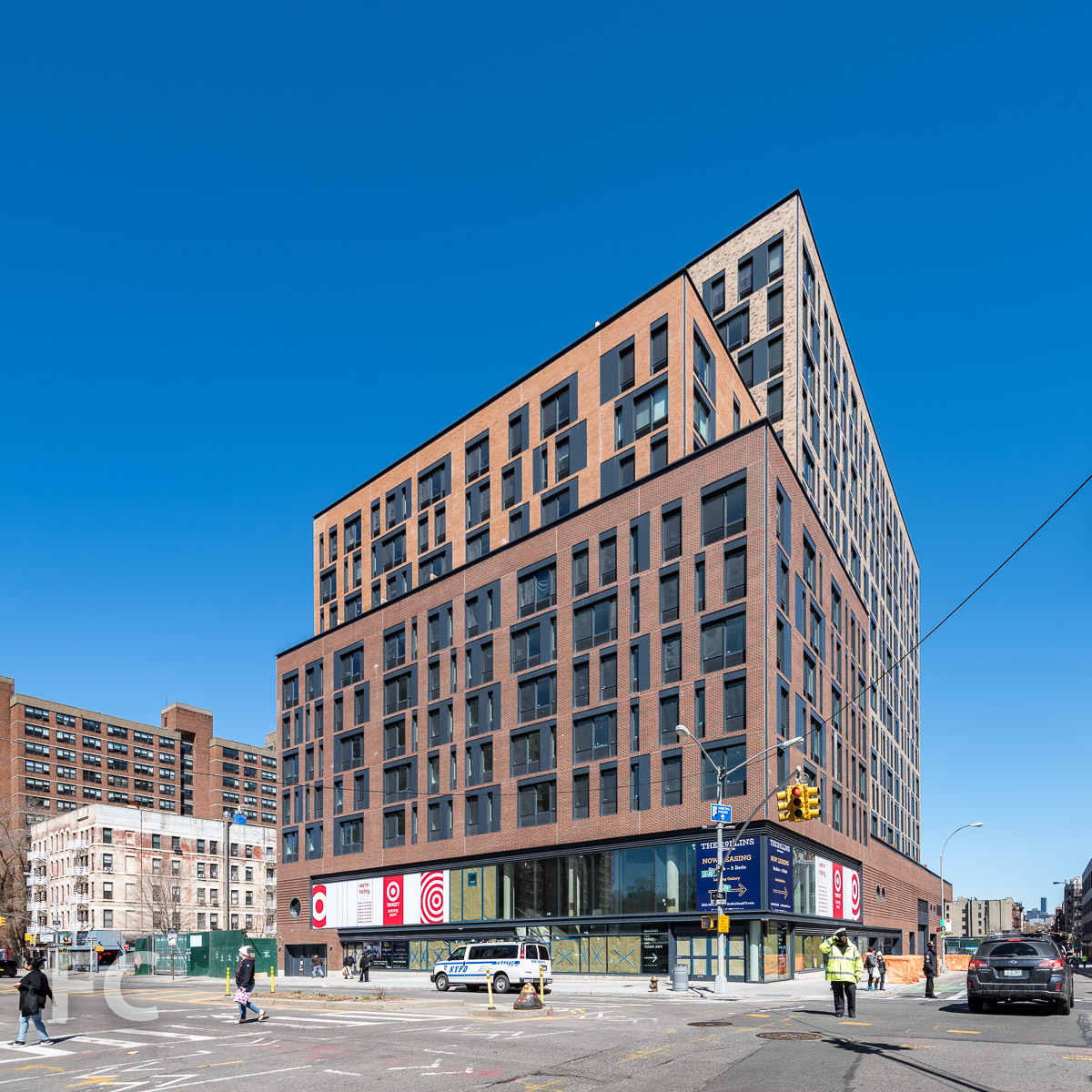 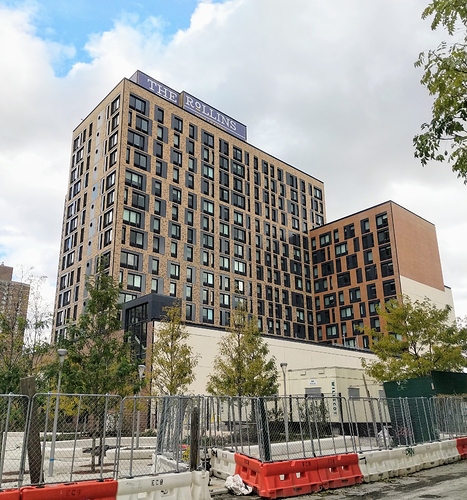 this is really ugly. I guess it fits in with a lot of the LES 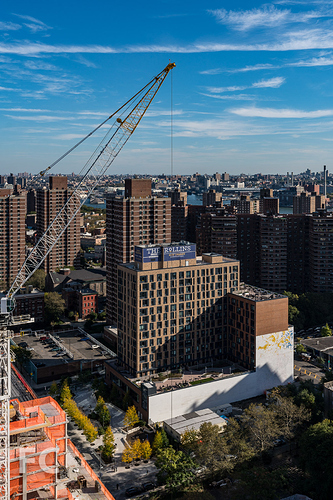 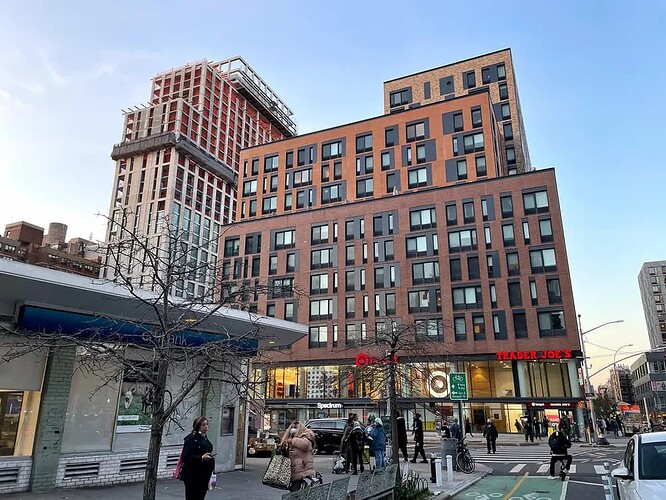 The Lower East Side used to refer to one large stretch of Lower Manhattan, but an influx of artists in the 1960s would come to differentiate the East