A corner of New York City, by Delancey and Essex Streets on the Lower East Side, has been a vacant, bitterly contested area for decades, as community groups and politicians battled to a standstill over what would replace tenements that were demolished in 1967.

But after a three-year effort to forge a compromise, the Bloomberg administration plans to announce on Wednesday that it has selected developers to erect a complex called Essex Crossing at the location, long known as the Seward Park urban renewal area. The development would include retail markets, restaurants, office space, a movie theater, parks, an Andy Warhol Museum and 1,000 apartments. Half of the apartments would be for low-, moderate- and middle-income families.

Designed by SHoP Architects and Beyer Blinder Belle, the glassy, six-acre complex would be built over the next decade by a consortium on nine city-owned lots in a rapidly gentrifying neighborhood that was once home to working-class Italians, Jews, Puerto Ricans and Ukrainians.

The redevelopment would tap into the past by giving priority to some of the 2,000, largely Puerto Rican families displaced four decades ago, and into the future by creating a neighborhood hub with badly needed housing, small-scale retail and office space for tech companies and budding entrepreneurs.

“This project is the pinnacle of urban development in 2013,” Deputy Mayor Robert K. Steel said on Tuesday. “It has all the hallmarks of a Bloomberg administration project: transforming an underutilized asset into a place that serves the diverse needs of the community.”

To reach this point, the administration engaged in an unprecedented collaboration with the local community board and a task force starting in 2008. If Essex Crossing is built, it would also represent the culmination of compromises by various factions in the neighborhood and by the city itself.

Edward Delgado, who was a teenager in 1967 when his family was forced to relocate, said he had always wanted housing for families of limited and modest means built on the site. “We had to go along with 50 percent affordable and 50 percent market-rate,” he said, “or we would’ve had another 50 years of empty lots.”

The developers selected for the project — L&M Development Partners, BFC Partners, Taconic Investment Partners and Grand Street Settlement — won out over some of the city’s most prominent builders. In return, the developers will pay the city $180 million and start the first building within 18 months.

The announcement comes about three and a half months before Mayor Michael R. Bloomberg is to leave office, and some critics argue that his successor could easily overturn this plan.

“The new mayor is going to want to put his own stamp on the project,” said Harold Jacob, general manager of the East River Housing Corporation, which operates 1,675 cooperative apartments in the neighborhood. “I don’t believe the city produced a good plan.”

But elected officials, developers and others say that for the first time in nearly half a century there is a consensus on what should happen. The plan has the support of Councilwoman Margaret S. Chin; State Senator Daniel L. Squadron; Community Board 3; and the State Assembly speaker, Sheldon Silver, who lives nearby and has blocked past proposals.

The redevelopment of the area had eluded Mayors John V. Lindsay, Edward I. Koch and Rudolph W. Giuliani, as well as Mr. Bloomberg in 2003. The longstanding split in the community had some Latinos and housing advocates demanding that the city build only low-income housing on the site, while residents of the nearby co-ops countered that only commercial development was appropriate.

“It was an exercise in frustration,” said Richard LeFrak, a developer who was twice selected to rebuild Seward Park but was unable to move forward. “You had the collision between the Jewish community in the Grant Houses and the Latino and Asian communities.”

The six blocks in the Seward Park urban renewal area have served as a symbol of the struggle to preserve affordable housing in working class neighborhoods against rapidly encroaching luxury development. Just north of Delancey and Essex Streets, the Blue Building, a 17-story glass condominium built in 2007, towers over the neighborhood.

During the recession, late in 2008, Dominic Berg, then the chairman of Community Board 3, convened a committee to try to reach a consensus. “People were tired of looking at empty lots,” Mr. Berg said.

At the same time, Madelyn Wils and David Quart, executive vice presidents at the city’s Economic Development Corporation, also began working on creating a ground-up development plan for the largest city-owned site below 96th Street. Her bosses were skeptical, but gave them the go-ahead.

Both sides drew representatives of disparate neighborhood groups to come up with a set of development principles, which eventually included mixed-income housing, an emphasis on artisanal retail rather than big-box stores, office space that included incubators for budding entrepreneurs, parks and a new Essex Street Market that would still have vendors that provided goods for many of the low-income residents of the neighborhood.

But they did not reach a consensus until after John Shapiro, chairman of the Center for Planning and the Environment at the Pratt Institute, conducted private sessions in which proponents of opposing visions, who had never sat at the same table, were asked for solutions that everyone could live with.

“One thing that made this so hard,” Mr. Shapiro said, “is that all the players around the table wanted assurances that if they agreed to something, the terms of the deal would not change 5 or 10 years down the line.”

One of the winning developers, Ron Moelis, chairman of L&M Development Partners, said, “It’s a big enough site that we can create a community that has all the aspects of what one wants in a neighborhood: a mix of housing, retail, entertainment, food, job training and office space that will serve both low income people who live there and newcomers to the area.”

Mr. Delgado, whose family was forced out of the neighborhood more than 40 years ago, said that the project would not have everything he wanted, but that it had enough.

“I know it’ll never go back to the way it was,” he said. “But I want the right for poor people to live here, too.”

A site plan for the Essex Crossing park along Broome Street between Suffolk and Clinton streets. Rendering by West 8.

A 15,000-square-foot park stretching along Broome Street between Suffolk and Clinton streets will be one of the first projects to break ground in the giant Essex Crossing development, and details of its design were unveiled last night.

After gathering community feedback on initial designs earlier this year, landscape architects West 8 appeared before a Community Board 3 subcommittee to present their latest drawings. The park is expected to begin construction in March 2015 and be completed in two years.

The plan calls for a “relaxing neighborhood amenity with passive uses” that offers a “green oasis in the city,” representatives from the firm told committee members and an audience of citizens gathered in a meeting room at Sara D. Roosevelt Park.

Designers have incorporated comments and concerns they heard at a previous committee meeting in March, as well as a public visioning session held in May after committee members urged the Essex Crossing developers, Delancey Street Associates, to solicit more input from the future park’s neighbors.

The new designs depict a linear park that is 35 percent planted with native species of trees, shrubs and bedding plants, arranged in a way to create individual “coves” that can be used for multiple purposes, said Claire Agre, who gave West 8′s presentation. One of the areas will offer a play space designed especially for children 2 to 5 years old, while another will be anchored by a large, fixed communal table that seats about 10 people.

There is plenty of seating built into the plan: in addition to the large table, there will be smaller, portable tables and chairs, as well as bench seating along the perimeter, both with and without backs.

“One of the most important reasons people come to parks is to sit and look at other people, and to be with other people,” Agre said.

Another fixed component of the park will be a kiosk with rotating exhibits and information about the neighborhood. (An original proposal to have a kiosk serving food and drink has been dropped.)

A rendering of the information and art kiosk in one section of the park. Illustration by West 8.

The park will occupy the northern end of the block bounded by Grand, Suffolk, Broome and Clinton streets, known as Site # 5 in the Essex Crossing development. It is 200 feet wide along Broome Street and 77 feet deep along Suffolk and Clinton. The rest of that block will hold a new commercial building in the southeastern corner, while the southwestern corner has been reserved by the city as a potential future school site.

Still to come — filings for site 2, on the southeast corner of Essex and Delancey streets. That’s the focal point of the whole project – a building that will include a new home for the Essex Street Market as well as a new movie theater complex. Developers are expected to unveil plans for the first four sites in November or December. Construction is scheduled to begin in March of 2015. 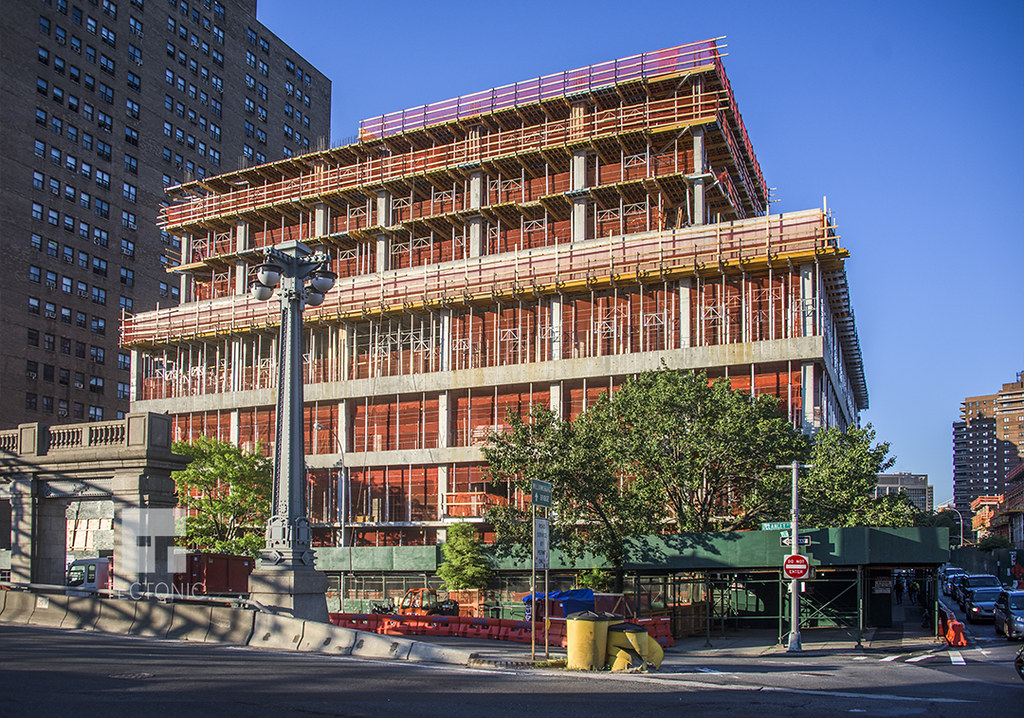 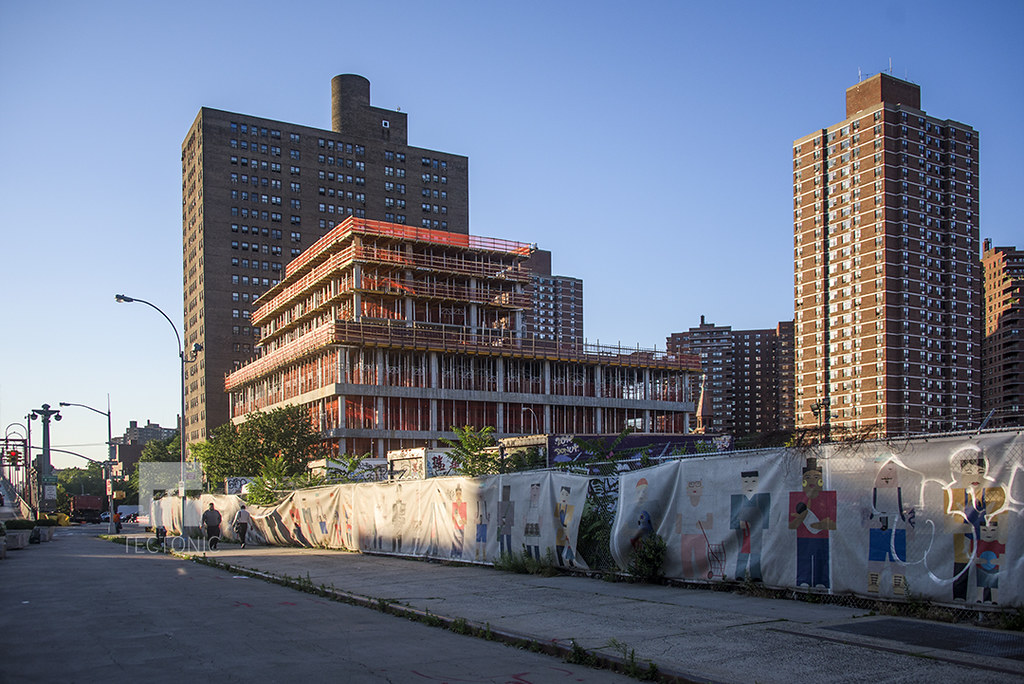 Here are a few recent updates from the Bowery Boogie blog

Can see cranes for Essex Crossing. 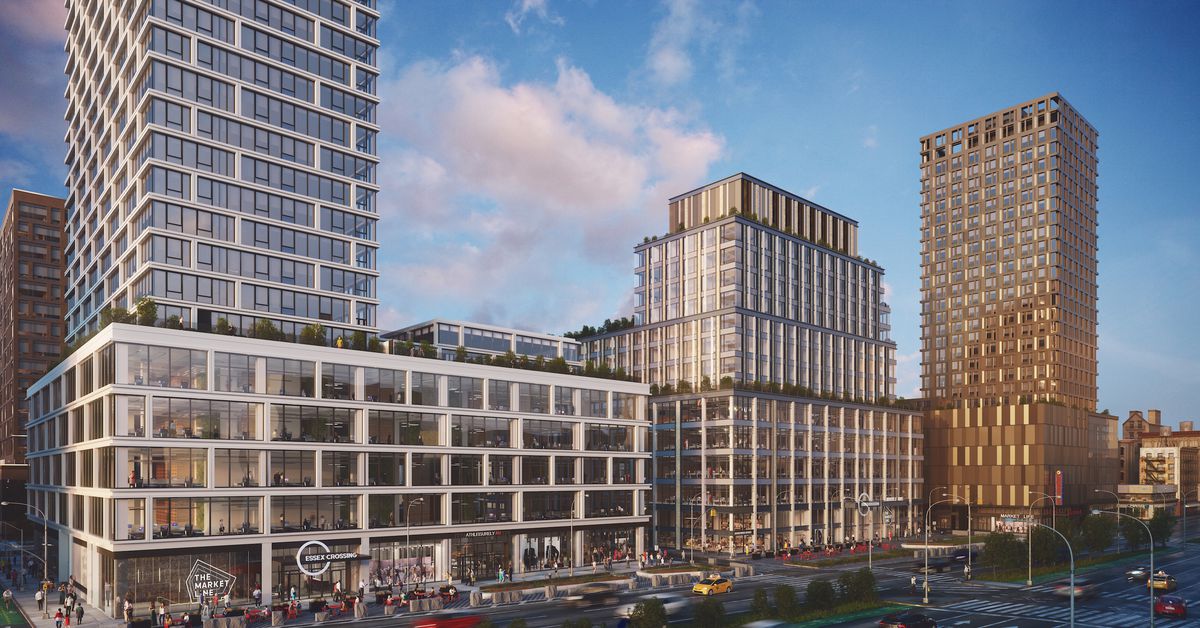 Two new buildings, designed by Handel and CetraRuddy, are revealed in new renderings of the Lower East Side megaproject. 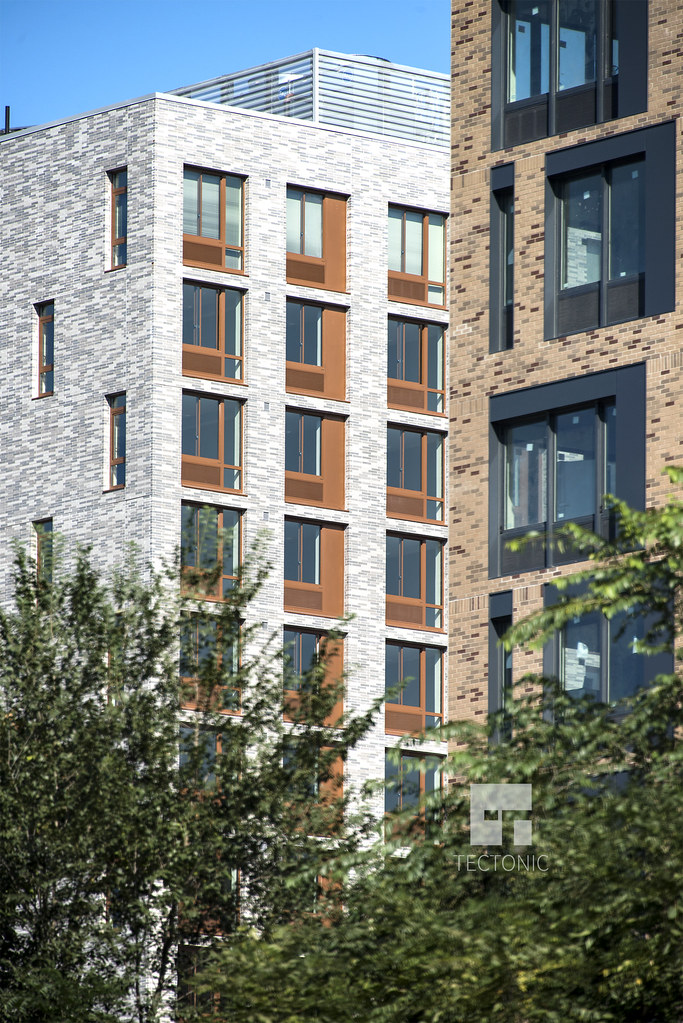 1,5&6 are completed. 2 is topped out, and 4 is gearing up. Still waiting on news for 3. The rest of the sites (8,9 and 10) are small enough that they don’t really warrant their own thread. Is there a building 7? On the masterplan there only seems to be 9 plots. 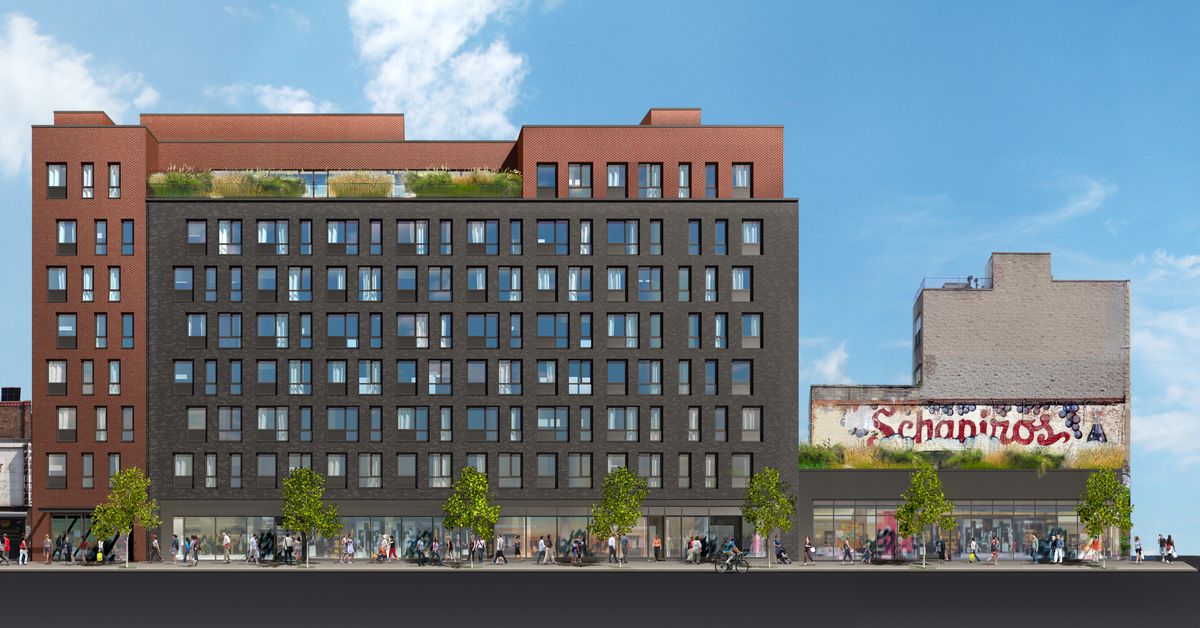 The Beyer Blinder Belle-designed building will bring 92 studios to the Lower East Side. 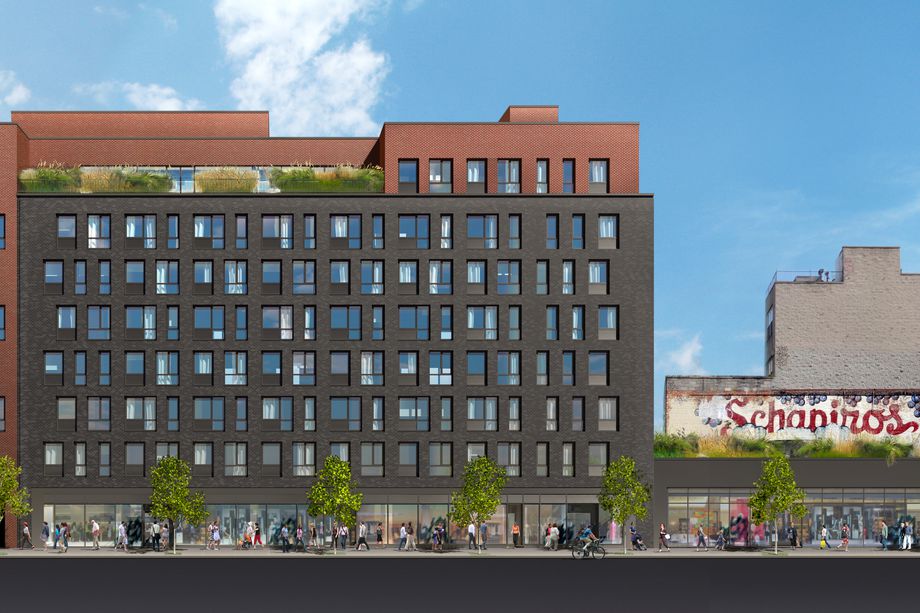 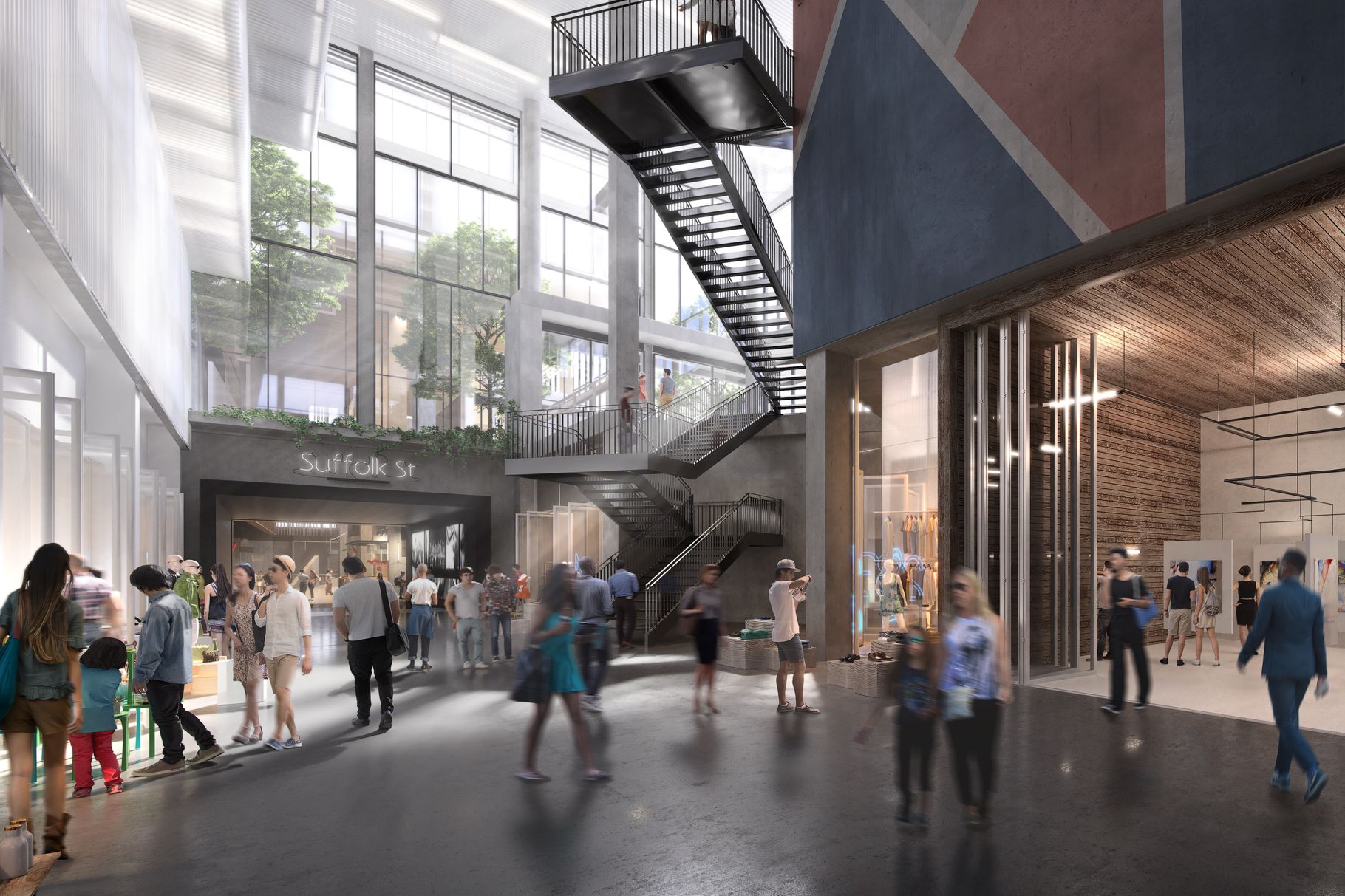 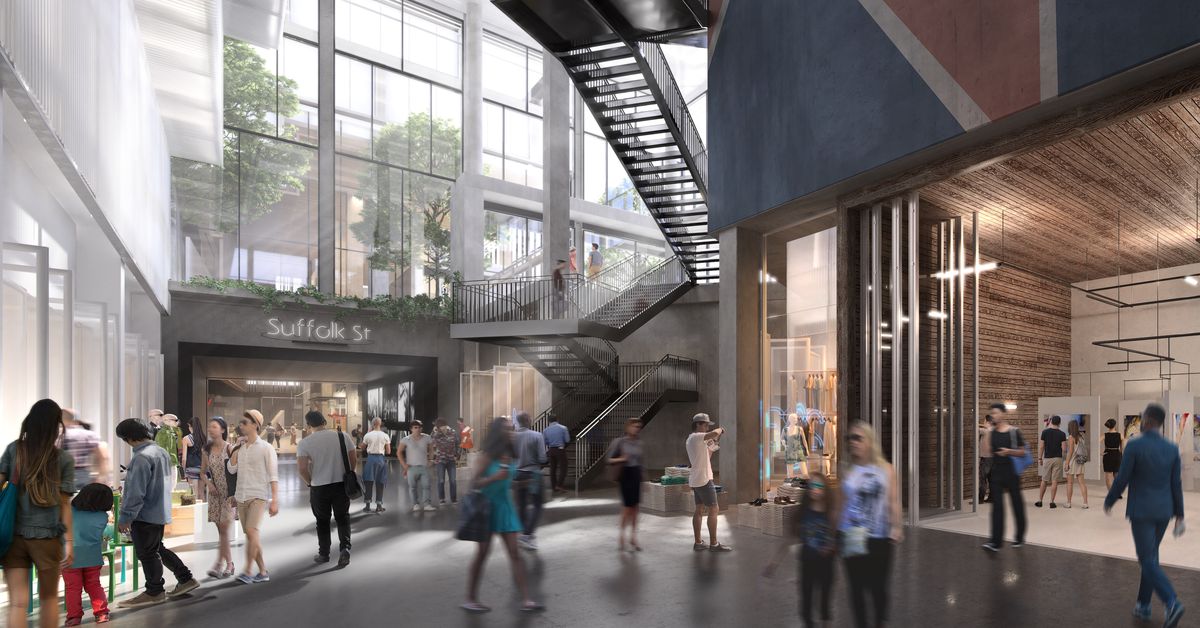 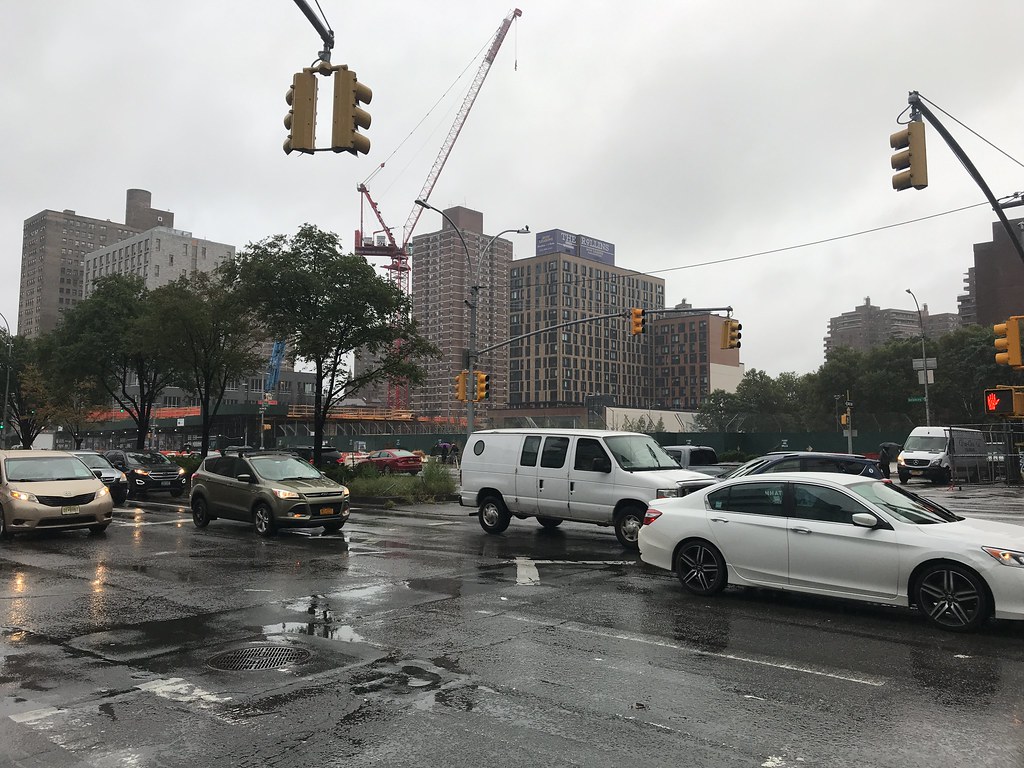 Verizon to the LES.

Verizon inked a deal to open a 143,000-square-foot office at the new Essex Crossing development on the Lower East Side.