After consistent objections from community board and former City Council Speaker, developer drops controversial FAR request and is approved. William Gottlieb Real Estate can now move forward with development of Studio Gang Architects’ “Solar Carve” Tower, a ten-story structure that will occupy 40-56 Tenth Avenue, the full block between West 13th and 14th streets in Manhattan. William Gottlieb originally sought additional floor area to offset prohibitive construction costs resulting from poor subsurface conditions at the site, 10% of which is occupied by the High Line itself. Had the developer’s initial request for an FAR variance been granted, the proposed “Solar Carve” tower would have been 34% larger than allowed for by local zoning requirements.

Prior to the developer’s submission of a fourth amended application, four public hearings took place between September 17, 2013 and February 11, 2014. William Gottlieb consistently argued in the prior applications that uniquely poor soil conditions at the site, in addition to the inconvenience of the High Line’s intersection with the site’s L-shaped lot, would generate exorbitant construction costs, which would, ultimately, undermine the project’s profitability. The developer presented evidence of a gasoline spill stemming from one of Manhattan’s few gas stations, located north of the site at West 14th street, which has caused subsurface contamination necessitating excavation of over 200 tons of soil from the site. Opposing parties argued that the site conditions were not so unique as to deprive the developer of a reasonable rate of return and that, therefore, the developer was able to comply with existing floor area restrictions.

Opposition to Gottlieb’s applications was strong and both State Senator Brad Hoylman and former City Council Speaker Christine Quinn publicly denounced the development plan as did the Greenwich Village Society for Historic Preservation, the Greenwich Village Community Task Force, the nearby Standard Hotel and the owner of the adjacent High Line Building. Manhattan Community Board 2 recommended disapproval of the developer’s initial applications for increased FAR and, at each of the four hearings on the matter, the BSA directed the developer to reduce its request for FAR relief.

After these unsuccessful appeals to the BSA, William Gottlieb submitted an amended application seeking only minor height and setback variances, dropping the FAR request altogether. Community Board 2 nevertheless continued to oppose the application, arguing that the site conditions did not pose a hardship unique to the developer because adjacent developments had cited to the same poor conditions in seeking variances. The BSA, however, disagreed, noting that a finding of uniqueness does not require that the site be the only one impacted by the condition causing hardship, but only that the condition not be typical of neighborhood building sites, lest the granting of multiple variances materially alter the district’s zoning. The BSA went on to suggest that this finding of uniqueness likely precluded a less favorable outcome for the community. The BSA noted that an as-of-right building might have had greater impact on the High Line Building’s site lines than the developer’s amended design, which sets back from the High Line Building by approximately 16 feet. The City, which owns the High Line, decided to exclude it from the landmarked Gansevoort Market Historic District, leaving the sites along the High Line available for construction of developments that may obstruct its views.

Subject to the developer substantially adhering to the architect renderings submitted with its amended application, the BSA granted a variance for construction of the ten-story tower, which will not comply with zoning requirements for rear yard, height and setback or with sky exposure plane regulations. Ultimately, William Gottlieb had originally proposed construction of a 12-story commercial building with a total floor area of 157,280 sq. ft. (6.68 FAR), but the developer will now have to settle on a ten-story building with floor area of 117,705 sq. ft. (5.0 FAR). Completion of the “Solar Carve” design is slated for 2015 and groundbreaking will occur after the Department of Building issues permits for demolition of the two three-story buildings presently occupying the site. 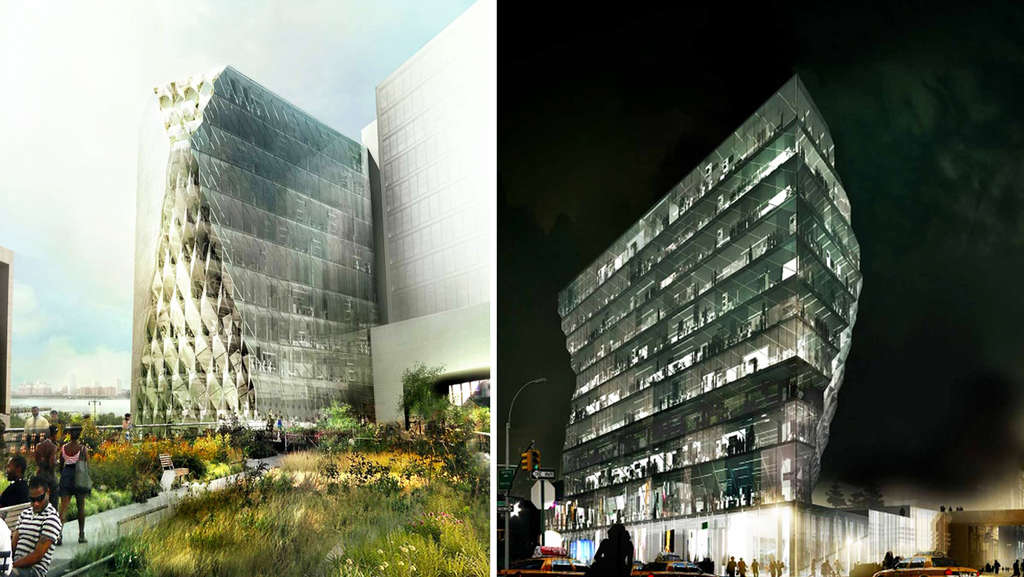 BY: REBECCA BAIRD-REMBA 7:30 AM ON NOVEMBER 9, 2015
Renderings for the futuristic Solar Carve at 40-56 Tenth Avenue first surfaced three years ago, long before the city shot down a variance that would’ve allowed the developer to build bigger on a rather challenging site in Meatpacking. William Gottlieb Real Estate finally got approval for the office tower last year, and last week, they filed new building applications for the project next to the High Line.

The plans don’t tell us much, but they do say the building will top out at 12 stories and 190 feet. It’ll host 116,205 square feet of commercial space, including two floors of retail topped by 10 floors of office space. The second floor will have a terrace, which will presumably be accessible for the office tenants above.

Jeanne Gang’s Studio/Gang Architects, based in Chicago, will still design the project. The shape of the building appears to have changed somewhat, but in general, it looks a bit more traditional and less wedge-shaped.

Originally, Gottlieb had asked the Board of Standards and Appeals if he could build 34% larger than zoning typically allows. At the time, the firm claimed it needed the extra floor area because the site was unusually shaped and the High Line covered 10% of the property. Preservationists opposed the extra bulk, and the BSA ultimately disapproved the application. Gottlieb got a greenlight for the project on its fourth try, by requesting only setback and height modifications.

The site at the corner of 13th Street and 10th Avenue measures 23,541 square feet. It’s still home to a fairly decrepit three-story warehouse, and demolition plans haven’t been filed yet.

Gottlieb is partnering with Aurora Capital Associates to develop the building.

Although Meatpacking is an ideal neighborhood for office development, a combination of landmarking and restrictive zoning make it quite difficult to build or expand office space there. Meanwhile, the city is helping subsidize new office buildings a few avenues east in Union Square, where it just released a request for proposals to redevelop the old P.C. Richards store.

I’m soo looking forward to this!

Me too! Between this, the Zaha, the IAC, the torqued lowrise on Washington, and BIG’s HFZ project, the High Line is getting some stunning projects.

There were some filings this week. Hopefully, this masterpiece will rise soon. 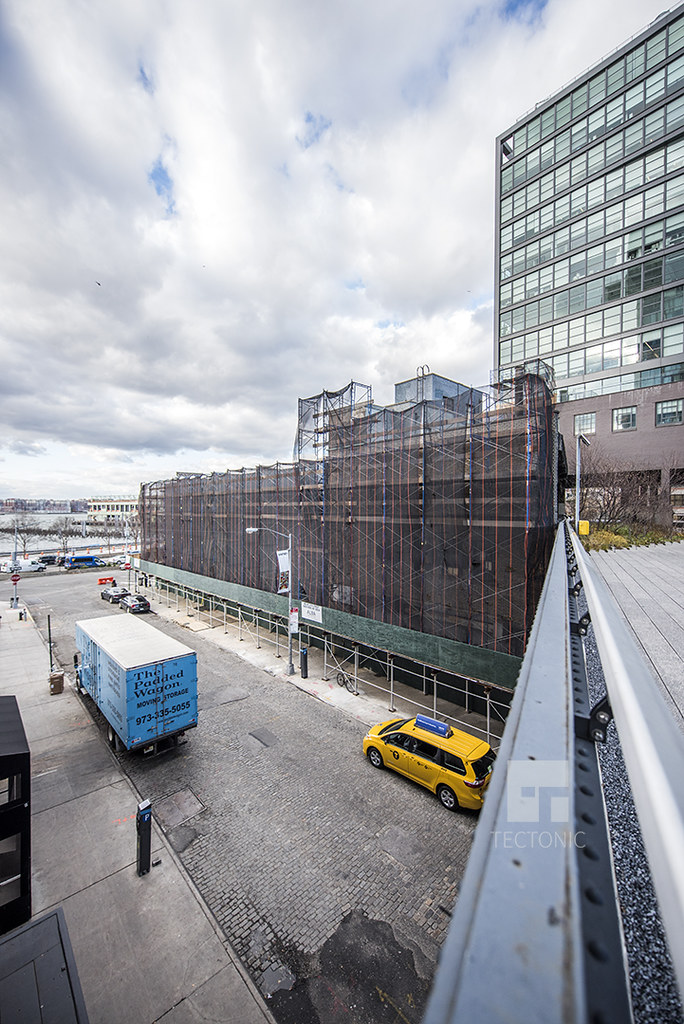 I really look forward to this tower. It’s amazing.

The demo crew were wearing hazmat suits. Must be some real nasty stuff in that old warehouse.

That’s a lot of junk there.

This building will be beautiful. I can’t wait for this building. Solar Carve’s shape derives from the "geometric relationships between the building and the sun's path."

The so-called Solar Carve Tower office building at 40 Tenth Ave. in the Meatpacking District is ready for the light of day. Developers Aurora Capital and William Gottlieb Real Estate have hired Bru…

All that debris is almost cleared. They were still working to take down the other buildings closest to the highline though. So there is still more demo before they can start.

The last building has come down and the entire lot is now almost cleared from demo. Hopefully they will start digging soon