LOWER EAST SIDE — The East River Ferry should expand its route to the Lower East Side and Brooklyn Heights, where additional stops would add a “storm resilient” transportation option while also serving growing waterfront communities and parks, elected officials say.

A dozen local politicians urged the city’s Economic Development Corporation to add East River Ferry stops at Grand Street in Manhattan and at Pier 6 in Brooklyn Bridge Park, according to a letter sent to EDC President Kyle Kimball on Oct. 22.

“These stops increase connectivity between the City’s burgeoning Harbor Park [in the Lower East Side] and build a more resilient transit system for New York’s growing waterfront residential and workforce populations,” the officials wrote.

…The East River Ferry began as a three-year pilot slated that would have ended in June 2014, but the city extended its contract until 2019. In January, the EDC released a preliminary citywide ferry survey that identified potential new stops and additional routes.

Grand Street was identified as one of 11 viable new stops, according to the report. The stop would expand the area’s limited transit infrastructure and connect riders to Citi Bike terminals and the M14 and M21 buses, officials said.

Officials said ferry service would also help visitors access Harbor Park at Pier 42 as well as “resiliency and recreational upgrades” that would be implemented by the “Big U” Rebuild by Design Project, which includes landscaped paths that would lead into East River Park.

Mayor Bill de Blasio will make use of the city’s waterways to expand transportation here, he announced in a State of the City speech that aimed at New York building up housing in coastal neighborhoods.

His administration plans to spend $10-20 million a year to run up to six new ferry routes anchored on Wall Street, by 2018 that touch on each borough; the city runs the free Staten Island Ferry to lower Manhattan.
And the ferries in these neighborhoods, like Soundview in the Bronx and the Rockaways, would cost the same as a MetroCard swipe, the mayor vowed.

“We are the ultimate coastal city but somehow we haven’t had a true ferry system in decades,” de Blasio said. “We need to right this wrong, to open up great possibilities for our people, to take places that were isolated and felt isolated and give them opportunity and connection.”

The ferry routes would bring to fruition a vision of a citywide system that former Mayor Michael Bloomberg had put forward.

“We think the demand is going to be very strong,” said Kyle Kimball, president of the NYC Economic Development Corp., adding that the city will put out a global call for ferry operators.

Ferry service within New York is more expensive for passengers than subway and bus transit and for the city, which subsidizes service to keep down fares. On top of tens of millions it will cost to run the ferry system – estimated to make 4.5 million trips a year the city will also spend $55 million to build the docks and other infrastructure for the initial routes.

“As long as it’s comparable to a bus and subway fare, I think it’s a fair deal,” Lewis said.

By Stephen Miller on Tuesday February 3, 2015 In today’s State of the City address, Mayor de Blasio returned to his signature campaign issues of affordability and equity. Focusing mainly on housing, the mayor outlined a plan for growth centered around transit-accessible neighborhoods, and he recommitted to building several new Bus Rapid Transit routes.
But de Blasio missed the mark with his big new transit initiative — a subsidized ferry system. Dollar for dollar, ferries are just not an effective way to spend public money to improve transit options for low-income New Yorkers.

“If we are going to have affordable housing, how are we going to help people get around? What’s the role of transportation in making sure that people have access to opportunity and connecting to where the jobs are all over the five boroughs?” the mayor asked. “Well, we thought about that.”

De Blasio said rides on the new ferry system will cost no more than a MetroCard swipe when it launches in 2017. The system will receive $55 million from the city and serve neighborhoods including Astoria and the Rockaways in Queens, Red Hook in Brooklyn, and Soundview in the Bronx, according to DNAinfo.

“Ferries will be affordable to everyday New Yorkers, just like our subways and buses,” de Blasio said, adding that the ferries will help revitalize commercial corridors near their outer-borough landings.

This sounds great, until you look at how much ferries cost and how many people they would serve compared to better buses and trains.

Even with fares at $3.50 per ride, running ferries from Pier 11 to the Rockaways last year required a subsidy of nearly $30 per rider, according to the Economic Development Corporation. In part, that was because its limited schedule failed to attract much ridership. The more centrally-located East River Ferry has more ridership and a better schedule, but still had a slightly higher per-rider subsidy than bus service in 2013, on top of its $4 fare [PDF]. Dropping the fare to match the bus and subway would likely require additional subsidies.

[quote]
Construction work on the 19 vessels that will make up New York City’s first citywide ferry system has officially begun, announced Mayor Bill de Blasio along with the New York City Economic Development Corporation (NYCEDC) and ferry operator Hornblower.
The 85-foot long boats are being constructed in two
shipyards, one in Louisiana and the other in Alabama, and will have the capacity to accommodate 150 passengers with storage space for bikes, strollers, and wheelchairs once complete. Roughly 200 full-time
employees are working to get the ships materialized in time for their anticipated early 2017 debut.[/quote]

the citywide ferry is quite popular. 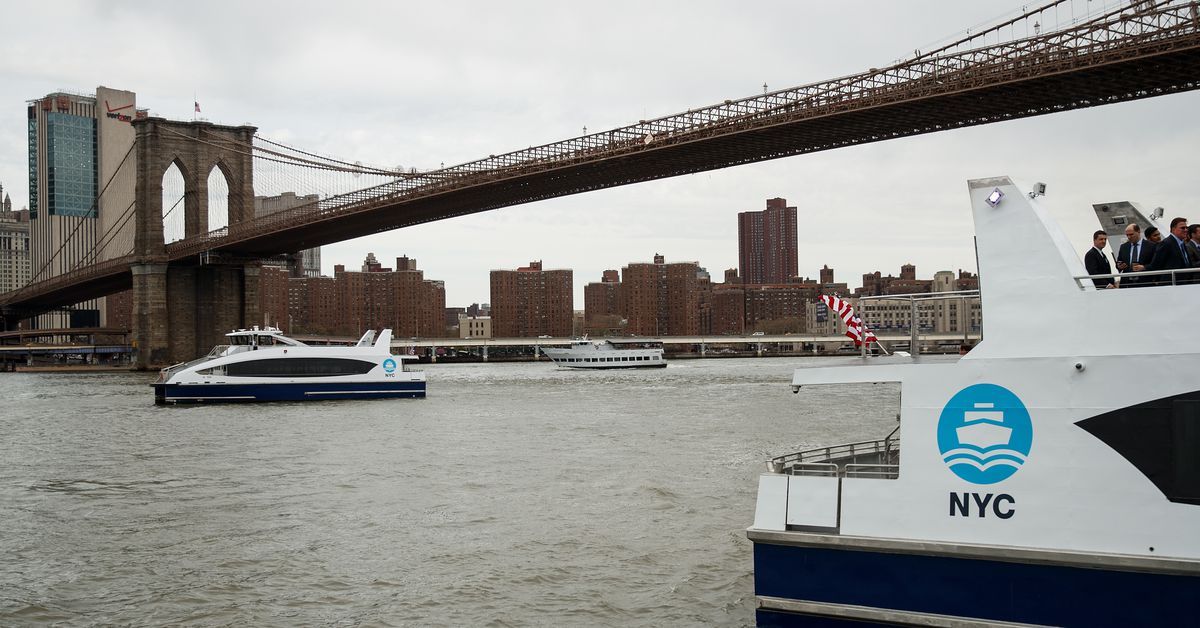 It’s only been six weeks since the citywide ferry’s debut, but the new service is so popular the city has to race to keep up with demand.

The current level of service is a joke, of course. I hope some future politician either shuts this down or makes it actually usable. 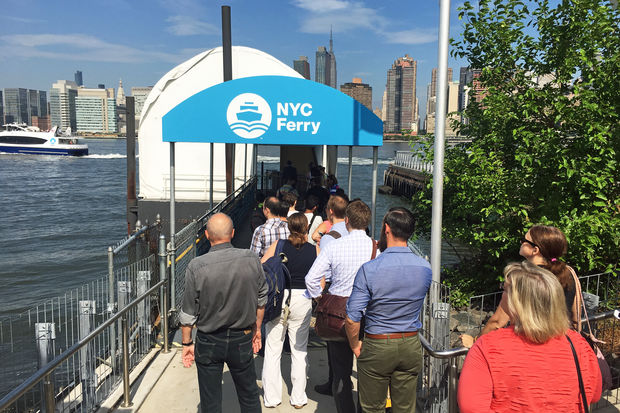 Riders in Long Island City say the boats have been more crowded since NYC Ferry took over on May 1.

That sucks about all the recent issues. I hope they fix everything. The hudson river crossings through ny waterway have always been very good.

July 24, By Christian Murray Mayor Bill de Blasio is expected to come to Long Island City this week to announce the launch of the new Astoria ferry route that is scheduled to begin service on August 29, officials have confirmed.…

Aug. 20, 2020 By Christian Murray Western Queens residents looking to get to the Upper East Side of Manhattan in a hurry will soon be able to take the

I think this is good because it will make it much faster to get from Astoria to Yorkville, which are right across the river from each other. Right now a ferry ride would involve going down to East Thirty-fourth Street and transferring to a Soundview-bound ferry. The MTA options are not great either - taking the N/W to Lex/59th and then an uptown 4/5/6 (which annoyingly are on different levels for local and express) or alternatively, bus M60 across the RFK Bridge to 125th/Lex and then a downtown 4/5/6.

they published the updated system map, which now includes the new Midtown-Staten and Wall Street-Coney Island routes, and the expansion of the Bronx route to Ferry Point, all expected to open next year

The map appears to have a mistake as the South Brooklyn route actually ends in Bay Ridge and not Sunset Park. It’s possible that it will be truncated to Sunset Park after the Coney Island route opens, but that hasn’t happened yet.

It will also be interesting how the Ferry Point ferry landing is integrated into existing infrastructure, as there’s not much in Ferry Point other than the Trump Links golf course, no bus routes go there and it’s not close to any residential areas.

Mayor Bill de Blasio joined community leaders in Astoria, Queens, on Friday for a ride on NYC Ferry's new extension from Astoria to the Upper East Side.

This is for the Saint George-Battery Park City-Midtown West route.

The service is expected to launch in summer 2021, according to the NYC Economic Development Corporation.

Despite a pandemic ridership plummet and city budget woes, boats remain on course for route expansions to Staten Island, Manhattan’s west side and Coney Island — with a torrent of additional funding from the NYC Economic Development Corporation.

The southern Williamsburg NYC Ferry stop on Kent Avenue will be closed for a $6.7 million overhaul at the end of March.