No tears were shed in Astoria over a reported decision by the Metropolitan Transportation Authority (MTA) to derail the plan for extending the N train to LaGuardia Airport linking the airport with Manhattan.

In fact, considering the long and strong united opposition to the proposal in the Astoria community, the MTA had to be as pleased as everyone else that the plan fell through.

Assemblymember Michael Gianaris commenting on the unexpected development said the plan “belonged on the back burner where they put it.”

City Councilmember Peter Vallone Jr. took the news as a great victory for the community and was glad the TA finally saw the light and scuttled the proposal.

Community Board 1 District Manager George Delis vowed to fight the planned extension “as hard as we can as long as we have to in case the MTA revives it.”

Although there were mixed feelings about the need for a rapid transit connection from Manhattan to LaGuardia, there was some support expressed for alternate proposals previously considered as routes to the airport.

The unexpected word on the plan’s demise came on Monday in the Daily News. A story said that the emergence of several major and high-cost transit plans had forced the MTA to drop the Manhattan-to-LaGuardia proposal, which was strongly supported by former Mayor Rudy Giuliani, and former Borough President Claire Shulman.

The story said $17 million had been spent on planning, and another $645 million set aside in the MTA budget would stay there, earmarked for the abandoned plan but barred from use in any other project.

MTA Chairman Peter Kalikow was quoted as saying of the plan, “It hasn’t gone away, but it’s slid.”

Reviewing the background of the LaGuardia connection plan, Gianaris recalled, “The community studied and recommended many options [about 20] but they were all ignored by the MTA.” The one most favored by the community and elected representatives was the No. 7 train connection from Willets Point near Shea Stadium to the airport, Gianaris said.

“That went through industrial areas, not residential communities like the N train, and came into the back of the airport,” Gianaris said. “It was ideal.”

Asked if he felt there was a great need for a transit connection into LaGuardia, Gianaris (D–Astoria) said, “I can understand the need for it.” However, he said, he doubted very much that a businessman in Manhattan would suffer the inconvenience of a train ride as opposed to a taxi ride.

Vallone said the MTA must finally have realized that extending 19th century technology through the heat of a vibrant neighborhood to get to the airport was not a good idea.

The airport gets a Select Bus Service line for now.

M60 SBS service will begin in Spring 2014. The overall goals of the project are to speed buses and increase reliability, improve safety for all corridor users, and support overall community needs. Upgrades on the M60 Select Bus Service include off board fare collection, dedicated bus lanes on 125th Street between Lenox Avenue and 2nd Avenue, limited stops, and transit signal priority. The bus lanes on 125th Street will improve speed and reliability on all 125th Street buses.

Improvements to curb regulations on 125th Street will reduce the amount of double parking along the corridor by increasing parking turnover and providing space for commercial vehicle loading. SBS improvements will also benefit riders taking the M60 to the LaGuardia Airport. From end-to-end, the proposed service would be 10-15% faster than the current M60 route, and 15-20% faster from 125th/Lexington Avenue to LaGuardia Airport.

No wonder we are falling behind the rest of the world. Common sense infrastructure projects being blocked? 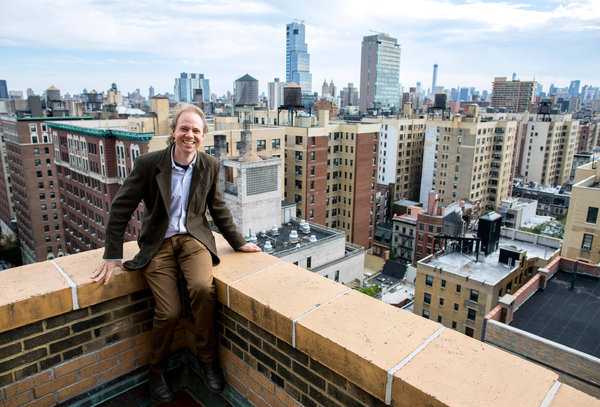 Mr. Venturi has an idea to transform La Guardia Airport, in part by using defunct transit infrastructure, including a railway line in the Bronx. Credit Brian Harkin for The New York Times

To solve La Guardia’s problems, Mr. Venturi decided, it wasn’t enough to annex Rikers. On the advice of a friend, the architect Henry Smith-Miller, he began to look at the Bronx. The industrial Port Morris neighborhood, with its sewage treatment plant and assorted warehouses, was just across the river from the jails and had access to Amtrak, Metro-North and subway lines, including the abandoned rail tracks west to Spuyten Duyvil. It was ripe for the taking, Mr. Venturi thought.

…So he let his imagination go: Why not build a massive, 22-track rail station and airport terminal in Port Morris, and put the gates on Rikers — connected by a shuttle train, as at the airports in Atlanta and Denver? The present La Guardia space could then accommodate four runways instead of the current two, with extensions into the East River to lengthen them.

The longer runways would enable international flights and reduce weather delays, Mr. Venturi said. And the Bronx terminal would make the airport accessible by mass transit — subways, commuter trains and a ferry.

It was a big idea, but Mr. Venturi was not done.

“Part of this project is, there’s a social, moral, what-kind-of-New-York-do-we-want element to it,” he said. The kind of New York he wanted, he said, was one that was connected.

Poring over old and new subway and train maps, he began to look at Penn Station and the rail yards in the Sunnyside neighborhood of Queens — both places that had a lot of subways and rail lines.

Why not make another transit hub in Sunnyside, joining the subways that already stop there — the E, M, N, R, Q and 7 trains — with new connections to Metro-North, Amtrak, the Long Island Railroad and New Jersey Transit? The rail lines could continue to Penn Station in one direction, and up to the new La Guardia superstation in the other. (He’d extend the new Second Avenue subway up there as well.) “It would connect the boroughs with each other and with the suburbs,” Mr. Venturi said.

At the same time, he proposed moving the unsightly Sunnyside train yards up to Port Morris, near the airport, and building a massive convention center over them to replace the Javits center.

On the old Sunnyside site, he would build a 300-acre park. The park and transit station, he said, would draw developers — office towers, apartment buildings, restaurants — creating a real downtown Queens to compete with Manhattan or Brooklyn. 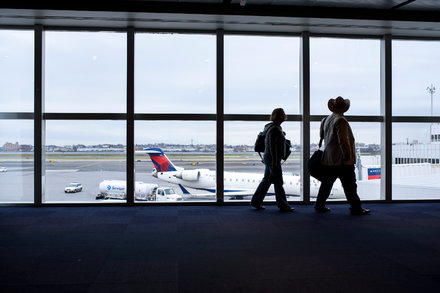 The train, which would connect with the No. 7 subway line and the Long Island Rail Road, would be the first mass transit link to the Queens airport.

The proposed train would curve along the Grand Central Parkway for one and a half miles before connecting with the No. 7 subway line and the Long Island Rail Road at an expanded terminal in Queens, alongside Citi Field and the National Tennis Center.

Similar in design to the rail lines used to reach Kennedy International Airport and Newark Liberty International Airport, the elevated train would cost about $450 million to build, the governor’s office said, a relative pittance compared with a cost of $1 billion per mile or more for new subway lines.

It is an ambitious, Robert Moses-style proposal from a governor determined to leave an imprint in his second term, although major elements remained to be worked out. When the train would start operating, for one, is far from certain.

“I would not venture a guess to the timing,” Mr. Cuomo said, shortly after unveiling his plan at a breakfast speech in Midtown Manhattan. A spokeswoman later clarified that once construction began, the project would take about five years to finish. 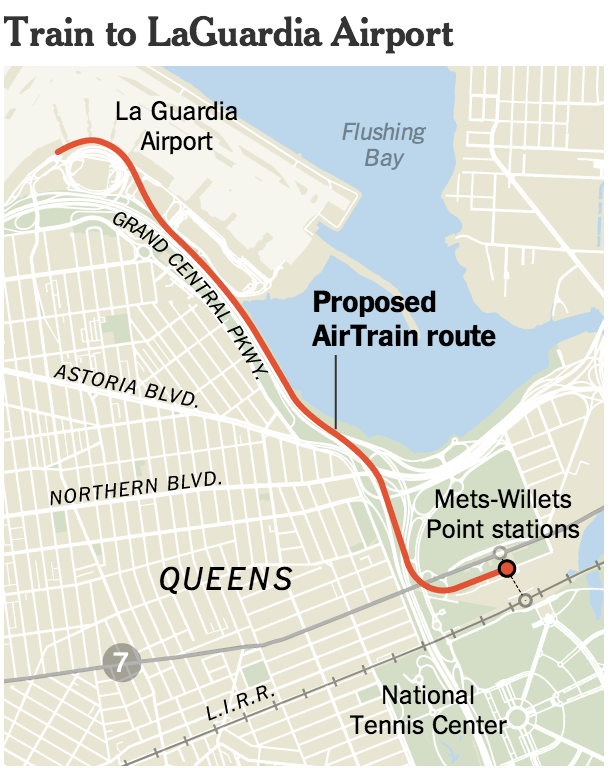 The cost of building a transit link to LaGuardia Airport could be nearly twice what the governor estimated.

MTA chief Tom Prendergast told lawmakers in Albany on Thursday that linking LaGuardia Airport to the No. 7 line at Willets Point with an AirTrain that Gov. Andrew Cuomo said would cost $450 million could actually cost closer to $1 billion.

Beth DeFalco, a spokeswoman for Cuomo, said that the governor’s figure – announced during a major speech part of his 2015 Opportunity Agenda – was a “cost estimate for the project as we enter the design phase.”

She noted that Prendergast told reporters after testifying to the state Senate’s transportation committee that “there is a range of estimates.”

“So when the governor said $450 million, that’s what we are working on doing,” Prendergast said, according to DeFalco.

July 29, 2020 By Allie Griffin Rep. Alexandria Ocasio-Cortez has come out against the plan to build a $2 billion AirTrain to LaGuardia Airport and said she does not want the federal government to allocate COVID-19 relief funds to support the project....

She’s a supporter of the New Green Deal but is against mass transit. Typical progressive hypocrisy.

Why the LaGuardia AirTrain may not fly

The Federal Aviation Administration posted the draft environmental impact statement for the proposed LaGuardia Airport AirTrain on Aug. 21. At the end of the day, this may be a fruitless exercise, alo

Still don’t get why this runs away from the city core.

QUEENS — The long-planned LaGuardia AirTrain is on track to become a reality.  Federal Aviation Administration officials have issued the final environmental impact statement. After reviews, c…

Community groups and some members of Congress have raised concerns about the environmental impact.

nope, we should just build this entirely new 8bn airport and tell everyone they still have to take busses and cabs.

Don’t knock the bus. It only takes 10 to 15 minutes to get to the airport from 74th street station.