THE BRONX IS BUILDING

FXFOWLE designs La Central, a mixed-use and mixed-income development in the South Bronx.

In the final weeks of the Bloomberg Administration, FXFOWLE was selected to design a one-million-square-foot, mixed-income, mixed-use complex in the South Bronx. A few months later, the firm is finalizing plans for La Central, a project it hopes will build on the successes of Via Verde, a similar affordable development built nearby. It is an ambitious undertaking for FXFOWLE. The firm is not just designing a building, it is attempting to create a neighborhood.

“Via Verde is at the large end of a singular building and we’re at the small end of building a whole neighborhood,” said Dan Kaplan, a senior partner at FXFOWLE. The $345-million project includes 985 units of mixed-income affordable housing, 40,000 square feet of retail, a 50,000-square-foot YMCA, a skate park, green roofs, and a recording studio. The tallest tower also includes a telescope for Bronx High School of Science students.

Kaplan described the firm’s design for La Central as a London terrace that has been broken apart. “We took the super-block and sort of wrapped it in a masonry jacket,” he explained. “Then cut holes in it and revealed a sort of lighter, more luminous inside.” La Central’s interior courtyards will be wrapped in metal panels and Future Green Studio will design the interior landscaping.

The building’s brick exterior is punctuated by vegetated highlights at different elevations: green-screens rise at the street level and trees grow out of rooftop terraces.

Wile the design for La Central is not as colorful as Via Verde, the new project borrows—and builds upon—its predecessor’s programming, which promotes green and healthy lifestyles. All five of La Central’s buildings are topped with photovoltaic panels and green roofs that are accessible to tenants. The project also features an outdoor play area for children and a massive south-facing deck where GROW NY will teach community members about urban agriculture. Kaplan said the site’s programming is intended for both the tenants of the property as well as the surrounding community.

In terms of housing, La Central is geared toward families: nearly 50 percent of the affordable units will have at least two bedrooms. But unlike Via Verde, individuals at La Central will not have the opportunity to buy their homes—all of the nearly 1,000 affordable apartments are slated to be rentals. Kaplan said this could possibly change down the road.

La Central consists of two-phases. Construction is expected to start in the latter half of 2015. A month after local officials defeated what was designed to be a trailblazing private development in Inwood, Mayor Bill de Blasio's administration can

La Central in Melrose will bring 992 apartments to the neighborhood

More details on the project:

High res rendering. Much more detailed than the older aerial rendering. Looks like the facade changed as well. 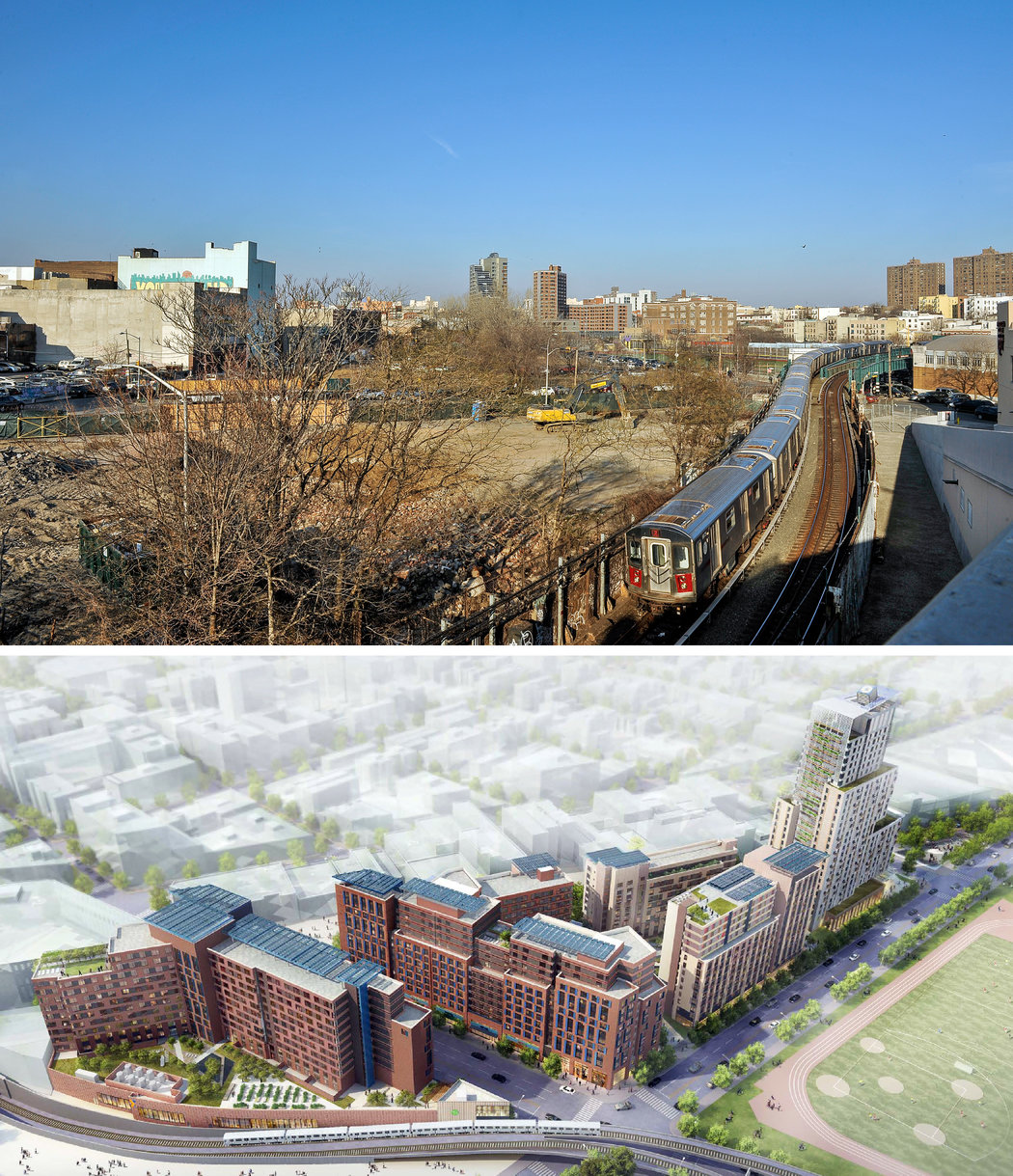 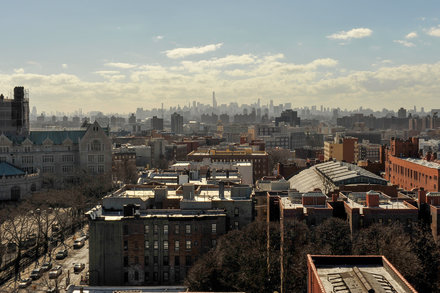 The Bronx Is Building

Thousands of affordable rental apartments are planned or are under construction in the Bronx, some with perks like rooftop farms and concert halls.

I hope those are solar panels on top and not some form of elaborate sun shading because i cant tell what they are from that angle, also more green roofs would be nice but overall this will be a good project. 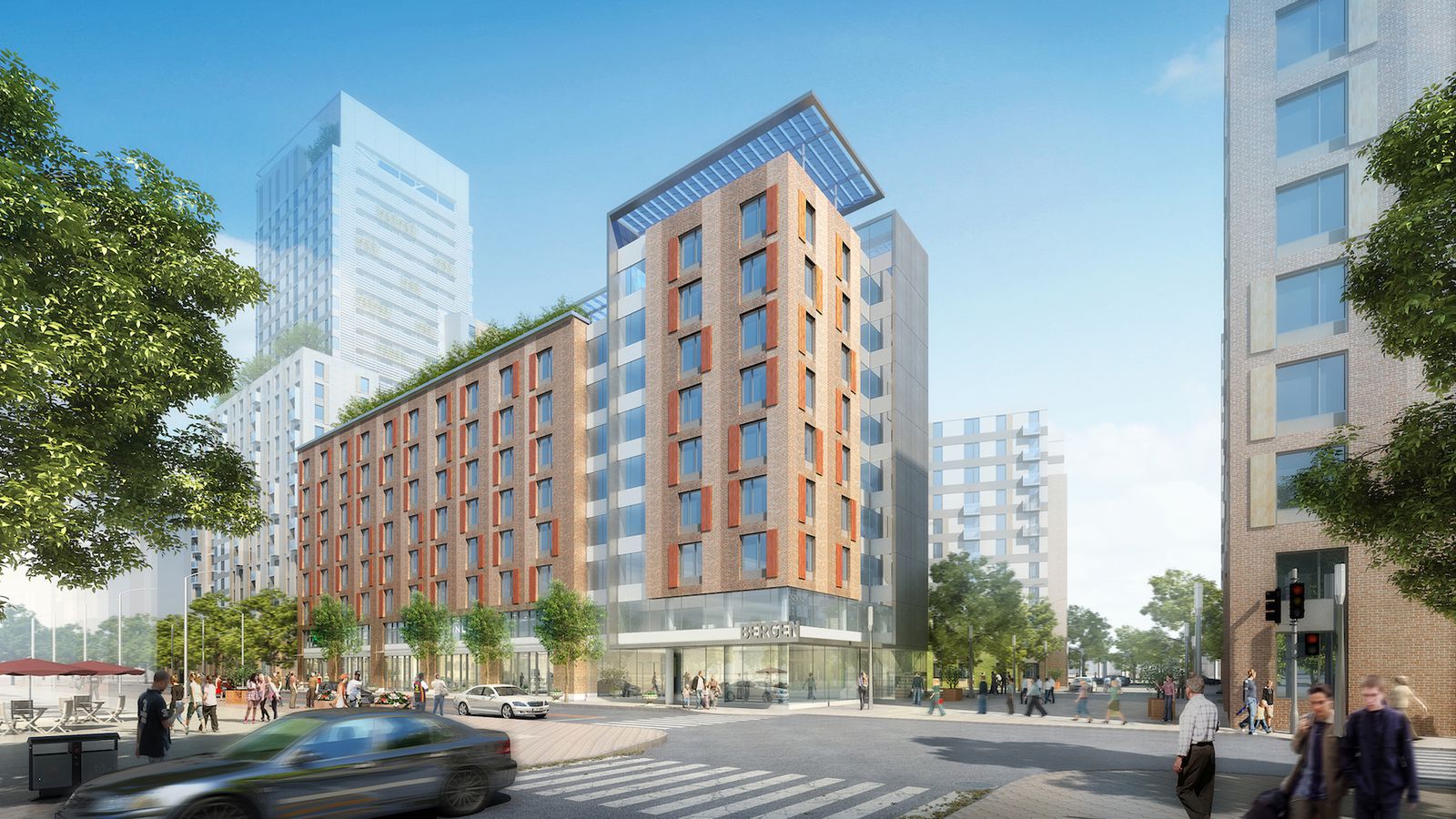 Located in Melrose, this project will eventually bring 992 apartments to the neighborhood. Work officially began Monday, July 24, on 160 units of supportive housing, 96 units of which will be set aside for adults with HIV/AIDS and formerly homeless veterans in the La Central multiuse development in Melrose.

Credit to mrnyc over in ssp. Construction has now begun on phase two of The Bronx’s new 1.2 million-square-foot mixed-use development, La Central. This installment to the not part of La Central, but a neighbor

Starwood Capital and AB Capstone have landed a $51 million construction loan for the development of 425 Westchester Avenue in the Bronx.

The 10-story, mixed-use property will be anchored by a charter school that’s operated by Zeta Charter Schools . The building sits directly opposite La Central , a 992-unit affordable housing development owned by Related Companies and Hudson Companies .

The rest of the building will house office and ground-floor retail space. Starwood and AB Capstone are currently negotiating with a non-profit organization interested in leasing the office space in its entirety.

Another Office Tower is Coming to The Hub - Welcome2TheBronx™

Plans for a new 13-story office tower in Melrose at The Hub have been revealed. Currently an empty lot at 631 Bergen Avenue and East 152nd Street,

Lottery opens for 500 affordable apartments at La Central complex in the...

The new tenants include a community-based café, a sit-down Mexican restaurant co-located with a slice shop, an organic grocer, as well as an operator for the 135-space on-site parking garage.

The leases, totaling 6,710 s/f and 36,904 square feet for the parking garage. “At a time when the entire city is struggling, the strong interest in La Central is a testament not only to the vibrant Melrose neighborhood but to The Bronx as a whole,” said Aaron Koffman, Principal of the Hudson Companies.

La Central, a development that will yield nearly 500 new affordable apartments to the South Bronx, a state-of-the-art YMCA and a BronxNet studio, held a ribbon cutting on June 16 for Buildings A and B.

The ceremony was hosted by the project’s development team, which is a partnership between The Hudson Companies, BRP Companies, ELH-TKC, Breaking Ground and Comunilife.

“A recovery for all of us requires investing in more and better housing so New Yorkers from all walks of life have an affordable place to call home,” Mayor Bill de Blasio said. “I’m thrilled for the residents of the South Bronx and look forward to the positive impact La Central will have on the community.”

Located at 556 and 600 Bergen Ave., the two buildings will bring 494 units of affordable housing to Melrose. Apartments at La Central range from studios to four-bedrooms and are affordable to residents earning between 30% and 130% of Area Median Income (AMI.)

Half of all apartments are earmarked for residents of Community Board 1, which includes the south Bronx neighborhoods of Mott Haven, Melrose and Port Morris. Additional apartments are set aside for municipal employees as well as disabled applicants.

Together the three phases of La Central comprise five individual buildings, which will include 992 affordable residences; a fully programmed interior landscaped courtyard; 80,000 square feet of community facility space; a public park; 45,000 square feet of retail and a roof-mounted telescope to be controlled by the Bronx High School of Science.

626 Bergen Ave., the first building completed at La Central and developed by Breaking Ground and Comunilife, opened in the summer of 2019 and created 161 apartments for formerly homeless veterans and New Yorkers with special needs as well as low-income residents. The final phase is expected to be completed in 2023 and will contain approximately 350 affordable apartments at a range of income levels.