A rendering of the new international extension at Terminal 5 at JFK. JetBlue Airway

JetBlue Airways opened an international arrivals hall extension to its home at Terminal 5 at New York’s John F. Kennedy International Airport on Wednesday. The new addition, which cost the airline $200 million, allows JetBlue’s international passengers to go through customs and make connections in the same terminal – and features JetBlue’s signature sleek look, including glass walls and upcoming amenities like an interactive “Science, Technology, Engineering and Math” children’s area to debut later this year.

JetBlue isn’t the first airline to help upgrade New York area airports, which have earned a reputation for being sorely behind the rest of the world when it comes to amenities and basic facilities. New York is one of the largest airline markets in the world, and it seems that airlines have taken on the role of helping bring its airport facilities into the 21st century.

…But the airlines have already been upgrading New York airports. In 2013, Delta Air Lines spent $160 million to make over its terminals at LaGuardia; now passengers can access complimentary iPads throughout the terminal to surf the Web, order food and check flight status. Delta also unveiled a $1.4 billion international terminal at JFK last year that includes a giant Sky Club for its elite passengers, featuring a rooftop deck.

United recently announced a $120 million makeover of of its hub at Terminal C at Newark Liberty International Airport that will add 10,000 outlets and USB interfaces to the terminal seating as well as 6,000 iPads for traveler use.

These improvements are necessary, airline analyst Henry Harteveldt told USA Today. "New York is the most competitive and most prestigious airline market in the country, and perhaps, the world.

“The growing volume of long-haul international flights at other U.S. gateways increases the competitive pressure on New York to make sure its airports can deliver efficient, pleasant experiences or the region risks losing those passengers.”

…"JetBlue’s Terminal at JFK is state of the art, and its international expansion only improves it,’’ Sitt said. “That’s the kind of 21st century experience, and leadership, that all 112 million passengers at New York area airports deserve, and the kind that’s been lacking for too long. But we cannot forget that there are other critical fixes, like the long overdue overhaul of LaGuardia’s Central Terminal and the modernization of Terminal A at Newark, that must be completed for our airports to truly see a renaissance.”

International visitors have driven the city’s economic recovery—but will they keep coming?

http://www.city-journal.org/assets/images/24_4-ng.jpg
Foreigners make up only 21 percent of the city’s tourists, but they spend more than American visitors. ANDREW LICHTENSTEIN/CORBIS

Growth in foreign tourism over the past half-decade has propelled the city’s economic recovery, allowing it to regain the jobs it lost during the recession three years before the nation managed the same feat. Tourism’s robust growth, though, poses infrastructural and economic challenges. And New York must beware of focusing so much on tourism that it loses sight of what most of the visitors are actually coming to see—not a concrete Disneyworld but a flourishing, unique, well-run modern metropolis.

Can tourism keep expanding in the city? For it to happen, New York must beef up its infrastructure. The rising number of long-haul flights is straining capacity at the airports. Straube of Flying Food notes that the only time airlines can add flights is in the middle of the day; coveted early-morning and evening slots are gone. “The planes line up on the tarmac from 5 PM to 10 PM,” he says. As a sweltering border guard told me in a packed immigrations hall at JFK, the terminal “was built for one flight an hour. Now we have three.” Easing the crunch will require new runways and bigger terminals, says Stephen Sigmund, executive director of the Global Gateway Alliance, an advocacy group for improved airports—but greater efficiency, too.

Airports and airlines have developed a better plane-navigation system to space planes more closely at JFK, for example, but it’s hard to get the airport to use the technology, in part because of neighborhood opposition to more low-flying planes.

Another obstacle to tourism growth is the lousy ground transportation to and from JFK. The decade-old AirTrain, which drops people off at Jamaica’s Long Island Rail Road station for a 35-minute ride into midtown Manhattan, is better than nothing, but it’s a far cry from what other world-class cities such as London and Paris offer: a direct trip, right into an urban center. And the transportation infrastructure matters to the tourism industry in other ways.

“Getting your employees to work at a reasonable price” and on time “is really important,” says the Marriott’s Stengel. Delays and fare hikes cause headaches for employers as well as workers. Workers come from “Queens, Brooklyn, Staten Island, and New Jersey; it’s just as important as getting tourists” in, he maintains. Getting raw-ingredients deliveries into JFK via the clogged Van Wyck Expressway is a major challenge, even with a schedule from 3 AM to noon to avoid the heaviest traffic, Straube says.

Hey nearmap, thanks for joining!

A federal appeals court in Manhattan has dismissed a lawsuit by a group of Queens residents seeking to stop a runway expansion at Kennedy Airport. (Credit: Google Earth)

A federal appeals court in Manhattan has dismissed a lawsuit by a group of Queens residents seeking to stop a runway expansion at Kennedy Airport, saying their objections were unfounded or without merit.

The Eastern Queens Alliance, a coalition of civic groups representing thousands of residents of southeastern Queens, said the Port Authority’s ongoing project to widen Runway 4L/22R and construct 728 feet of new pavement on the north end would put departing and arriving airplanes closer to homes, schools, churches and businesses. The coalition said jets taking off and landing would undoubtedly bring more noise and air pollution to neighborhoods already inundated with them.
In its lawsuit, the Eastern Queens Alliance alleged that the Federal Aviation Administration, which reviewed and approved the Port Authority’s plan, was wrong to conclude that the project would not have a significant impact on the surrounding communities and to decline to conduct an environmental impact statement.

The three-judge panel of the Second Circuit Court of Appeals issued its decision Dec. 23, five days after the attorneys for the coalition, the Port Authority and the FAA went to court.

“We understand the concerns expressed by members of certain communities near the airport,” the judges wrote. “Each of EQA’s objections, however, was either forfeited because it was not brought to the agency’s attention during the public comment period . . . or is unfounded based on our review of the record.” 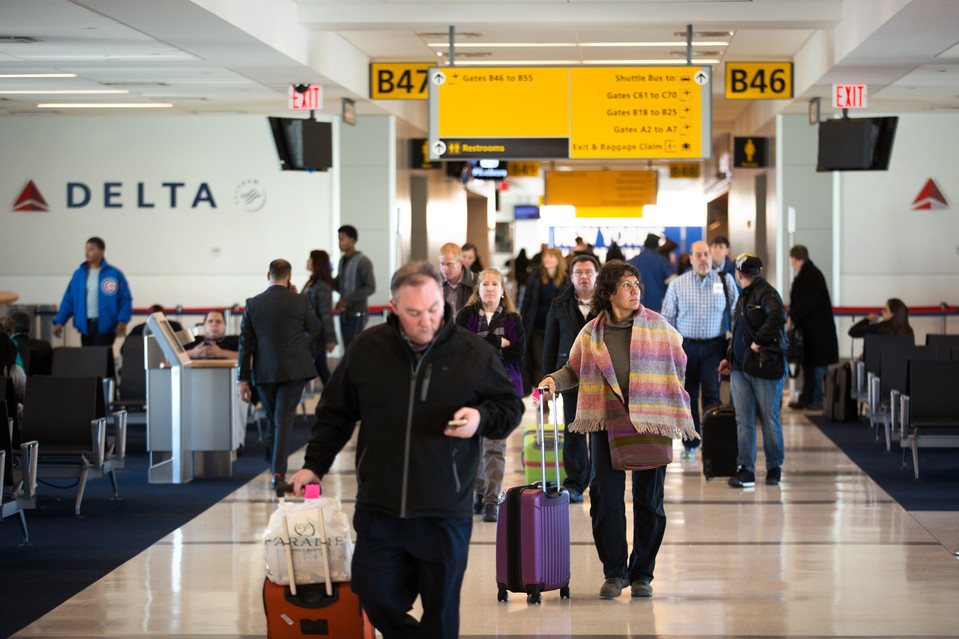 Delta added 11 new gates and 75,000 square feet of space to Terminal 4. This follows a $1.2 billion Delta upgrade of its facilities at the terminal completed in May 2013.

The latest expansion at JFK will enable Delta to relocate about 80% of its domestic “Delta Connection” flights from Terminals 2 to 4 in order to give passengers “a better experience,” said Gail Grimmett, a Delta senior vice president.

JFK, in Queens, is now the airline’s second-biggest hub after Atlanta and it plans to make further investments at the airport, Ms. Grimmett said.

“New York is the most competitive market in the world and…the gateway to the world,” she said. “Our commitment to be New York’s No. 1 is very significant and there’s investment that goes with that.” 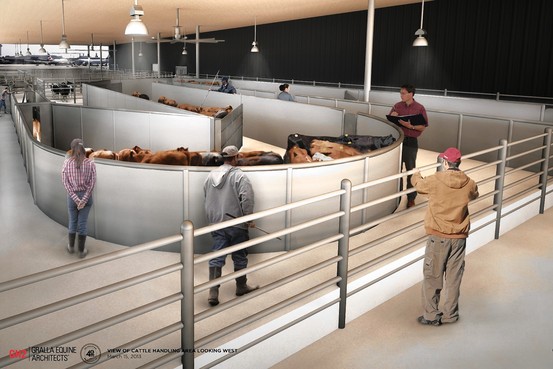 A roundup of commercial property news from across the tri-state region.

ARK Development LLC has signed a 30-year lease with the Port Authority of New York and New Jersey to develop a $48 million animal handling facility, which will provide medical services and temporary accommodations for thoroughbred racehorses, livestock and exotic and common pets that are traveling through the airport.

The 178,000-square-foot property will be the world’s only privately owned airport animal handling facility and is scheduled to open in the first quarter of 2016. It is expected to create more than 180 jobs and generate $108 million in revenue for the Port Authority over the 30-year lease.

It will be built at JFK’s Cargo Building 78, which has been vacant for nearly 10 years, according to the Port Authority. The center also includes 14.4 acres of surrounding open space for planes.

The lease is a culmination of more than three years of negotiations and research, a process including government agencies, private and public financing and designers specializing in work for animals, said John Cuticelli, Jr, chairman of Racebrook Capital Advisors LLC, the parent company of ARK Development.

“This process has been looked at by many different people in many different ways, but no one’s ever gotten around to doing it. To bring the public and private enterprises together—that is what has taken three years,” said Dr. Aaron Perl, managing director and general counsel at Racebrook.

Consolidated Aviation Services, an air cargo ground handler, is subleasing about half of the facility and handling non-animal cargo in the building. Paradise 4 Paws, a pet service center for cats and dogs, also is opening a 20,000-square-foot facility in the building.

The center will be a larger, modern replacement for Vetport, an animal handling facility at JFK that closed at the end of last year. 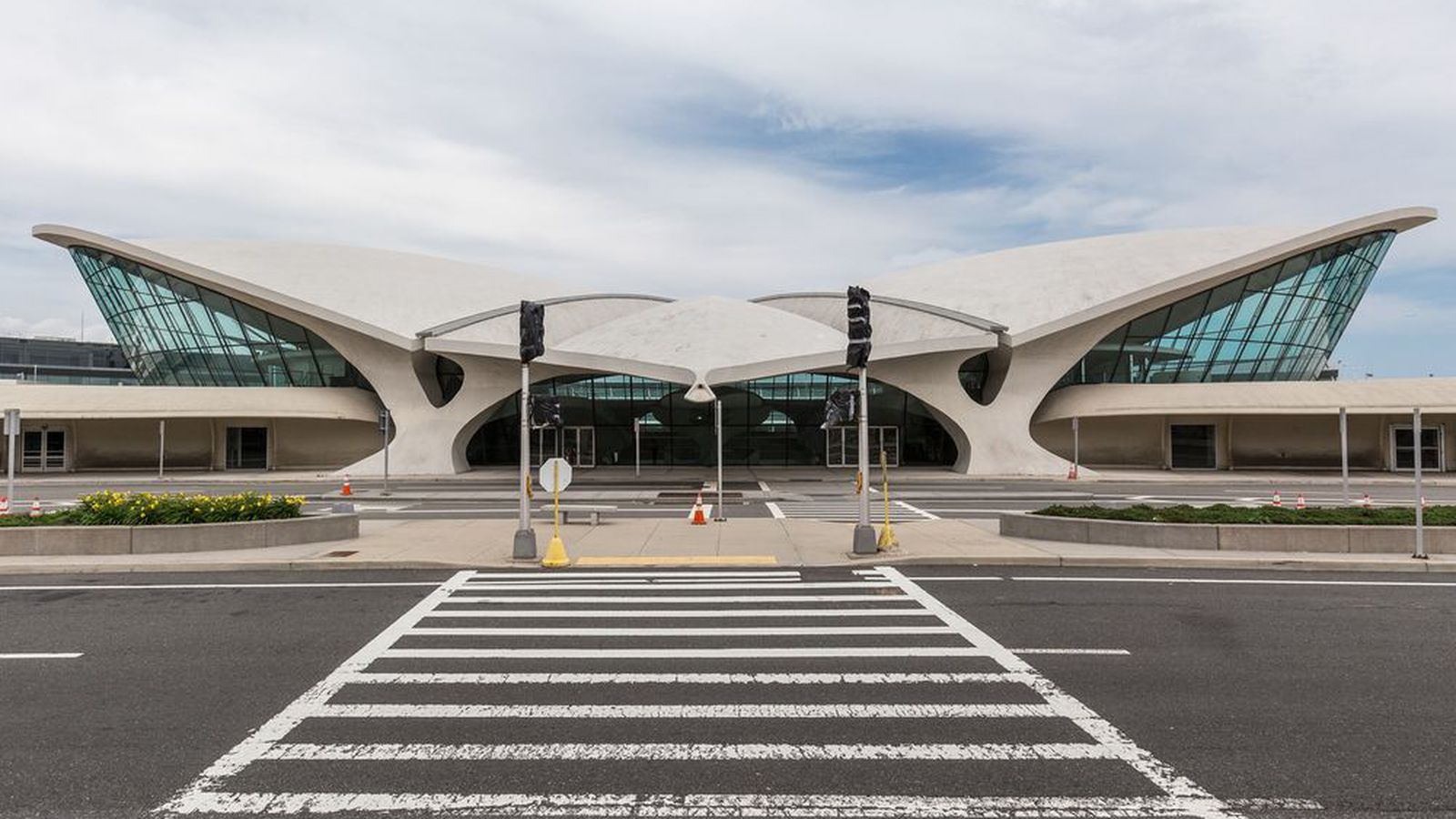 The redevelopment will include a restaurant inside a Lockheed Super Constellation aircraft, among other cool details.

I wish the old Pan Am terminal had gotten the same treatment instead of being turned into a parking lot for airplanes. 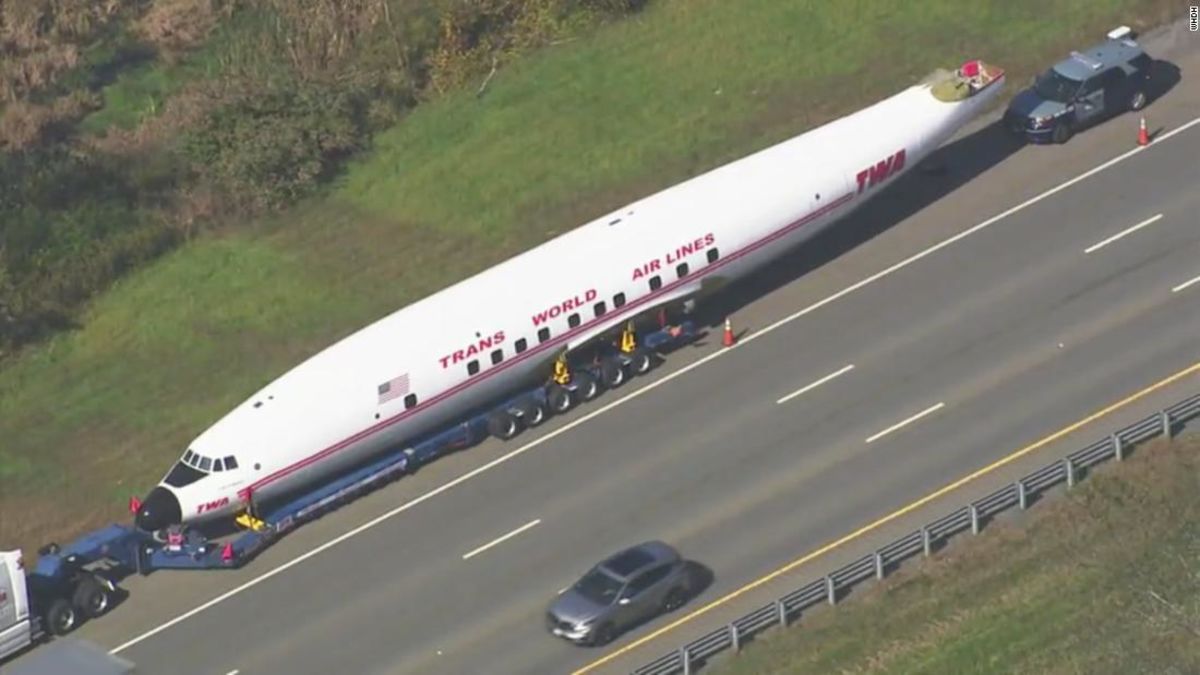 Historic airliner trucked 300 miles to be a hotel bar

A Lockheed Constellation L-1649A Starliner is trucked to John F. Kennedy International Airport, where it's expected to be converted into a bar and restaurant for the upcoming TWA Hotel.

"Connie,” a 1958 Lockheed Constellation airplane, will serve as a unique cocktail lounge and event space for the forthcoming TWA Hotel. 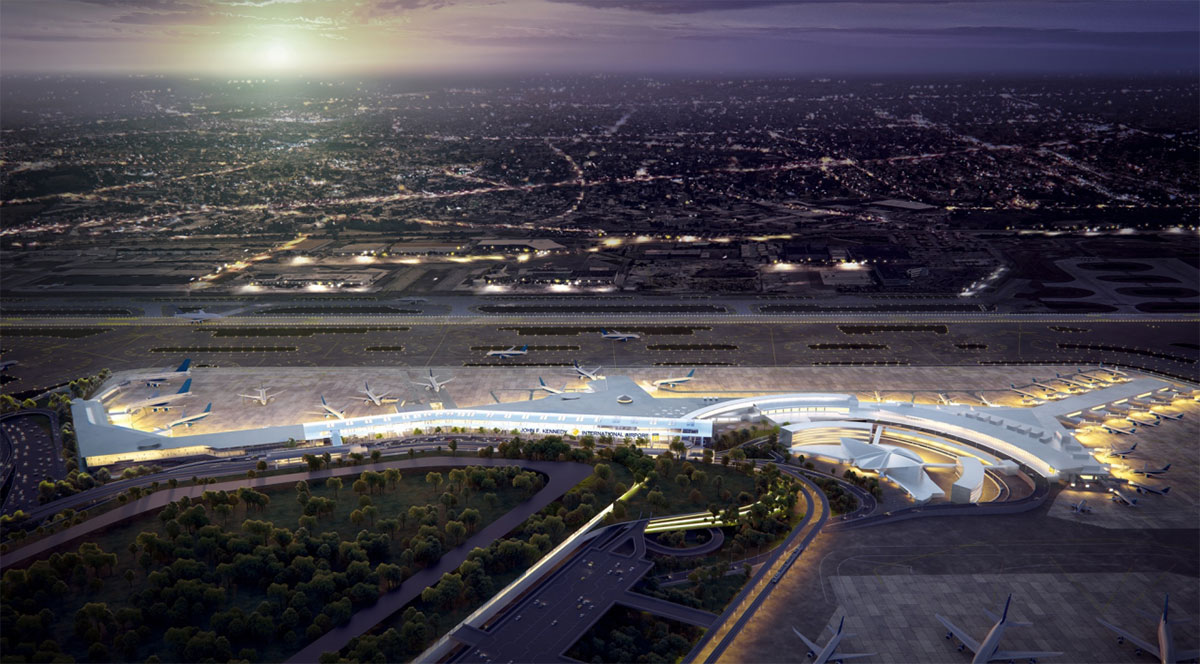 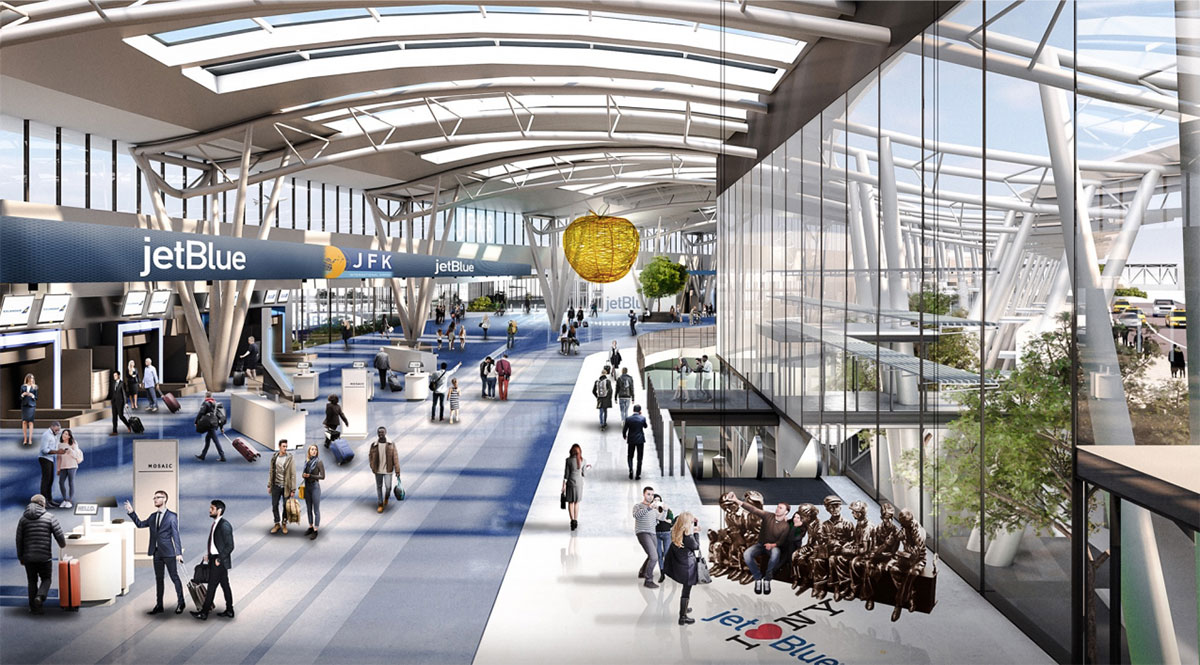 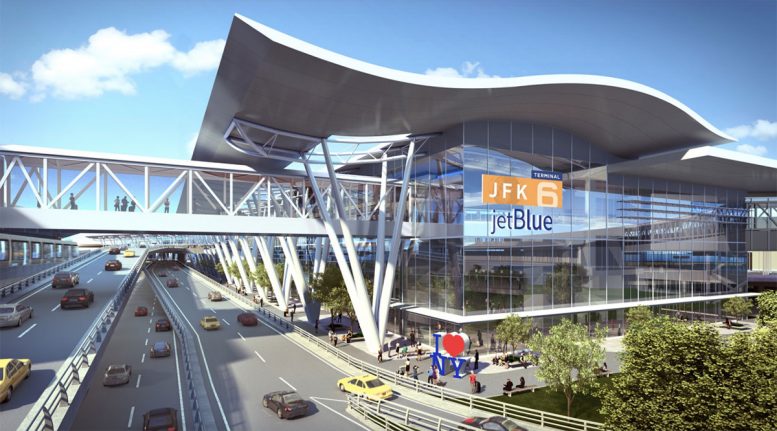 In an effort to improve both operations and accessibility to New York’s busiest airport, Governor Andrew Cuomo has endorsed a $13 Billion plan overhaul and transform John F. Kennedy International Airport.

The ambitious plan includes the replacement of terminals 1, 2, and 7 with conglomerated North and South terminals to help simplify and improve the traveler experience. Consolidated areas will also be able to accommodate more visitors, larger aircraft, and include more accessible areas for disabled and elderly travelers. Travelers who commute using public transportation will have access to larger and more frequent AirTrain shuttles.

New renderings, revealed by Curbed, give a first look of interior green spaces, New York-centric installations, and windowed ceiling enclosures that promote the flow of natural light. The master planning team is being led by Mott MacDonald and Grimshaw Architects.

More than 90% of the project cost will be funded by airliners who use the airport. The South terminal will reportedly be funded by Air France, Japan Airlines, Korean Air Lines, and Lufthansa. Jet Blue, alone, will fund development of the North terminal. A small portion of of the cost will be funded by taxpayers for new roads, overpasses, and infrastructure to accommodate a great increase in traffic.

Construction is expected to begin by 2020 with completion by 2025.

Renovated airports, skyscraper construction booming, new bridges! NYC is once again showing the world that it is the Capital!