The march of development along the Brooklyn and Queens waterfront is heading further north. Plans for Astoria Cove—a one-million-square-foot, mixed-use development in Queens—has been approved by the Department of City Planning, moving it one crucial step closer to breaking ground. The plan calls for three residential towers, commercial space, a school, and green space on the currently industrial site along the East River.

But it is the Cove’s crescent-shaped shoreline that is its defining feature. “Astoria Cove is really an outdoor room,” says Jay Valgora, principal at STUDIO V Architecture, which is designing the project. “It’s a huge inlet that wraps around you.” And to paint that room green, the firm has recruited landscape architect Ken Smith to transform the space with walkways, rows of trees, flowerbeds, and a rain garden. An “intimately-scaled” street separates the greenery from local restaurants and shops that are tucked into the towers. From the water’s rocky edge, a view opens up to Randall’s Island and the Triborough Bridge. To accommodate for climate change, the entire scheme is set above the current, and future, floodplain.

Valgora is adamant that rising sea levels should not deter development along the East River. He says that a transformed waterfront could provide “the most important series of public spaces” in the city’s future. Beyond creating new housing and open space, the development of the city’s riverside has been good to STUDIO V’s bottom line. The young firm has been commissioned for major projects along the water including the renovation of the Empire Stores warehouse in Dumbo, and the redevelopment of the 8.5-acre Halletts Point site in Queens. The latter sits adjacent to Astoria Cove.

The landscape design extends throughout the site, binding the tall towers along the water to the stepped townhouses further inland. These modern single-family homes are partially clad in horizontal wood slats and connected to each other through a landscaped courtyard. At night, the green space between them is lit with canopied, industrial lamps.

The site is scaled to “step up” as it approaches the shore, with three waterfront towers that will house 1,689 apartments, 259 of which are affordable. When asked about the new, generic glass towers of Jersey City and Williamsburg and Long Island City, Valgora says he is determined to not continue that trend.

At this stage, the towers at Astoria Cove are just massing studies, but they’re said to have “expressive” carved-out corners and tops. From the renderings, that expression is hard to decipher, but all of that could change. “We’re already speaking with the developer to create a whole new language of buildings,” says Valgora. It remains to be seen what that language will be. 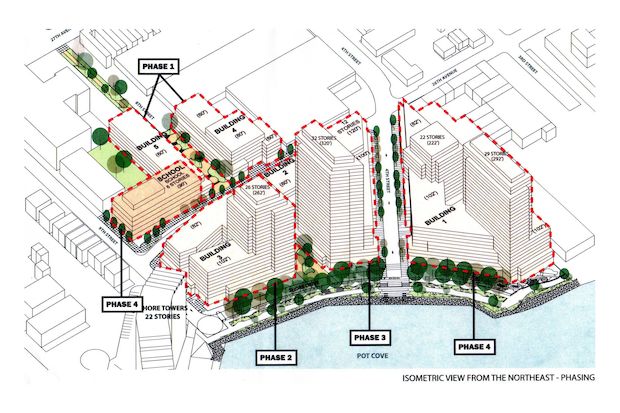 ASTORIA — The developers behind a plan to build thousands of new apartments on Astoria’s waterfront said this week that the project will include 345 affordable units, up slightly from their last proposal but still short of what local leaders want for the development.

2030 Astoria Developers said last month they were working to increase the number of affordable housing units in their Astoria Cove proposal — five mixed-use buildings with nearly 1,700 apartments on a portion of the Hallets Point peninsula.

The developers — a group of investors which includes Alma Realty — had last proposed 295 affordable units, which attorney Howard Weiss said accounted for 20 percent of the residential floor area of the development’s waterfront parcel (three buildings) but only 17 percent of the entire project. 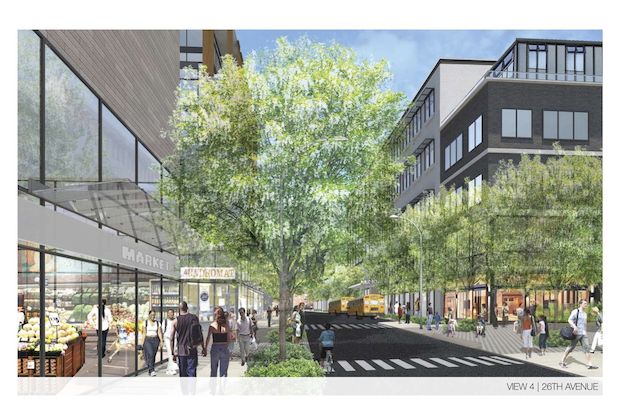 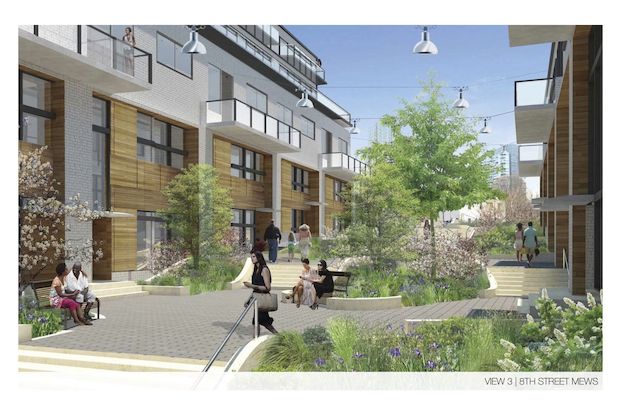 A development team called 2030 Astoria Developers that includes Long Island City-based Alma Realty gained a positive vote after earlier thumbs down by Community Board 1 and Queens Borough President Melinda Katz, but the vote with 10 commissioners signing on, one granting partial approval and two abstaining reflects commissioners’ support for a new direction for rezonings under Mayor Bill de Blasio‘s Administration, said Carl Weisbrod, the chairman of the commission.

“This development will be the first to be subject to a mandatory inclusionary housing requirement set forth in the zoning resolution,” Mr. Weisbrod said, calling the proposal a “harbinger” of future rezonings. “The Astoria Cove development would add a mix of market-rate and affordable housing, employment, shopping and recreational opportunities to service the needs of current and future residents in this portion of the growing neighborhood of Astoria.”

The proposed 2.2-million-square-foot development, which now moves to the City Council under the Uniform Land Use Review Procedure, includes 345 affordable units, a 25,000-square-foot grocery store, a site for a 456-seat school and 1.92 acres of new publicly-accessible open space. The proposed rezoning “heralds the dawn of a new era in equitable development in New York City” and opens a waterfront that’s currently blocked-off by industrial properties, the developers said.

“Astoria Cove will bring significant investment, good-paying jobs, hundreds of units of affordable housing, local stores and shops, and an expansive open space network to a community that has been neglected for too long,” said 2030 Astoria Developers in a prepared statement following the vote. “Astoria Cove also will be one of the most environmentally friendly and sustainable projects in the City’s history. All of this will be accomplished without any public subsidy.”

I hope this could get financing in time due.

A massive waterfront housing development in Astoria that required low- to moderate-income apartments prior to a citywide mandatory affordable housing policy has been scuttled. It’s a disappointment for Mayor Bill de Blasio, who had boasted that the project would be a “real game changer” in affordable housing.

From the time the 2.2-million-square-foot Astoria Cove project passed the City Council in November of 2014, developers questioned the economics of the project. Several speculated the builder, Alma Realty, would have a hard time obtaining financing for a development in which 27 percent of the 1,723 planned apartments — 459 units — would be rented to people paying less than the market rate in a neighborhood that does not command top-dollar rents.

Alma had also agreed to pay union rates for construction work, which can significantly drive up the cost of any project.

One developer who has been closely following the project said his firm repeatedly looked at the financial details of the project, only to conclude it would be nearly impossible to find a lender.

“That project needs a $65-a-square-foot rent and the rents out there are in the high $40s,” said the developer, who would only speak on background. “It was sort of a lack of sophistication on behalf of all involved and that’s what you get. If you create a fantasy, you only get a project in fantasy land.”

In a statement to DNAinfo, which broke the news last week, Alma told a different story, blaming the project’s failure on the expiration of the lucrative 421-a property tax break.

“Projects like this were conceived with 421-a in mind. We rely on its reauthorization in order to move ahead,” said John Mavroudis, principal of the company that owns the site, 2030 Astoria Developers.

The mayor’s aides similarly attributed the project’s demise to the end of 421-a.

the failure to replace 421-a immediately was a hitch in many developers plans. As soon as it happens, this project will likely begin.

With 421a expected to be revived, the owner of the Astoria Cove megaproject in Queens is looking to sell the site for $350 million.

this made a re-appearance after a long time in today’s City Planning Review Session.

edit, nevermind, it was this one directly adjacent. 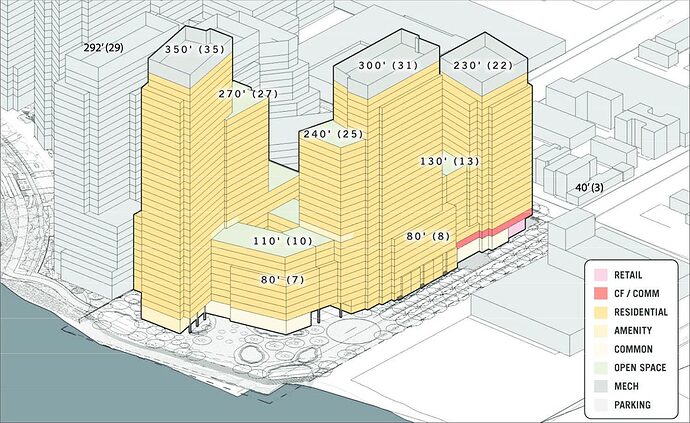 A newly published Environmental Impact Study has revealed Halletts North, a one million-square-foot development at the waterfront edge of Astoria, Queens. 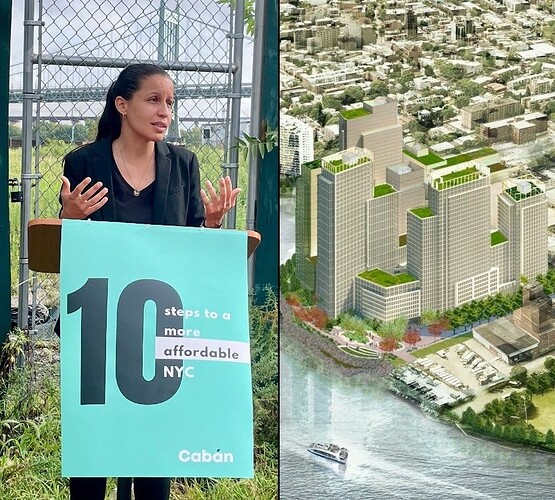 Tiffany Cabán said she will support the 1,300-apartment proposal after developers made it more affordable, paving the way for its passage.

Hunters Point is out and Hallets Point is in. The direction of development on the waterfront in Hunters Point has been clear for a long time. Now, space on the other end of Roosevelt Island needs to be developed as well. I wouldn’t be surprised if in a few years, Hallets Point breaks away from the rest of Astoria as far as development is concerned.