I wouldn’t use Toronto as an example of unique proposals that aren’t boxes but that’s just my opinion lol.

they started excavation on this site this week.

I really hope that this doesn’t turn out totally crazy.

From the construction fencing. What bothers me the most are the three buildings on 8th Avenue that are being swallowed by the base of this building. 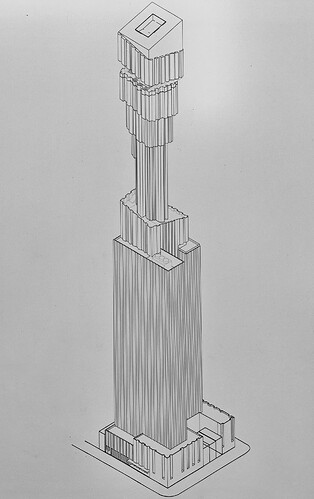 Great, so my interpretation was pretty much spot on kind of, that’s absolutely terrible. If someone wants to protest about anything getting built, protest about this. It’s jarring!

And I agree, the 3 buildings left over are a bothersome aspect.

I think the one potential saving grace is that the architects are ODA which does great work. I really want to see the final renderings before I pass judgement.

I also want to reserve judgement, but it’s difficult to do that because this just doesn’t look like ODA’s work at all, and you’re right that they do great work.

It seems to have a sort of spiraling effect at the top, maybe? This could turn out to be really interesting or unbearably ugly, no in-between lol. ODA is a talented firm and good materials might save this design, but I’m worried because it’s a majority-hotel tower in a somewhat seedy area, and contemporary hotel architecture in NYC is usually abysmal with bottom of the barrel materials–see the awful hotels south of the PABT just a few blocks from this site.

Yeah, it’s spiraling angularly, the way I interpreted it on my model was jagged (obviously because i was just going off plans) but im surprised how similar mine ended up being. I’m sure its supposed to be evoking Liberty’s torch somehow.

You’re definitely spot on in saying the typical hotel designs around the city are abysmal (gene kaufmann chimneys), not even just the ones near the PABT, but really all over the city, but yeah the colorful stripped ones you’re referencing are hideous. But do we know what chain will be residing here?

Hopefully it has awesome lighting.

I wonder what that is at the top. Observation deck?

This sketch looks scary bad. I also hope it isn’t built. I certainly don’t mind spires and towers to top off buildings. But this one is an awkward joke.

Thinking about it . . . a 1,000+ foot tall observation deck in Times Square will be a bananas hit.

That thing will be packed on New Years.

this is plain offensive.

A bit dystopian but also not terribly bad. I’d give it a C+. I think more detailed renderings will give an idea of the materials being used, those will be worth a watch. A façade can do wonders to turn something C+ into a B+. I think we should give Extell a chance here, they might be on to something good.

The selling point of this tower will be its catering to tourists.

I don’t know, I’m still with DeSelby that it can either be good or not good, I don’t see an inbetween for this project in particular.

Even though the whole top half of this is an attraction/observation deck with a ride of some sort, I think only a certain amount of people will be permitted at a time because the space on the spiral portion is not that big for crowds to just be idle and take up space. The whole spiral part is akwward though because you arrive at the top and then go down, not the other way around.

Which raises the question of the ticketing scheme. Something similar I bet to the Edge at 30 Hudson but more crowded. This will be crowded, especially as it will be marketed with the Times Square views.

Although one thing that might keep the crowds down is the price.

The stalk-like massing vaguely reminds me of the W Hotel, another Extell development in Times Square. The facade on that building is hideous. This new Extell hotel will have an observation deck unlike the W, so that means a glass facade at the top. But I shudder to think about what the “stem” and the hotel base will be clad with. I hate the awful colored facade panels and thoughtless blank walls that appear on most recent NYC hotels and don’t want that junk here on such a tall building. 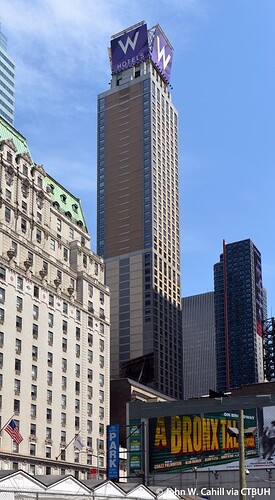 Looking at that diagram more closely, there seems to be grooved details in the facade of the base and “stem”, a good sign. 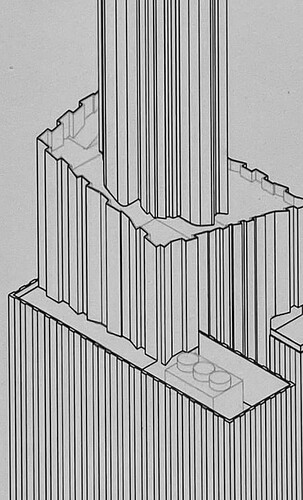 This looks great, but it will come down to the materials. ODA is known to use bare concrete