1,000 Apartments Could Be Built on Top of East River Plaza

HARLEM — The developers of the East River Plaza mall are planning to add a residential tower with as many as 1,000 units atop the existing structure — and want to get some feedback from East Harlem residents at a meeting Wednesday night.

“Residential has always been contemplated. The infrastructure is there, the property has water views, is next to the FDR Drive and would be an iconic property,” said David Blumenfeld, a principal of Blumenfeld Development Group, Ltd. which owns the mall at 116th Street and the FDR Drive along with Forest City Ratner Companies, one of the city’s largest developers.

“That’s why we want this open community meeting to get a feeling about what people would like to see,” Blumenfeld said of the meeting, scheduled for 6 p.m. July 9 at Hunter College School of Socialwork. “We are going to present some ideas in regards to residential and get some feedback from the public.”

The five story, 500,000 square foot complex, which opened in 2009, currently houses stores such as Costco, Target, Burlington Coat Factory and discount grocer Aldi, which opened its first Manhattan location at the mall in 2013.

The underlying zoning of the property is already designated for residential use and would only require a modification of the special permit used to build the retail center Blumenfeld said.

Blumenfeld added that a final decision on size or height has yet to be determined. But he said affordability will definitely be a part of any residential project at East River Plaza and that the company was looking to do a higher rate of affordable housing than the standard 80 percent market rate and 20 percent affordable split.

“That’s one of the conversations we are having,” Blumenfeld said.

Blumenfeld and Ratner submitted a pre-application with city planning, but a formal review process with the public hasn’t actually started yet. The developers sought to seek comments before releasing design concepts to the broader public. The presentation involved nondescript diagrams showing three residential towers at 1.1 million square feet and a much more detailed picture of the public space. Residents were given time to respond to the entire project, but the developers’ presentation focused mostly on the public space. Still, the image of buildings looming 36, 42 and 48 stories high received a collective gasp from the crowd at first sight. 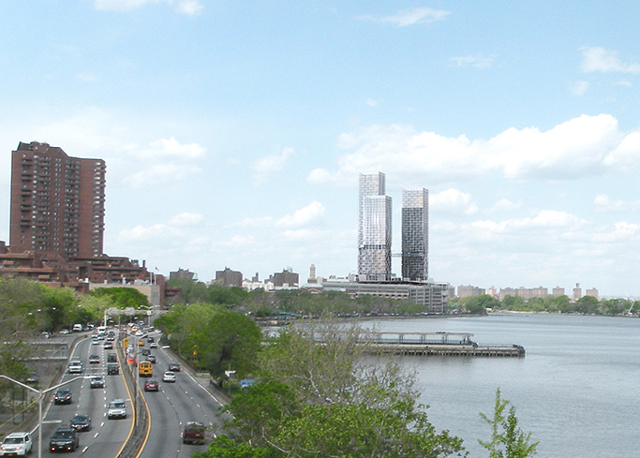 Earlier this fall, filmmaker Andrew Padilla got his hands on the massing diagram of Forest City Ratner’s proposed East River Plaza redevelopment. The portion of the mall on FDR Drive between East 117th and 119th Streets would give rise to three fifty-odd-story buildings. And now, YIMBY has the first semi-detailed look at the plans, designed by TEN Arquitectos. 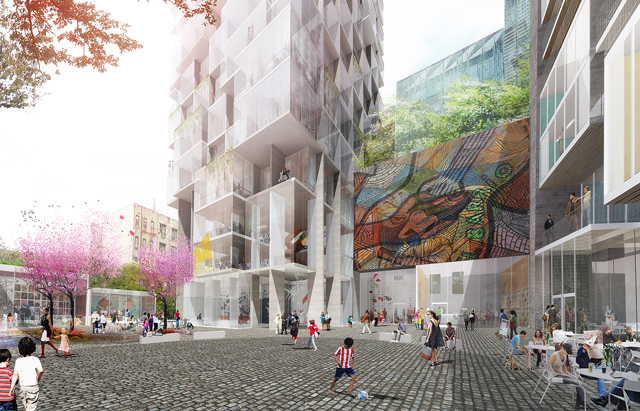 The three towers would rise atop two podiums placed over the existing mall and parking garage. Previously posted diagrams reveal the tallest of the group will stand 575 feet to its pinnacle, which is certainly tall for Upper Manhattan – taller than 1800 Park Avenue will be, even – but nothing extraordinary for New York City.

Still, the trio of high-rises would dwarf the surrounding tenements and even the public housing farther afield, with even the two shorter buildings clocking in at 515 and 455 feet tall. (The towers are only 47-, 41-, and 32-stories tall, but are boosted an extra 100 or so feet by the mall and transfer decks on which they would be built.)

From up-close, the designs take a more interesting turn. Variegated facades seem to emulate ODA’s work around the city or Herzog & de Meuron’s 56 Leonard. One of the towers would come all the way down to the street at “La Plaza,” which would rework the cobblestone dead-end of East 118th Street into an active public space. Glass cut-outs would be juxtaposed against future displays of public art over the black face of the current mall, integrating art and architecture into a coherent public space.

Additionally, while it is difficult to tell in the renderings, the towers will be connected by two skybridges. The West Tower — the tallest of the bunch — will be the anchor, connected to the North Tower by a bridge at an elevation of 245 feet. Its link to the southern tower will be slightly higher up, at 255 feet. 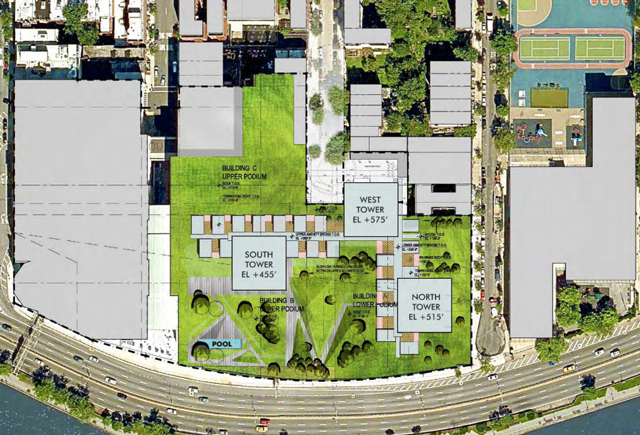 Of the towers’ 1,100 apartments, 25 percent would be let at below-market rates, according to Forest City Ratner’s proposal. They would go to households making 30 to 60 percent of the area median income, which this year would work out to anything from $18,000 for an individual to $52,000 for a family of four.

The site already has the zoning to accommodate the residential uses, but East River Plaza must still go through the politicized ULURP process because of a special permit used to build the mall. With a 25 percent affordable set-aside, the project would have more below-market housing than a typical 80/20 development.

The de Blasio administration will surely feel pressured to ask for more, and they may be able to eek a few more units out of the developers. But at the end of the day, they should approve the project, and encourage others like it throughout the neighborhood. The portion of the mall between East 116th and 117th Streets would be one place to start, and indeed, even more housing could easily be accommodated in the surrounding blocks. 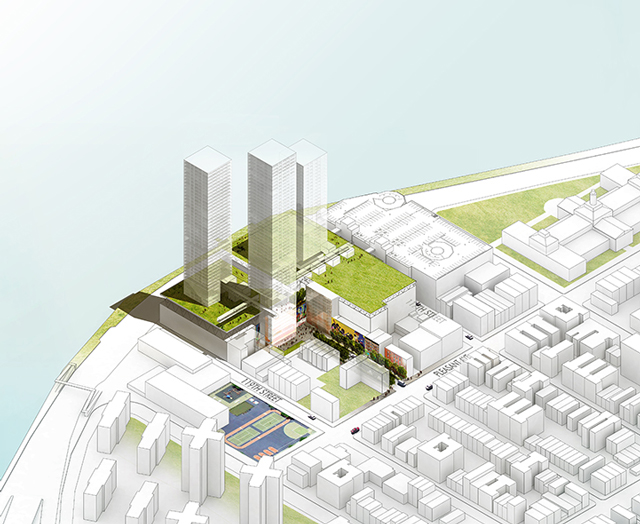