UPDATE: Reps have sent along new information to accompany the images, and “50 West residents will have access to amenities including a full-fitness center/60-foot lap swimming pool, a screening room, a library, as well as studios designated for children and arts and crafts,” and unexpectedly, the project will also have an observatory on the 64th floor, which “will serve as an exclusive entertaining space, offering views of New York Harbor, Ellis Island, and the Statue of Liberty.” Thomas Juul Hansen is designing interiors.

A tipster sent along a slew of new renderings for 50 West Street, which has seen several design revisions over the course of its prolonged conception. As work has resumed at other projects, excavation on the Helmut Jahn-designed tower has been ongoing, and the structure will soon rise above ground level; Time Equities is the developer.

Permits — which were approved earlier this month — indicate that 50 West Street will stand 783′ to its pinnacle. The tower will total 427,177 square feet, with a 21,127 square foot commercial component on the first two levels; at the top, a duplex penthouse spanning 62 and 63 will cap the structure’s 191 condominiums.

With One World Trade Center, image by DBOX

Renderings include the first look inside the tower as well; some units will include double-height living rooms, and views will be sweeping. 50 West Street will be the tallest building in the immediate vicinity, located just a few blocks south of the new World Trade Center, and well outside any shadows. Its relative prominence will be somewhat diminished by the 961′ 22 Thames Street, which will soon rise to the northeast, but it will still rank as one of the tallest residential skyscrapers in New York City.

While the vicinity is not particularly friendly to pedestrians, the rise of 50 West will still improve a formerly vacant lot. Next-door, the Battery Parking Garage presents another prime development opportunity, and removing and revitalizing that site would present an opportunity to further improve the neighborhood.

The delay in construction at 50 West Street has resulted in some benefits, as the design has been re-imagined to cope with the threat of potential flooding, made obvious after Hurricane Sandy’s impact on the neighborhood.

50 West Street and One World Trade Center, image by DBOX

Completion is slated for 2016.

A new video by DBOX depicts the evolution of 50 West Street, from construction to completion; the short clip comes just a few months after YIMBY’s reveal of the project, which featured a slew of fresh renderings. Helmut Jahn is the architect, Thomas Juul Hansen is designing interiors, and Time Equities is developing.

Whether construction proceeds as smoothly as the video indicates is up in the air, and excavation is still ongoing, but if the imagery is accurate, the concrete superstructure’s rise will quickly be followed by cladding, and the glassy building should take approximately two years to reach completion. The skyscraper will stand 783 feet tall, towering over nearby structures, and becoming one of the tallest residential buildings in Lower Manhattan.

Helmut Jahn’s design is smooth and sleek, and 50 West Street’s context within a predominantly pre-war neighborhood enhances the tower’s appearance, and the contrast humanizes the structure, softening the lower levels. Above, the building is cast against One and Four World Trade Center, and its contemporary neighbors are similar in appearance, each derived from glass and steel.

Combined, the reflections off the World Trade Center and 50 West Street will be stunning; both sunrise and sunset will be showcased on the actual cityscape, and if Lower Manhattan’s glassy towers are good for one thing, it’s integrating sky and skyline. 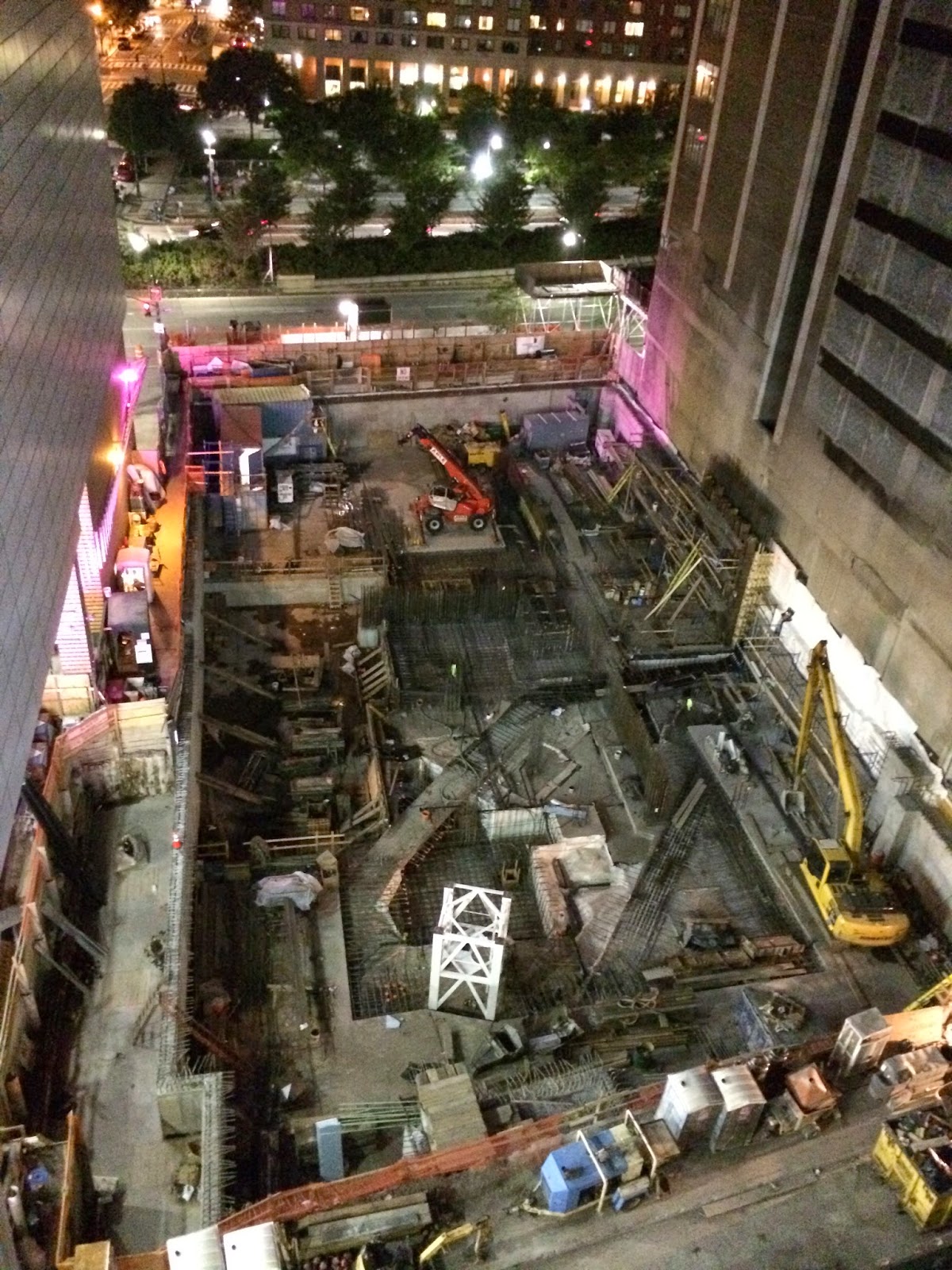 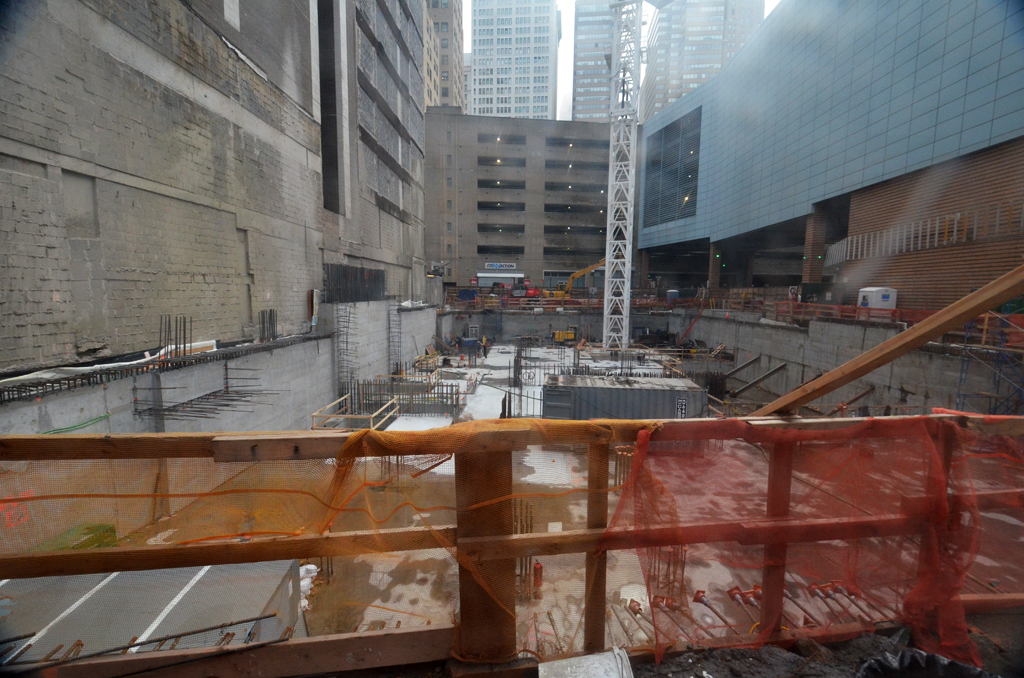 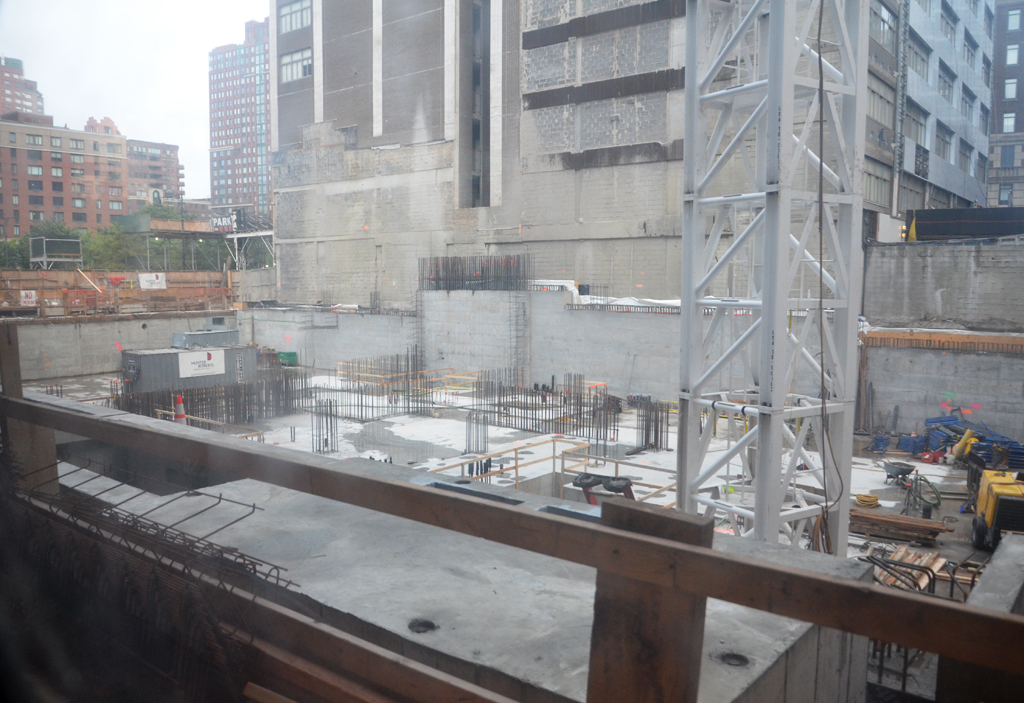 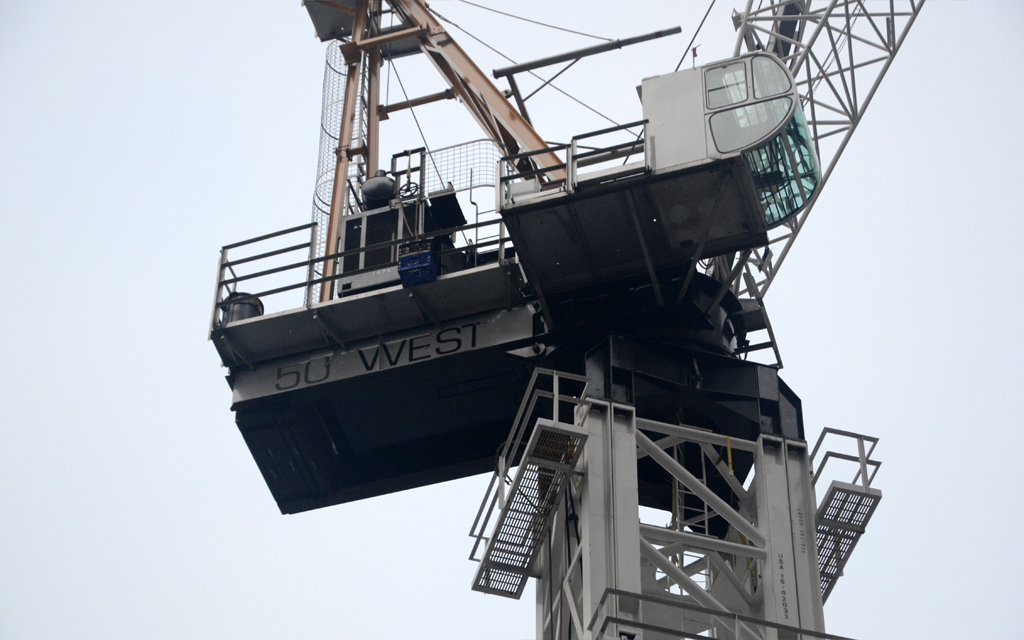 So glad to see this is finally happening! The sales model is also pretty spectacular

I got really confused as to why the columns at the bottom are wonky, but then realised that the building tapers outwards slight at the base! What a nice subtle addition to the design! 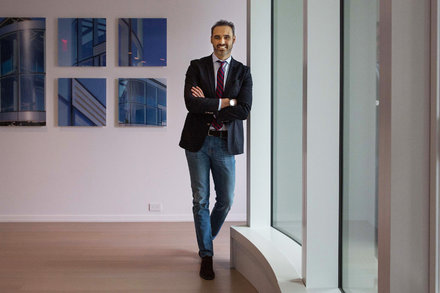 Behind the Curved Glass of New York’s Residential Towers

Daniele Petroni is a project manager with a specialty in the curtain walls used in many of New York’s luxurious residences.

At the construction site morphing skyward at 50 West Street, a curvaceous 64-story glass-and-steel condominium whose distinguishing exterior motif will be its transparent assemblage of rounded corners, Daniele Petroni, protected from a flutter of snowflakes by his fashionably gray hard hat, gave a huge curved glass panel near the base a paternal pat.

If Mr. Petroni, a project manager whose specialty is curtain walls, could have hugged the nascent building, where 151 luxurious residences are scheduled to be completed by the end of next year, he probably would have.

“I love curved glass,” he said, his declaration lent a courtly cadence by his Italian accent, “because to me the views it makes possible translate into architecture having an open mind. Looking through this glass, your perspective instantly widens. It’s magical. And it’s gentle on the eyes.”

It’s like looking through a fun house mirror that enhances rather than distorts, except that the experience is more expensive: One-bedroom apartments with 20-foot-high living room walls of curved glass start at $1.83 million, while penthouses with 360-degree views begin at $18.65 million. And because the virtually seamless vistas this technologically precocious triple-pane glass makes possible are gaining traction with high-end developers and their demanding clientele, Mr. Petroni’s area of expertise, and passionate interest, is proving timely. In a 21st-century tweak of that oft-cited prophecy in “The Graduate,” the future isn’t plastics, it’s glass, especially when the product in question is over-the-top urban spires. 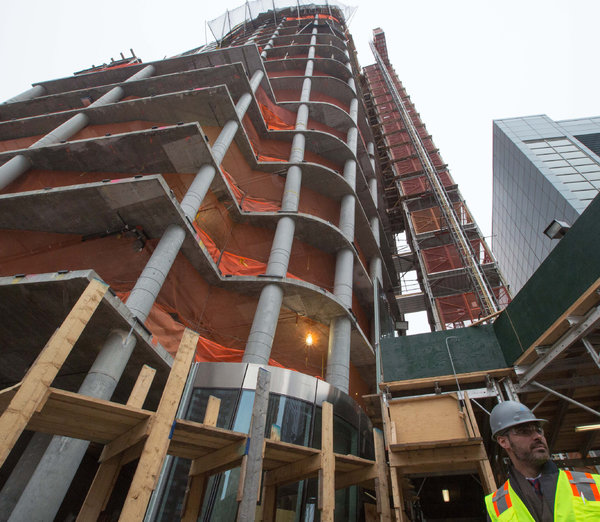 According to Mr. Petroni, 31, curved glass’s moment has just begun. The use of curved glass eliminates the need for corner panels and vertical mullions that obstruct views, and it gives the resident a much broader view with less interruption; in a sense, the view is magnified.

After Permasteelisa North America, a division of the global behemoth with a factory in Windsor, Conn., was chosen to source, design and install the highly unusual and complex curtain wall at 50 West, the company appointed Mr. Petroni as the project manager for the facade. Time Equities is the developer of the $500 million building, which was imagined by the innovative architect Helmut Jahn. Fifty West’s glass was made in Northern Europe, sent to Spain for further refinement if it was to be flat, or to China if it was to be curved, and then to Connecticut to be inspected.

Thanks for updating this Eveningstar! 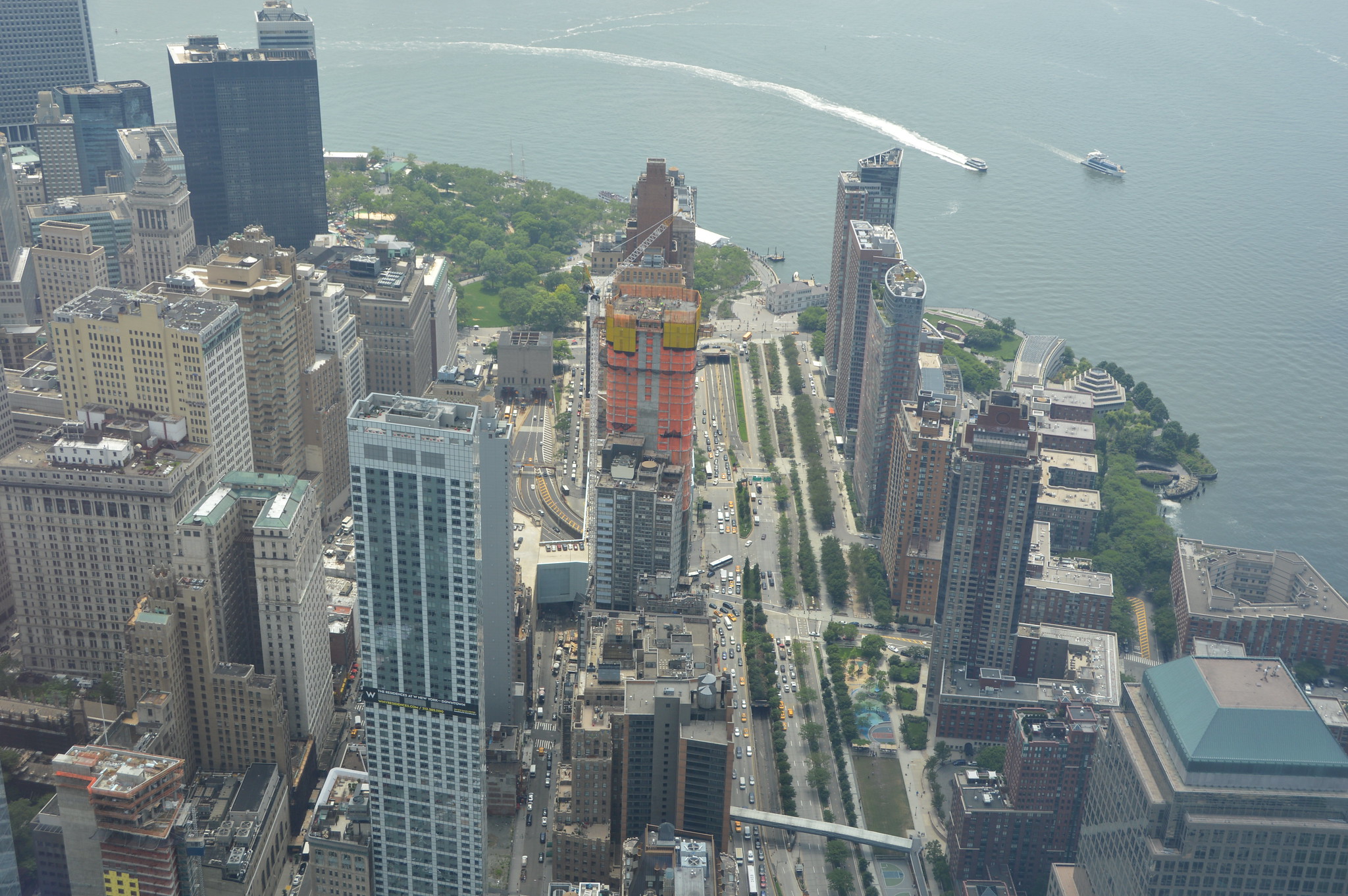