At Junior’s Site, Bidders See Brooklyn, Too, as a City of Spires

There was a time when some Brooklynites could look down on their neighbors on the far shore (and many still do in their minds). But two years before Whitman’s death in 1892, the New York World Building opened, the tip of its flagstaff soaring some 349 feet over Park Row. The first building to overtake Trinity Church in height, it helped kick off the city skyscraper race. Manhattan has hardly looked back since.

But as in all things these days, it will soon be hard for Manhattan to ignore Brooklyn. The county of Kings has seen a skyscraper boom over the past decade, but hardly one to rival that across the river. Now, Brooklyn partisans may soon extol heights rare even in Manhattan, in the form of a 1,000-foot tower. The new edifice would replace one as synonymous with Brooklyn as Whitman himself: Junior’s Restaurant, the two-story neon-lit establishment where until now the only things towering were the slices of cheesecake and the Reuben sandwiches.

Throughout Downtown Brooklyn, auto body and pawn shops have given way to new condo and rental towers, thanks to the first large-scale rezoning of the Bloomberg era, enacted 10 years ago this month. Some 33 new apartment buildings have risen downtown, with 5,351 apartments, according to the Downtown Brooklyn Partnership. Another 11 are under construction and 16 are in development, with an expected 12,500 units, each more luxurious than the last. The rezoning has also brought Brooklyn its tallest buildings. The 515-foot Brooklyner, a 414-unit tower that opened in 2010, stands three feet taller than the Williamsburg Savings Bank Building, and 388 Bridge Street, completed this year with 378 apartments, is 590-feet tall.

Like a crowded Jay Z show at the Barclays Center, the more cramped things get, the better it is to be taller. “In New York, even the air is finite,” said Carol Willis, the director of the Skyscraper Museum, which currently has an exhibit that explores the super-tall, slender apartment buildings that seem to be this boom’s signature. “If you look at what’s happening in Midtown, you have to go higher and higher for the really spectacular views.”

The technology to reach these heights has existed for decades; the Empire State Building itself is more than 70 years old. Making elevation pay off is another story, which is why many of the earlier developments downtown did not go as high as they could have. Bruce Ratner proposed a 1,000-foot tower in 2007, and City Point was originally going to rise 65 stories, but both were ahead of their time. No longer.

The borough president, Eric L. Adams, said that with Brooklyn’s newfound international stature, a thousand-foot tower (of which there are now only six citywide) is inevitable. “We’re not anybody’s little brother anymore,” Mr. Adams said. “Don’t mess with the new address: Brooklyn.”

His constituents are less eager, however. “They’re trying to make Brooklyn the new Manhattan, and we don’t need two,” said Stacey Steele, who had just finished an after-work meal with two friends at Junior’s on Friday afternoon (she had ordered the strawberry cheesecake).

Whether they like it or not, Ms. Steele and the rest of Brooklyn may well find a thousand-foot tower in their future. “Oh sure, they fit everything in New York City,” said Miss Kitty, a psychic who has watched over the Junior’s crowds for seven years from her storefront across the street. “It’ll take three years.” 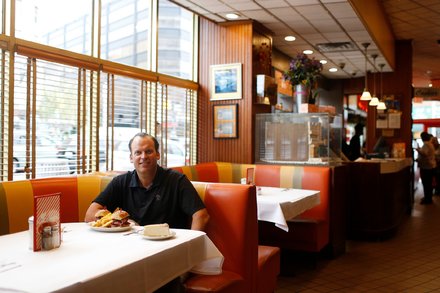 Junior’s, Legendary Restaurant, Is to Stay in Brooklyn

After considering a sale of the two-story building, the owner of the spot famous for its cheesecake turned down several multimillion-dollar offers and chose to stay put.

Offers to buy and build an apartment tower poured in from Brooklyn, Manhattan and abroad. The highest bid: $450 per buildable square foot, well over the previous high for Brooklyn of $350, for a total of $45 million in cash.

The $45 million offer would not have accommodated a ground-floor Junior’s.

Mr. Rosen said he also received offers worth half that amount that would have allowed the restaurant to return, but after receiving disappointed calls from customers and talking it over with his longtime employees, his wife and his 81-year-old father, Walter Rosen, who still walks around the dining room some mornings, he decided he could not give it up.

It takes some courage to turn down that much money. For some, tradition is irreplaceable.