Well, that was fast! Shortly after we broke news that the building at the corner of 80th and Broadway would be demolished, we received the rendering above of the building that is being proposed for the site. Friedland Properties is using the rendering to advertise the space to potential retail tenants.

The building will be 20 stories tall, and it appears from the retail floor plans that it will have two above-ground and two below-ground floors for retail establishments. Food establishments will be allowed. The bulk of the building, as expected, will contain luxury apartments, many of which will have balconies. We don’t know yet whether they’ll be rentals or condos. The Larstrand, another Friedland project, is a rental property. Rose Associates will manage the building.

State assembly member Linda Rosenthal got in touch with Friedland Properties after seeing our story (Friedland still hasn’t responded to us). Lauren Schuster, Rosenthal’s chief of staff, tells us Rosenthal will push hard for affordable housing units to be included in the development.

But it’s not clear that the developer will need to make any concessions such as adding affordable housing, because those concessions are usually made only when a developer wants to exceed the zoning allowed on the site. If zoning allows you to build “as of right” you can do so without having to negotiate the planning process. Rosenthal’s office was not sure yet whether the proposed building would exceed the zoning requirements.

She’s also not sure how much of the block will be demolished to make way for the building. The proposed building’s address is listed as 2234 Broadway, although the demolition permit is for 2228-2236 Broadway. “That could be because they chose a middle address for the entire building which will span the whole lot or because there are other things going in at adjacent spaces,” Schuster wrote.

That’s not appropriate for the UWS.

Earlier today, permits were filed for a 14-story building at 2228-2236 Broadway, on the Upper West Side.

It’s hard to know how much of the information on the permit is correct – the total construction area is listed as a too-neat 123,456 square feet, none of the other square footages add up, and the email address of the property owner is not functional. But the permit indicates a 54-unit, 14-story mixed-use building rising to 150 feet at the corner of Broadway and West 80th Street, developed by Rose Associates, and designed by the Stephen B. Jacobs Group.

A rendering obtained by Linda Rosenthal’s office last year, however, depicts a building with a few more stories. We’ve asked the developers for a more current rendering, but have not yet heard back.

Overhead shot of 2230 Broadway (to the upper-left of the blue dot), from Bing Maps

A lot size of 10,300 square feet multiplied by a floor area ratio of 10 (as allowed in C4-6A zones) would yield a total net area of 103,000 square feet, or 123,600 square feet if the developers participate in the city’s Inclusionary Housing Program, suggesting that the 123,456-square foot size could be correct. 2230 Broadway lies along a narrow strip of land that is the only part of the Upper West Side along the 70s and 80s not in a landmark district, giving the architect a freer hand when it comes to the project’s design.

The site has been controlled by Friedland Properties since at least the ’70s, according to property records; reached by phone this afternoon, a contact at Friedland said that Rose Associates would be handling development. The two firms also worked together on the Larstrand, an 181-unit rental building a few blocks south.

While the current market would normally push developers in the direction of condos, Friedland usually builds rentals above ground-level retail. The fact that the firm has owned the site for so long — and did not need to compete with condo developers for the land — makes luxury rentals more financially feasible.

Foundation work is finished and, as the pictures show, forms for the ground level floor are now being built.

Same rendering is up that has been on the fence for a long time. Nothing new.

The ground floor is in place and scaffolding to hold forms for first above ground floor are on site. No sign of a crane yet. Here is the situation as of 9/11.

Why do you think a crane would be present?

They were lowering equipment into the basement levels. Tower crane, I assume, will come soon but that is not what was going on this past weekend.

Cement pour for third floor began this morning. Presumably the building now will rise more quickly as the standard floors are constructed.

Building now up to forms for sixth floor. Cement pump has been installed so it looks like there will not be a tower crane.

About a floor added per week. Now up to ninth level. 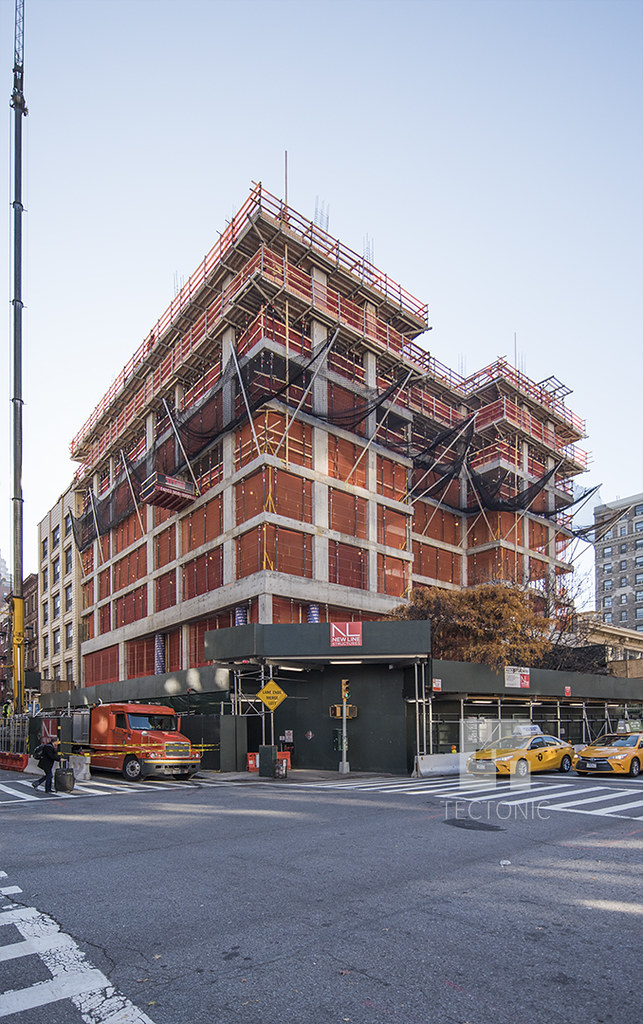 Forms for 14th floor now being set up. I think that will be the last full floor before the set back upper floors are built.

Tower portion now well along. This one will top out in a few weeks.