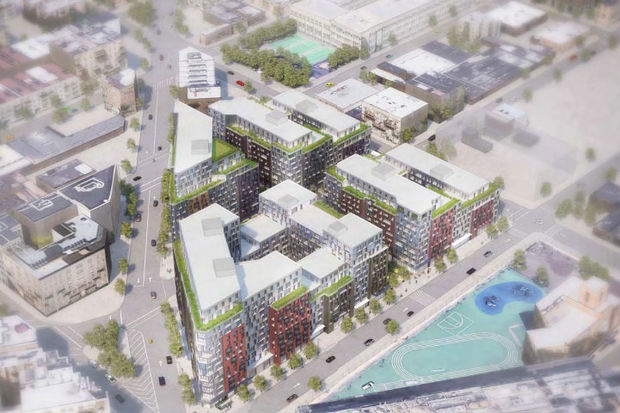 The public can now weigh in on a colossal apartment complex plan that could transform the long-neglected Broadway Triangle area with public green space and retail rentals.

One hundred and fifteen of the subsidized apartments would go to families making around $38,000 a year, while another 172 would be set aside for families earning around $57,000 for a family of four, according to rules set forth under the city’s Mandatory Inclusionary Housing.

Advocates and local city councilman Antonio Reynoso argue that the city should settle the lawsuit and come up with a plan for the whole Broadway Triangle area before any more individual properties are rezoned, though the city has maintained that the Rabsky Group has the right to propose a rezoning of the property it owns.

Further stoking the rage of community advocates, owners Simon Dushinsky and Isaac Rabinowitz of the Rabsky Group have a checkered history in north Brooklyn, in particularly in Bushwick, at the former Rheingold brewery site where they’re currently developing another large complex.

Reynoso and community advocates there say the Rabsky Group has failed to live up to commitments made by an earlier property owner on the number of affordable apartments they’re building.

Now that the city has certified the Rabsky Group’s plan for the Pfizer site, Community Board 1 has two months to hold a public hearing on the project and write a recommendation.

No date has been set for that hearing.

Simon Dushinsky and Isaac Rabinowitz’s Rabsky Group is forging ahead with an eight-building development in South Williamsburg’s Broadway Triangle, after a judge dismissed a discrimination lawsuit against the controversial project earlier this year.

Dushinsky, together with co-developer Joel Gluck of Spencer Equity, landed a $65 million loan from an unnamed financial institution for the project, according to documents filed with the Tel Aviv Stock Exchange.

Under the terms of the new loan, which carries an interest rate of 4.5 percent over Libor, Dushinsky and Gluck have the option of increasing the debt to $80 million, and the lender has right of first refusal on the financing of a second stage of the two-block development.

Rabsky and Spencer are equal partners in Harrison Realty LLC, the owning entity of the project, which consists of 1,146 housing units — 287 of which will be affordable — and 65,000 square feet of retail.

Rabsky’s plan for the area has ignited several rounds of community disssent. After the city approved a rezoning that allowed the project to go through, several community groups sued claiming that the influx of market-rate apartments would discriminate against people of color. The suit was dismissed in July.