The crown jewel of the WTC. As 3WTC is going to resume vertical construction in a couple of weeks, I remain optimistic about 2WTC’s fate. Shouldn’t be too long till we hear some good news.

Hopefully it will be complete by 2020. The corner of Church & Vesey needs to be completely permeable to pedestrian traffic, and the overall site will suffer until 2 WTC is finally built. 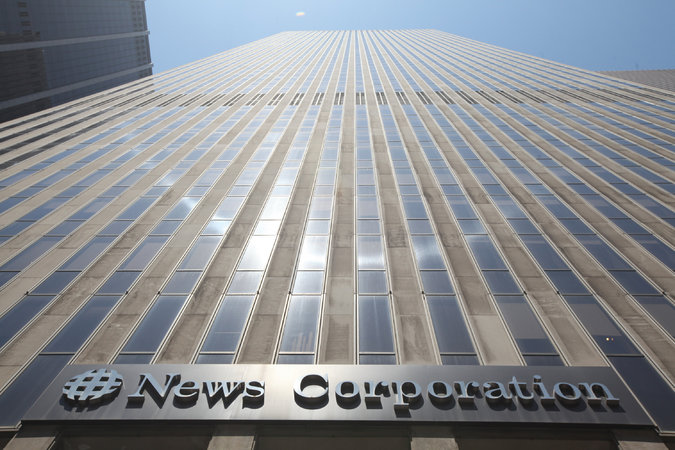 If a deal is struck, the move by the companies from Midtown Manhattan to a new tower downtown would complete the rebuilding of the office complex destroyed on Sept. 11, 2001. It would also solidify the transformation of Lower Manhattan into a technology and media hub and a lively residential community.

The companies, which include Fox News Channel and The Wall Street Journal, have been in discussions for months with the Port Authority of New York and New Jersey and the developer Larry Silverstein, who has the rights to build the fourth and last office tower at the site, known as 2 World Trade Center, according to the real estate and government officials, who asked not to be identified because the deal had not been finalized.

“This move would establish media hegemony in Lower Manhattan,” said Mitchell Moss, professor of urban planning at New York University. “News Corp. and Fox are in everyone’s living room. It removes any uncertainty that the new trade center would be a major economic engine, and it validates the 15-year effort to rebuild the World Trade Center.”

News Corporation and 21st Century Fox would require a substantial revision to the long planned 2 World Trade Center, at the corner of Vesey and Greenwich Streets, which was designed by the British architect Norman Foster. The companies want the base of what is now a cruciform-shaped tower with a diamond crown to accommodate television studios.

The discussions on the trade center are shrouded in a confidentiality agreement, but several executives who have been briefed on the plans say that both sides are spending an enormous amount of time and money assessing the feasibility of the project.

Nathaniel Brown, a spokesman for 21st Century Fox, said on Friday, “Twenty-First Century Fox and News Corp. are each exploring options for their New York headquarters and the process is ongoing.’’.

Even as the new trade center has taken shape, the surrounding Lower Manhattan neighborhood has undergone a remarkable transformation. The area, which 20 years ago often looked like a ghost town at the end of the work day, is now home to upscale restaurants, luxury retailers and more than 60,000 residents.

The financial industry, which lent the neighborhood its name, still has a strong presence. The New York Stock Exchange remains on Wall Street. The Federal Reserve Bank is still on Liberty Street, and Goldman Sachs is an important downtown firm.

But 1 Wall Street, the historic Art Deco home of Irving Trust and Bank of New York Mellon, is being converted into luxury apartments, as are many other older downtown office towers.

Chase Manhattan Plaza was sold to a Chinese company. Time Inc., and its stable of magazines and digital media properties, is moving to the five-building office complex that was once known as the World Financial Center. Merrill Lynch and Nomura, a Japanese financial firm, are gone from the complex and its owners have renamed it Brookfield Place.

We may be getting a redesign. Maybe…

A deal is far from certain, as the companies are also considering a renewal of space at their midtown headquarters, 1211 Avenue of the Americas, which was built in 1973 as an expansion of Rockefeller Center. They expect to make a decision in coming months, these people said.

Even though the companies’ current headquarters lease doesn’t expire until 2020, it takes years to plan and construct a skyscraper. News Corp, which owns Dow Jones & Co., publisher of The Wall Street Journal, and 21st Century Fox were both part of the same company until 2013. Rupert Murdoch, chairman and chief executive of 21st Century Fox, is also News Corp’s chairman.

If the companies indeed opted to move to the World Trade Center, it would mark by far the largest change to the closely watched rebuilding since the tower designs were unveiled in 2006.

Mr. Ingels, a young and relatively obscure architect when Mr. Foster first designed the tower a decade ago, has quickly vaulted to prominence in the field. Eccentric and fast-talking, he is known for abnormally-shaped buildings and sustainable design. The plans for Google, for instance, call for a series of low-slung giant glass bubble-enclosed office building, resembling Jetsons-style architecture, but filled with lush indoor plant life.

“Architecture at its best is really the power to make the world a little more like our dreams,” he said at a design conference last fall. “You take something that is a wild idea, like pure fiction, and you suddenly change it into hard fact.”

His design would keep the World Trade Center tower at about the same height of the 1,270-foot design by Mr. Foster, and it would be about the same 3 million square foot size, people familiar with the design said.

21st Century Fox and News Corp homed in on the Trade Center as an option given that there are few existing buildings with sufficient space for the companies, and development sites on the far West Side have generally grown expensive compared with lower Manhattan, people familiar with the search said.

The planned 2 World Trade Center tower would have plenty of room, as the companies would occupy about half of the 3 million square foot building. But the existing design was deemed problematic because it wasn’t considered ideal for studio space at the base–it was designed with bank-trading floors in mind–and because of the amount of infrastructure on the ground-level related to the PATH train station at the site, the people said.

If the tower got off the ground, it would also be a coup for Mr. Silverstein, who halted construction of 2 World Trade at ground level while he searched for a major tenant. While he would still need to secure financing for the tower, if he did, it would be the final element of the 16-acre redevelopment plan that was crafted in the years after the Sept. 11, 2001 terrorist attacks.

Still, the interest by News Corp and 21st Century Fox signify a broader shift going on in lower Manhattan, which long struggled to attract new companies other than smaller firms looking for cheaper rents than in midtown.

In recent years, publishers Condé Nast and Time Inc. have opted to move there from midtown, as are advertising companies like GroupM, a unit of WPP PLC, which is moving to 3 World trade Center. In an unusual reversal of fortunes, many midtown landlords are now worried that young workers are warmer to downtown and places like Union Square, and they are worried about the large blocks of space tenants like Condé Nast have left behind.

The design of 2 WTC is derived from its urban context at the meeting point between two very different neighborhoods: the Financial District with its modernist skyscrapers and TriBeCa with its lofts and roof gardens. The design combines the unique qualities of each, melding high-rise with low-rise and modern with historical. From the 9/11 Memorial, the building appears as a tall and slender tower just as its three neighboring towers, while the view from TriBeCa is of a series of stepped green terraces. The building is aligned along the axis of World Trade Center Master Planner Daniel Libeskind’s ‘Wedge of Light’ plaza to preserve the views to St. Paul’s Chapel from the Memorial park.

The needs and requirements of its tenants are concentrated into seven separate building volumes, each tailored to their unique activities. The stacking creates 38,000 sf (3,530 sm) of outdoor terraces full of lush greenery and unprecedented views of the surrounding cityscape, extending life and social interaction outdoors. A public plaza at the foot of the building and access to 350,000 sf (32,516 sm) of shopping and restaurants in the adjacent transportation hub and concourses will ensure life and activity in and around the new World Trade Center. The modernist skyscraper and the contemporary interpretation of the pre-modern setback merge in a new hybrid and an exciting addition to the NYC skyline.
Credit:

In today’s NYT, Janno Lieber of Silverstein basically said that this is happening !

It certainly appears that this tower will be built!

Quote from the above-posted article:

Bisnow: Last Friday marked the 14-year anniversary of 9/11. Since then, we’ve seen a resurgence of Lower Manhattan. Where’s the WTC today?

Larry Silverstein: There’s a lot going on, both Downtown and here at the new World Trade Center. The most exciting is the activity of 21st Century Fox and News Corp at 2 WTC. That building contains about 2.8M SF and they will occupy about 1.4M SF of that in the lower half of the building. That lease is expected to be signed by the end of 2015. 3 WTC is about halfway up. That building should be finished by the end of 2018. [And all buildings will be fully rebuilt and opened by 2020.]

I love this tower! I can’t wait to read the news from those tickers on the side!

3 years is pretty good for a tower such as this.

I’m actually really starting to like the proportions of this tower. It really is a huuuuuuuuge building. Can’t wait to see cranes!!!

I agree, Atl. This tower will be stunning.

Once again, an architecture critic praises this stunning tower, contrary to the negative commentary by teenage buffoons on SSP and SSC who aren’t even from NY!

We need this modern masterpiece to compliment these ancient, colonial gems.

While not as old, these quaint little buildings near the site of 2 WTC will pose quite a contrast to the ultramodern 1,300 BIG tower!

A guy from Fox told me that this is essentially a done deal.

I can imagine that when 2 WTC finally resumes construction, it’s gonna quite a long time to get everything ready to go before it really starts to go vertical.

I wonder. The foundation is there, and it will be modified by multistory beams that serve an artistic function in the lobby.

It seems that it should go skyward relatively quickly.