The American Bible Society has placed its 180,000-square-foot Columbus Circle headquarters on the market.

The 12-story property at 1865 Broadway at West 61st Street, where the group has based its operations for 48 years, is expected to fetch $300 million or more. ABS then plans to lease a replacement office space or purchase another building. With the nonprofit’s departure, the new owner could scrap the existing building and construct a 300,000-square-foot residential condominium tower in its place, using surplus development rights on the site, according to Crain’s.

“The 1865 Broadway property has served us well for nearly 50 years,” ABS chairman Pieter Dearolf said in a statement to Crain’s. “The decision to sell the property was made to unlock the value of the site to further the mission of the American Bible Society.”

The nonprofit tapped Cushman & Wakefield’s Helen Hwang, Nat Rockett and Steve Kohn to market the property, located one block from Central Park and within a stone’s throw of the Zeckendorfs’ luxurious 15 Central Park West.

A buyer could pay north of $1,000 for the property’s development rights alone, and retail space in the building’s base could tap into the area’s high commercial rental rates, according to Crain’s.

“When you see a high-end development site it has to have the right zoning and scale, the right height and footprint, it has to be on a corner and have a presence, and it has to be near marquee amenities like Central Park and the river,” Hwang told Crain’s. “This site checks all of those boxes.”

This tower will be awesome! 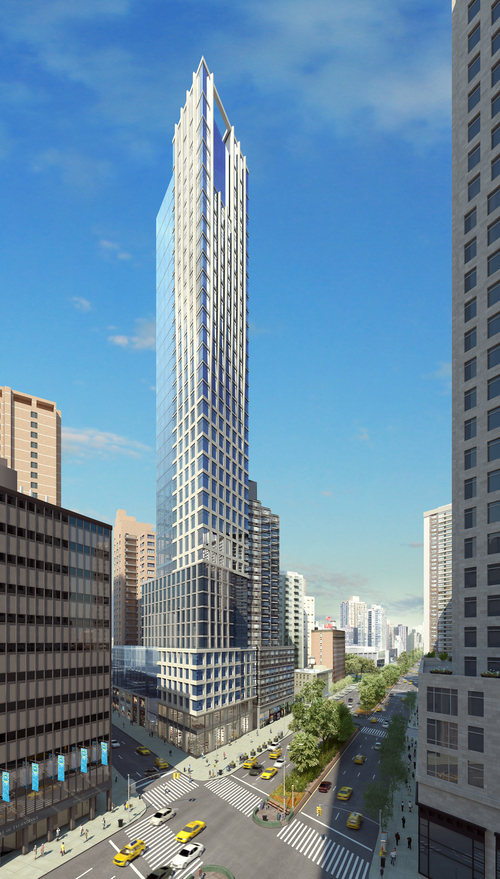 YIMBY featured a sneak peek of 1865 Broadway’s potential earlier this year, with renderings by Danny Forster Design Studio depicting the reconfiguration and vertical extension of the building. Since then, the site’s current occupant — the American Bible Society — has elected to leave the location for a new building, opening the possibility for a skyline-altering icon to take its place.

Now, we have the first firm look at a proposal for the site, designed by Goldstein Hill & West, which would involve the total demolition of the old structure. The new building would stand approximately 40 stories tall, but the height would be accentuated by palatial ceilings, like many other new skyscrapers rising across Manhattan. GH & W could not be reached for comment, but the tower appears to rise between 600 and 700 feet, and would stand on the corner of Broadway and West 61st Street.

1865 Broadway’s location is fantastic, which should guarantee an attractive design. The rendered proposal features a relatively simple envelope, rising with several setbacks, and the facade features a mix of glass and masonry, likely limestone. This is especially apt considering the record-setting 15 Central Park West, aka Limestone Jesus, is directly across the street, and is deserving of equally attractive neighbors.

The site’s development potential measures approximately 300,000 square feet, and will likely include retail along Broadway. Even 15 Central Park West, where a penthouse sold for $88.5 million in 2013, has active retail in its frontage on Broadway. While many expensive apartments may sit unused for much of the year, a building’s engagement with the street below is what matters to pedestrians.

What’s ultimately most important, and often overlooked, is human density: the increasing amount of space taken up by the average New Yorker translates into less efficient use of air rights, which results in fewer people per square foot of real estate. This is most certainly a good thing, as average standards of living are increasing and city residents no longer live in slums, but it shows how a building code created in 1961 did not anticipate the world of 2014, where significant new construction is needed to maintain even constant levels of population density.

Zoning is the primary reason New York City city is facing a housing shortage. 1865 Broadway presents an opportunity to enhance a corner that was the victim of post-war anti-urban design, and if the GH & W proposal is built, the new tower will restore the architectural street-wall that characterizes Broadway along most of its path through the Upper West Side. But the location, next to the local and express subways just two blocks from Columbus Circle, warrants square footage beyond the scope that’s currently allowed.

As of May, the American Bible Society had placed its building on the market for $300 million, and property records indicate it has not yet traded hands.

I love this building and its relations to Broadway NYC! BUT, how about B r o a d w a y St. Downtown LOS ANGELES?? This building DTLA would stick like bees to honey!

The American Bible Society has sold its New York City headquarters building near Columbus Circle to AvalonBay Communities Inc. for $300 million, a price that will pay for the nonprofit organization’s move to Philadelphia and allow it to reinvest in its services.

The winning offer from real-estate investment trust AvalonBay was one of about 25 domestic and international bids for the building, according to Cushman & Wakefield Inc., which advised the American Bible Society on the sale and its relocation.

AvalonBay’s plans are still being shaped, but the company intends to raze the existing building and construct a high-end residential development with retail space at its base, Mr. Piazzola said.

Located a block from Central Park, the American Bible Society building sits in an area of exclusive, ultraluxury high-rises, a far cry from the neighborhood the nonprofit found when it moved there from Park Avenue in the mid-1960s.

“For a site of this size and scale and in this location, typically developers have to assemble it,” Ms. Hwang said. “It’s very rare for a development site of this quality to come to market as one piece.”

Over the last decade, many new hires with the Bible society opted to work in the organization’s Valley Forge, Pa., location because it was more affordable than New York, aid Roy Peterson, president and CEO of the nonprofit organization. Many of its New York staff live in New Jersey, he said.

“I wanted to bring the whole team together in one place in order to be really effective to deal with the changes in the digital world,” Mr. Peterson said. “Philadelphia presented a really dynamic city and [is] much more affordable than New York and a fairly easy relocation.”

The Bible society, which aims to broaden the Bible’s readership by translating it in different languages and making it digitally accessible, will keep a presence in Manhattan and is shopping for office space now

The society plans to lease its new headquarters in a Philadelphia neighborhood filled with historic attractions, which Mr. Peterson said was only fitting. “People come to New York for shopping, for Broadway,” he said. “They don’t come to New York to learn about our nation’s history or the Bible.”

I hope they build at least a 300m tower!

I think 600-800 feet or so is most likely. The site doesn’t have enough air rights to go taller (unless it is unimaginably thin).

Have you seen the renderings?

There’s been no activity since our friend with a crush on John Stamos! 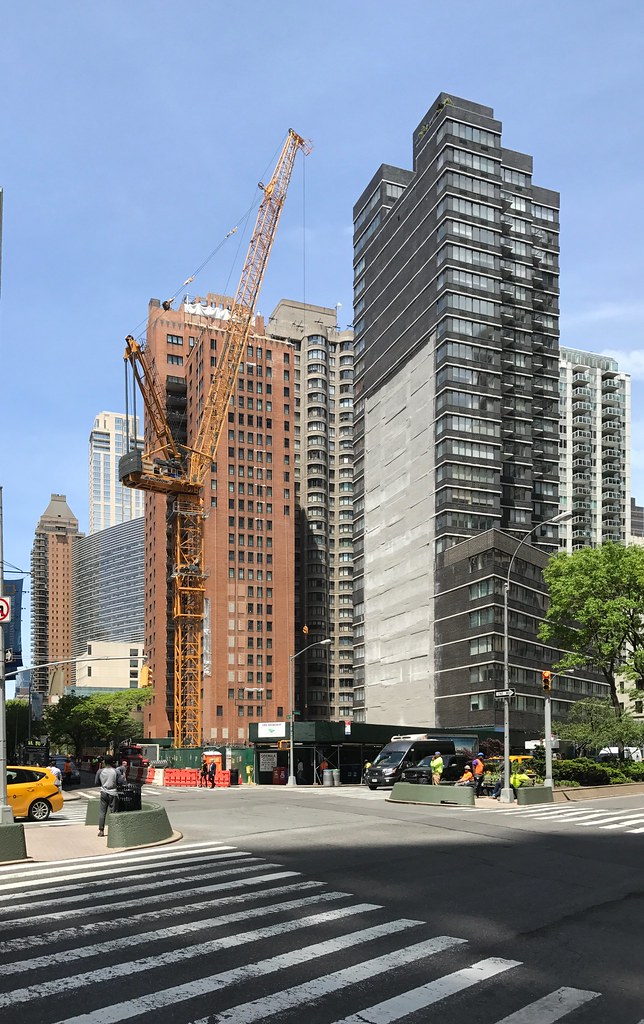 Oh my gawd, is that hole for this project? Furthest south, near Columbus Circle, is the site of 1865 Broadway, a 33-story residential tower replacing the American Bible Society building. AvalonBay Communities purchased the property for $300 million in February of 2015 after the American Bible Society decided to decamp to Philadelphia. The concrete superstructure is its now two floors up and will culminate at 416 feet high. Skidmore Owings & Merrill (SOM) are the architects and its structurally-robust exterior is reminiscent of the former building which they also designed. 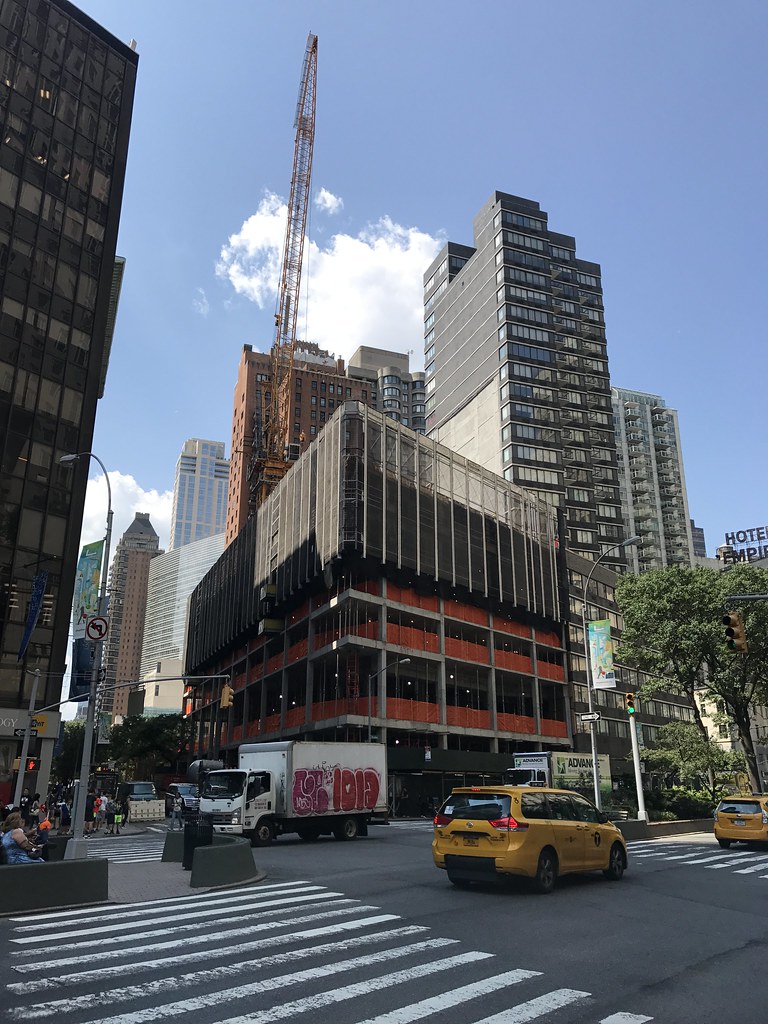 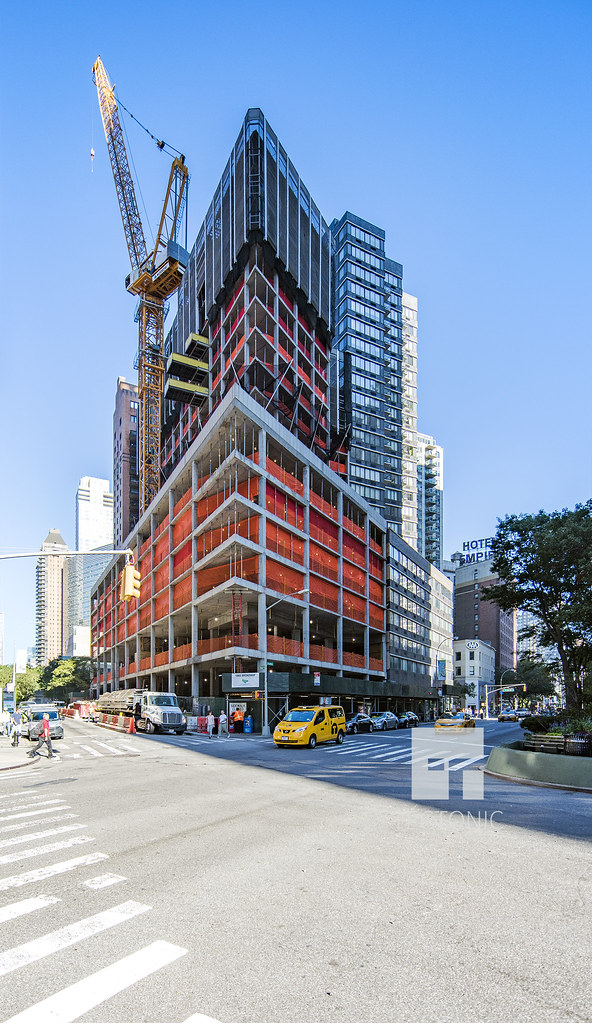 I got this one this past weekend from Columbus Circle.