22 Bishopsgate will be one of the largest office developments to ever be constructed in both London and the United Kingdom. Despite the tower now rising, it is still unknown as to exactly what will be the finished product upon completion. The overall size of the building will barely change due to the setback massing towards the top being filtered out to form a more rectangular block rather than with a set back crown.

The site was previously specified to helm a tower dubbed as ‘The Pinnacle’ due to its peak rising to the tallest spot within The City district. Designed by KPF, the tower was proposed pre-recession, and even began construction before the cores were capped just a few levels above ground. The Pinnacle was an expensive design, the footprint varied floor by floor driving costs upwards as well as making it awkward for companies searching for unified space. The majority of the glass panels were of individual scale and form due to the snake-skin curtain walling and flared form. A signature tower of London which never came to be.

With the economy on the up a few years later, the site was up for development again to rise a new tower. Over a decade later from when this development was proposed, tenancy contracts were coming to an end, older building stock became evermore outdated and further sites were becoming more available within The City district. Proposals such as 1 Undershaft designed to rise high and above made ‘The Pinnacle’ a redundant name which was later dropped in favour of 22 Bishopsgate. Long rumoured to be in redesign with a much more cost effective approach, the reveal displayed a much more conventional tower; blocky forms, sleek glass curtain walling with a much more bulky approach.

With this new approach to The Pinnacle site came much controversy. According to many it was monolithic with no respect to its surroundings. and despite the set backs forming towards the crown giving it a lighter touch, the proportions and restricted height gave it an awkward appearance. The new proposal was then later approved, with the future surrounding towers of London in mind. One of the arguments given was that the previous ‘Pinnacle’ design accustomed to the skyline from the previous decade, whereas the architects for 22BG had the future surrounding towers of the new decade and beyond in mind.

The plans for a revised 22BG were initially to use the current core and foundations of the capped of site, however this was not feasible with the new floor plates of which down came the core and up with a new.

Over a year later, with the tower rising multiple floors upwards, a revised design of the new 22 was put forward to the council towards the end of 2016. Ridding of the setback crown to form a more rectangular appearance with a height decrease, the design was aimed to dampen the impact of its mass on the skyline as well as forming a middle ground between the lower towers and One Undershaft as the heights swivel upwards. It was also due to apparent fears of it breaching flight paths even though the Aviation Authority have dedicated this site to host a 1000ft structure including tower cranes. The decrease in height may also bring down costs involved with them not having to construct as high. Despite a more simplified solution, it has since won many over as it integrates with the current cityscape more naturally whilst still holding on to its powerful presence.

Both sculptured by PLP, it is yet to be known as to which design will eventually rise. It is certainly not a given for the height decrease to be approved due to the symbolic nature of the sites initial intentions. Whatever will rise here however will dawn a new era of more conventionally designed skyscrapers towering high above the plateau forming a more consistent and balanced skyline

The view facing south down Bishopsgate. The 100 Bishopsgate development will block most of the view of 22BG from this angle:

The Crosby Square Entrance which leads out onto the base of The Cheesegrater, the square will eventually face 1 Undershaft towards end of the street:

The podium fronting Bishopsgate. Large vertically ribbed columns bare the weight of the tower above, giving off a lighter yet grander approach from the street, the pillars also pay homage to the surrounding historic pieces of architecture which still stand proud amongst the skyscrapers.

The observation deck which will sit directly below the roof of the tower on the very highest of floors. The double height room will allow uninterrupted views of the city towards the south and west despite strong competition from neighbouring structures:

This mock-up of the facade consists of the exterior curtain glass, ventilation panels as well as the blinds which will wrap around each floor. The red blind holders are similar to those used on The Shard which are said to be the preferred colour by Londons planning department as they add warmth to the blue, cold glass facades.

The view of The City districts skyline showing the impact that 22 Bishopsgate (proposed height decrease version) will have on its surroundings:

Photo taken by me of the tower under construction:

Information, a brief history of the site and renders have now been provided

Has the design changed again?

It’s a proposed height reduction of the current design brining it down to 58 storeys, it will contain the same amount of square footage but it has been filtered throughout the tower rather than on top. It has yet to be decided as to whether the height reduction will go ahead.

But the tower looks different too. It’s boxier.

I agree! I was so disappointed when the first proposal was replaced, but after a while it’s grown on me and I think it looks really smart now

Is this proceeding or are they still awaiting planning approvals? Also, will they build without an anchor.

Planned City skyscraper 22 Bishopsgate taken down a notch over fears of plane...

A new skyscraper planned for the City has had to knock a few floors off the top, over fears that [...]

PLP has submitted revised plans for its tower at 22 Bishopsgate, reducing the skyscraper’s height by 23m

It’s still underway and is rising at quite a rapid pace. The proposed height decrease has had no effect on the performance on construction. In regards to tenants, I believe this building is being built speculatively and is designed to host many smaller companies rather than large anchors.

In regards to fears of flight risks with its height, I’m not quite understanding the reason behind it. This site is dedicated by the Aviation Authority for a 1,000ft structure much like The Shard and 1 Undershaft. The Shard is just over 1,000ft due to it sitting in a dip. The height cap includes the limit as to where a tower crane can peak which is why 1 Undershaft (290m) and 22BG at heights 288m and 278m were approved as they gave leverage for such a crane. However such a height decrease to 255m makes no sense when there’s a 148ft clearance, a tower crane above would not fully fill this gap. Perhaps it’s more of an excuse so that they don’t have to spend as much constructing higher?

Indeed it is! 100BG appears to be racing ahead so far, exciting times for is area with at least 3 towers rising

Is the Generali Tower on Fenchurch St rising?

How about the Mitsubishi Tower and the Batman Tower?

The Generali development will be in a later phase of projects on here as it’s more of a mid-rise for The City district at roughly 70m tall, at the moment I’m concentrating on the big ones to bring in the interest. Although I may make some acceptions so stay tuned

Mitsubushi Tower will be one of the next 3 towers I will be making a thread on. Unfortunately the Batman/Gotham tower has been cancelled due to Brexit fears

Were the buildings on the Batman site razed?

What’s the address for that site anyway?

Thanks for the updates.

40 Leadenhall Street, I believe they’re still standing from memory of my last visit 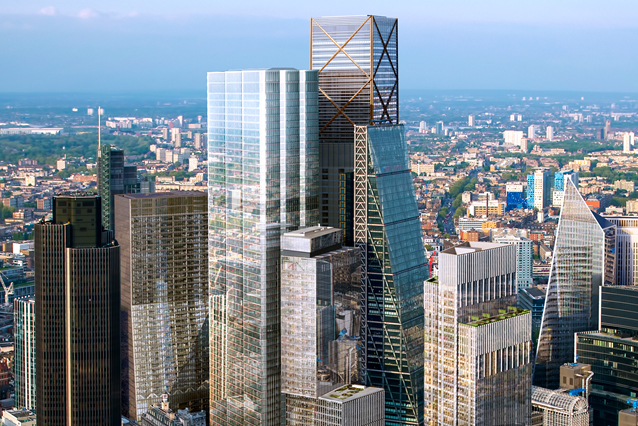 22 Bishopsgate to have 57 lifts

Otis has won a contract to install 57 elevators and 10 escalators at 22 Bishopsgate, set to reign briefly as the tallest building in the City of London.

The new Mitsubishi Tower in front of 22 Bishopsgate looks great! I like the setbacks and cantilevers.