Forest City’s $500 million 690 Pohukaina mixed-use project in Honolulu’s Kakaako neighborhood, one of the first projects out of the gate at the start of the current condominium boom, could include a public elementary school, the head of the state agency overseeing the redevelopment of the area told PBN.

Anthony Ching, executive director of the Hawaii Community Development Authority, recently told PBN that the 690 Pohukaina project will include a mix of uses, including market-rate rentals, below market-rate rentals — and perhaps an educational component.

Ching declined to go more into detail regarding a school site at 690 Pohukaina, although the Kakaako area, which will gain thousands of new residents in at least a dozen or so condos being built in the coming years, will likely need more schools.

Seagulls Schools plans to build a new preschool campus in Kakaako near the intersection of Kelikoi and Cooke streets that may include kindergarten through third grade classes as well, as first reported by PBN. The “Kakaako First School” is expected to start construction in the middle of this year.

Linda Schatz, development manager for Forest City, recently told PBN that its 690 Pohukaina project, which at one time was to include the state’s tallest building at 650 feet but will top out at 418 feet according to local laws, is still in the discussion phase with the HCDA. 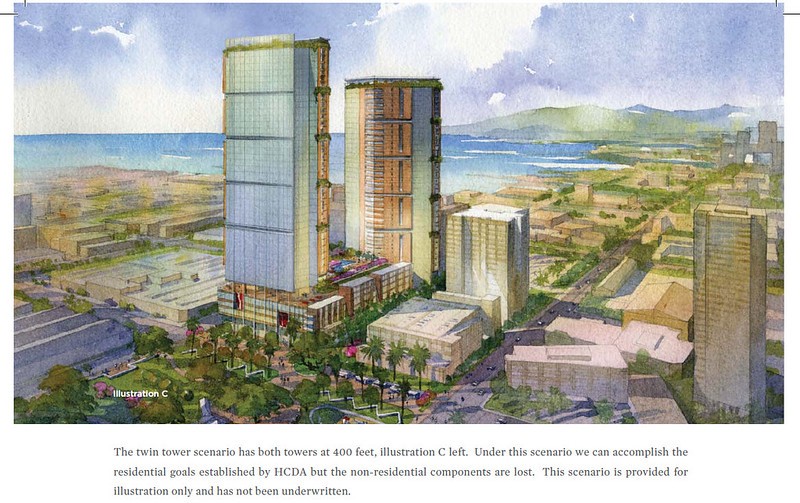 Very nice and dense development. The design also seems more thought out from the regular all-glass cladded rectangular volume. The hanging gardens are also fantastic, for sure this project will inspire more similar designs around the city.

this development would shift the skyline further west slightly south, that area is kinda industrial looking now if it is where I think it is (drawing is not a good depiction of area.