The trio would be clustered in a horseshoe around a 20,000 square-foot park opening onto Locust.

Phase Three is both big and small. On the small end is four banks of four-story townhouses at 235 West Oak Street, for a total of 24 homes. On the tall end is 205 West Oak, a 42-story building with 340 new homes.

Phase Four is another bank of six townhouses, lining another 20,000 square-foot park. Behind that, a 30-story tower at 312 West Walton Street, sporting 340 new homes.

Phase Five has the fewest buildings, but is the most ambitious. A pair of towers at 300 and 310 West Oak Street connected by a parking podium. 300 is 55 stories with 633 homes, and 310 is 47 stories with 508 homes. There’s also separate dog parks for large and small critters, and an off-street cul-de-sac to keep the vehicles for those 1,411 new homes from clogging up traffic. This part of North Union will be right next to Walton Payton High School, in that big grassy field that you’ve seen a million times while cruising north on the Brown Line, looking for the big “34” on the side of the school.

North Union Looks Like a Big Project in a Modest Space

The plans for the new North Union project have been laid out for everyone to see.  It will cover five city blocks just west of the Moody Bible Institute in Chicago's Near North neighborhood.  The land was formerly owned by the Institute,...

JDL Development Reveals Plans for North Union Complex in the Near North Side...

JDL Development has revealed its plans for its proposed North Union development in the Near North Side. 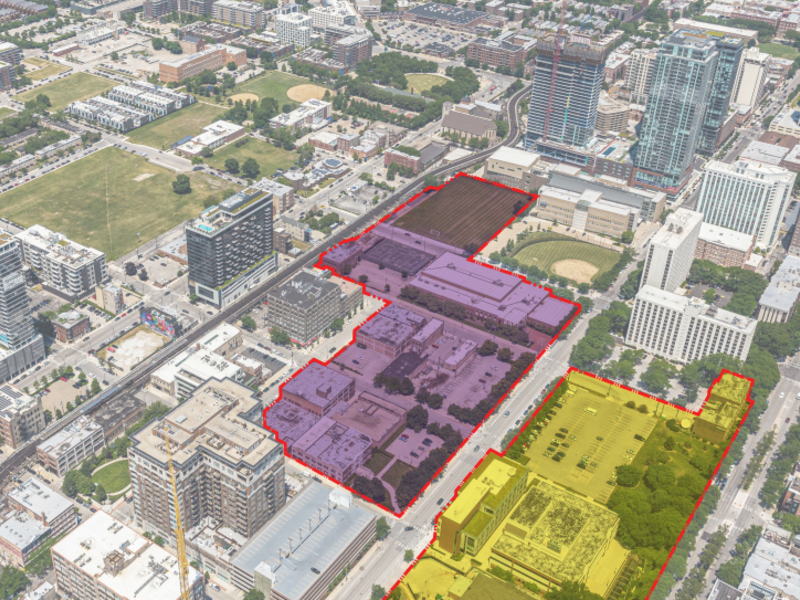 Nearly 2,700 homes planned for Near North Side site

The project would be one of the biggest residential developments in Chicago in decades, and the largest for its builder, JDL Development.

I was hoping for so much more after JDL pulled off One Chicago. This era of mega-projects needs to stop. We are limiting the future of large parts of the city to a singular budget, vision and priorities. We have zoning laws for everything except not allowing developers to buy huge sawths of land and sit on them for decades as they roll-out phases. Seeing these sites parceled out lot-by-lot and restoring them completely to the grid should be the goal of the city.

After watching the meeting it was clear that Jim Letchinger’s statement of trying to fit in rather than stand out is on full display. This trend of building heights, materials and scale having to reference and “respect” nearby existing buidlings is super-restrictive and constrains ambition. To hear a developer speak so proudly of keeping heights and densities as low as possible is the antithesis of what the end goal should be for creating a so-called world class development.

These boxes that must be ticked to appease alderman and community extremists are absolutely destroying innovation and have fostered an era of banality I would have believed was unimaginable in Chicago with its historic architectual superiority. Chicago needs to seriously address its deficiencies with other global cities when it comes to planning, design and scale.

These are some of the disturbing similarities that I see with development all over the city:

And on and on we go…

These projects are just today’s Sandburg Village, Cabrini Green and Dearborn Park. Pre-planned ready made communities are not high quality, dense urban developments. Our greatest accomplishments would be impossible to build today because of the stranglehold that stakeholders have over land-use. No way could you build Sears Tower in todays’ Chicago that was 4 times taller than anything around it when it was built. Or Aon that was pretty much all alone without precedent for building that tall in that area.

An online meeting is planned for March 24th at 6 pm.

Welcome! You are invited to join a webinar: North Union Community Meeting....

Welcome! You are invited to join a webinar: North Union Community Meeting. After registering, you will receive a confirmation email about joining the webinar.

What a beautiful project.

A large, underutilized slice of downtown Chicago is about to get utilized out the wazoo.  Detailed paperwork has hit City Hall for North Union, the hefty plan to turn a five block slab of Near North Side property into the city's latest mega...

The multiphase North Union project is one step closer to transforming Chicago's Near North Side. JDL Development has shared its latest (and presumedly finalized) version plan before its seeks zoning approval from the city Slated for 8.1...

More information and renderings can be found here:

The plan to plant five blocks of downtown Chicago with seven skyscrapers and high rises has been approved by the Chicago Plan Commission.  Look for the project name "North Union" to start popping up in a few months on construction...

The developer of the 2,700-unit project has acquired part of the site and plans to break ground on its first building in March.