For a long time coming, the Delaware River Waterfront Corporation has dreamed of having Penn’s Landing redeveloped and having its potential fully realized. Recently, these dreams of been getting closer and closer to reality. A planned two block cap over. I-95 will reunite Old City to the Delaware River. Perhaps more exciting, though, is the planned mixed-use neighborhood that could be built on the waterfront. Many developers are competing for the rights to build this mega project, each with different designs. Among top competitors is NYC’s Durst, Hoffman and Associates our of DC, and Josh Harris from the Philadelphia 76ers. Below are some articles about developers’ different plans for the site:

The company said it offered a proposal for the Penn's Landing property owned by a government-affiliated nonprofit.

The Sixers are promising to bring thousands of apartments, a hotel, two museums, a dozen restaurants, a supermarket, a new public school — along with that 19,000-seat arena — to the waterfront.

The winning bid for the coveted Delaware Riverfront parcel is expected to be revealed by the end of the month.

The 76ers proposal is by far the most controversial. In addition to a mixed-use neighborhood, Harris also plans on building a new arena on the most prime spot in the redevelopment area. Many are worried about where parking will go, and how it is less accessible to get to than the practical sports complex in south Philly. I my personal opinion, I would not be happy seeing the arena get built.

The Penn’s Landing Development is of such large scale that it would rival that of Schuylkill Yards and 30th Street Station District on Philadelphia’s other riverfront.

Here are some reason renderings of Hoffman’s plan for the site:

This iteration of the proposals would be a great one to see, so much density, and a lot of skyscrapers that will really help the skyline stretch from river to river.

And here’s a rendering of what a potential arena could look like:

A number of projects have been proposed for the Delaware Avenue corridor. YIMBY breaks down the new developments that could begin breaking ground soon.

The article mentions some of the developers competing for development rights.

image1970×1376 843 KB
The four proposals that are being reviewed today. One of these will win and I hope that whatever does starts construction quickly.

And I’m a little late to the news, but Durst won! Below are some renderings a picture of a WHYY Article, it’s going to be really transformative, the Schuylkill Yards of the Delaware River!

The Delaware River Waterfront Corporation said it chose the Durst plan because of its compatibility with the master plan for the public waterfront.

We also now know that the height for the tallest tower will be 703 Feet! The range will be from 175-703 Feet for the major towers:

Philly YIMBY reports that site clearance is in progress at Penn's Landing redevelopment in Center City.

I don’t think these towers are going to fully start until 2022, but good to see this happening. The park will begin construction soon, then the buildings. Also, we might get some more updated renderings of the project in the next few months, and should give a look as to what the project will actually look like 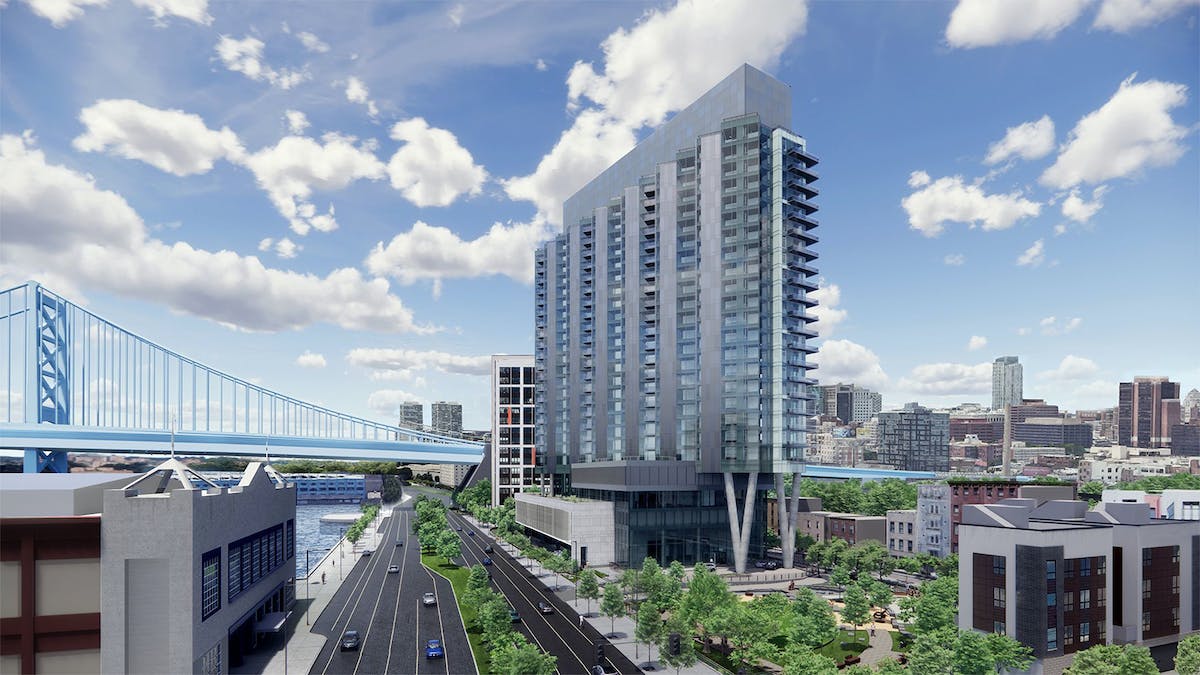 Designed by NYC-based Handel Architects, the proposed residential high-rise near the Delaware River waterfront will offer 360 residential units, a 116-space parking garage, and 10,000 square feet designated for shops and restaurants, reports The...

Thanks for sharing, this is actually north of the Ben Franklin
bridge and isn’t officially a part of the redevelopment. If there isn’t already one, 300 North Columbus could be its own thread

There was the talk this week about National Real Estate (currently developing Market East) acquiring property in the dead zone on 2nd street between Old City and Northern Liberties with early planning for a major redevelopment. Why comment about it on this thread? Because this is a meaningful net positive for the riverfront in general and Penn’s Landing in particular. By improving the surrounding areas, the value of the Penn’s Landing property increases and the momentum for redevelopment here grows. This is a big deal.

It would be so great for connecting Northern Liberties to Old City to the riverfront (with this development). Once this connection has been made, even more development will take place in the current dead zone, which will be amazing to see

This article says that the first phase of the development will have a 14-story tower at the southwestern corner of 2nd and Spring Garden, plus another 23-story tower farther south on 2nd Street, so that project will get its own thread now.

Wow. This project is massive! This along with the west development would change the city forever.

Construction of Penn's Landing Park postponed by two years to 2023

Don’t even get me started on how much this angers me…I just hope Durst can get their act together and start on the residential/mixed-use portion before this.