Queens Clock Tower, Once the Tallest, Helps a 77-Story Skyscraper Rise Next Door

The Metropolitan Transportation Authority is transferring 477,000 square feet of development rights from a new tunnel to Grand Central Terminal, at left, so that a 77-story apartment tower can rise next to a historic clock tower.

The hands have not moved in decades, and the lights behind them went dark a year ago. But the gargoyles still glower atop the Long Island City clock tower, alongside its castellated turret, copper windows and granite shields.

Fourteen stories is nothing in today’s booming neighborhood, but until 1990, the brown-brick structure at 29-27 Queens Plaza North was the tallest building in Queens. Even still, it transfixes residents of this low-slung borough.

“Since I was a boy, I’ve probably passed by that building thousands of times in my life, like so many people in Queens,” said Jimmy Van Bramer, the local city councilman. “It was a landmark from the very beginning.”

It was hard to miss, standing virtually alone at the mouth of the Queensboro Bridge and the bend in the elevated Flushing and Astoria subway lines. Even as it was hemmed in by larger buildings, the clock tower still stood out.

Now it will be truly overshadowed. A 915-foot skyscraper — the city’s tallest outside Manhattan — is about to sprout on its doorstep. Yet the connection is no coincidence: The clock tower is helping make this 77-story glassy giant possible.

The new 930-unit apartment building, designed by SLCE Architects and described as “Manhattan caliber” by its developers, is relying on land and air rights from the clock tower, as well as another, unexpected source: the Metropolitan Transportation Authority — this despite the reservations of some of its board members.

Without the deal, the project could only reach 38 stories, shorter than many of the new towers it will now loom over.

When a consortium of developers bought the clock tower and two neighboring plots in November, they hit upon a novel idea to create their Queens colossus. With tight budgets and a mandate to capitalize on its real estate holdings, the transportation authority was happy to oblige.

Last week, the authority’s board approved the transfer of approximately 477,000 square feet of air rights to the developers for just under $56 million. The rights came from an adjacent lot where the agency has dug a hole nearly as deep as the clock tower is tall. Through it runs a tunnel that will bring the Long Island Rail Road into Grand Central Terminal.

The Long Island City clock tower, which has loomed over Queens Plaza since 1927, was the tallest building in Queens until 1990. Credit Uli Seit for The New York Times

The 90+ story version probably would have been supertall… can’t believe they were that close to getting the air rights for it!

From yesterday. Still nothing being done on the clocktower site.

I assume that they are waiting on the mta site next to it to close up that hole to the tunnel. Then maybe they can start building the tower.

Andrew Scandalios, Christopher Peck, Eric Anton, Rob Hinckley and Jeff Julien are marketing the property. Sources confirmed the listing to The Real Deal but pricing was not available, and a representative for PMG could not be reached for comment.

PMG and Hakim paid at least $133 million to assemble the shovel-ready site in the Queensboro Plaza neighborhood, which has a 15-year 421a tax abatement in place and $35 million in brownfield tax credits, Queens Beans reported.

In November 2014, PMG picked up a large portion of the assemblage at 29-37 41st Avenue for $46.3 million, as TRD first reported.
Maloney’s firm then bought the adjacent clock tower site for $30.9 million. Property records show the developer then paid $49 million to the Metropolitan Transportation Authority for several parcels, plus an additional $6.7 million for air rights.

The developers got as far along as to hire the Marketing Directors as new-development consultants on the project – known as Queens Plaza Park – where about one-third of the apartments would set aside as condos.

well, that stinks. Hopefully whoever picks up the site won’t downgrade from what was teased.

Hopefully someone like JDS will pick this up and get SHoP to design something great like at 340 flatbush.

Hopefully. This is a prime location, and LIC is overdue for a super tall. Way overdue.

Can’t agree with you more Chris

Aren’t there two towers proposed for Queens over 900 feet? Or am I mistaken?

Either way, I really hope this gets picked up by another developer who will take it even higher!

I couldn’t find a thread for this tower here, but according to FAA proposal submissions from April 4th, this will be the first Supertall (not a solid 1000 feet, but 300 meters) in Queens. YIMBY Article: 79-Story Tower Planned at 23-15 44th Drive in Long Island City FAA submission United Construction & Development Group: Court Square City View Tower [quote] […] It will contain 660 luxury residential units and 100,000 square feet of commercial spaces. It’s a 78-story high rise with total s…

Ah ok, I thought so!

Does that one have a much better chance of rising?

Still nothing going on but there was a green fence here that someone has taken down. ( or maybe a car crashed through it or something). I think they are still working next door above the east side access tunnels. There is still a large crawler crane on site there.

this project will not move forward under the current developer, unless it has already been bought by another developer.

Good point. This site has changed hands a few times. Seems like no one wants to actually develop it.

Happy yimby bday btw. Have we always had that flair for anniversaries here? 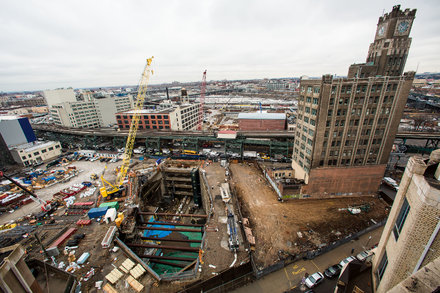 The Durst Organization purchased the historic building after the original developers said they “didn’t have the horsepower” to complete it. 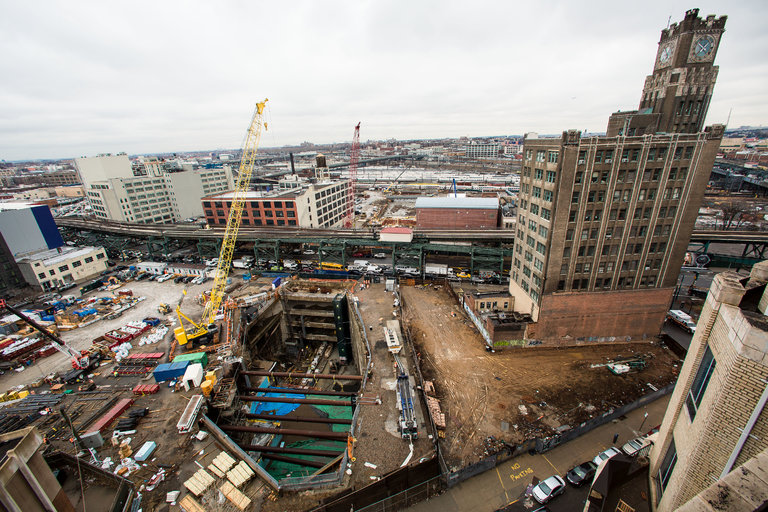 Last week, the developers of what was planned as the city’s tallest tower outside of Manhattan gave up and sold their site next to the historic clock tower building in Queens Plaza to the Durst Organization for $173.5 million.

The developers, Kevin Maloney and Kamran Hakim, spent nearly three years buying land in Long Island City for the $750 million skyscraper. But, Mr. Maloney said in an interview this week, “we didn’t have the horsepower to get it done.”

The Dursts said they would erect a rental tower that may be just as tall as Mr. Maloney had planned, 914 feet.

The sale was the latest evidence that things are getting more difficult for developers: The market for high-end condominiums and rental apartments has slowed, costs have gone up and construction loans have been harder to get as dozens of new buildings open in neighborhoods throughout the city.

On Tuesday, Gamma Real Estate acquired the site at 3 Sutton Place on the Upper East Side where the developer Joseph P. Beninati had planned to build a deluxe 950-foot-tall condominium tower.

Mr. Beninati’s project defaulted on its high-interest loans and fell into bankruptcy.

Last spring, Mr. Beninati lost a smaller condo project to his lenders at 515 W. 29th Street on the West Side.

The real estate market had become somewhat turbulent as owners and lenders awaited the outcome of the presidential election, said Ross Moskowitz, a real estate partner at Stroock & Stroock & Lavan.

It does not help that the city’s 421-a housing program, which offers generous property tax breaks to developers who earmark a block of units for low- and moderate-income tenants, expired in January.

“Though the dust has settled nationally,” Mr. Moskowitz said, “interest rates have started to rise. There is also uncertainty over local issues like 421-a. As a result, some owners and investors are looking for new sources of capital, bringing on new partners, or even selling prime assets.”

Mr. Maloney, who sold the Queens clock tower site, is completing another, 45-story building in Queens Plaza. But his acquisition loan was coming due on the clock tower project. And he was unable to get a construction loan after spending almost $160 million unless he put in more equity, so he decided it was best to sell.

“There’s no denying the high-end market has slowed down,” he said. “The good news is that land prices should start coming down.”

For deep-pocketed developers like the Durst Organization, led by Douglas Durst, it is a moment of opportunity. In recent years, developers who build rental properties have often been outbid for land by condominium developers.

The Long Island City property is the fourth project begun by other developers that the Durst family has acquired in recent years. The family, which had long been known as a Manhattan office developer, recently started a $1.5 billion residential development at Hallets Point in Astoria, Queens.

“Acquiring distressed sites allows us to build rentals and make the long-term investments that have served us well for more than 100 years,” Mr. Durst said.

Not sure how long the shed has been up in front if the clocktower? Maybe it has been there a long time. But since my last pic above from Nov, you can see someone has cleared the site of all the overgrown vegetation.

Durst wants a new 421-a before proceeding.

[quote][…]
Durst intends to build a one million square foot 1,000-unit residential rental tower under the proposed 421-a program if it passes. The proposed 421a program requires that at least 25% of the units be affordable. In addition to the tower, the site will include a half-acre public park and a renovated entrance to the Queens Plaza subway station. The transaction also included the purchase of the landmarked 49,300 square foot Queens Clock Tower Building.
[…]
[/quote] 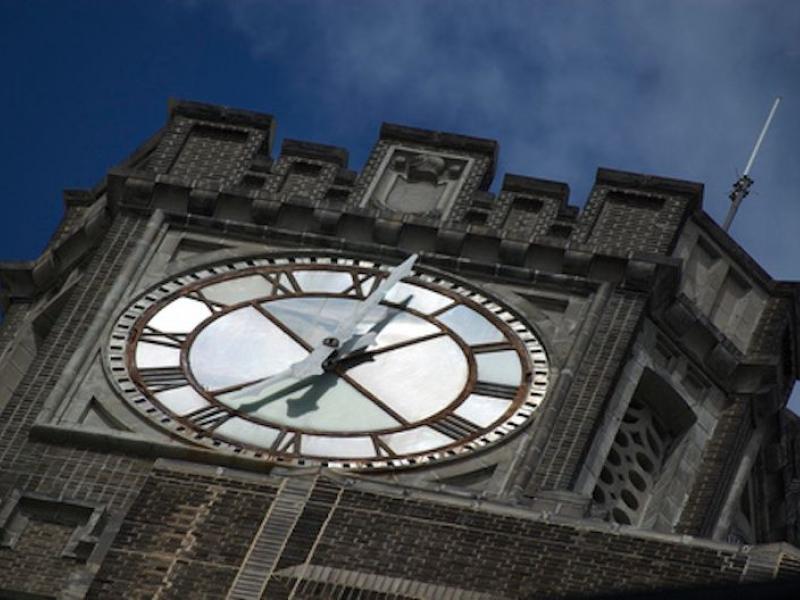 Durst acquisition could be home to borough's tallest building

Although Durst does not intend to build as high, its Queens Plaza North project is only slightly less ambitious. It seeks to capitalize on a sustained boom in the area, where low-slung warehouses are being replaced with office and apartment towers. The 102-year-old, family-run firm, whose holdings include 4 Times Square, 1 Bryant Park and a major stake in 1 World Trade Center, wants to build 1,000 rental apartments—not luxury condos as the previous owners planned—with a tower that could rise 750 feet into the air, enough to make it the city’s tallest building outside Manhattan.

Cityview Tower was knocked down to 752’ from its supertall status by the FAA. This is no coincidence.