The slew of renderings from the Stephens B. Jacobs Group continues; the firm has released another set of images for a new tower that will soon rise at 29-26 Northern Boulevard, in Long Island City. The Real Deal reported on the site’s acquisition by Simon Baron Development last month, and the lot was bought from the Rabsky Group for $54 million.

YIMBY covered the initial permits last November; the plans were disapproved in January. The DOB documents list the SBJ Group as the architect of record, and per The Real Deal, Simon Baron Development will continue with SBJ’s initial plans.

Per the DOB filings, 29-26 Northern Boulevard will total 382,120 square feet. 13,579 square feet will be dedicated to ground-floor retail, while the remainder will be divided between 415 apartments. The building will stand 45 stories and 473 feet tall, making it one of the most prominent towers in the Court Square vicinity.

SBJ’s website indicates that 29-26 Northern Boulevard — which is a mouthful — has been dubbed ‘QE7′ by the developer, which is apparently a take on the design concept and the building’s location, which is near the Q, E, and 7 trains. Specifically, SBJ describes the project as an “urban vertical cruise ship,” with amenities that will include “a two-story fitness center on the 2nd and 4th floors with lounge, gym, spa, climbing wall, pool, and [an] outdoor 5v5 soccer pitch,” in addition to “a covered outdoor half-court basketball court […] and a rooftop bar and lounge.”

While the laundry list of facilities seems to be comparable to the floating Queen Elizabeth, the location — adjacent to elevated train tracks — is a substantial departure from the high seas. Still, the development will be a positive addition to Court Square, and the vicinity surrounding the Dutch Kills park is seeing a mini-boom in its own right, with several projects rising in the adjacent blocks.

29-32 Northern Boulevard, the remaining building on the QE7 site

No completion date for 29-26 Northern Boulevard has been announced.

29-26 Northern Boulevard: Applications have been filed to begin excavation at the site of a planned 45-story and 415-unit residential building — with 13,579 square feet of retail — spanning 29-26 – 29-32 Northern Boulevard, in Long Island City. An existing two-story structure was approved for demolition in August, and the majority of the site is vacant.

Under construction. This will be one of the tallest on the LIC skyline. I believe they are calling the tower QE7 Correct re: QE7. It is going to be crazy how quickly LIC’s skyline turns into a cohesive beast. Right now the waterfront is impressive on its own and Court Square is certainly gaining prominence, but with the number of additional infill projects planned + CityView tower and PMG’s tower, the area will soon be more impressive than almost all major US Downtowns skylines.

Somebody needs to go out with a drone and capture all of this. With the infill, its whole blocks. The whole area is a construction site, and this is pretty apparent from the 7 train.

The cool part is that with everything in the pipeline, it looks like it will eclipse DoBro, which in itself is impressive. From a dumpy neighborhood that was full of warehouses comes a new lively place.

Nearby, the Sunnyside Yards are ripe for development. If we are lucky, it could be another Hudson Yards. If the city really starts to get serious about affordable housing ( I think so far its been underwhelming), that yard alone could support 100,000 units.

It would take awhile for LIC to surpass DoBro. DoBro has its prewar heritage, not to mention all the high rises from past few decades. However, LIC’s skyline might be more aesthetically pleasing because of how centralized it is around Court Square. Brooklyn’s skyline is sprawling even more now with Pacific Park being developed.

Taken yesterday. Lots of workers at this site.

7/11/16 A lot of work going on today. Some parts of the first floor already have rebar up. The foundation and the first piece of the tower crane are on site and ready, I’m assuming they are waiting for the actual crane itself to arrive.

View from under the N/Q line. Work is going on the second floor.

Crane is on site, should shoot up pretty quick!

This one is already above the 7 train tracks. 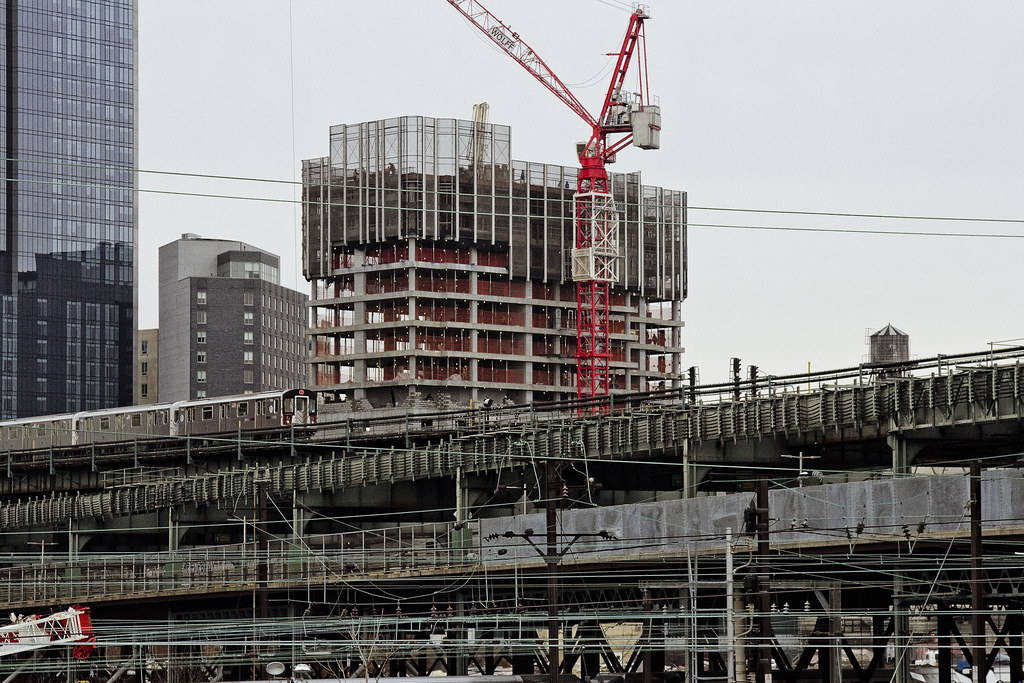 Great update. This one should be exciting, let’s hope for the best.

Yeah. It looks a bit dull right now but Im hoping for some nice cladding eventually.

I just noticed something. If you look at the original render and compare the neon blue/green lights that go up the building, they mimic the separation of the 7 and N/W trains right in front of it. Cant believe I never saw that before.

You’re right. I didn’t notice it either.

Would be even cooler if they could change colors and preferably have the left lighting purple for the 7 and the right lights be yellow for the N/W. Unless that would be too tacky?