The yellow-painted wall shows floors that have been demolished already at 130 William.

Curiously, it looks like there’s a piling drill on site. …

[edit: ] It seems to be for “INSTALLATION OF TEST PILES”, according to the permit.

Structural and plumbing permits have been filed for 130 William. They show 61 floors.

I dug into the latest permits. They mention 61, 60, and/or 54 total floors. Not 100% sure which is most accurate, but 61 is most common in technical docs, while 60 comes up in docs discussing housing units. They also mention approx. 800’ height, which doesn’t sound like 54 floors. It sounds like 60 floors + 1 mechanical.

I also found a permit from last year showing the following:

This specific plan was not approved by the city, but it seems to reflect what Lightstone wants to build.

With that huge public plaza and just 3-4 units per floor, this is going to be a relatively skinny one; much skinnier than I had previously assumed.

Has it been mentioned that the architect is GHWA?

They also did 56 Fulton just down the street, which is turning out nicely.

They’ve finally started on demolition of 94 Fulton St, which will be part of this project. The Lightstone Group ditched initial plans to build a hotel at 130 William Street and wants to turn the entire building into condominiums instead. Th 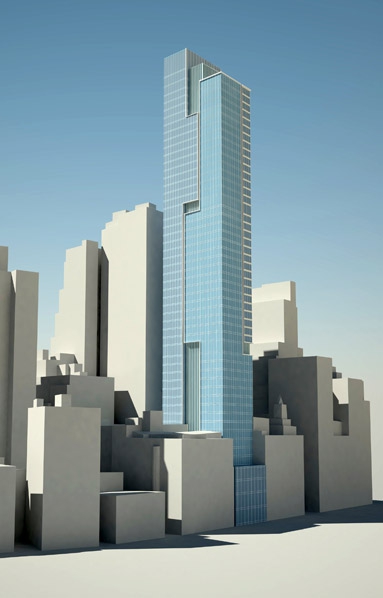 I hope to god this is just a massing

Same here. Downtown has been plagued with Kaufman and Peter Poon architecture. Two terrible designers. We need something nicer. Residentials have been okay, office as well, but the hotel sector has seen some rubbish lately. Example being some of the hotels rising near MSG.

could be worse, imo.

There are only about 6 stories left of the old 130 William.

Too bad they couldn’t get the little PoS next door.