Developer David Wolkoff expressed a desire to tear down the artist warehouse by the end of the year — and 5Pointz artists are planning a rally in its defense.

Now that the controversy over the towers that will rise at the site of the old 5 Pointz open-air graffiti gallery has quieted down, construction is soon to commence, according to the developer.

Architect H. Thomas O’Hara filed building permits this morning for the project at 22-44 Jackson Avenue. When reached by phone, developer David Wolkoff at G&M Realty told YIMBY that demolition will likely start in a few weeks, and groundwork and construction should begin in three to five months.

The two towers will contain a total of 1.2 million square feet of floorspace, the majority of which will be spread among the 1,000-plus rental apartments (the building permit put the exact number at 1,116, though previous reports pegged it a bit lower; in any case, around 20 percent will be let at below-market rates). The site will also contain nearly 40,000 square feet of commercial space, including retail and 20 artists’ studios, and significant amounts of open space.

5 Pointz in its heyday, which the Wolkoffs generously allowed to be used as a canvas for aerosol artists for years at rents far below market

22-44 Jackson Avenue will also contain a public garage with room for 262 cars. While so much parking is not ideal for a location with excellent transit accessibility, Wolkoff’s hands were tied by the city: in order to take advantage of the enormous 60 percent density bonus available in this part of Long Island City, which has no minimum parking requirements, he must build a 250-space public garage.

Construction will begin in three to five months on the twin rental towers at 22-44 Jackson Avenue, popularly known as the old 5Pointz site, as YIMBY reported last week.

But before it does, YIMBY got a new set of renderings for the project, which shed significantly more light on the development compared to the lone image that’s been released.

Both towers will feature beige stone (a mix of pre-cast and traditional) with glassy corners fronting on Crane Street, a representative from designer HTO Architect told YIMBY. They’ll each be topped by glass crowns containing penthouse apartments and mechanical space.

The two towers will have slightly different identities: the north tower will have taller, loft-style windows, while the south tower’s windows will be smaller and more traditionally framed.

The north tower will also have a glassier base, fronting Crane Street and Jackson Avenue, with retail space within. On the other hand, the podium of the south tower will hold the entire project’s amenity space. Affordable housing units will be spread throughout the two towers, with no separate entrance of the kind that sparked controversy at Extell’s 40 Riverside Boulevard, and a site-plan gives a detailed look into the development’s specifics.

Parking, which the developer is required to build in order to get a density bonus, will be tucked away on David Street, and shielded by a number of artists’ studios and displays that the Wolkoffs are providing to make up for the loss of the 5 Pointz gallery. The garage will be all but invisible on the dead-end street, which sits below the elevated railway trestle that carries the 7 train across Sunnyside Yard and on towards Manhattan.

The controversy over the end of 5 Pointz was grossly unfair to the Wolkoffs, who for years let artists use their property at below-market rents. But now that the furor has died down, the focus should be on the buildings that will soon rise. They’ll bring thousands of residents to a transit-rich area that’s been underpopulated for far too long, and – along with the smaller infill buildings sprouting like weeds – will be a huge step towards making Court Square feel like a real neighborhood.

THE DEMOLITION OF 5 POINTZ HAS BEGUN 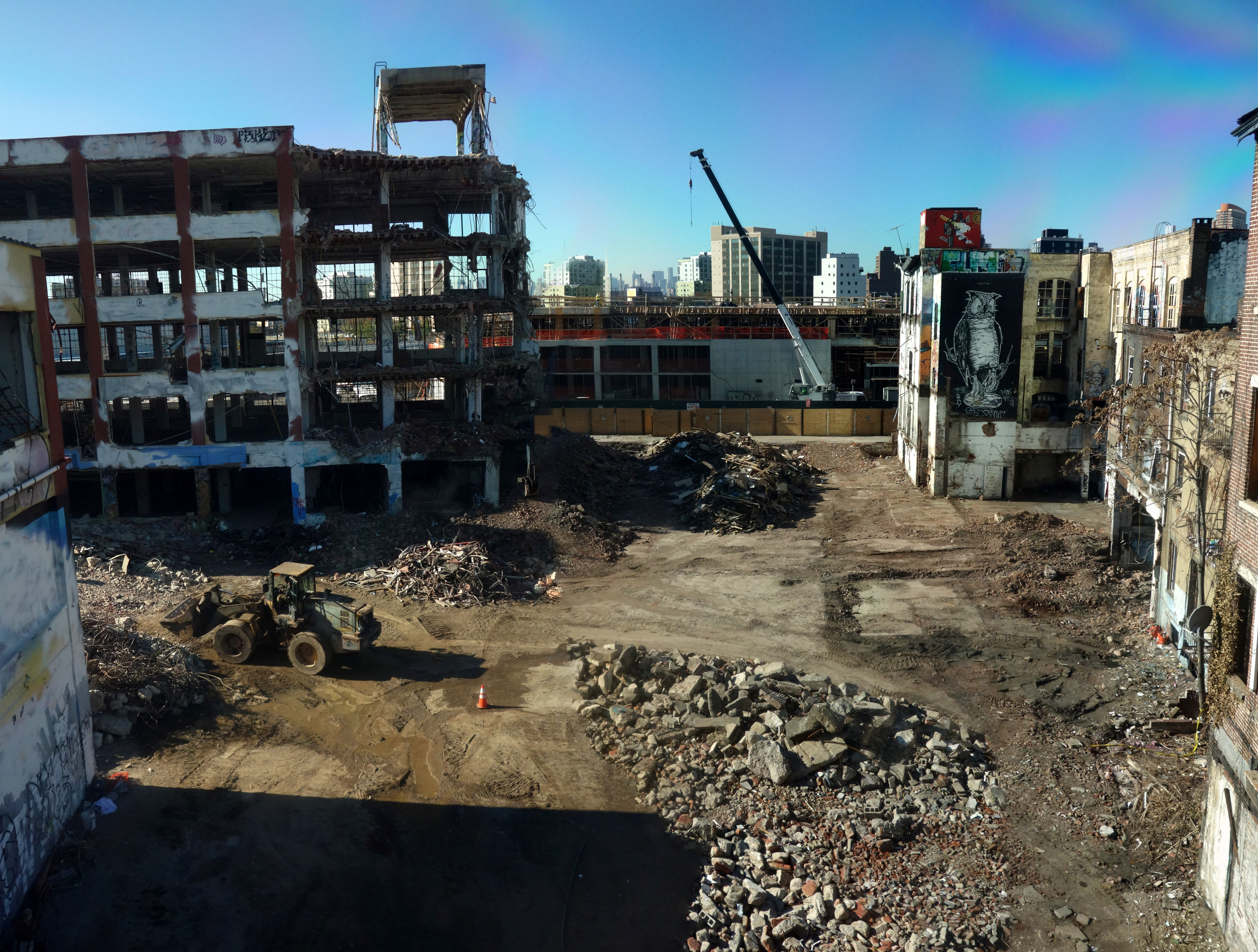 The developer, which owns the former graffiti haven that’s currently being torn down to make way for two rental towers, applied to have the term trademarked this spring for use on its future development — a move that the artists called insulting.

“To us, it’s like adding insult to injury,” said Marie Cecile Flageul, a representative for the 5Pointz artists who started the petition on the website MoveOn.org, where it had more than 1,900 signatures Monday afternoon.

“Even though we’re no longer at the Long Island City location, 5Pointz as an organization and a cluster of artists is still alive,” Flageul said, adding that G&M Realty owner Jerry Wolkoff was looking to capitalize on the name. “It’s not his to use and abuse.”

Artists and fans had looked to save the Long Island City complex from the wrecking ball, and were angered when the developer decided to paint over much of the artwork there in 2013 ahead of demolition.

But Wolkoff counters that he allowed artists to paint on the buildings for years.

“I have no idea why they’re so against me,” he said when asked for comment about the petition to stop his trademark effort.

He said the name “5Pointz” refers to the site itself, where he’s planning to build two new rental high-rises that will include space for street art. He’ll be inviting artists back to work there once the project is complete, he said.

“It’s the building that was 5Pointz, and the artists are coming back,” he said. “It will be the same, bigger and better than it was before.”

Wolkoff said the site was named 5Pointz as part of a “collaboration,” between him and head curator Jonathan Cohen, known as Meres One — though Flageul denies that.

“[Wolkoff] had nothing to do with creating the name 5Pointz,” she said.

Documents on the United States Patent and Trademark Office’s website show that G&M Realty’s application for “5Pointz” was turned down earlier this month because it was deemed too similar to another real estate company’s name. The developer has six months to respond or appeal, the document states.

Wolkoff said he hopes to have his future development open in 2017. Excavation work has finished, and we’re beginning to see foundation work underway at 22-24 Jackson Avenue, better known as the former site of 5Pointz.1 The Department of Buildings approved permits for the site on May 6, for a 48 story build with 977,086 square feet of residential space and 39,765 feet of commercial space for a total FAR of 8.00.2 According to the on site rendering, work will complete on the site in winter, 2017. 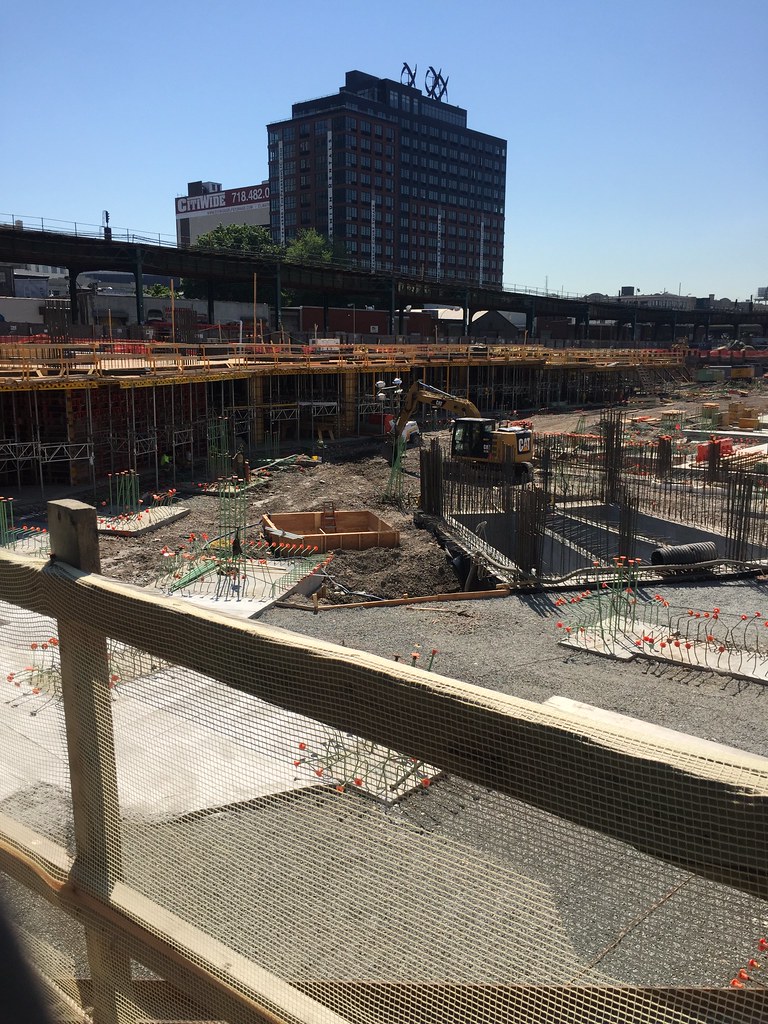 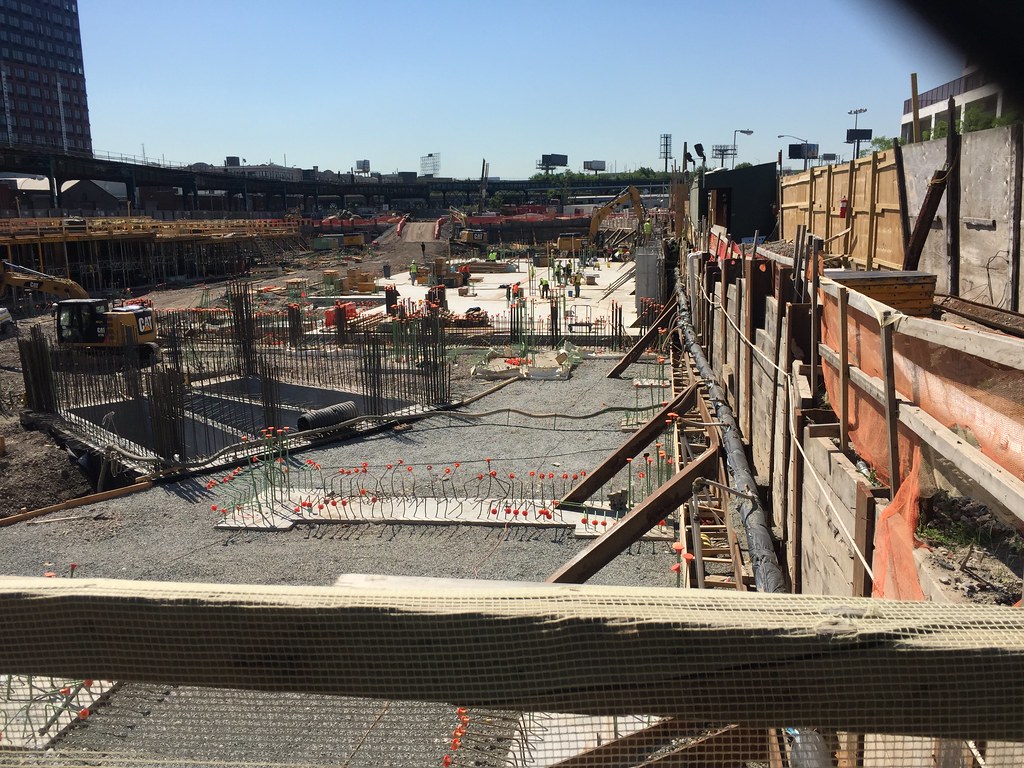 Great Update Tectonic! Perfect timing. I was just thinking that it was silly that i missed this massive project the other day while in LIC.

Today is LIC day. So many projects rising at once.

7/11/16 Taken from the 7 train, there has been progress since the last update.

I was there last night and it appeared as though almost half of the site (north half) is at or above steeet level. The south section is still at the basement. Wish i took a pic from the 7 train. That is the best vantage point to see the whole site.

North half is up to the 3 floor, south half foundation is being worked on.