The first permits are up for the redevelopment of 510 West 22nd Street, which is being designed by COOKFOX; the existing five-story structure is being converted into Class A office space, with the new building set to rise 11 floors. The Albanese Organization is developing.

COOKFOX’s plan for the site is impressive, taking advantage of the lot’s positioning next to the High Line and Midtown South’s hot office market. Private outdoor space will be split between “a double-height landscaped wrap-around terrace” on the second floor, a “seventh-floor cutout terrace” which apparently “softens the profile of 510 West 22nd Street’s ‘buoyant cube’ design,” and a rooftop garden, with the aggregate area totaling 14,000 square feet.

The official website notes the leasable floor area will measure 168,550 square feet, but permits give a slightly smaller figure of 138,250 square feet. While the existing structure only stands 67 feet tall, the replacement will rise 147 feet, placing the development around the average height of new projects along the High Line.

In terms of appearance, 510 West 22nd will be more contemporarily-minded than many of its new neighbors, and its facade will be dominated by glass, with the terraces breaking up an otherwise boxy massing envelope; masonry will predominate on the faces away from the High Line. The plan also aims to achieve LEED-platinum certification.

Converting the old building will benefit West Chelsea, as the warehouse was underutilized, and the space will also cater to smaller companies, who may not be interested in the office giants rising at Hudson Yards, to the north. With floorplates averaging approximately 15,000 square feet, 510 West 22nd Street will likely prove attractive to technology companies, and given the new permits, construction appears to be on the near-horizon.

Foundation looks complete. Should start to rise soon. I cant tell if the steel structure in the back is part of this development or something else?

The steel structure is for 512 W 22nd street: NEW YORK | 512 W 22nd St | 147 Ft | 11 Fl . Right next door, I was working on my map today and realized on my map that these 2 were right next door. Also, they are the exact same height and have the same amount of floors! My first thought was that this was the same project however, after a quick look on both of the pages I realized these were different projects with different designs. Crazy right?
Does anyone know if there is any reason for this? I mean they have different construction companies and developers.
It just seems like a crazy coincidence or height restrictions.

Bonus shots of Chelsea and the MePaD!

Here is an update from last Friday by field condition Construction is underway at 512 W 22, a warehouse to office conversion adjacent to the High Line. COOKFOX Architects are leading the design, which will convert the existing 5-story warehouse into an 11-story office tower. The massing features rounded... 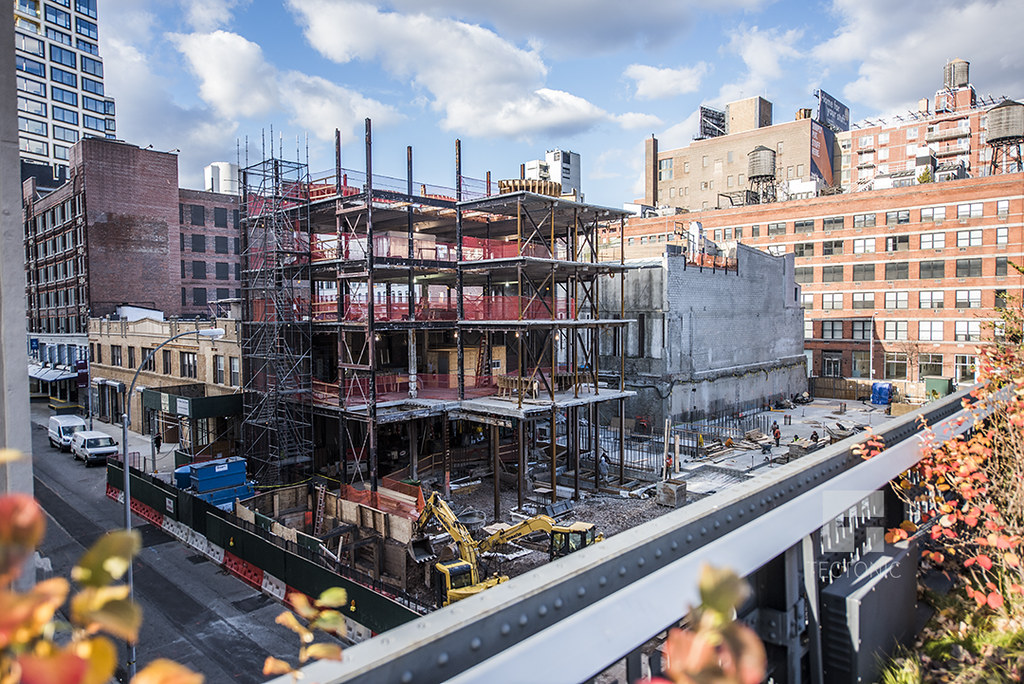 This will be a beautiful building.

Thanks and I agree.

I still can’t tell what’s going on here… is this a partial demo? with parts of the old structure being incorporated into the new building?

Yep, you’re correct. This was a partial demo as this project is considered as a conversion.

Why were these threads merged? have we confirmed that they are in face the same project? They are next door and have the same height however the renders are different and the devellopers are different aswell!
The plot thickens… someon would have to investigate some day if possible and see if there are in fact 2 different porjects.

Wasn’t this Jay Z’s hotel project back in the day before the crash in 08? I think that may be why it is the same height but different developer now and different design?