The first permits are up for the residential tower at Brookfield’s Manhattan West development, which will complement the site’s commercial giants. YIMBY revealed the building’s renderings back in January, and the architect of record is SLCE, while the design architect is SOM.

Filings for 401 West 31st Street indicate the skyscraper will stand 64 stories to its roof, which will rise 702 feet above street level. The building will have 790 units, with a total area of 756,674 square feet, including a retail component measuring 3,438 square feet.

Manhattan West — the residential tower’s base, via Brookfield

While construction across The Hudson Yards and neighboring developments will focus on enormous office buildings, residential growth in the neighborhood is equally important, as there is a dearth of supply. Given the obvious demand for new housing in the vicinity, 401 West 31st Street will likely become a major success story for Brookfield — though Manhattan West could use even more units than the number currently proposed.

Even at a relatively short 702 feet, 401 West 31st Street will become one of the tallest residential buildings in Manhattan, at least temporarily. The current development boom is pushing heights to levels the island has never seen before, and while most of the new towers are in the ultra-skinny and super-luxury class of buildings, Brookfield’s addition will compare to the giants of Far West 42nd Street, rather than the spindles of 57th Street and the Financial District.

Manhattan West, with old concept for the residential tower — image via SOM

Brookfield’s page on Manhattan West has several additional details on the tower — which has been dubbed 3 Manhattan West — and saw an apparent design change earlier this year, when a taller iteration was scuttled in favor of the current plan. The entire project is expected to be completed by 2020.

A new video has surfaced for Brookfield’s Manhattan West, which illustrates apparent changes to several portions of the site. Last week, conflicting stories emerged regarding Skadden’s potential move to the complex, and while it would appear a deal is not in the works, other companies may soon fill the void, allowing construction to begin on the office towers.

The residential building, which will likely be the first to rise, has seen the most notable alterations. Permits for the tower indicate it will stand 64 stories and 702 feet tall, with 790 units, and the structure’s new look is a sleek revision compared to the stumpier version previously depicted. SOM is designing, and like its taller office siblings, 401 West 31st Street will have a simple and glassy envelope, confined within the southern edge of the overall project. 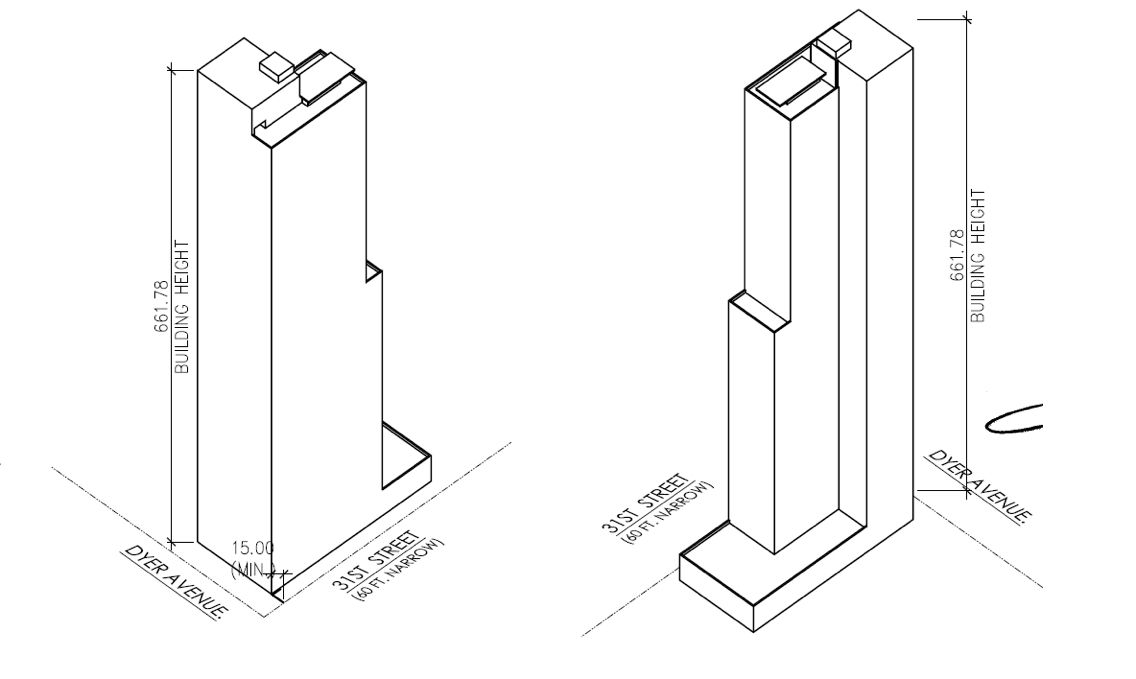 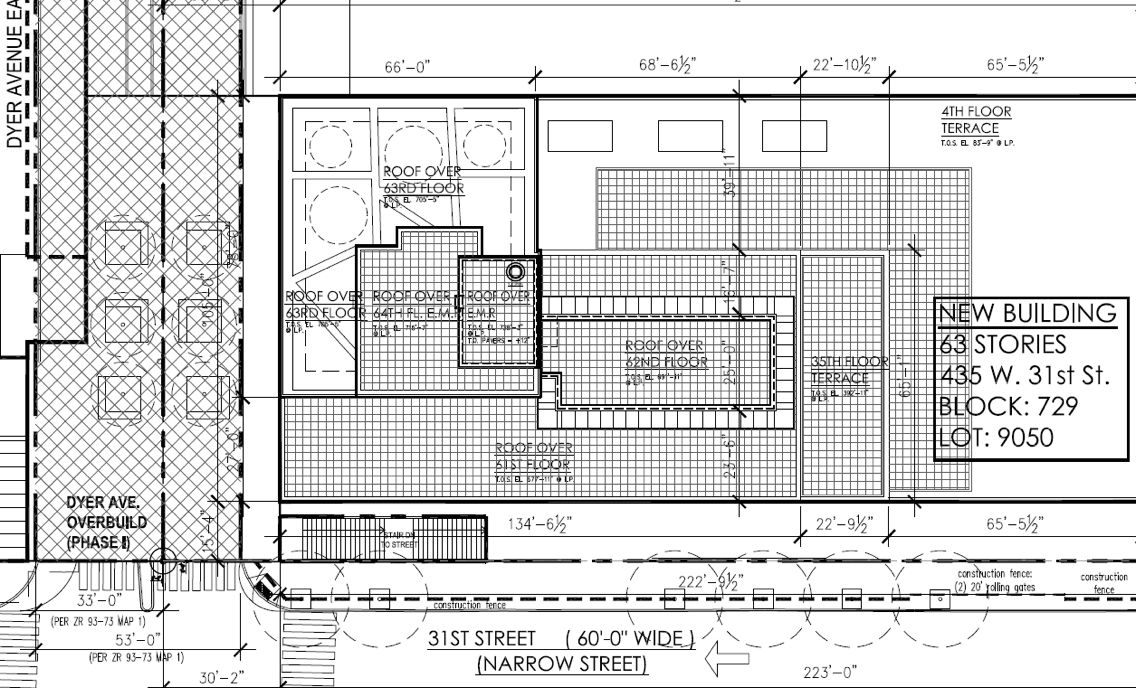 The pinnacle is still 702 feet above street level. The “Roof Over E.M.R.” has a 728’ 3" elevation, and the street is 26 feet above sea level. (The elevation figure was taken from your second DoB filing)

Ah okay. I was a little confused on that. Thanks 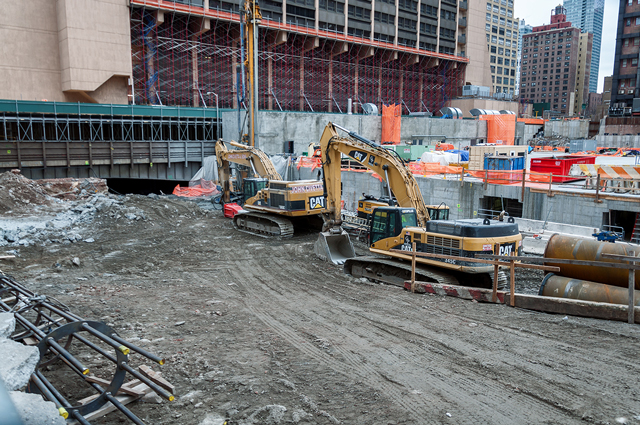 Until now, Brookfield’s Manhattan West development had largely seemed to be relegated to the shadows of Related’s Hudson Yards, and progress on the latter has already been significant. 10 Hudson Yards is well above ground, the decking for the railyards is falling into place, and work is also beginning or likely to start soon on the foundations for 15, 30, and 35 Hudson Yards.

But Manhattan West is impressive in its own right, and while it has taken years to get going, progress is finally at hand. Permits for the site’s first two towers, one residential and one commercial, were filed this year. And besides taking care of administrative overhead, the most important step prior to the towers’ rise has also been resolved, with the railyards below now fully decked over. 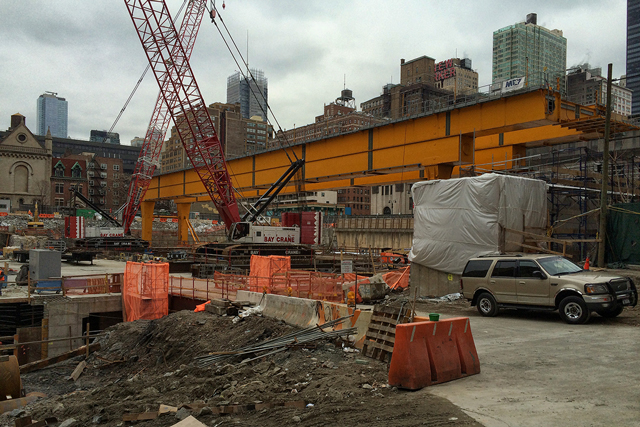 Now, excavation can finally begin for the actual towers of Manhattan West, which will be dislocated to the perimeter of the development, beyond the concrete platform above the train tracks.

The first of these to rise will be 401 West 31st Street, which saw permits filed this past May. With 790 units and a total floor area of almost 800,000 square feet, the 702-foot tall tower will be a massive improvement for the previously barren lot, adding substantially to the supply of new units coming to the West Side. The latest photos from a tipster show equipment throughout the site, and earth is already moving to make way for foundations. 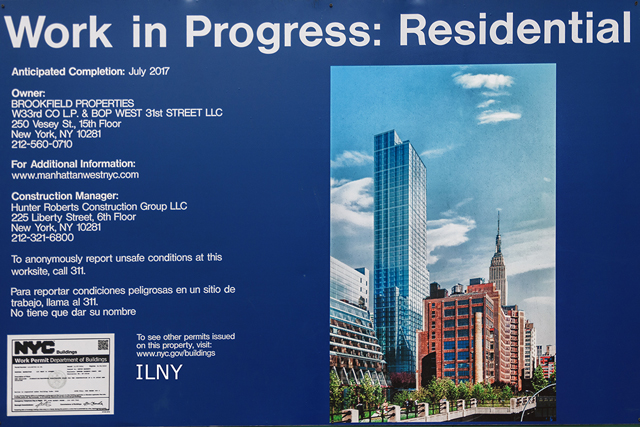 Signage for the residential tower went up recently, although the posted rendering does not include the neighboring office towers, which will form the bulk of the development. With news that Skadden Arps has signed a letter of intent for the 995-foot tower at 401 Ninth Avenue (aka 1 Manhattan West), and with excavation seemingly in full-swing, prospects for Manhattan West are looking much brighter for 2015 than they were even earlier this year.

Brookfield Property Partners announced that construction has begun on a 62-story residential tower at Manhattan West that will contain 844 units with 20 percent of the studio, one- and two-bedroom units priced at affordable rates.

Brookfield has closed on$479 million in HFA credit enhanced bonds through the Bank of China with a seven-year term to fund the construction.

Designed by SLCE, the Manhattan West residential tower is an $800 million structure that is slated to welcome its first residents in the first quarter of 2017 with substantial completion in 2018. Located at 435 West 31st Street between Ninth and Dyer Avenues, it will feature an array of amenities including a regulation-sized basketball court, a climbing wall, kitchens and dining rooms available for private entertaining, and a roof deck with grills. Hunter Roberts is the construction manager of the residential project. 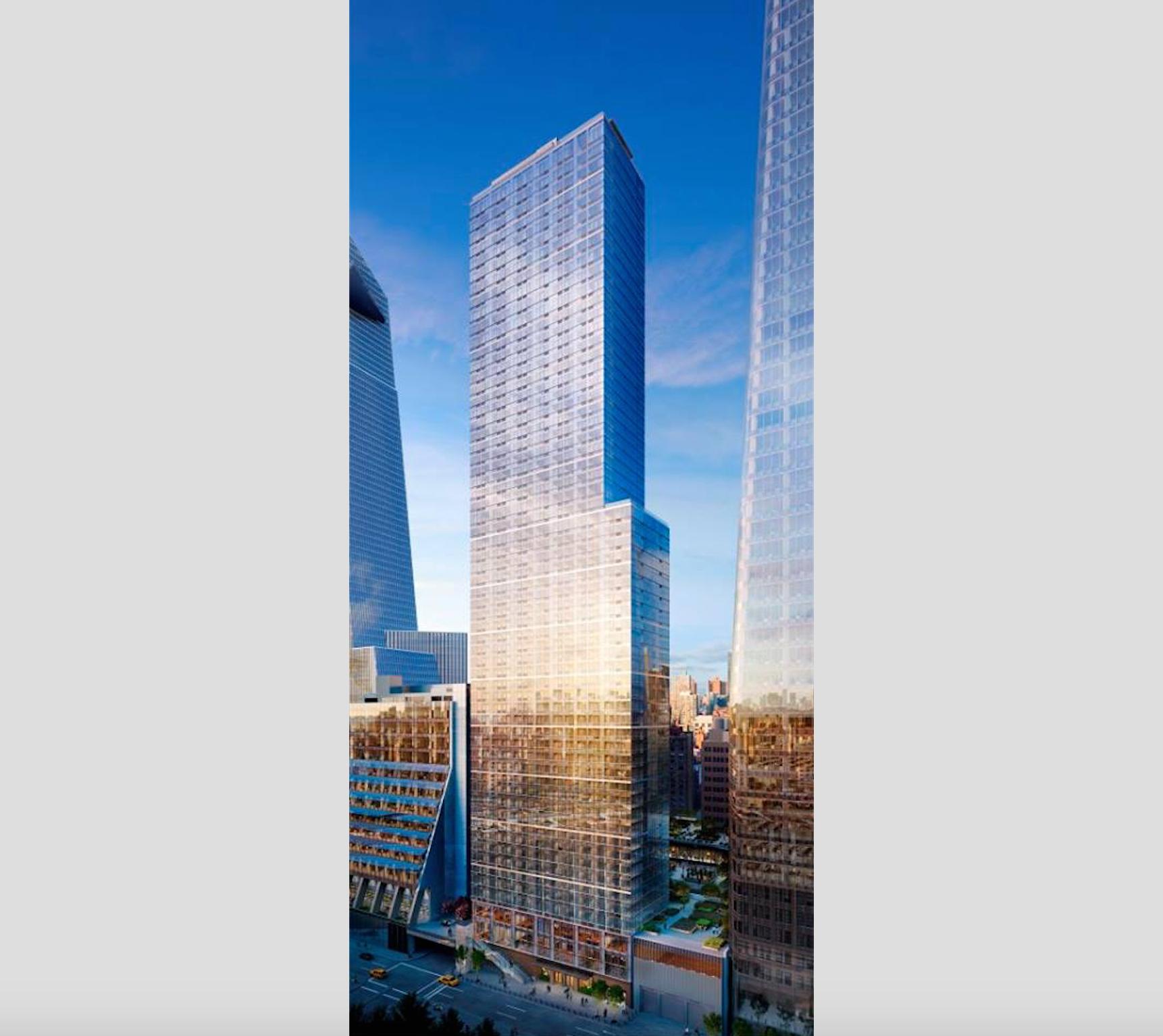 Wasn’t this only 3/4 floors beginning of September?

10 Hudson Yards won’t be alone for much longer! Can’t wait to see this area rising on my visit next month

Yeah it was pretty short (4-5 floors earlier last month). I’ll be honest, I forgot about this tower. There’s so much activity that even a 700 footer gets lost. I keep forgetting about 125 Greenwich Street too. I guess thats a good thing because there’s so much to cover.

Looking forward to see One Manhattan West to start its ascent!

This tower may and will look rather puny compared to its neighbours, but you can already see the density bulking up north and east in this shot: Looks like this will soon begin impacting the skyline in a decent way… although the design is meh.