yes, that’s probably true,
but you need to start with a couple of luxury rentals first before you can graduate to 432 Park avenue and the likes 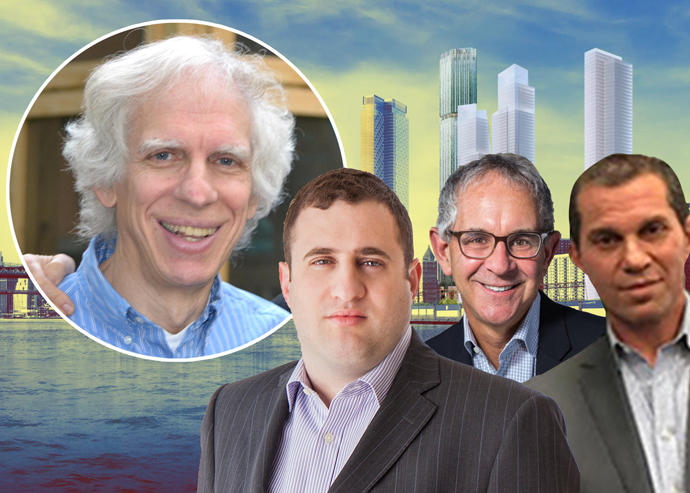 A judge has put another delay on the controversial Two Bridges large-scale development in the Lower East Side.

Annoying and absurd. Reminds me of 200 Amsterdam. No wonder this city is constantly in a housing emergency 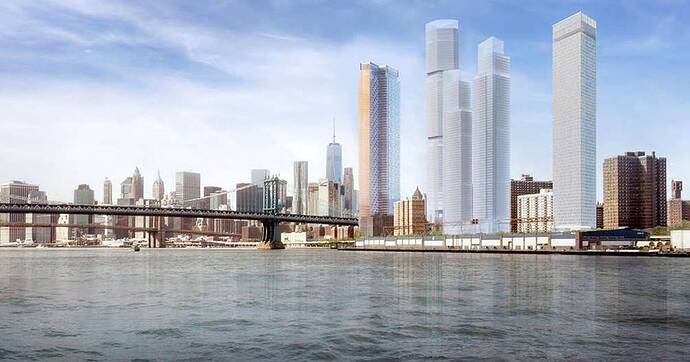 A state judge barred a developer from building four high-rise towers that had been set to offer hundreds of pricey apartments.

Initial rulings have been upheld. L+M Development and CIM Group will be appealing the decision.

What a garbage article. The neighborhood is full of immigrant walk-ups? Has the writer ever been to Two Bridges? A smattering of walk-ups are dominated by hulking commie blocks and the new towers would have included ~1,000 new units of aff housing.

This was accidentally posted in the 247 Cherry thread:

As usual the media has no idea what “Supertall” means.

And rightfully so. The US doesn’t use the metric system. Making comparisons between US and foreign cities isn’t fair. Who cares if a Chinese city has more “defined skyscrapers or supertalls” than New York. New York doesn’t give a flip about 984 feet versus 1000 versus 500 versus 250 feet. Developers just build what they want. I wish more than anything the CTBUH never defined these terms using meters!

With these towers at 260 South Street, 247 Cherry and 249 Clinton, Two Bridges will start to look a little bit like a mini-financial district. This could also put pressure on many of the owners of smaller buildings in the main segment of the financial district to get more serious about what is actually on their properties. This is especially the case coming out of a serious pandemic where older, smaller buildings have proven to be riskier than their larger counterparts. Key word here is larger. The need for these buildings goes beyond simply the effects they will have on their own properties. This could force action citywide, in more outdated areas of the city that need the upgrades.

Another slap in the face to the US was the CTBUH declaring the Sears-Willis tower shorter than the Patronus Towers in Kuala Lumpur. Nobody would look at those towers and say they are “taller,” since the Willis Tower had a higher floor height, higher floor count, and an antenna that is 300 feet taller! Further, the John Hancock Center in Chicago is 1500 feet to the antenna, but the Empire State Building is considered officially taller because its roof height is taller, despite its antenna reaching 1454.

It’s all useless. I think absolute pinnacle height is the only relevant standard.

If you count by absolute height, then in the first pic the Sears Tower is taller, and in the second pic the John Hancock Center is taller

I agree with your general point, but the media’s frequent tendency to label towers under 300 meters as “supertalls” is misleading and only gins up more needless NIMBYism–it’s easier to get people riled up against a scary-sounding “supertall” than a mere skyscraper or high-rise.

And that hurts the very real concerns of other neighborhoods which need to take things a whole lot slower. 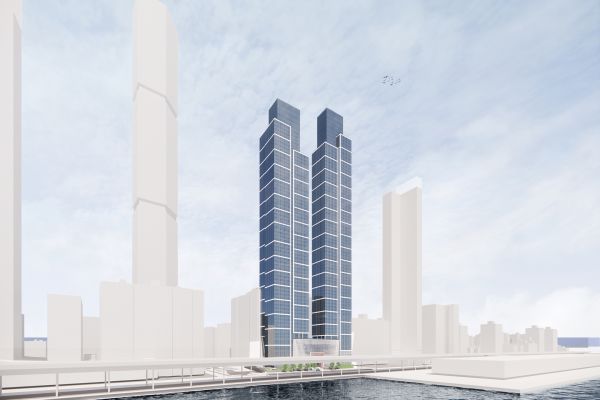 The Chetrit Group sealed $70 million of acquisition financing for a planned mixed-use multifamily project in Manhattan’s Lower East Side. 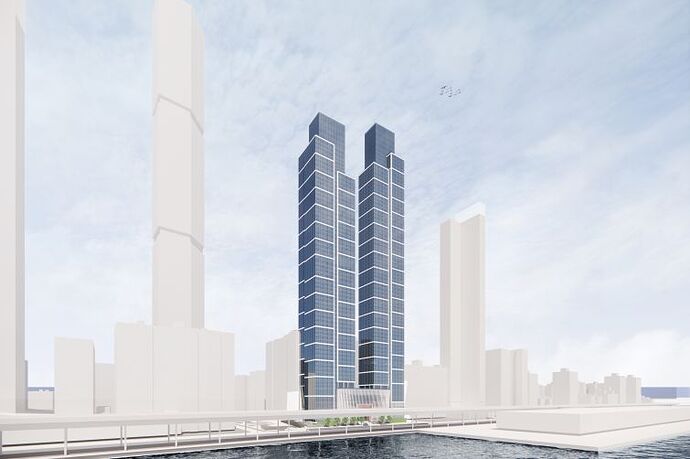 Beautiful. The photo posted above makes the project look a bit smaller, but the renderings below show the sheer scope of this upcoming project. This has to be my favorite upcoming project. That area will soon be a new skyline on the East River. They need to hurry this development up! Can’t wait.

Modernist, minimalist and beautiful. In the near future there will be multiple tall glass clad towers clustered together near the shore line; it will look a bit like an east river version of Hudson Yards.

This should really be the trend; There are plenty of mid-century housing projects which need improvements and enhancements, so there are ways to improve;

In Manhattan, you could just do total, blowout upgrades with new, glass high-rises that can house much more people, enhanced common areas with much better services and amenities, and built-in connections to the subway and various mass transit opportunities.

In the outer boroughs, one may do lower-rise extensions that activate the urban edge, providing a needed boost in density and housing capacity to many of those tower-in-the-park developments, and still enhancing the common areas with modern services and amenities. 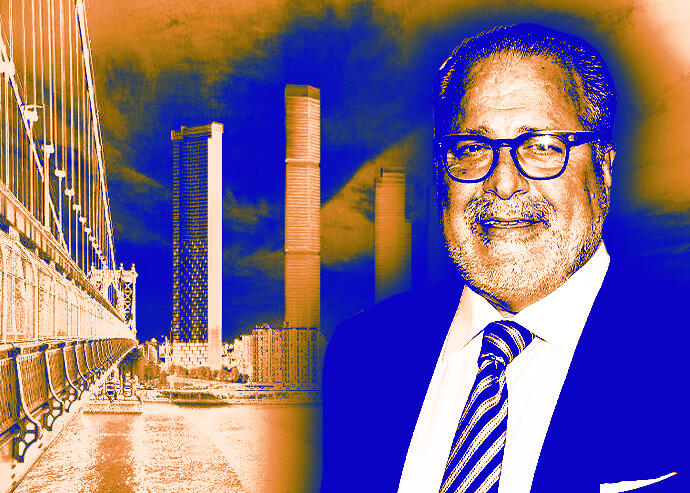 All the papers are coming out with articles now about this… 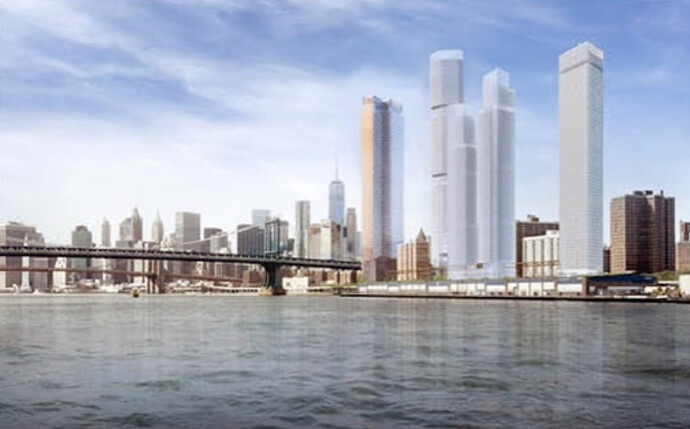 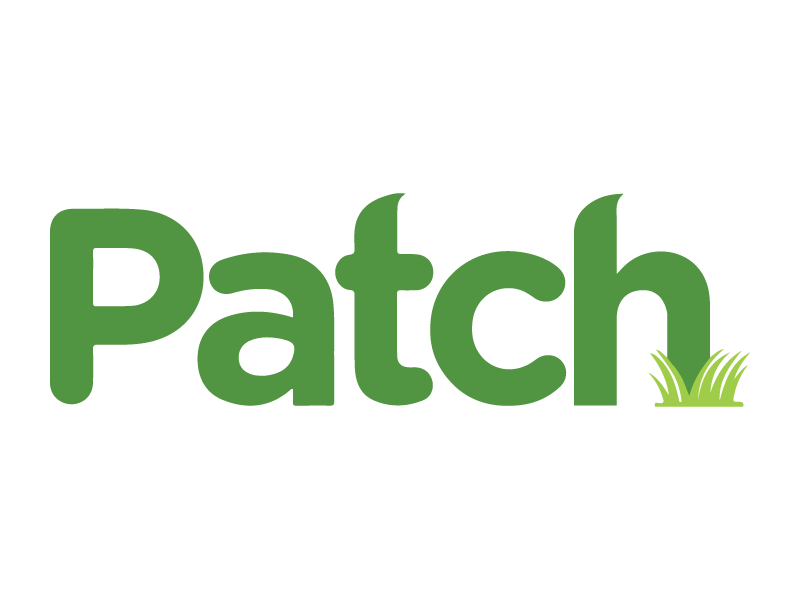 The quickest way to get caught up on the most important things happening today in Lower East Side-Chinatown.

Madison Realty Capital originated the financing for the mixed-use waterfront towers, which will feature retail space and affordable multifamily space. 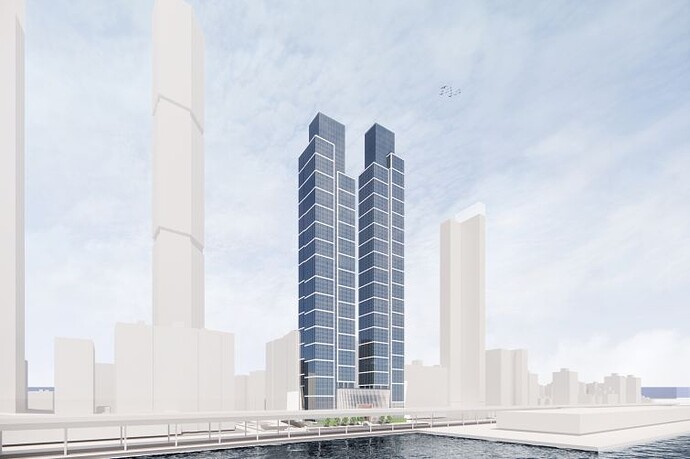 The controversial 70-story tower slated for the Lower East Side waterfront received a major boost this week. Department of Buildings yesterday issued

The controversial 70-story tower slated for the Lower East Side waterfront received a major boost this week.

Department of Buildings yesterday issued permits for the gargantuan foundation at 265 South Street, thus allowing owner-developer Chetrit Group to take advantage of the 421a tax exemption which is set to expire June 15.

The applications for the Support of Excavation and the Foundation were together approved by the city agency last week. We’re told that plan examiners determined all required items associated with the applications had been properly submitted, and that plans for the rear parking lot of Lands End II complied with applicable code and zoning regulations.