Another deal in Harlem as HAP buys lot on 121st Street

Corridor from 110th to 125th Street seeing a lot of building

UPDATED, 2:55 p.m., June 16: In yet another residential transaction in Harlem for HAP Investment Management, the firm bought a vacant corner lot on Third Avenue and 121st Street for $13 million.

The lot last sold in 2010 for approximately $9 million when it emerged from foreclosure. Sparks was also the broker on that transaction.

The site includes 100 linear feet of Third Avenue retail and is zoned for 91,600 square feet of buildable residential space.

It’s unclear what the building will look like, but it will definitely be a residential development, Sparks told The Real Deal.

Prior plans, which weren’t approved by the city and did not materialize, included a potential 10-story residential building on the site.

“There’s a trend of buildings going up on this corridor from 110th to 125th Street,” Sparks said. At least two other residential developments are being built on that same stretch.

Sparks has worked on multiple transactions in Harlem, and told TRD that he has more in the pipeline. Earlier this week, Sparks closed a deal on a package of unsold condos on Manhattan Avenue and 117th Street. A closing on a smaller deal on Third Avenue is expected to take place soon. In addition, Stark has three or four more deals in contract.

“The market is hot,” said Sparks. “It’s becoming a preferred neighborhood for young professionals to move.”

The buyers’ attorney was Adrian Zuckerman of Seyfarth Shaw. The sellers’ attorneys were Brian Beller of Phillips Nizer and Neda Barzideh-Levy of Tahl Propp.

Two months ago, Tahl Propp Equities told YIMBY they sold a development site at 2211 Third Avenue, on the corner of 121st Street. And now, the new owner – HAP Investment Developers, whose website says they bought the site for $13 million – has filed plans to erect a new building.

HAP, whose projects are concentrated uptown, plans to erect a 124,124-square-foot apartment building, according to the permit filed this morning.

Beyond that, the details are somewhat in dispute. The permit application cites a residential component measuring 83,022 square feet with 12,096 square feet of retail space, plus 93 apartments. The building would rise 10 stories, to 111 feet, and include 77 parking spaces, per the permit, and would not feature an inclusionary housing component.

HAP’s website, on the other hand, says they’ll be building 78,000 square feet of residential space (divided among 105 rental apartments) and 26,000 square feet of commercial, plus a small 1,000-square-foot community facility. They say the garage will be only 5,000 square feet, which doesn’t seem large enough for 77 cars.

The architect of record is Karl Fischer, with HAP’s website saying that it’ll be “designed by an award-winning New York City architect.” The schematic drawings featured above were found on the developer’s website.

Nobody from HAP’s office was immediately available to comment on the project. A permit for structural work was also filed, though, so construction may not be too far off.

Here is an update from 2 days ago. 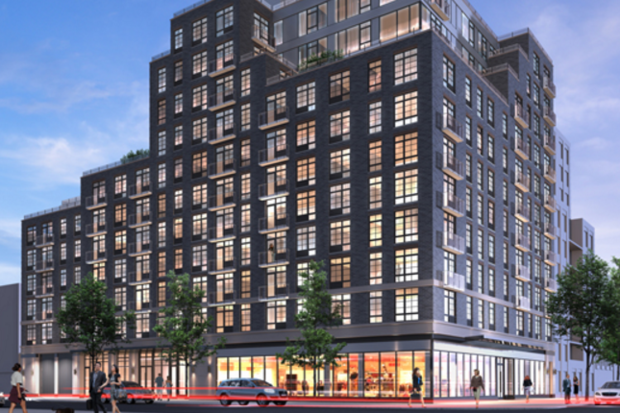 The supermarket plans to open within the next year after a rash of local grocery store closures. HAP TEN Tops Off, Will Bring 108 Market-Rate and Affordable Rentals to East...

HAP TEN Tops Off, To Bring 108 Market-Rate and Affordable Rentals to East Harlem

diagonally across the avenue

YIMBY has the latest permits filed for a ten-story mixed-use building at 2226 Third Avenue in East Harlem, Manhattan.