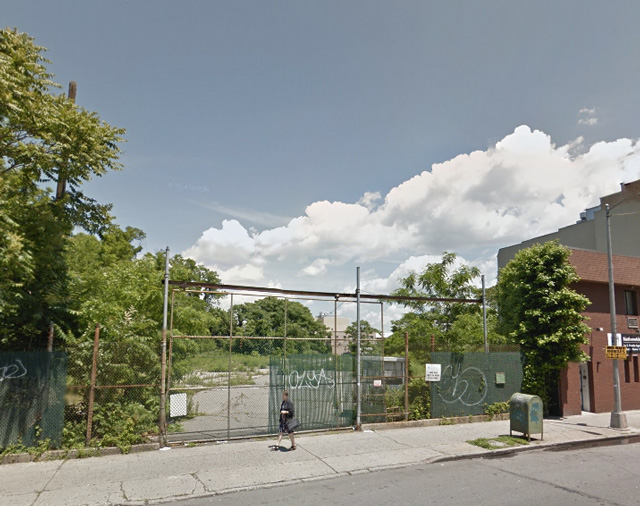 When we found out in July that Muss Development and AvalonBay were planning to build a mixed condo/rental building of around a quarter of a million square feet in Sheepshead Bay, we knew something big was coming to the neighborhood. But how big, we weren’t quite sure.

Now, we know: architect Perkins Eastman has filed for a new building permit at 1501 Voorhies Avenue, and the tower will reach a whopping 333 feet into the sky, hitting 30 stories at its peak. The project – situated on an oddly shaped parcel adjacent to the Brighton Line elevated structure, overlooking the Sheepshead Bay express stop – will be 280,000 square feet in total, mostly residential but with a 15,000-square foot commercial space.

The project will be a game changer for development in southern Brooklyn, and will be the tallest building — by far — to go up in the area since the post-war years. While the immigrant neighborhood is well outside of AvalonBay’s traditional in-city orbit, it’s solidly within Muss’s wheelhouse – the Forest Hills-based builder is most at home beyond the gentrifying fringe, in areas like eastern Queens and southern Brooklyn.

Muss already proved the market for luxury condos marketed towards immigrants from the former Soviet Union in Brighton Beach with their Oceana complex. While condos elsewhere in Sheepshead Bay and Brighton Beach tend to sell in the $400s per square foot, units in Muss’s Oceana towers have been fetching $600 a foot or more since the market rebound. We expect similar pricing for the condos at 1501 Voorhies, which will make up for the lack of Oceana’s beachfront setting with height that rivals anything else south of downtown Brooklyn.

While the pricing will likely be high for the neighborhood, it’s a far cry from what you’d pay in a comparable building in downtown Brooklyn or Williamsburg. It’s also the sort of development that New York City desperately needs more of if it ever hopes to become an affordable city, with residences targeted towards immigrant buyers who have done well for themselves, but are not so wealthy that they can afford to plunk down $1 million on a one-bedroom apartment.

The architecture should also be a big step up from the normal Sheepshead Bay and Brighton Beach fare. Perkins Eastman will likely be designing a much more modern structure than the pastel and stucco buildings normally developed for Russians in the U.S., whether in Brighton Beach or Sunny Isles.

Per the permit, the building will contain 250 apartments, for an average unit size of just over 1,000 square feet. There will also be 124 garage parking spaces plus 52 in a surface lot. With just a single space more than required by zoning, we suspect that the developer would have preferred to make the more financially and ecologically sound decision to provide less parking, were it not for the Department of City Planning’s outdated minimum parking requirements.

I would have very low expectations here. AvalonBay and Perkins Eastman were the team behind Avalon Fort Greene, and Avalon consistently puts up low-cost garbage. Expect a bland brick or EIFS facade, exposed floor plates, and PTAC units throughout.

I realize that’s a rather negative bit of input but I really don’t see how anything attractive could be built here, which will be compounded by how intensely this building will stand out amongst its mostly lowrise neighbors.

The end product will probably be fairly average, but that is to be expected given the area. Still, the additional density will be beneficial, and if it can come in at an affordable market-rate price point, then that is even better!

I suggest you come to Sheepshead Bay before providing input. More density is all well and fine when done right. It’s a known fact that high-rise buildings do not make an area better but worse off - see here. Please tell us how an area that is a haven for low rise buildings and single family/two family homes is going to fair with a monstrosity in our midst? DOB, DCP and DOT have a major problem on their hands and thinking like it’ll all go perfect is ridiculous. I agree with Gulcrapek up at the top that whatever is put up will be shoddy and bland. Seriously, come to the neighborhood and tell me if you believe otherwise. Developers and architects should be trying to inspire, not just turn a quick buck. Playing into that notion isn’t helping anyone but just prolonging a problem. Something is wrong when a one bedroom apartment that costs $700,000 is deemed ‘affordable’ in your eyes.

The author clearly is not an urbanist and does not understand the idea of a high rise and its integral part within cities. This is merely NIMBY propaganda. Going down the list, anybody who truly understands how high rises are designed, the connection towards the community, green design, and the socioeconomic factors would find this list false within the highest degree.

Actually Chris I actually hold a Master of Urban Planning. It is not NIMBY propaganda. I am a member of the community speaking the truth. If anyone is spouting propaganda it is you. I provided a link from urbanists stating the negative effects of high rises on a community. You however just said what you think with no factual data to back it up. It’s easy to give an opinion (as you did)… Please try again though

While YIMBY for now doesn’t have a section for debate, the purpose of this thread is to discuss 501 Voorhies Avenue, I invite you to debate this topic and defend your points over here: http://forum.skyscraperpage.com/showthread.php?t=213457

I have properly cited your work, and invite you to again to the debate. This is under the city discussion section. I’m not sure if your have an account, but I would welcome you to make one, and again, discuss this topic in depth.

I and the community will be sure to dismantle your argument with facts.

This fits in nicely in that part of town.

This fits in nicely in that part of town.

Both Chris and Eveningstar I have an open invite to you both to come to Sheepshead Bay and explain to me how a 30 story tower will “fit nicely.” And to Chris I see your post on your link and people are already agreeing with the link, so you see it’s all about context in the city it’s in. A 30 story tower in the heart of Sheepshead Bay doesn’t make any sense at all.

The building is surely unprecedented. Then again, this is New York we’re talking about.

I think that people forget that they live in such a city. In order for a city to grow, there must be development. There is a demand, and when supply is low, supply must increase. A city can’t remain stagnant at the same population forever. It is in its favor to expand. The 1000’s of units that we are seeing proposed on a monthly bases, and increasing, is a sign of a prosperous city which is drawing residents from both the domestic, and international level. All of these extra minds bring culture, ideas, business, etc…

It is with that said that the idea of NIMBYism simply falls apart. To deny people the opportunity to live in this great city because of sunlight, height, or simply because he or she wants the neighborhood to remain the same as it was when they first arrived? It’s asinine to think that way. Cities are not museums. They are living social and economic units which must grow. A skyline is not constant. It will evolve. Even in the bowels of Midtown, we have those who oppose supertalls. Tower Verre was a victim to this. A travesty given such a design that it received a height reduction.

This anti-high rise chatter doesn’t work in NYC. Maybe this works in Ballsack, Kentucky, but surely not NYC.

I think you are forgetting what the word YIMBY means. This is not the site to post that anti-highrise rubbish. Especially when it comes to something minescule, such as a 30 story tower. I am all for debating the merits of a tower thats lets say over 2000 feet, as it is a game changer, and design would be extremely important, but to sit there and debate why the neighborhood should not get a 30 floor tower is useless. Hate to burst the bubble but this tower will happen, and in fact, towers of greater height will litter the landscape. Its this same mindset that plagued downtown Brooklyn, and look, towers of ever increasing height are going up. The neighborhood as a result is better because of it. Its dynamic, full of new minds, and aesthetically pleasing.

Awesome move by Muss to expand in the area past Brighton Beach and the Oceana. Will do wonders for the area.

The big new developments in this area Brighton, Sheepshead Bay and Bath Beach are a direct result of the wonderful Coney Island turnaround that is ongoing. A century ago the exact same thing happened, and as expected, history is repeating itself.

Also if you guys can do a piece and get us more info on the Coney Island Seaside Amphitheater coming in May 2016 it would be much appreciated. Thanks

Agree! And this is a good thing! If housing prices are to remain steady, supply needs to increase; the problem with NYC is that demand spikes in neighborhoods very rapidly, while supply tends to remain fairly steady due to the amount of red tape.

Consider the amount of gentrification in Williamsburg et al since 2000. And then look at the new construction. Yes, there are new buildings here and there, but red tape prevents building to meet actual demand, which is why prices spiral and the cycle moves on to more neighborhoods. 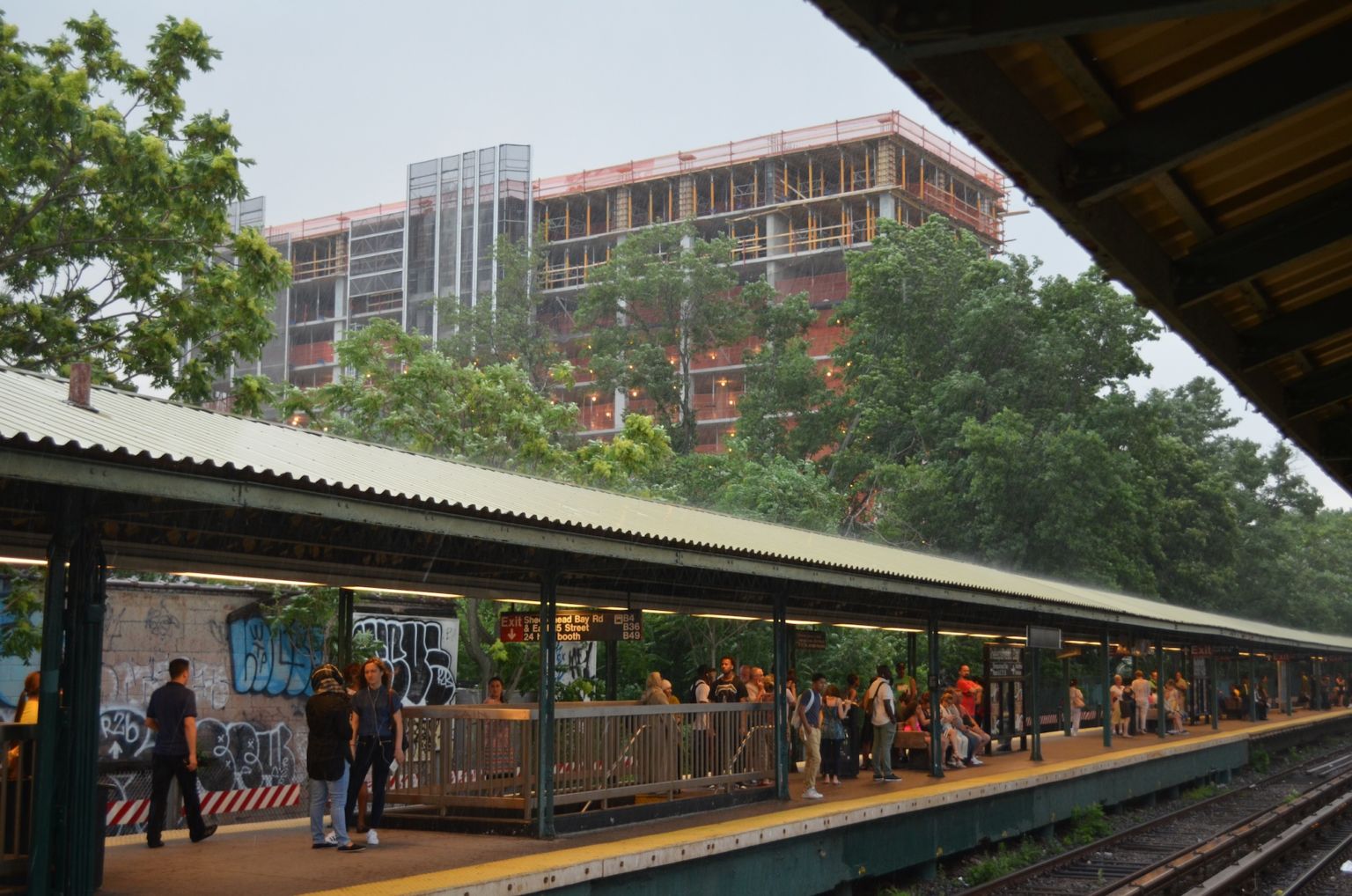 YIMBY has the latest news of the 28-story, 236-unit residential building under construction at 1501 Voorhies Avenue, in Sheepshead Bay.

Just changed it to u/c

I was in the area today. This tower has to be over 300 ft tall now. It dominates the area. Spotted it crossing the Verrazano and closer as I was approaching Avenue U in South Brooklyn. Unfortunately no pics as driving + 65 mph isn’t good for shots and dangerous. Still u/c. Can’t wait for 532 Neptune Ave over by Coney Island. I like these developments far away from the main skyscraper nodes. We need more of them!