Are they adding a subway entrance to the Jay Street-MetroTech Station? On the SE corner of Willoughby St and Bridge St is a large hole in the ground, missing columns, and a cut out of the sidewalk. There are two existing small subway staircases, one directly across Willoughby St and the other directly across Bridge St. Perhaps this is meant to provide a modern, ADA-compliant entrance? The first photo is the best I could get of this hole in the building:

This will be massive!

Construction on the Avalon Willoughby Square is kicking into high gear, and the residential tower — which will soon become the tallest building in all of Brooklyn — is now several floors above street level. As of last September, demolition of the site’s former structures was just wrapping up, and the block’s transformation is already impressive.

The building’s official address is 100 Willoughby Street, and the project is located directly across from Brooklyn’s current tallest, 388 Bridge. The pair will temporarily define the borough’s skyline, but will soon be joined by even taller towers at 340 Flatbush Avenue Ext. and likely CityPoint, as well.

SLCE is the architect of record, and no new renderings of the design have been released; the on-site glimpse into the future of 100 Willoughby Street is relatively plain and especially glassy, but the overwhelming density is the project’s most impressive feature, and permits indicate the 57-story and 595-foot development will deliver 823 units.

On-site signage indicates completion of the project is expected in 2015, and if the current pace of construction continues, the tower should pierce the Brooklyn skyline in no time.

SOME OF THESES LOCATIONS ARE IN brooklyn, namely willoughby and Atlantic ave.

Construction on the Avalon Willoughby Square is kicking into high gear, and the residential tower — which will soon become the tallest building in all of Brooklyn — is now several floors above street level. As of last September, demolition of the site’s former structures was just wrapping up, and the block’s transformation is already impressive. This is BROOKLYN!!! Not NYC Manhattan

Thats the best part. That its not in Manhattan. DoBro will continue to become denser, and the next hotspot will be LIC. 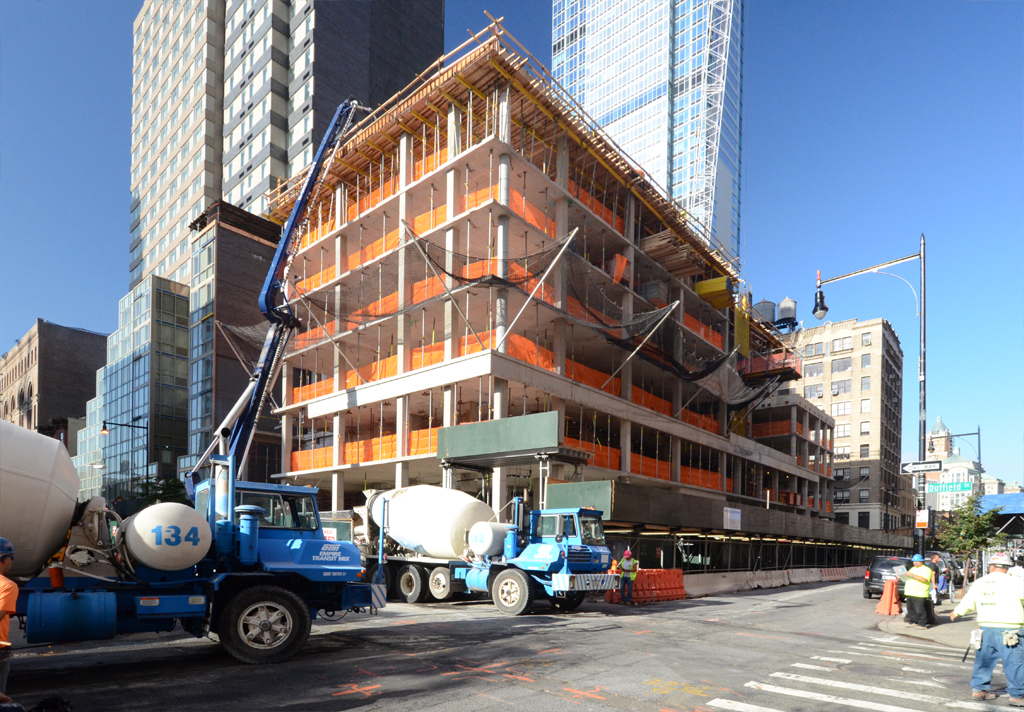 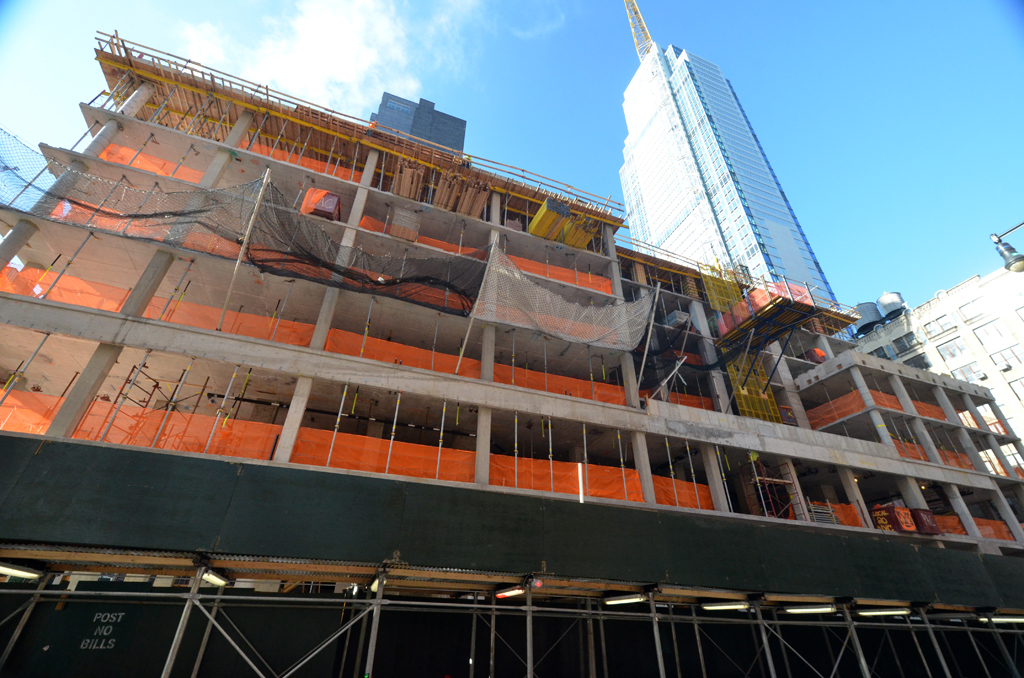 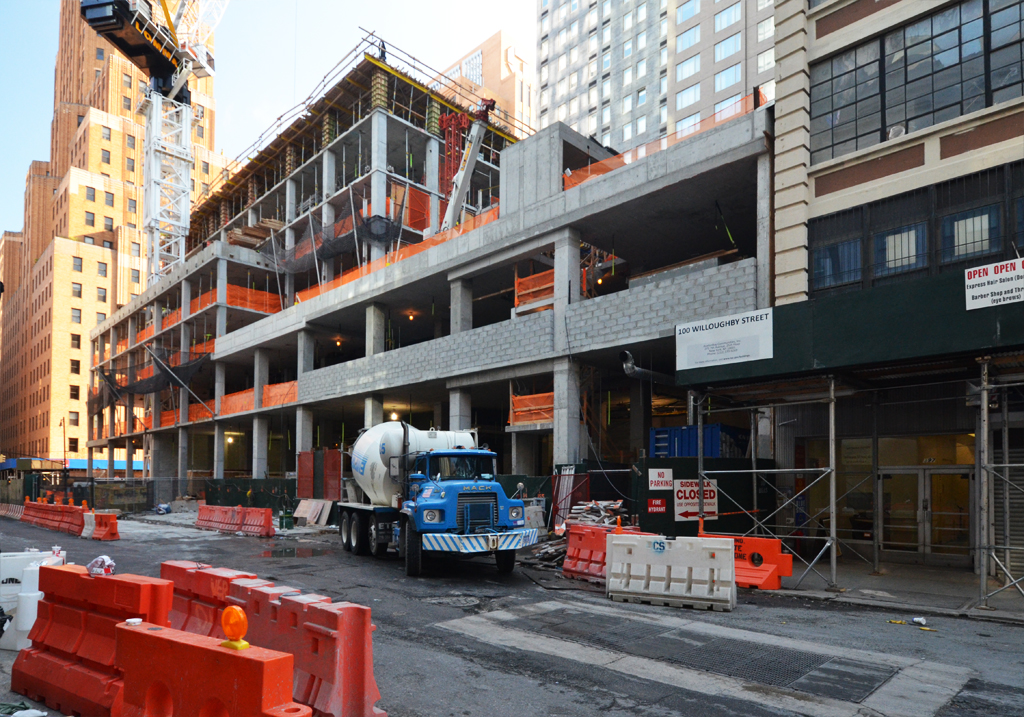 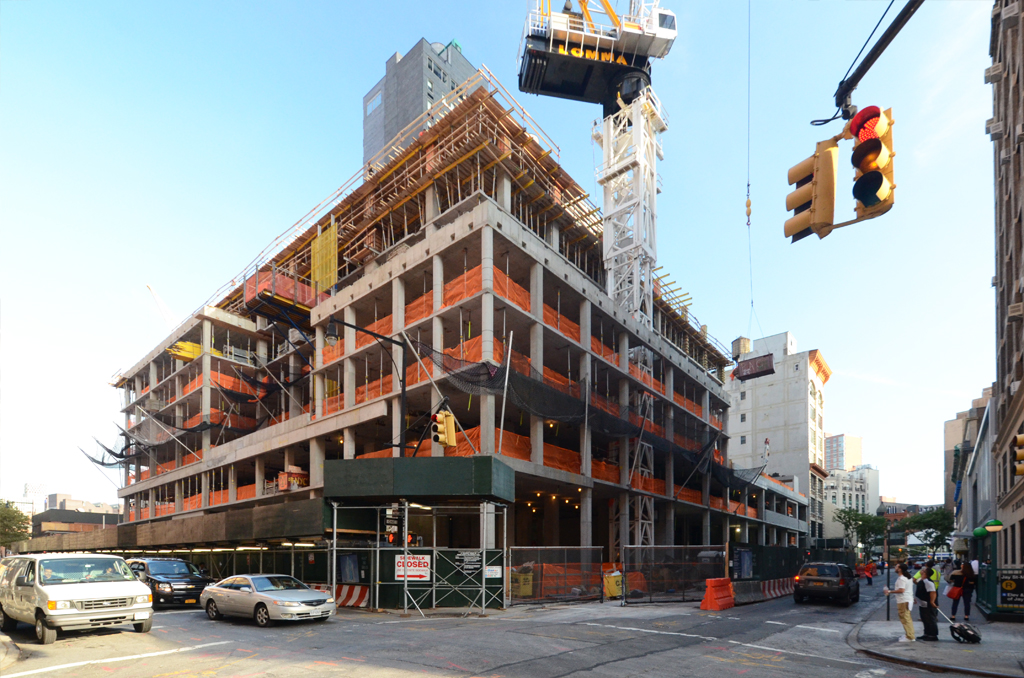 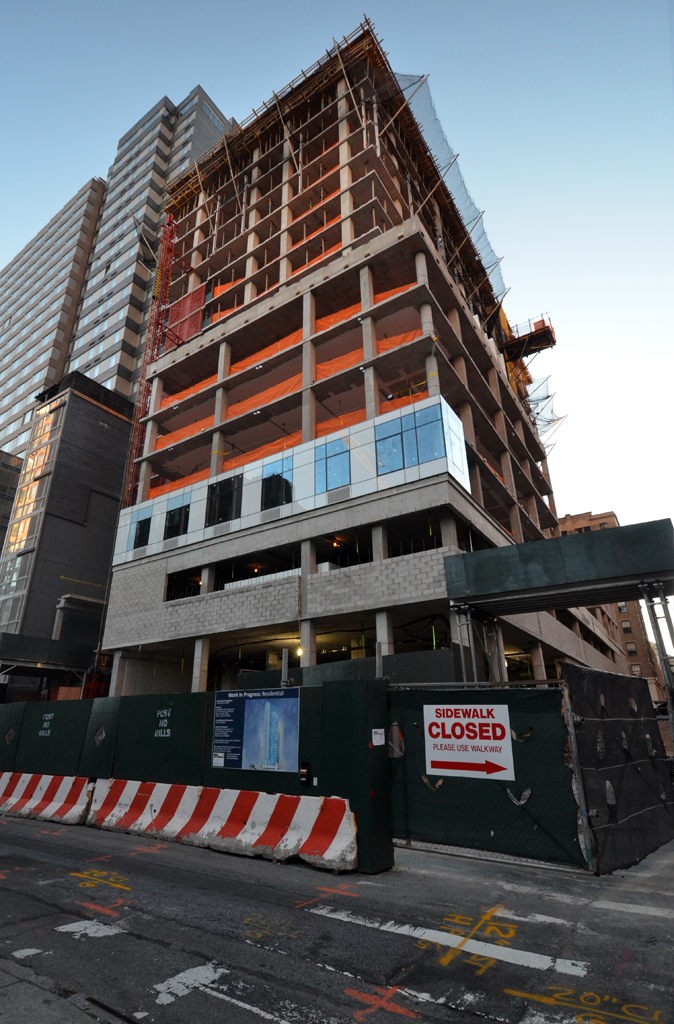 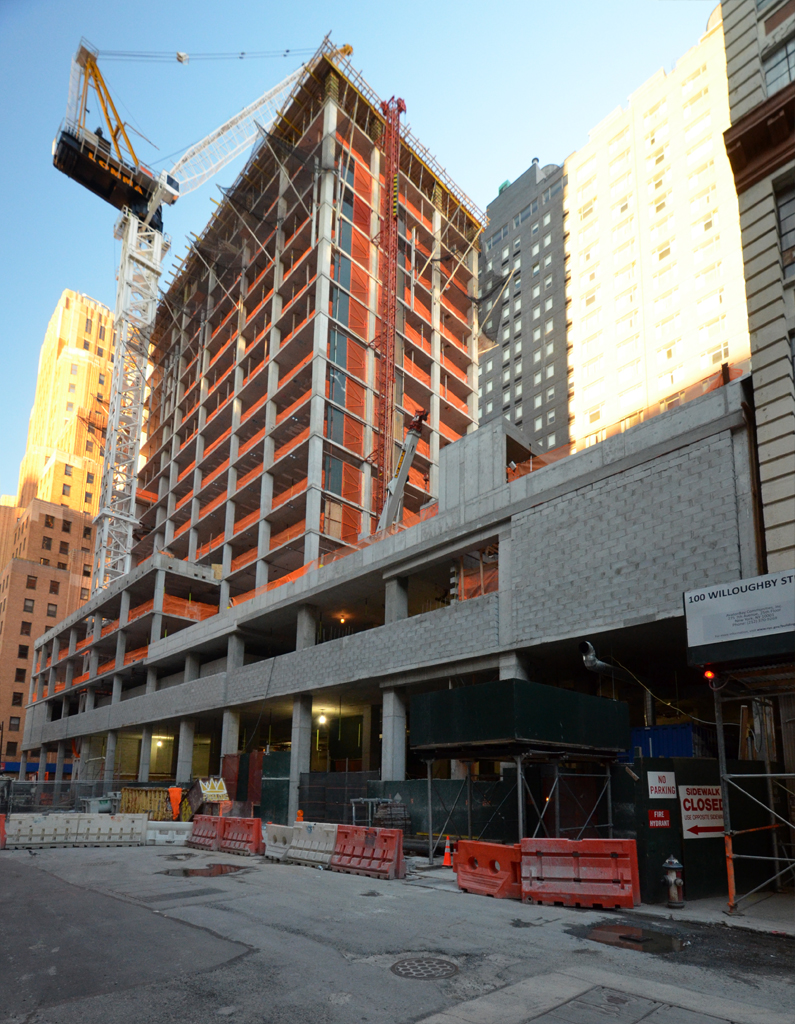 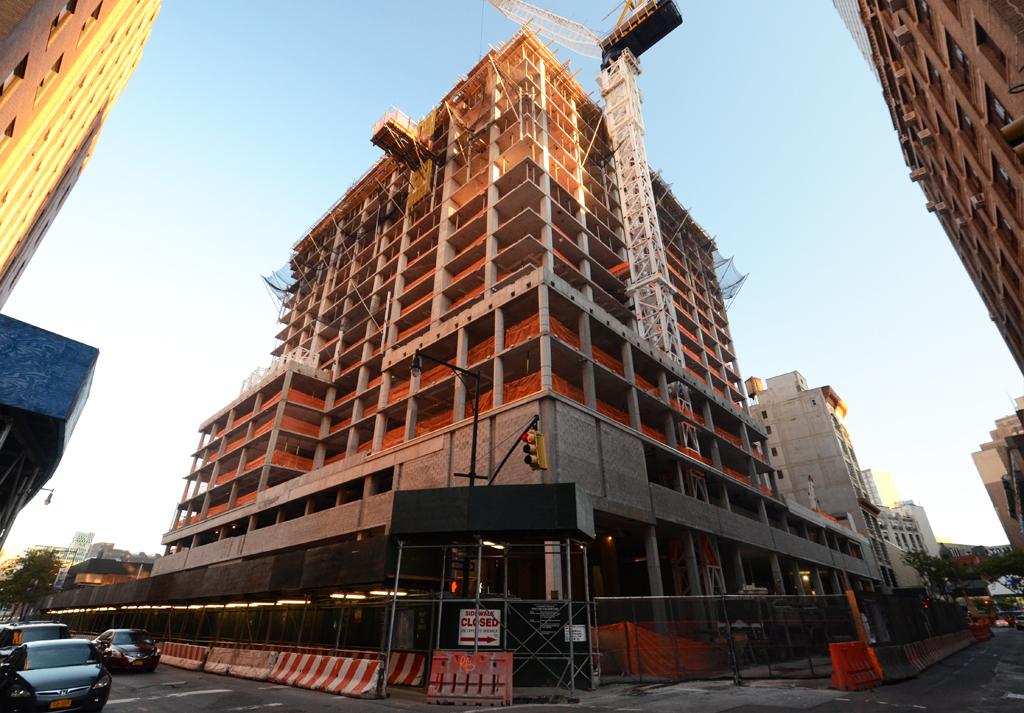 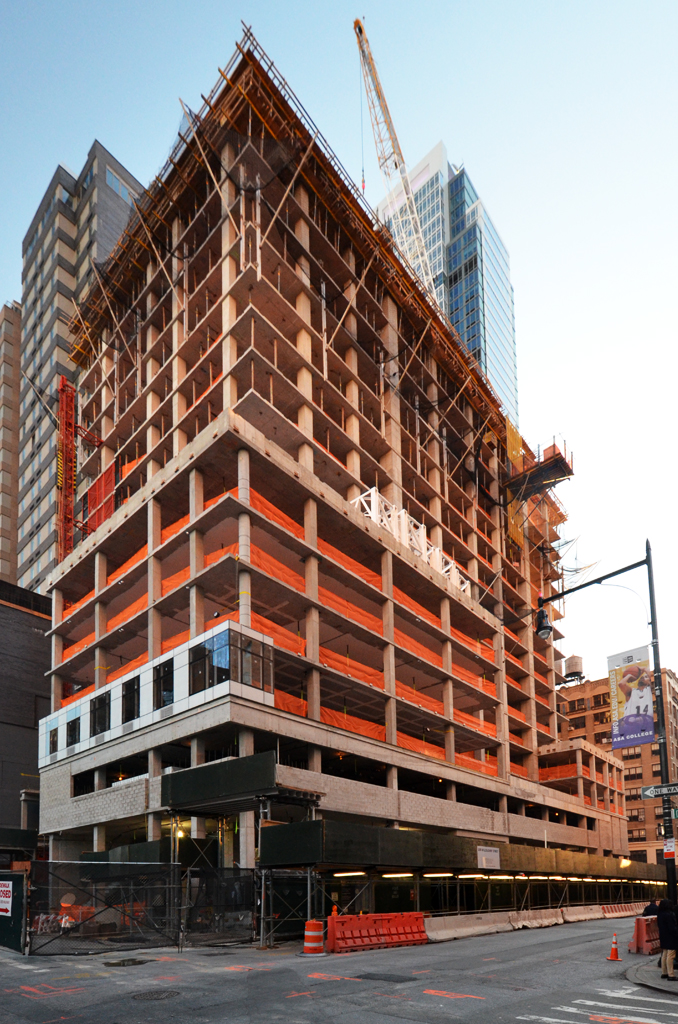 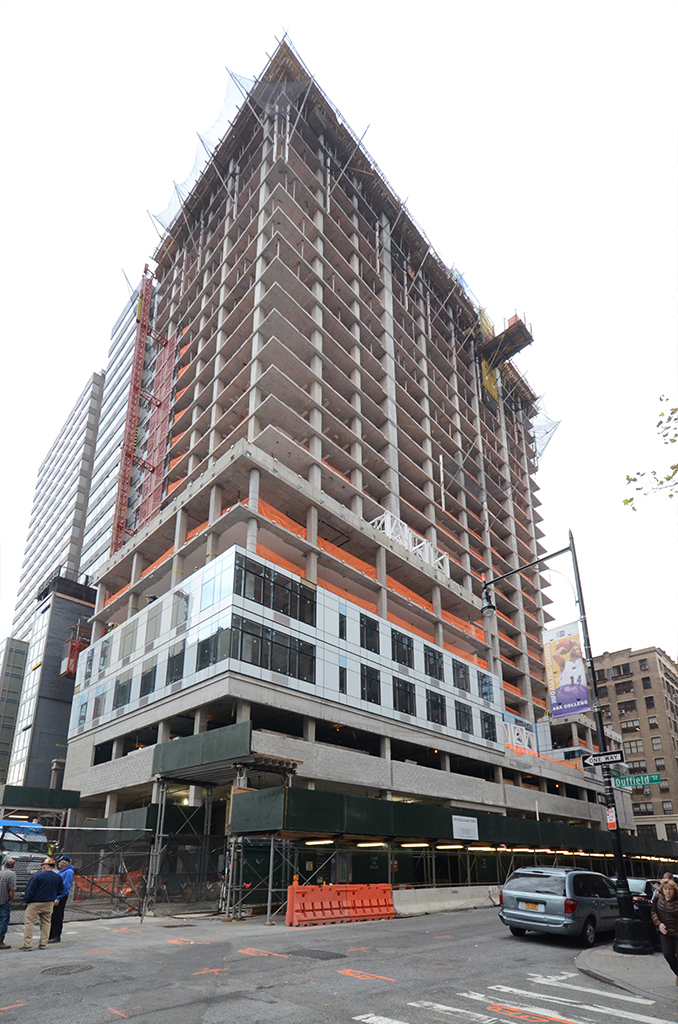 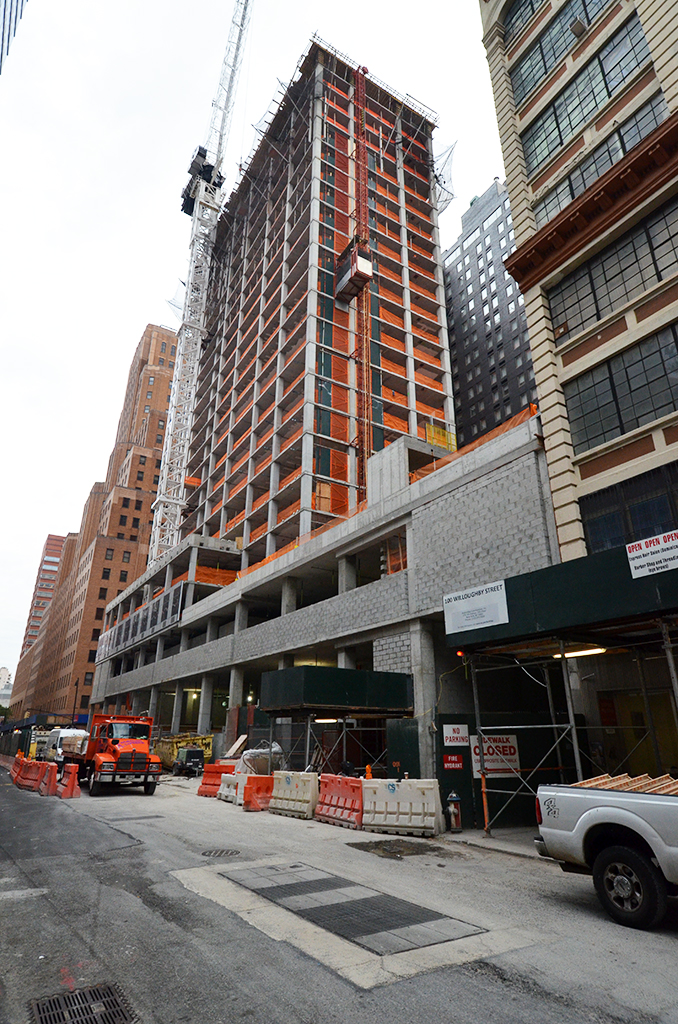 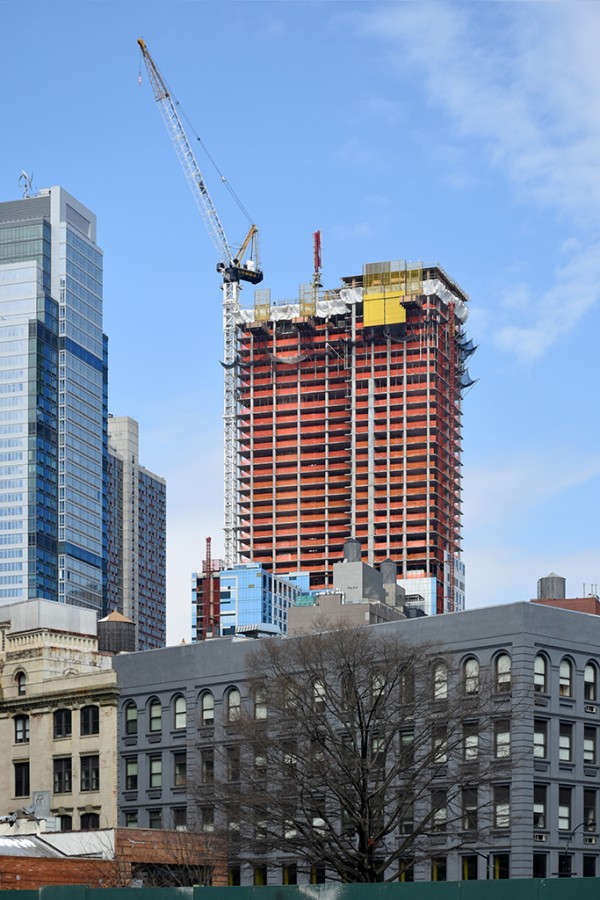 Last we checked on AvalonBay’s Avalon Willoughby Square, at 100 Willoughby Street, the downtown Brooklyn tower had reached around 15 stories, and the first façade panels had just begun to be applied. The photos come from YIMBY reader Tectonic.

Fast forward five months, and the apartment building has made tremendous progress, and appears to be either topped out or nearly so, with cladding reaching past the halfway mark. The dominant color of the façade is white on the Duffield Street face (with brighter shades of blue on the Willoughby Street side), punctuated by blue windows and marred by unsightly PTAC units below them – an unfortunate scourge that national developer AvalonBay has bought into, which also afflicts their Avalon Fort Greene tower. 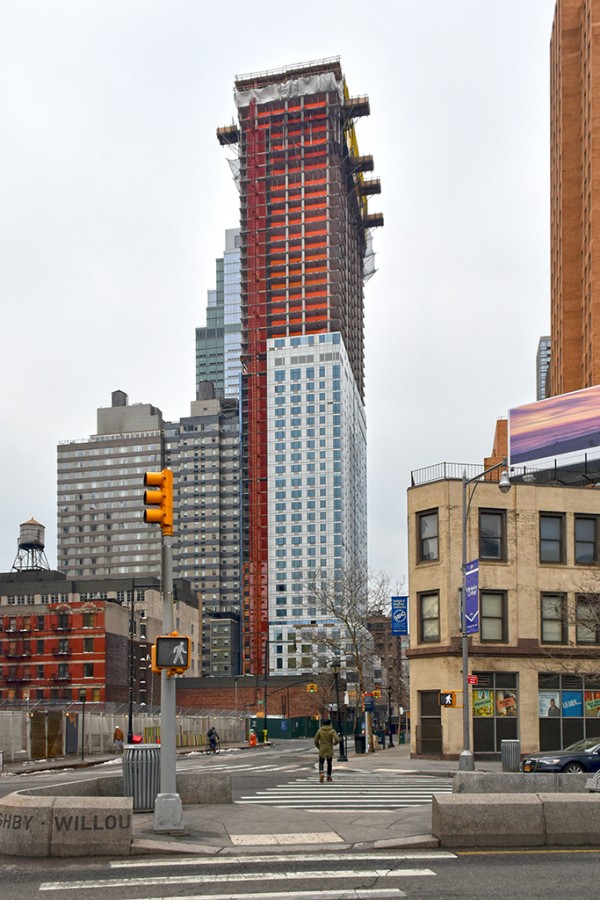 The tower’s ultimate height will be 595 feet and 57 stories, which will make it the tallest in Brooklyn. At least, for now – the 674-foot-tall 420 Albee Square and JDS’s 340 Flatbush Extension (currently home to Junior’s) should eventually surpass it.

SLCE is the architect, and occupancy is expected in about a year, per the developer.

Pic taken by me

Still appears like it is not complete. The eastern side is still partially open.

This building is now closed up. Facade is completed.