Courtesy of the DLANC Planning and Land Use Committee, I offer you updated renderings of Carmel Partners’ proposed tower at 801 Olive Street. Set to rise 27-stories, the GMP Architects designed tower would contain 363 residential units above a four-story podium. The building activates the corner of 8th and Olive Streets with 10,000 combined square feet of retail and restaurant space.

Nine months after revealing plans for a new residential tower in South Park, Carmel Partners is switching up the playbook. According to a memo issued earlier this month by the Department of City Planning, the San Francisco-based developer’s proposed high-rise building at 801 Olive Street has been redesigned by a new, unspecified architect. Although the fundamentals of the project remain the same (363 apartments above 10,000 square feet of ground-floor commercial space and a four-level parking podium), the retooled development plan calls for a tower that is both taller and slimmer than previously approved. The now rectangular-shaped building is set to rise 33 stories (352 feet), representing a six-floor increase from the previous design by GMP Architects.

801 Olive Street is one of several skyline-altering developments planned for the northern section of South Park, including a 50-story condo project from the Onni Group and a 33-story apartment tower from CIM Group. However, it is a more vertically challenged neighbor that has arguably generated the biggest news for the neighborhood. Carmel Partners’ seven-story G8 development is slated to bring 700 apartments to the Downtown market, a larger total than any of its sky-scraping neighbors. More importantly, the low-rise building will feature a 42,000 square foot Whole Foods Market when it opens in 2015. The high-end grocer has been listed amongst the most sought-after retailers for Downtown residents in recent years, perhaps second only to the elusive Trader Joe’s. 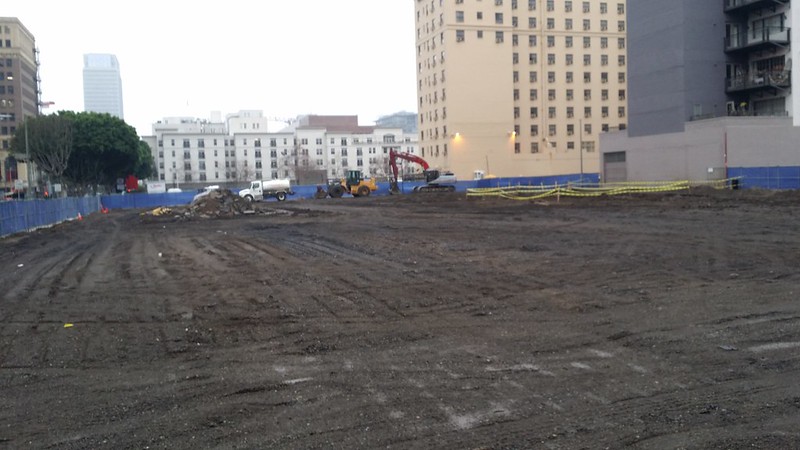 This is truly GREAT news for the new magnet corner at 8th and Olive…where a Freehand Hotel, and 350 unit Apt./Whole Foods are already nearing completion!