Developers have pledged to build a new public school for Jersey City as part of a $370 million housing development planned for the city’s Paulus Hook neighborhood.

The 200-student school, for pre-k, kindergarten and first grade students, will be the second privately funded public school to open in the city in recent years. Today’s announcement comes less than two weeks after the public-school district opened its first new public school in a decade, the state-funded School 20 on Ocean Avenue.

The 28,000-student school district faces overcrowding issues that it believes will become more acute as residents flock to the city’s new high-rises and families decide to remain city dwellers instead of fleeing for the suburbs. In a statement, Mayor Steve Fulop said initiatives like the new school, planned for Columbus Drive near Washington Street, will help ease those overcrowding issues.

“This project represents an amazing opportunity for Jersey City to be innovative at how we look at both development and creating new school facilities in an urban setting,” Fulop said. “What’s even better, without spending a dime, we’re getting more mixed-income housing, preserving affordable housing, and building a brand-new public school for young children.”

The new 35,000-square-foot school and residential tower are planned for 25 Columbus Dr., on an existing parking lot adjacent to the 23-story Paulus Hook Towers. The location is three blocks from the Waterfront.

The developer behind the project is PH Urban Renewal, a joint venture of L+M Development Partners and Low-Income Housing Corporation. Both have offices in New York. L+M is a part owner of Paulus Hook Towers.

The school district has agreed to purchase the new school for one dollar, a deal approved unanimously by the school board in August.

Details of the residential development that would accompany the new school have yet to be revealed. The city Planning Board is expected tonight to approve changes to the Paulus Hook Redevelopment Plan that would allow the developers to build as many as 750 new apartments on the site. Paulus Hook Towers has 308 units.

“We look forward to embarking on this project with the support of Mayor Fulop and to providing much needed school seats and mixed-income housing that is responsive to the needs of this growing community,” Jonathan Cortell, vice president of development at L+M Development, said in a statement.

Thirty seven of the units in the new tower would be set aside as affordable housing, the city said today.

It’s not known when construction is expected to begin. The final site plan would need to be approved by city planners, a step separate from tonight’s expected approval of changes to the area’s redevelopment plan.

This might turn out to be pretty tall, going by the number of units. On the other hand, this site is pretty massive so they could go with one large bulky tower or multiple shorter towers.

Walked by yesterday. Im not sure how much of this block is encompassed in this proposal, but most of the block is a large parking lot right now.

The plan is leading to a war of words between Mayor Steve Fulop and Ward D Councilman Michael Yun.

Should be amended to 53 floors, according to an application filed with the Jersey City Planning Board:

Planning Board has approved the application for this project. Construction to “start” this winter. 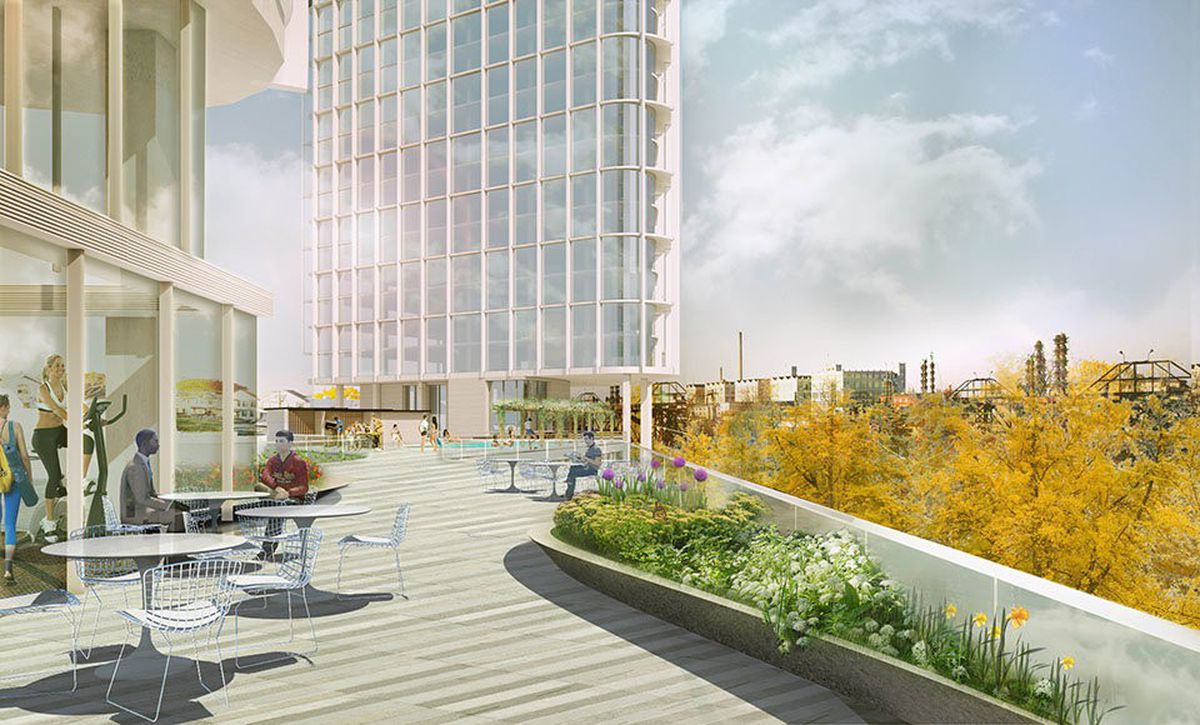 New renderings! Looks great! Wish the design was better though. But it’ll help this major roadway look more integrated with the rest of the city. Right now, this whole stretch of Christopher Columbus has tall, black metal fences that negatively impacts this area. Good change!

The existing Paulus Hook tower on site has been getting that reclad for about a month now.

At first, I thought it was just routine fixes on the corner areas. But now the whole building is fenced off.

Stil doing facade repair work for the apartment building next to the site. Photos by Oron_Zchut 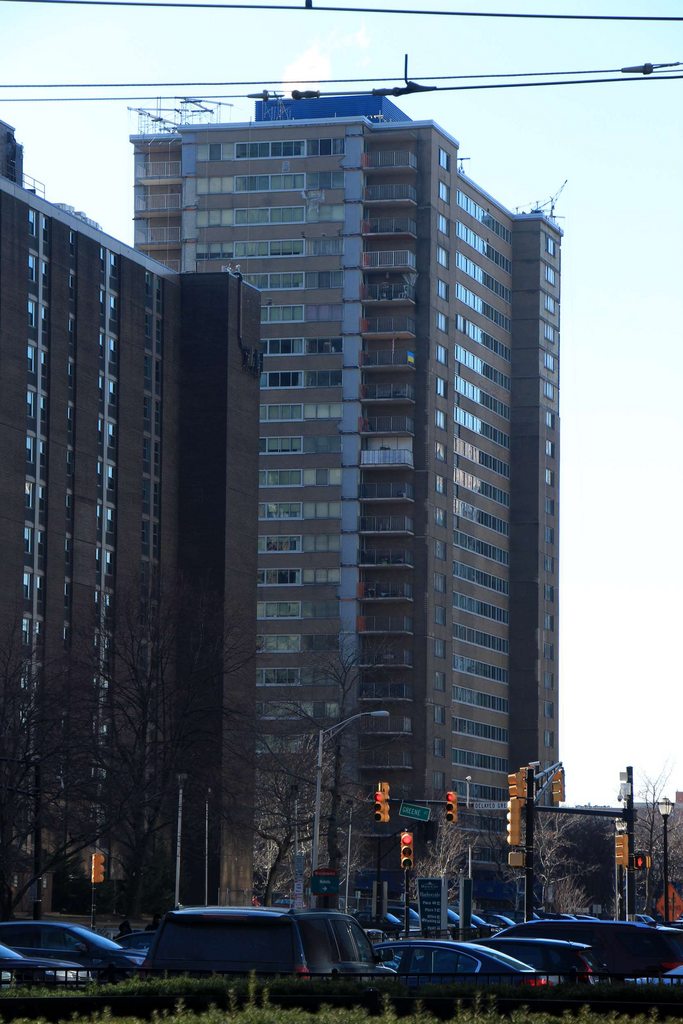 Today a few pieces of heavy equipment were delivered and a crew was onsite to begin some initial staging work. Looks like they’ll probably start ripping out the parking lot within the next few days to make way for the new multi-level parking structure. 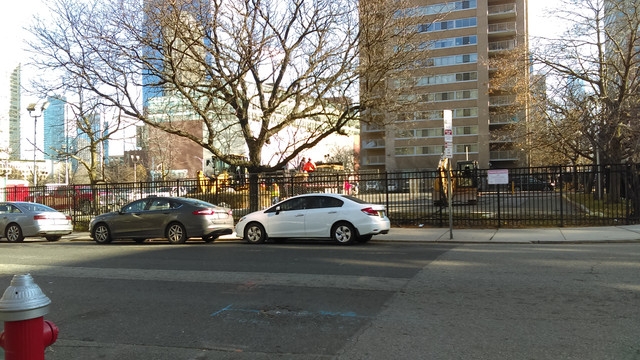 according to a filing with the FAA, they can build up to 626’. Solid.

The parking lot is cleared of all cars. I think it’s been closed for awhile now. Construction should start soon

The title of the thread should be revised to reflect that this building will have 57 FLOORS, as mentioned in the FAA filing above as well as this Planning Board notice that appeared in the Jan 16, 2019 edition of the Jersey Journal:

I hope they release an updated render with the changes to the facade materials and designs. I liked the use of brick, let’s hope they kept that material

Saw this on an investor presentation on Mack-Cali’s website. Looks like they are also in negotiations to buy 107 Morgan, which will look to be another 55+ floor tower. It’s the site directly in front of 321 Warren in this photo. It doesn’t have a page but thought I’d post it here to show its unit count compared to 25 Columbus.

They have been ripping up the pavement and starting some test piles the last few weeks.

Piles in the ground and a pile driver on site. This one is probably U/C though I didn’t see any workers on site when I swung by today around 4pm.

So I saw this facade mockup on the site of Harborside Tower 5, but I’m not sure what facade this is for. This could be for the Terminal building reclad, or for 25 Columbus. It’s a white panel facade so more likely it’s for 25 Columbus 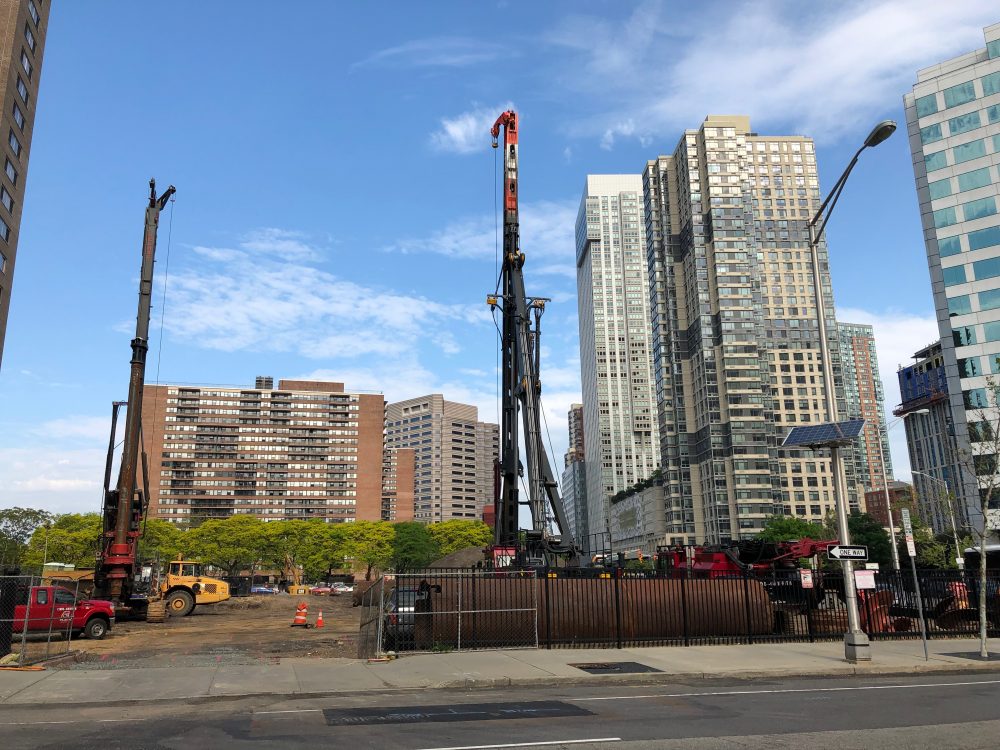 The first stages of excavation at 25 Columbus Drive are apparent as the asphalt from the former parking lot is now being ripped up. This will become the future site of a new mixed-use complex that will rise 626 feet tall and 57 floors high. Handel Architects is designing the proposed structure, while L+M Development Partners is the developer of the downtown Jersey City project. A total of 750 rental apartments, a 35,000-square-foot privately-funded public school for levels pre-K through first grade, four storefronts covering 16,485 square feet of retail space, and a public plaza will soon be built.

Recent photos show a large amount of progress with a couple of pile drivers, excavators, and a tall crane rig with hollow steel caissons on the property. The construction project is bounded by Columbus Drive, Washington Street, Warren Street, and Montgomery Street. Handel’s new skyscraper will mostly occupy the northern end of the plot, while an existing apartment building will remain standing on the southern side.