Jamaica Is About to Look Way Different

The master plan and rezoning are done, parcels are assembled, and BRP Cos is about to break ground on a 600k SF apartment and retail building that will spark loads more private development. (Take a photo now, so it can become a then photo in 20 years.)

We snapped Greater Jamaica Development president Carlisle Towery, whose org has been teeing up redevelopment to take advantage of the $350M JFK AirTrain station and the connected LIRR and subway hubs. If all gets built, the master plan allows for 4.3M SF of new development.

GJD recently completed an assemblage of 11 parcels and sold it to BRP, which is doing its diligence on exactly what will be included. GJD real estate head Justin Rodgers tells us it’ll have at least 400 apartments, at least 80k SF of retail on the first two floors, and 300 below-grade parking spots.

Here’s the corner of Sutphin Boulevard and Archer Avenue now. The subway entrance right behind Carlisle will move across Archer to the north side of the street, and Archer is being widened. The $225M, 20-story BRP project will replace this three-story Duane Reade building (demolition is about to begin—you can probably get a good price on some trail mix and gauze) and extend more than halfway down the block along Archer (beyond the reach of our camera). Carlisle tells us the rezoning upped density near the transportation center but balances itself by maintaining or even downzoning in the more residential surrounding area.

Walking from Duane Reade along Sutphin, we came across this underpass under the rail lines. These once were the LIRR loading docks. Now that the mechanicals have been rearranged and pushed to the back of the space, it’s becoming a 6,000 SF retail arcade called The Shops at Station Plaza.

The first tenant is already in: the waiting room for the 15-minute shuttle to Resort World Casino. 4,500 people take the ride every day.

At the south end of the arcade, Able Management is building a 24-story, 240-key Hilton Garden Inn to support JFK, which is underserved, Carlisle and Justin tell us. It’ll break ground this year and deliver 18 months later. (It will also be haunted by ghost trees on top of the second floor.)

From the AirTrain station, we snapped part of the hotel site (the green building in the foreground) and part of the next parcel that GJD hopes will attract a private developer. The site can support as much as 1.2M SF. Nearby is a third parcel that could accommodate an even larger project.

Across the street and next to the air train station is yet another full-block parcel. The Sutphin-facing strip is destined to become a park. And other parcels are awaiting development, as well.

The 368-block rezoning allows for 5,200 housing units, 2.1M SF of retail, 1.8M SF of office, and as many as 2,000 hotel rooms. Some developers have already started developing a few blocks from the transit hub, which we snapped above from Sutphin and Archer. Dermot’s 346-unit Moda at 153-50 89th Ave and Ciampa’s 190 units nearby have delivered, and apartments in The Bluestone Org’s 100-unit Norman Towers at 90-14 161st St are coming online now. 315 apartments accompanied by a bevy of amenities are coming to transit-rich downtown Jamaica. Officially named One Archer Avenue, the 24-story 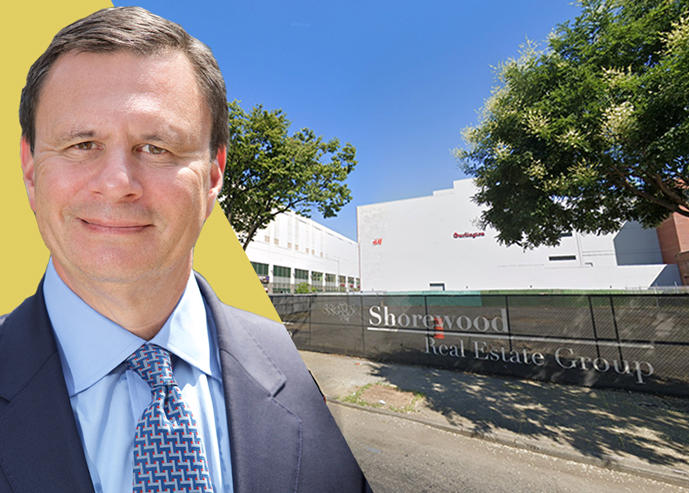 Shorewood Real Estate Group has inked a new mortgage on its Opportunity Zone in Jamaica, Queens after closing on a $88 million construction loan.T

how can apply to this property? 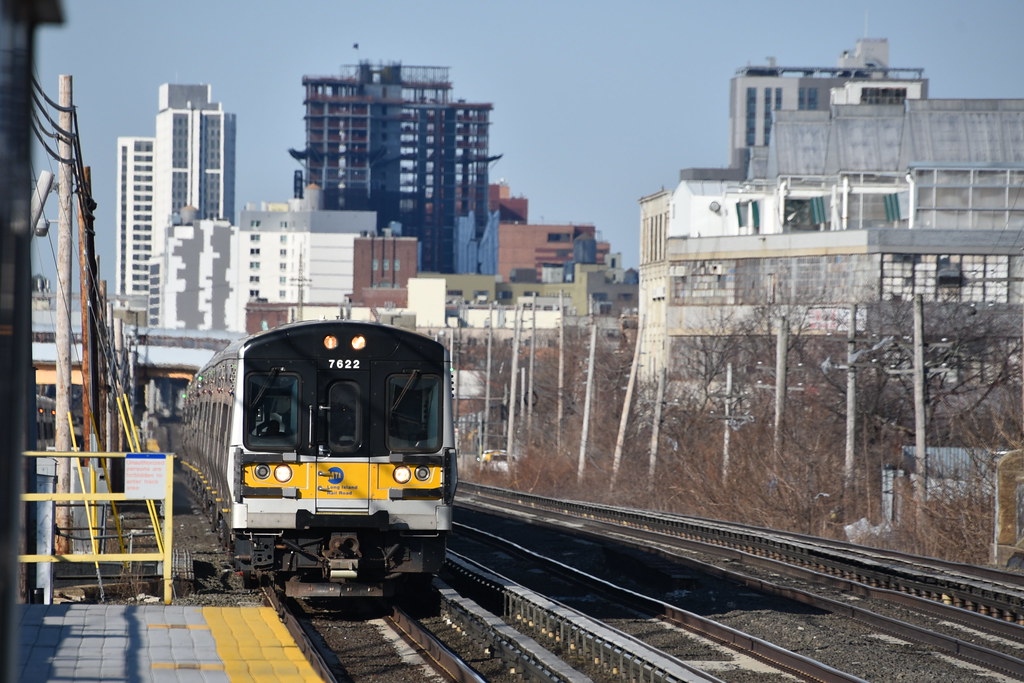 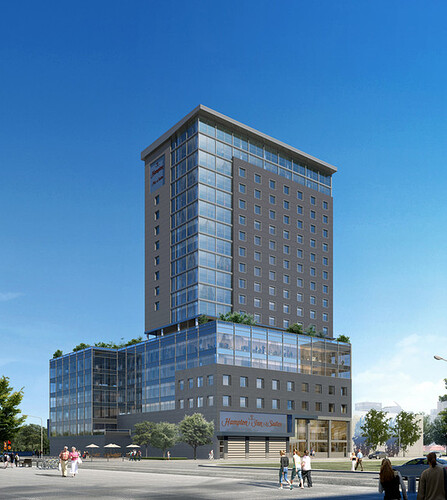 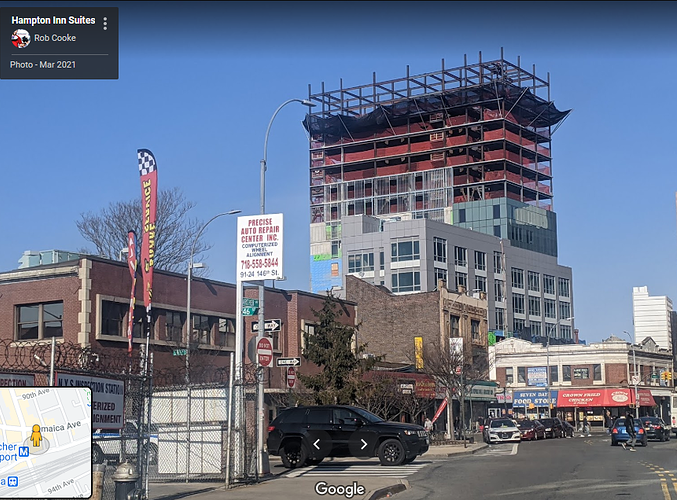 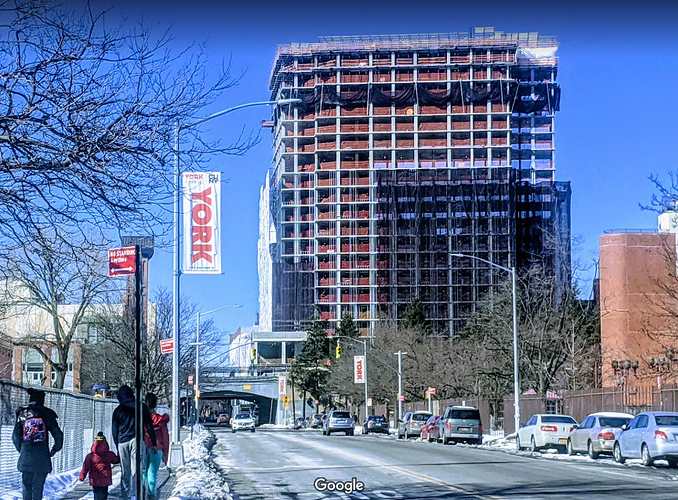 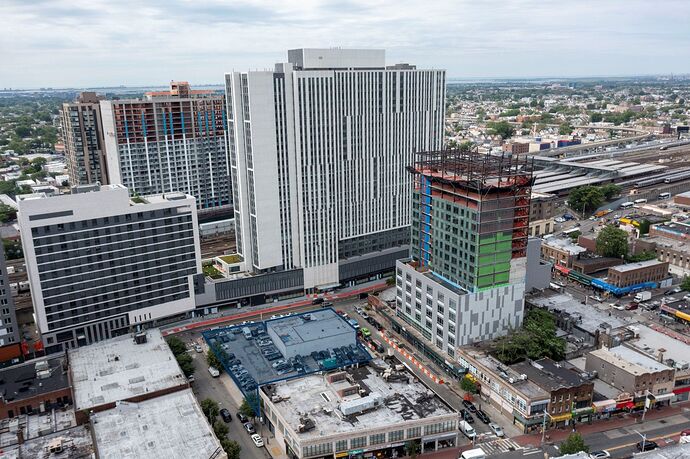 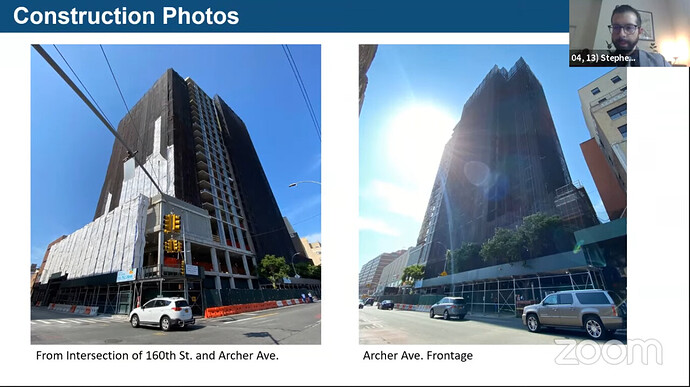 A rendering has been revealed in time for the marketing launch of One Archer, a 23-story mixed-use residential tower in Downtown Jamaica, Queens. 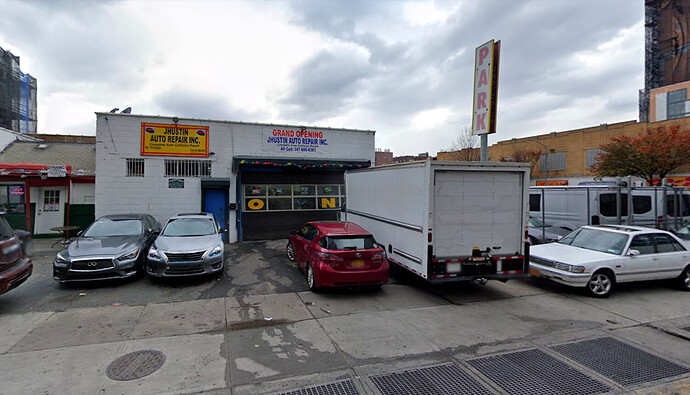 YIMBY has the latest permits filed for a 20-story mixed-use building with affordable housing at 147-27 Archer Avenue in Jamaica, Queens. 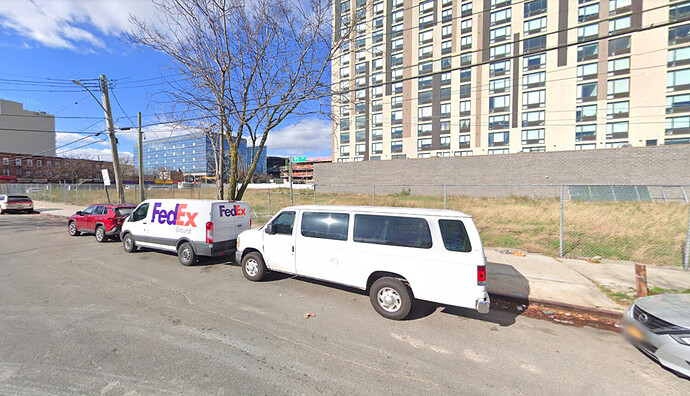 YIMBY has the latest permits filed for a 23-story mixed-use building at 147-35 95th Avenue in Jamaica, Queens. 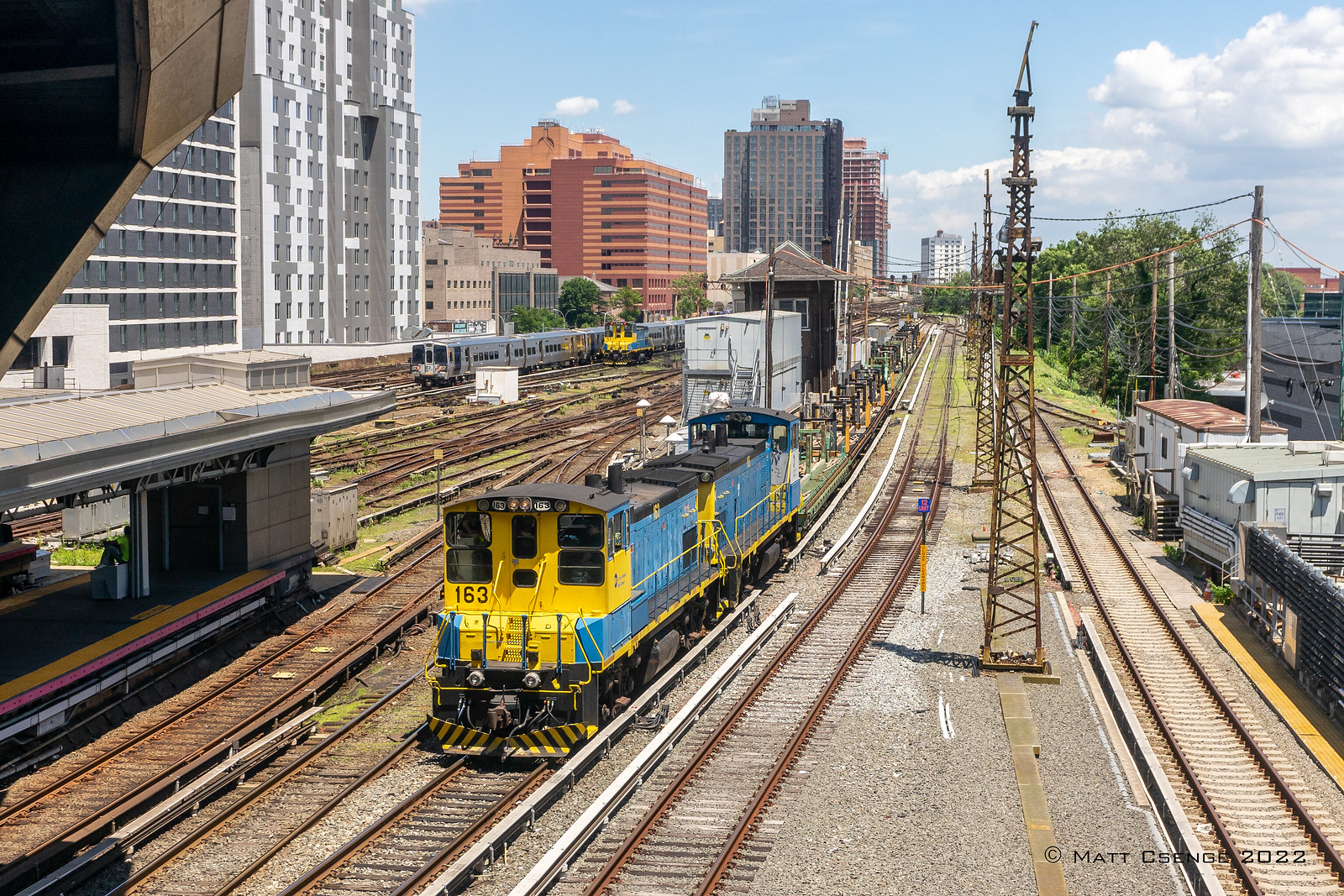 Not Just Dashing Commuters! by Matt Csenge, on Flickr

Nice to see an influx of transit-oriented development in this area. Hopefully the other side of the LIRR (right) also has some development that will rise up - enveloping it entirely. 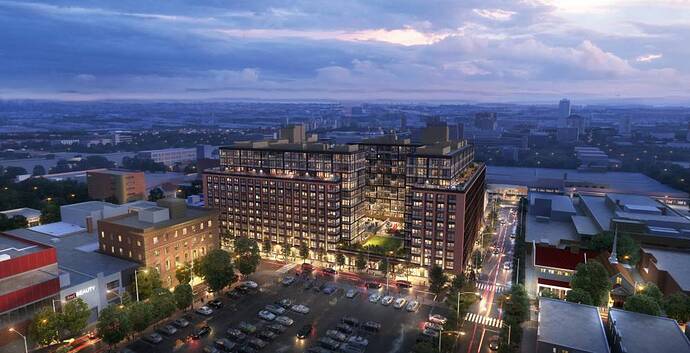 I completely think this rezoning was a disaster, but a good disaster. This is a stretch of Archer Avenue with the newly built generic white tissue-box looking skyscrapers that are, as per records, not even filled to capacity. Drug dealing on every corner, prostitution, and bums walking up and down. Retail spaces not leased, and auto shops directly adjacent to residential. I am hoping this area gets cleaned up, especially with the influx of development. You can have development, but at least upkeep the area around it. This neighborhood with all the development can EASILY become the next Astoria or something in a few years. 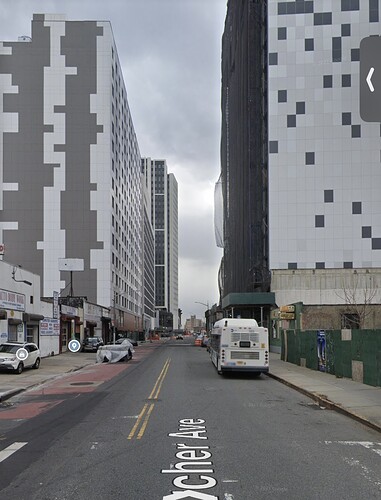 is a stretch of Archer Avenue with the newly built generic white tissue-box looking skyscrapers that are, as per records, not even filled to capacity.

What are they? Residential? If they are maybe it’s because the rents are high, and look at the state of the neighborhood.

I’ll keep saying it until it happens, they should fully legalize prostitution.

New renevue stream for the city and state.
Effectively putting out of business pimps and the like
Regulations for the safety of everyone involved
Another reason for people to come from abroad and domestically
Plus who knows, you might even see a boom in development from the added business 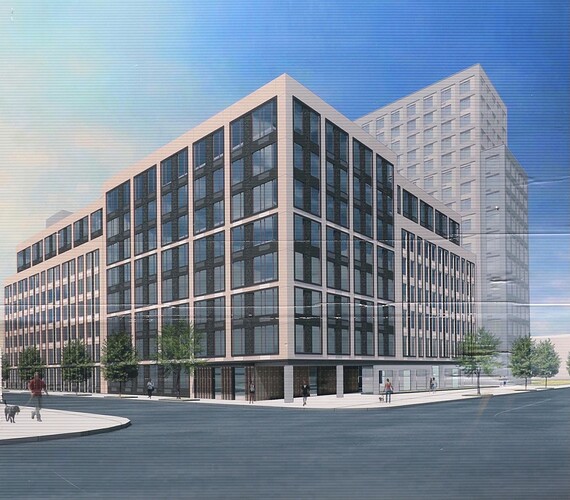 Construction is rising on 88-20 153rd Street, an eight-story, 207-unit project from Hill West Architects and The Chetrit Group in Jamaica, Queens.

I’ll give it maybe ~6 years until we start seeing the effects of gentrification hit the area. Lots of positive potential. Maybe Jamaica can be a new tech hub? 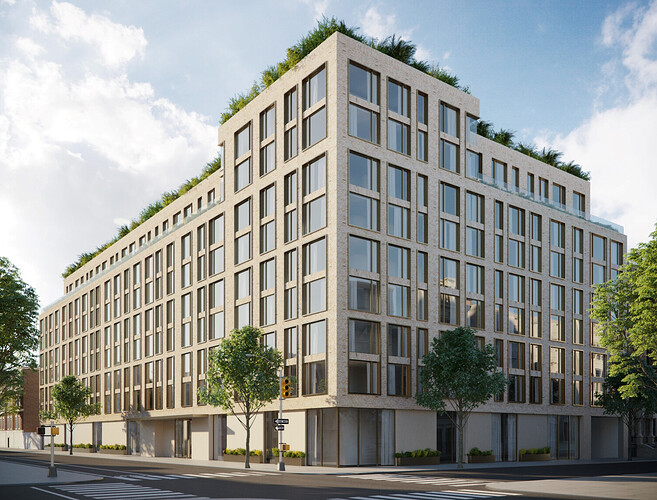 Construction has topped out on 153-10 88th Avenue, a nine-story, 223-unit project from Ismael Leyva and Rufus King Park Development in Jamaica, Queens.