While Ian Schrager’s new Public hotel on Chrystie Street is not a secret by any means, most of the news has been about behind-the-scenes updates (i.e. permits approvals, etc). Our first real world encounter with the project, however, arrived on scene yesterday. That’s right. The plywood fencing is now a semi-permanent mainstay here at 215 Chrystie Street for the foreseeable future. Get used to it.

With the new addition is also a preview of the madness. A rendering. It shows some layered glasswork that towers far above the Avalon mothership, casting shadows on Sara D. Roosevelt Park.

215 Chrystie Street is the first ever New York City location for Schrager’s “Public” brand, and carries a payload of 28 stories (314 feet). As we’ve previously documented, the first eighteen floors are designated lodging (161,170 square-feet), while the remainder is earmarked for residential use (33,386 square-feet).

Winter 2016 is quoted as projected completion date. Seems like a rather rosy prediction, though.

A tipster sent along the first rendering of 215 Chrystie Street on the Lower East Side, which is being developed by Ian Shrager and The Witkoff Group. Yesterday, The New York Post reported that Herzog & de Meuron is designing the structure, while Beyer Blinder Belle is the architect of record.

DOB permits were issued last month, and indicate the building will measure just shy of 200,000 square feet; the bulk will be divided between 370 hotel rooms, but the tower’s upper levels will have eleven residences, spanning 33,386 square feet. 215 Chrystie Street will be capped by three levels of mechanicals, which will be sheathed inside a crown — evident in the zoning diagrams — and the structure will top-out 314 feet above street level.

Given The Post’s report and additional DOB filings — which also note the project’s name as ‘The Chrystie Street Hotel’ — the condominiums will likely be super-luxe. Floors 19 through 22 will have two residences each, while 23, 24, and 25 will have full-floor penthouses.

According to the Schedule A, each of the half-floor units will measure approximately 2,300 square feet, while the penthouses will clock in at just over 4,700 square feet apiece. Given the enormous floor-plates, unobstructed views, and access to hotel amenities, pricing will be astronomical, likely setting records for the Lower East Side, which had previously been removed from the super-luxe boom. Interiors will be designed by John Pawson.
The design appears to have undergone refinements compared to previously renderings; whether the most recent image is final or not remains to be seen, but it appears to match the glimpse posted on-site.

Appearance-wise, 215 Chrystie Street will be significantly more attractive than typical new developments on the Lower East Side, and Herzog & de Meuron’s involvement will hopefully herald a new icon for the neighborhood skyline. Masonry appears to divide the windows, which increase in size as the building transitions from hotels to condominiums; upper floors will have soaring ceilings, and views from within will be dramatic and expansive.

Completion of The Chrystie Hotel is expected by the winter of 2016.

A helpful tipster has sent along a fresh set of renderings for the Herzog & de Meuron-designed 215 Chrystie Street, on the Lower East Side, which will likely become the neighborhood’s first iconic high-rise. Ian Schrager and the Witkoff Group are the developers behind the project, which will have a hotel on lower floors, and condominiums above.

The 370-room hotel will rest beneath eleven palatial residences, split between half-floor and full-floor configurations. As the latest batch of renderings make clear, the ceiling heights on upper levels will be soaring, and proportions will be enhanced by floor to ceiling glass. 215 Chrystie will stand 28 stories and 314 feet tall.

In terms of comparisons, Herzog & de Meuron’s 56 Leonard is already rising, and the architects have another project imminent at 357 West Street, where they are also partnering with Schrager. 215 Chrystie will be eye-catching in its own right, and the new images are the first to illustrate the sheathing that will hide upper mechanicals, ensuring the building’s pinnacle tops-off in a cohesive and attractive way.

Each of Herzog & de Meuron’s designs utilize a raw, concrete facade, though the developments will be differentiated by strikingly different forms; the Jenga-like silhouette of 56 Leonard would tower over the relatively angular 215 Chrystie, and 357 West Street is a departure from both high-rises, offering a softer and more flexible take on typical concrete rigidity.

Per on-site signage, completion of 215 Chrystie is expected at the end of 2016. [QUOTE]Indeed, Ian Schrager’s forthcoming Public Hotel at 215 Chrystie Street will feature food and beverage by Jean-Georges Vongerichten. Being such a high-roller project, this is a match made in heaven.

According to application materials submitted to Community Board 3 today, the Michelin-decorated chef paired up with Phil Suarez to helm the gargantuan ground level operation. It’s a three-pronged endeavor that includes restaurant, coffee bar, and garden area. All licensed to serve more than 240 patrons.[/QUOTE]

Came across this mock-up of 215 Chrystie Street at Fumihiko Maki’s 51 Astor Place.

The glass looks great. Herzog & de Meuron doesn’t settle with bad glass. It’s too bad that the building is set back so much, though. 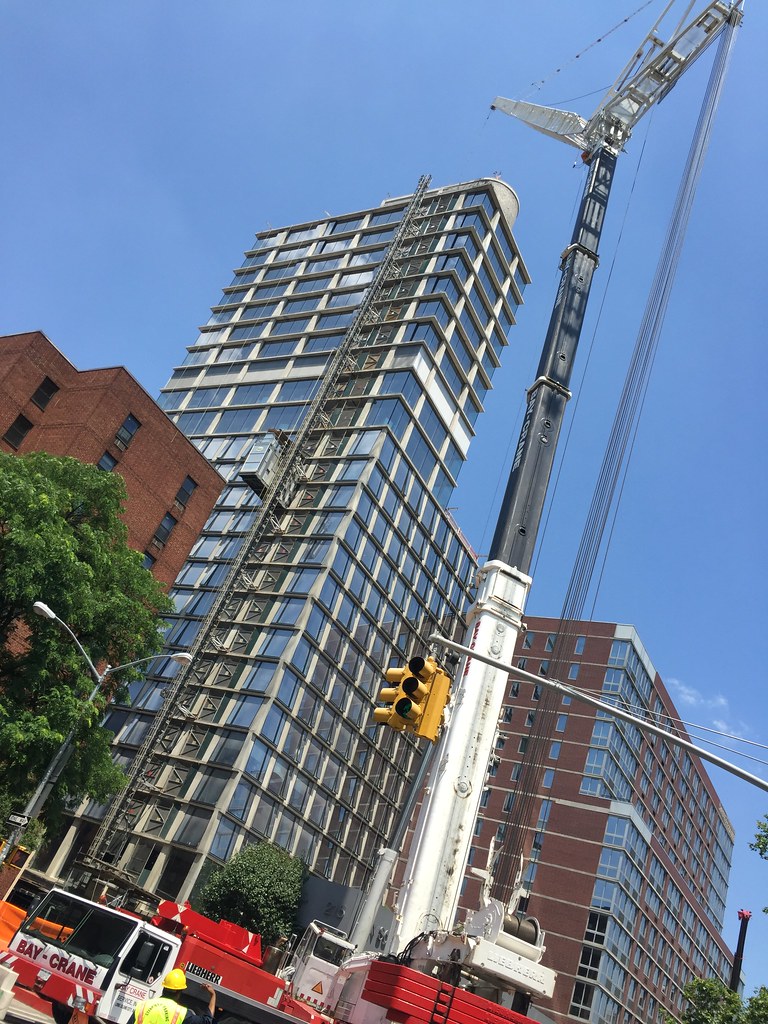 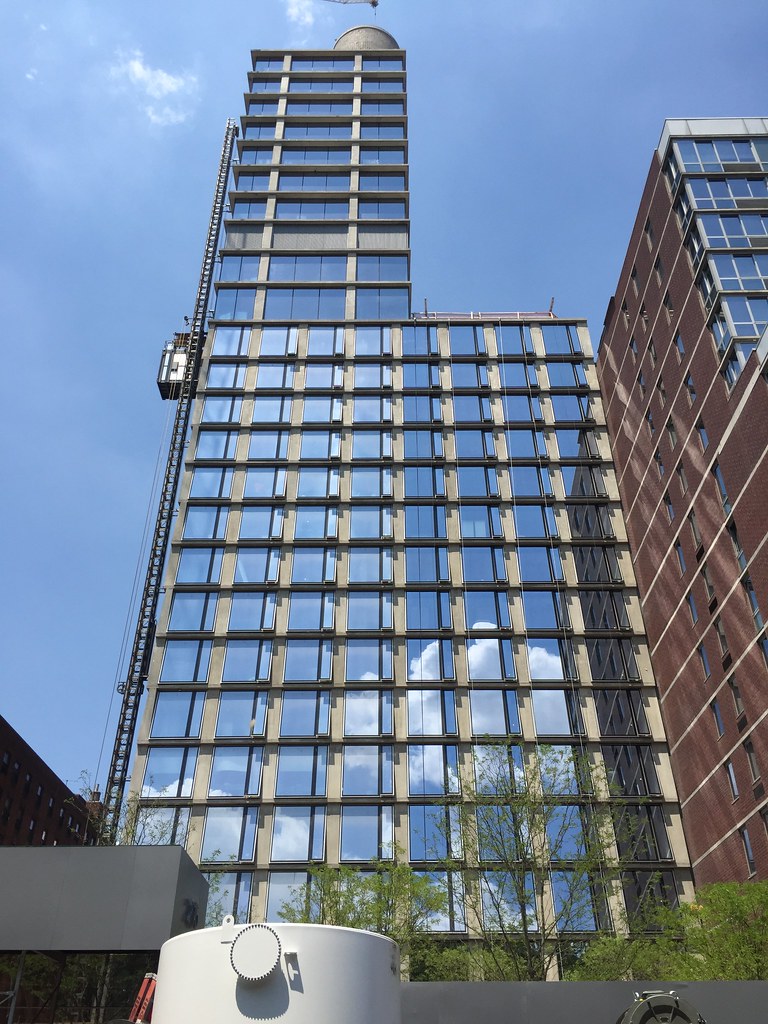 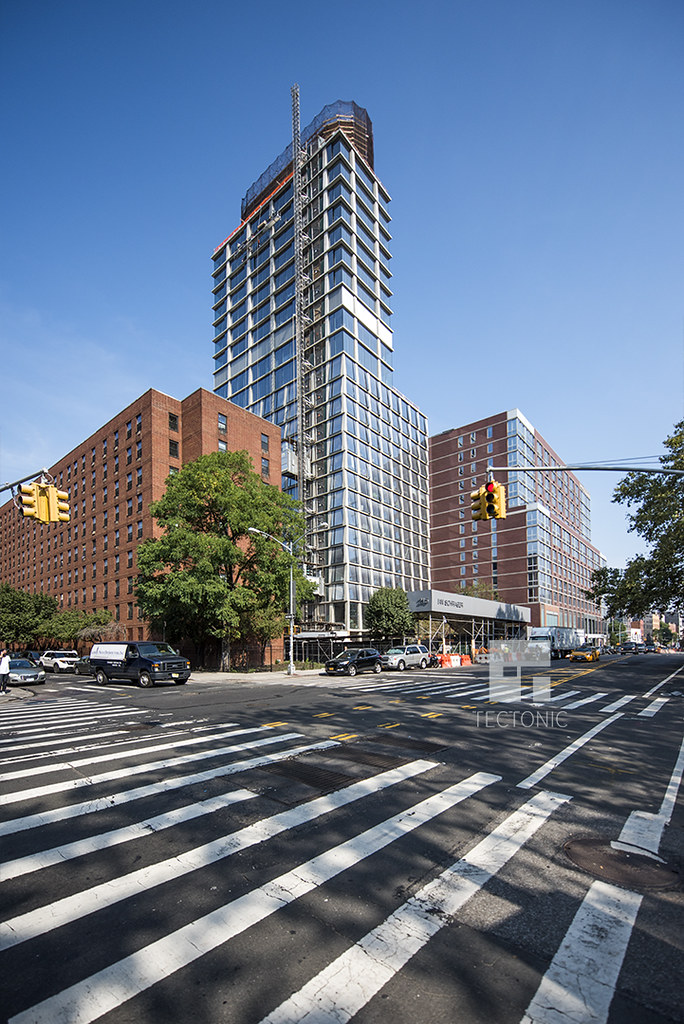 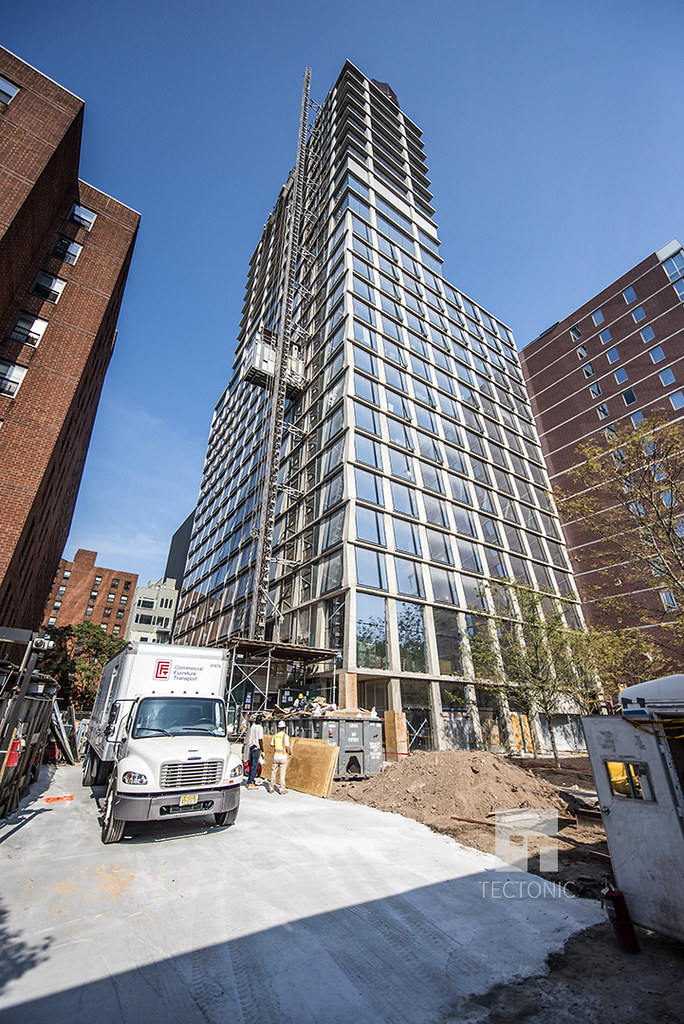 Great photos, Tec and 5b.