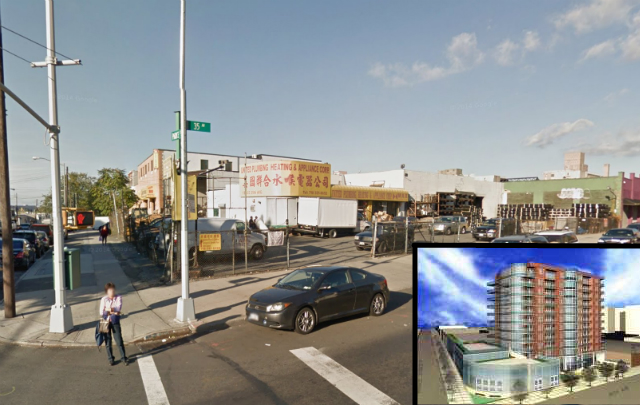 More than years after they asked for the initial zoning change, Flushing-based developers Christopher and George Xu finally look set to redevelop the property at 134-03 35th Avenue in a 14-story aggressively mixed-use tower, now home to their building supply company on the edge of downtown Flushing.

The building would include 134 apartments, a 210-key hotel, six retail spaces, a hotel restaurant and bar, and a “community club” (back in 2010, the brothers were working with John Liu to provide space to the SelfHelp Prince Street Senior Center). The permit was filed by Flushing-based My Architect, led by Jon K. Yung.

The project will push the boundary of downtown Flushing northwards, with residential and commercial development slowly creeping up towards and beyond Northern Boulevard, in an industrial area that was mostly rezoned in 1998 (aside from the Xus’ property, for which they won a spot rezoning in 2010).

The Xus’ path to becoming some of the most prolific builders in eastern Queens – with projects in Flushing, Jamaica, and Long Island City, among other places – follows in the footsteps of America’s other great immigrant builder groups, from Eastern European Jews in New York City starting in 19th century to Cubans in Miami in the twentieth. Building supply companies, like the one the Xus are redeveloping (“United Plumbing, Heating & Appliance Corp.”), are common entry points into the world of real estate development. And back in 2003, they told the Times Ledger that they were able to finance the project with profits from building smaller three- and four-family in Flushing and Corona (a stepping stone to the big leagues that has, sadly, been largely closed off).

Back on 35th Avenue, the apartments would be fairly small, at around 750 square feet on average for a total of a bit over 100,00 square feet, with two penthouse units on the 14th floor. While that size would normally suggest rentals, condos are more common in Flushing and other Chinese neighborhoods throughout the city.

The project includes 207,000 square feet of space that counts towards zoning, but the large amount of underground floor area and the massive garage – 223 car parking spaces in a bilevel underground garage – bump up the total construction area to a whopping 350,000 square feet.

While normally in outer borough projects the Department of City Planning forces developers to build more parking than they otherwise would, in Flushing, it’s the market that’s driving the large quantity of parking – by our calculations, only about 100 spaces are required. Builders in Chinese neighborhoods often build much more parking than required for large commercial projects, presumably owing to the sprawl of the community deep into the most suburban parts of Queens and elsewhere in the region.

The proposed hotel will occupy the building from 1st to 5th floor, with 206 rooms. From 6th floor to 15th floor will be 130 luxury condominium units. There will be 18,452 square feet community facility at the 1st floor. The total floor area will be approximately 344,000 square feet, including 200 underground parking spaces.

This project is anticipated to break ground in 2016.