After striking out with a few other projects, a Dutch-based architecture firm may finally make its Manhattan debut.

If built, the property would be the firm’s first in Manhattan. Shohei Shigematsu, the partner who directs OMA’s New York office, is designing the building. SLCE Architects is the architect of record.

A representative for OMA did not respond to requests seeking additional information on the building’s design.

It was reported by 6sqft last week that OMA founder Rem Koolhaas might be the specific architect of the building. Koolhaas, who worked with the late Zaha Hadid when she worked at OMA, has had a few false starts in the city.

His design for Slazer Enterprise’s One Madison Park — a residential tower that fit between its neighbors like a Tetris piece — was eventually scrapped, as was his vision for Ian Schrager’s Astor Place hotel. His design for a waterfront tower at 111 1st Street in Jersey City — a structure resembling three blocks stacked precariously perpendicular — was also never realized.

OMA led one of the winning teams in the U.S. Department of Housing and Urban Development’s Rebuild by Design competition, for its plans to protect Hoboken, N.J., from flooding. Earlier this week, the firm released a design for its first skyscraper in Tokyo, which is also designed by Shigematsu.

The condo building on 23rd Street is expected to have 133 units across 225,000 square feet, according to filings with the Department of Buildings. The property’s ground floor will have four retail condos collectively spanning 12,000 square feet.

sho’s past design proposals in new york include a range of cultural and commercial schemes including an expansion for the whitney museum of american art (2000), a residential tower at 23 east 22nd street (2008), and an office tower at 425 park avenue (2011), as well as 111 first street, a mixed-use tower in jersey city. the condominium tower at 122 east 23rd street will form OMA’s first ground-up building in manhattan. sho shigematsu is also the designer of this year’s costume institute spring exhibition at the metropolitan museum of art, ‘manus x machina: fashion in an age of technology.’

images of the project at 122E23rd will be revealed next month.

Toll Brothers City Living is aiming for a $503.5 million sellout at its Gramercy condo development at 122 East 23rd Street, according to an offering plan filed with the Attorney General’s office.

The development firm filed plans to build a 133-unit tower in November. Located between Lexington and Park Avenues, the site is a block away from Extell Development and HFZ Capital Group’s condo tower One Madison at 23 East 22nd Street and from Continuum Company’s condo development 45 East 22nd Street. It is also close to another Toll Brothers condominium, 160 East 22nd Street.

Toll Brothers’ $503.5 million projected sellout translates to an average of around $3.8 million per unit. That’s well below Continuum’s projected average price of $8.6 million per unit at 45 East 22nd Street, but also significantly above the Gramercy neighborhood’s median sales price of $1.7 million, according to Trulia.

Toll Brothers bought the site from nonprofit United Cerebral Palsy for $150 million in September 2013. The lot continues from 23rd to 22nd Street, and is sometimes referred to as 121 East 22nd Street.

Toll Brothers is one of the city’s most active condo developers. It is currently developing the Pierhouse condos at Brooklyn Bridge Park, among other projects. The site is huge, I’m curious of what is going to be built on 22nd St. It’s so exciting to finally have an OMA designed building in NYC.

today
Sorry! This shot was taken in a bus. 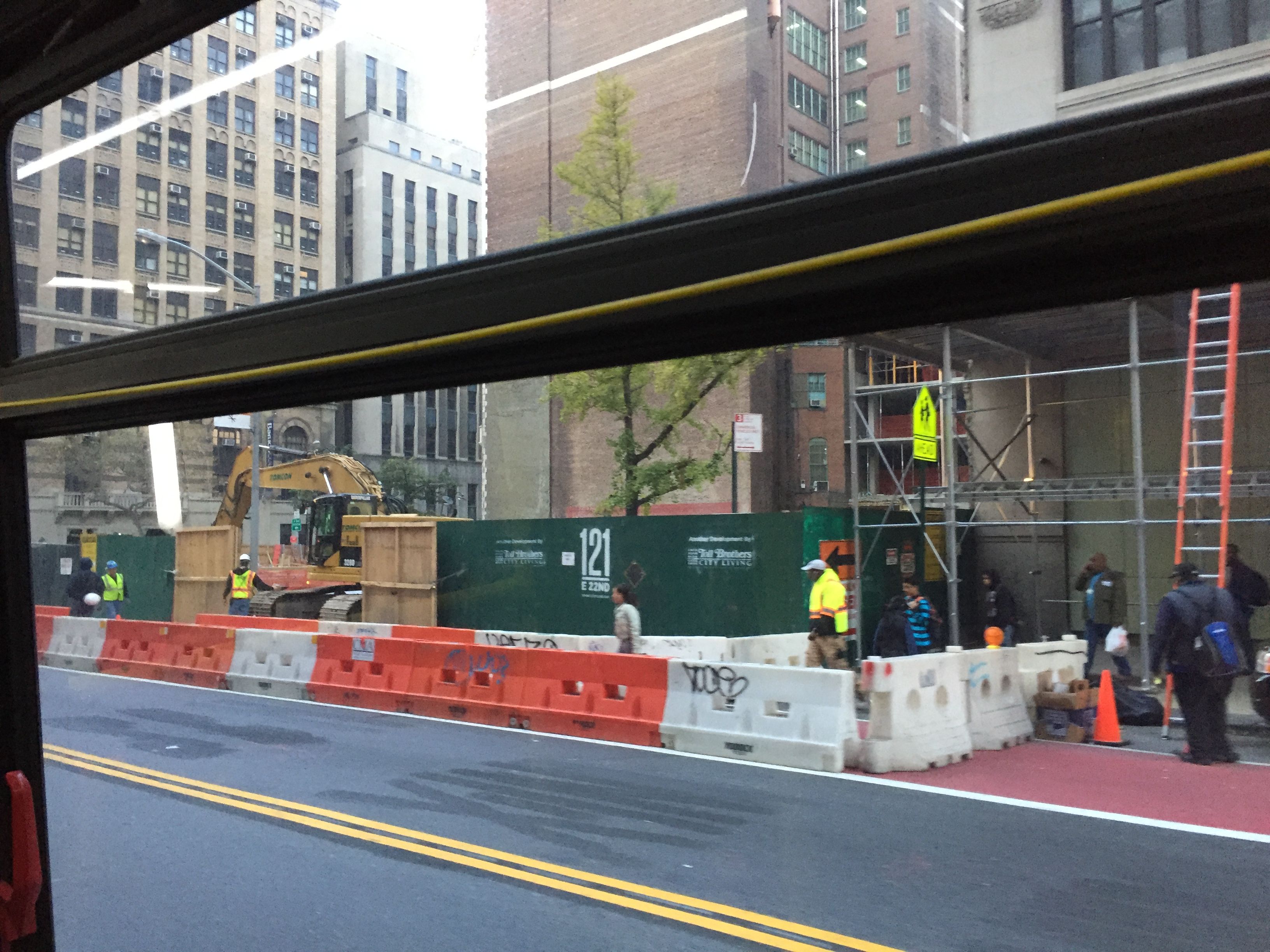 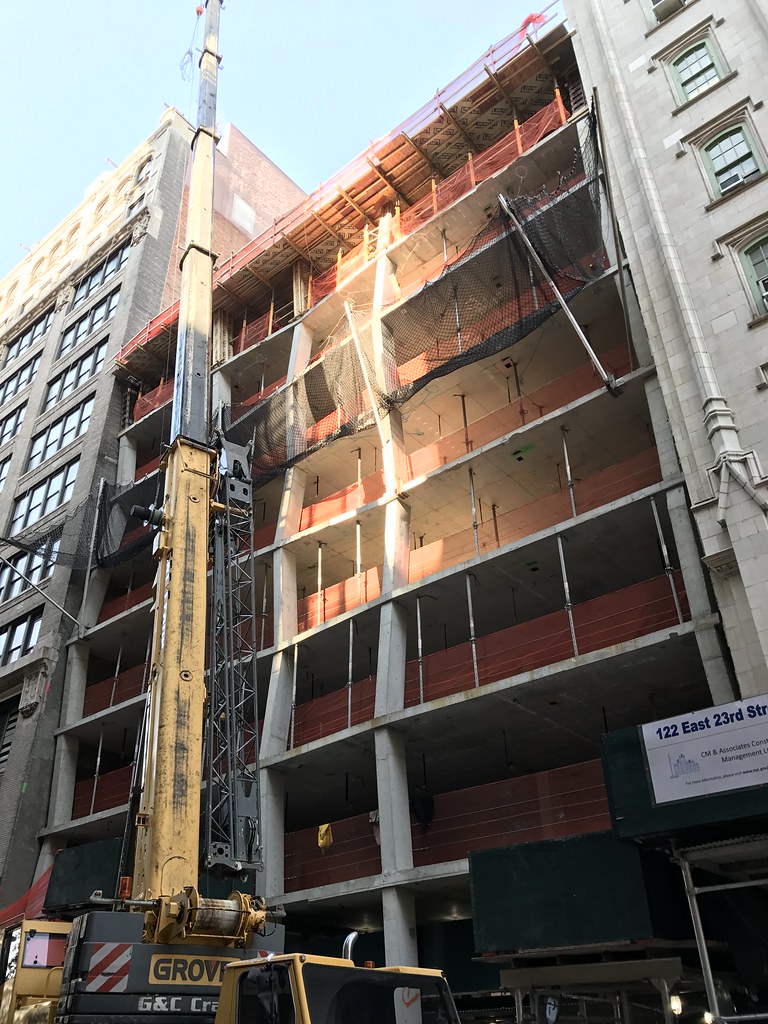 Is that the backside? If so, this thing is making some serious progress. 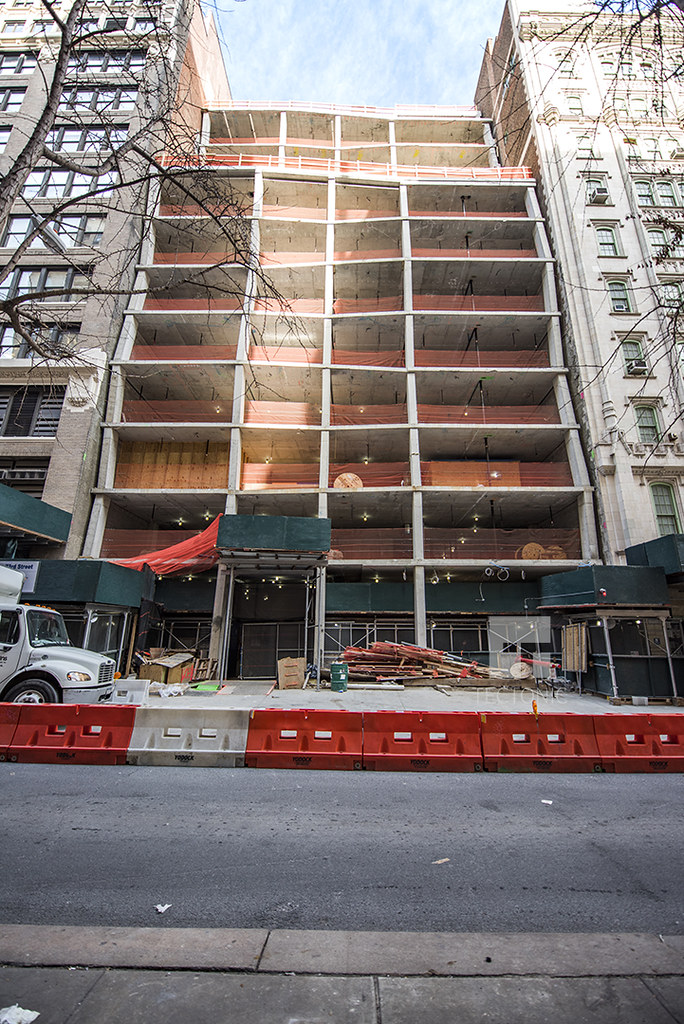 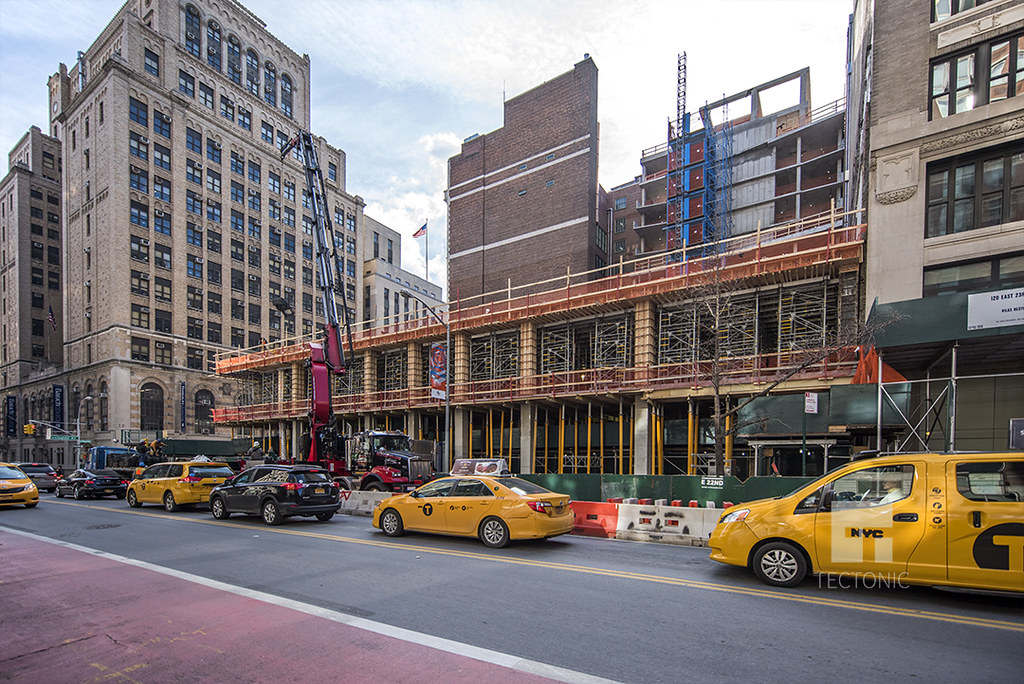 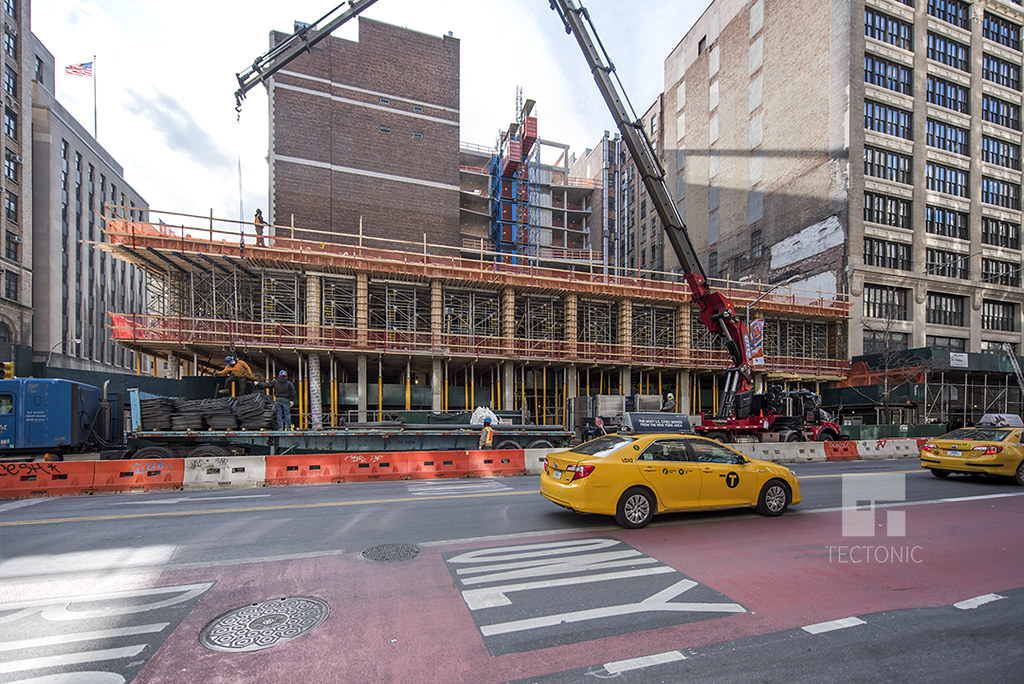 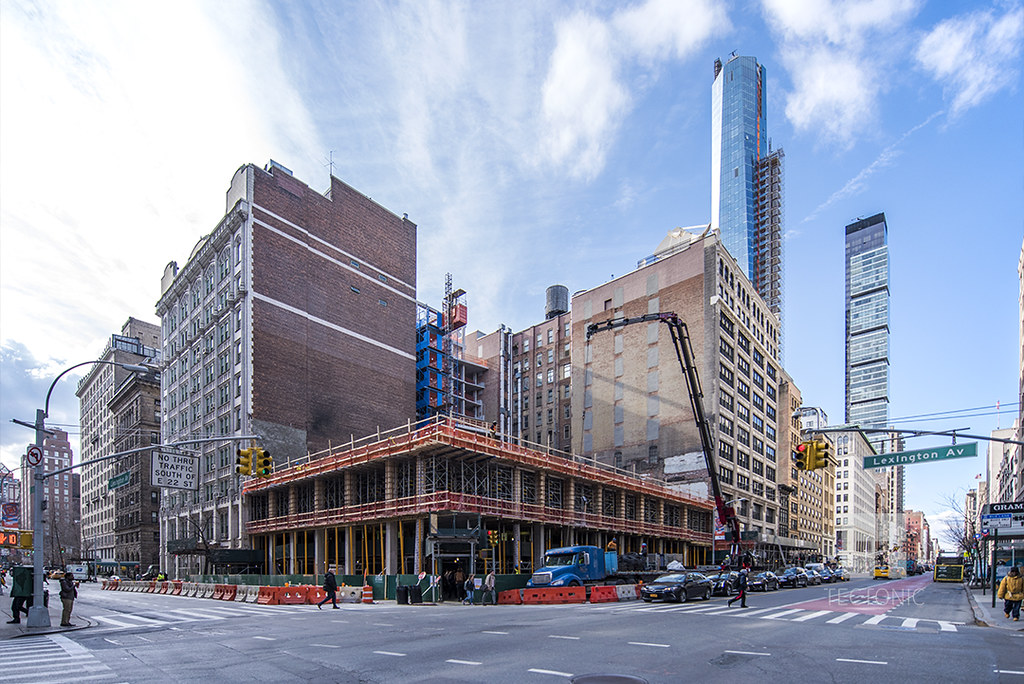 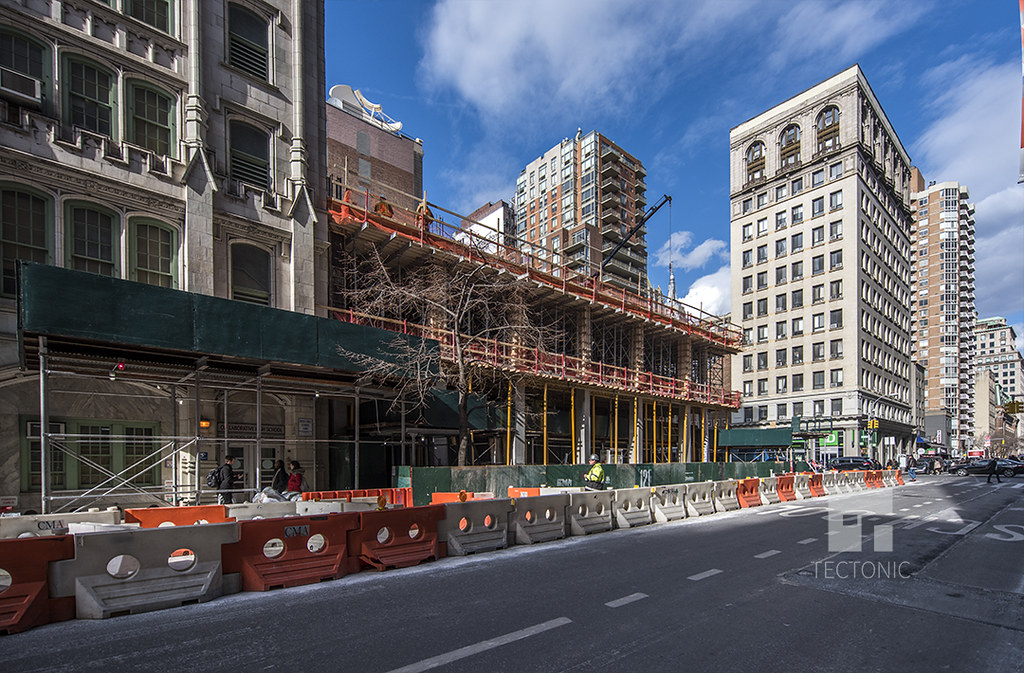 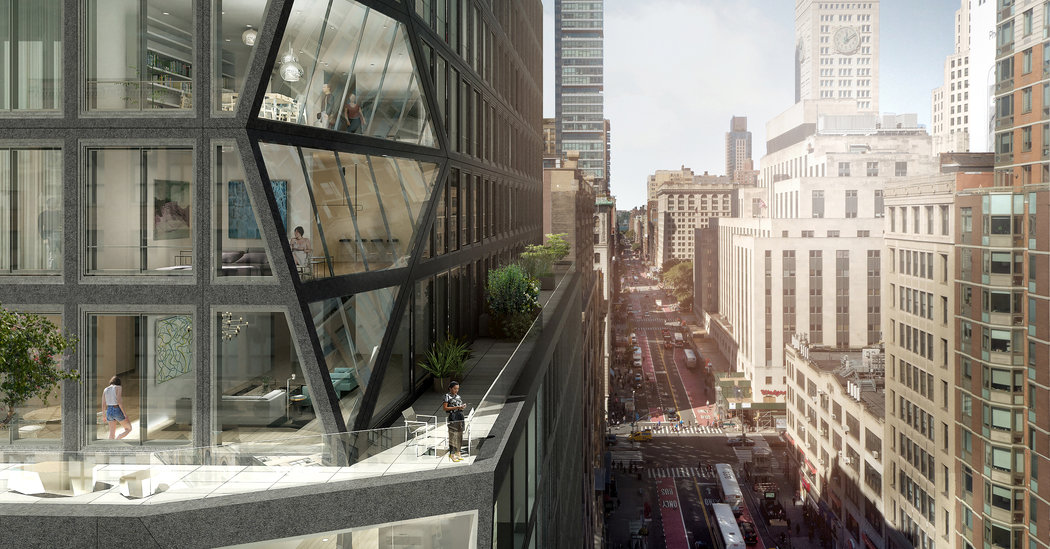 A Gramercy Condo With a Three-Dimensional Glass Facade

Reminds me of a psychedelic version of 55hudson yards’ podium facade. Looks really cool so far.