The developer behind the 646-foot Missoni Baia condo tower in Edgewater signed a deal for water and sewer at the project.

700 Edgewater Development, LLC will pay a low connection charge estimated at just over $53,000, thanks to a relatively small number of units (146) and a credit for demolishing 88 apartment units on the site.

A. Oktay Cini signed the paperwork on behalf of the developing entity, which is controlled by Vladislav Doronin. 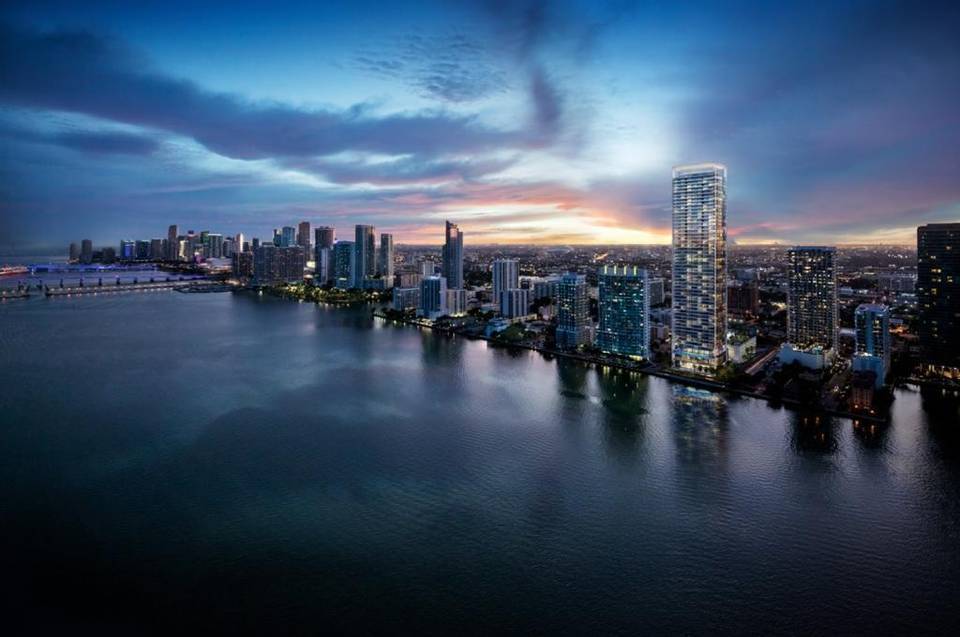 While most developers are pulling back as Miami’s high-end condo market slows, Vladislav Doronin is pushing forward with a 57-story luxury condo tower, and two more projects after it.

The Russian real-estate magnate’s Miami-based development company OKO Group is spending about a billion dollars to acquire the land and develop three local properties. Going up first: the $350 million Missoni Baia in the Edgewater neighborhood.

“Miami has become a 24-hour city and has become internationally significant,” Doronin said in a phone interview. “Miami’s airport is ranked second for international passengers in the United States. I also like the good weather and the happy lifestyle in Miami.”

Missoni Baia will seek to leverage both weather and lifestyle with views of both Biscayne Bay, which it fronts, and the city from its 146 multimillion-dollar residences. 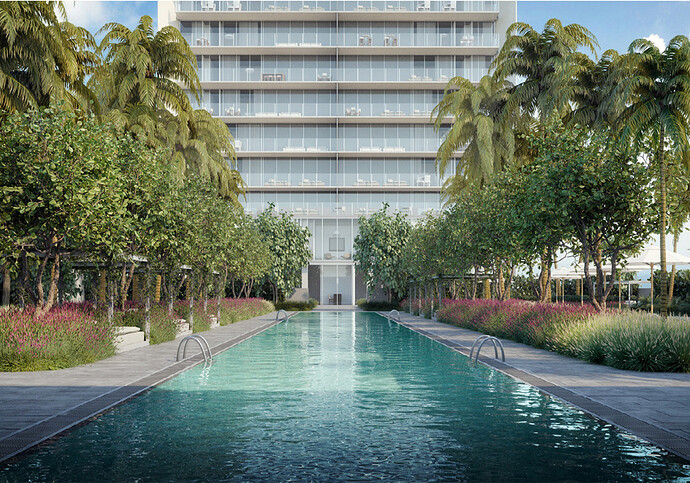 About 30 percent of units at Missoni Baia have been sold, according to in-house broker Fortune International.

Fortune recently took over sales in the building after convincing the developer to reduce unit sizes to meet market demand, a representative told the SFBJ.

Prices remain the same – $900 per square foot, substantially higher than other newly completed resale units nearby. 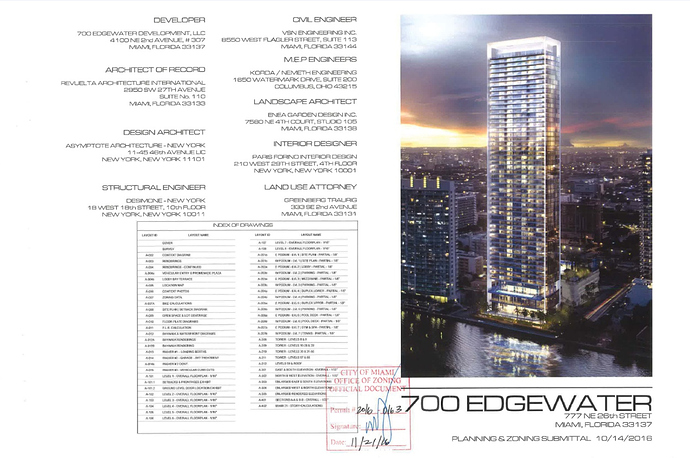 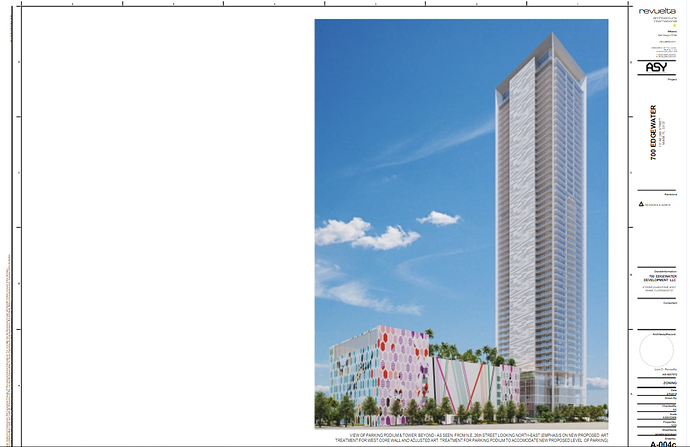 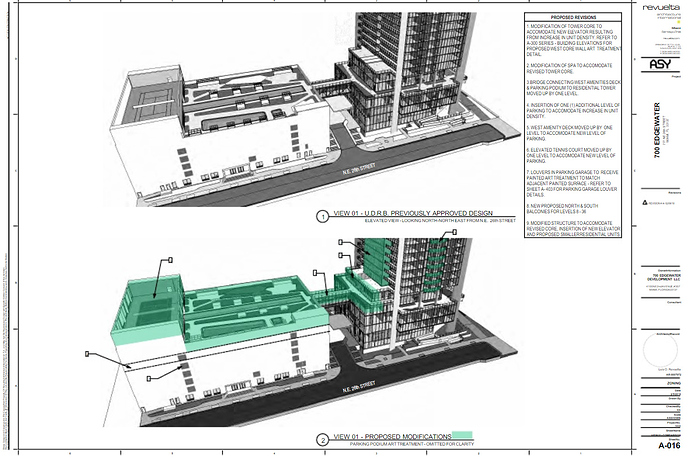 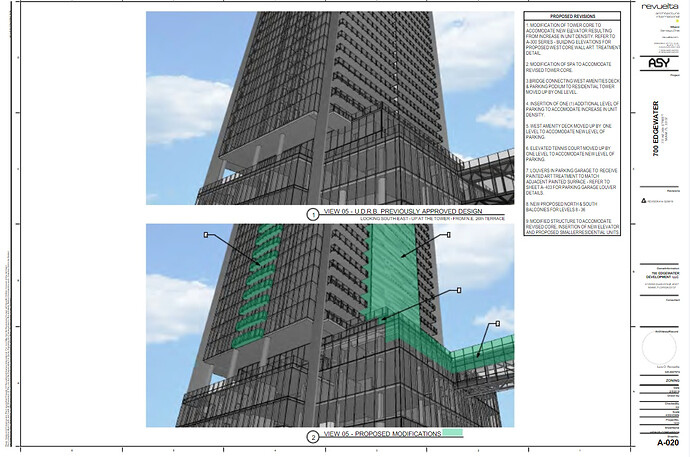 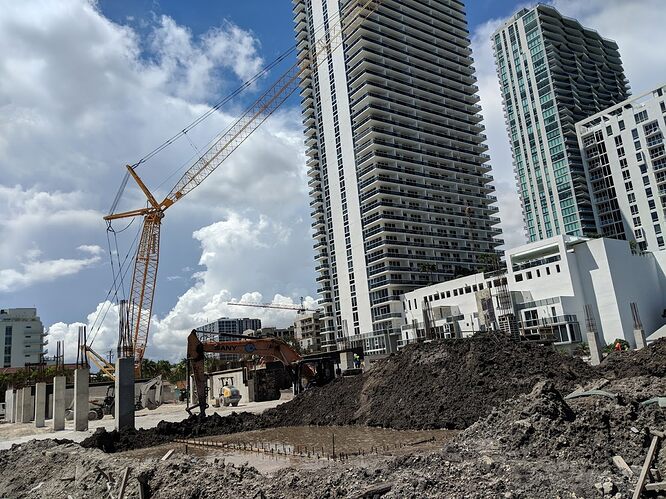 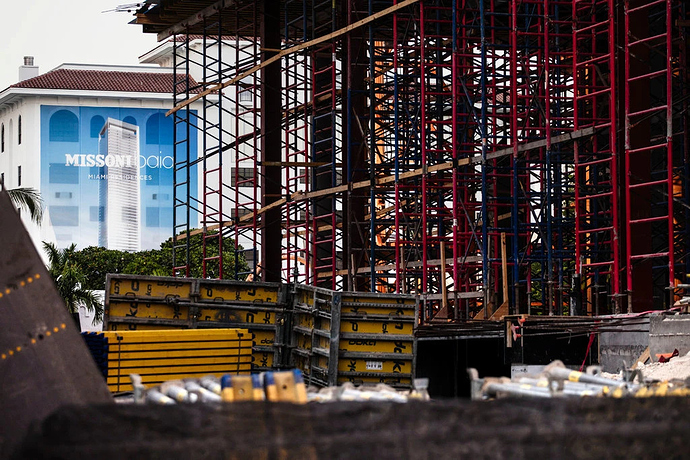 image1024×683 349 KB
Missoni Baia, a 249-unit tower under construction in Miami’s Edgewater neighborhood, in a licensing deal with the fashion brand Missoni.Credit…Scott McIntyre for The New York Times 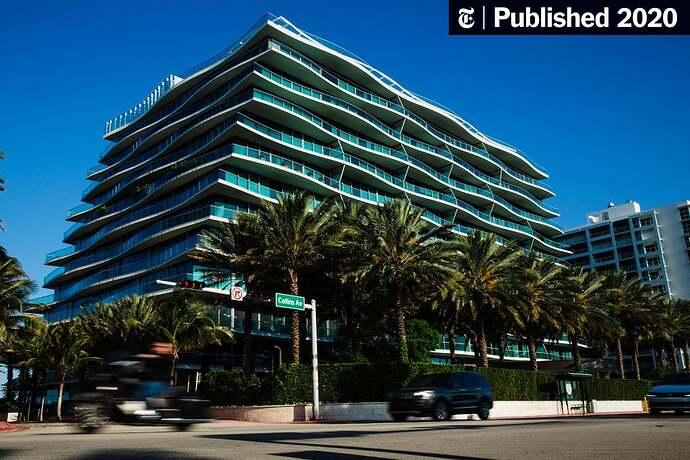 The Latest Fashion Accessory in Miami: A Luxury Condo (Published 2020)

Upscale brands are licensing their names to developers in South Florida who are looking to stand out in a crowded market. 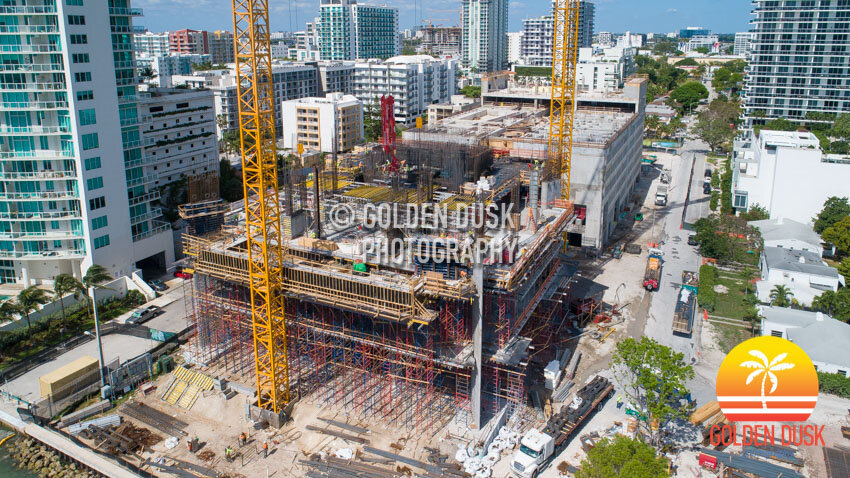 The 57 story Missoni Baia in Edgewater has now started going vertical and has reached the 4th floor after starting foundation work in April 2019. The parking garage began construction first in September 2018 before the sales center was... 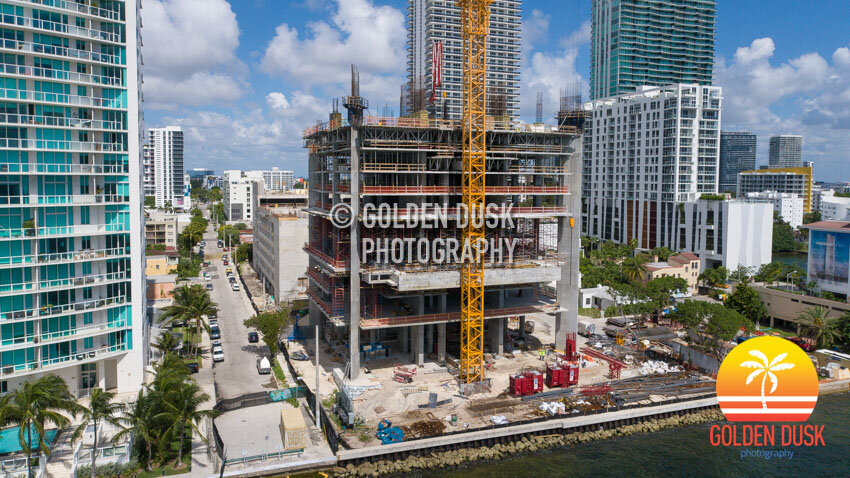 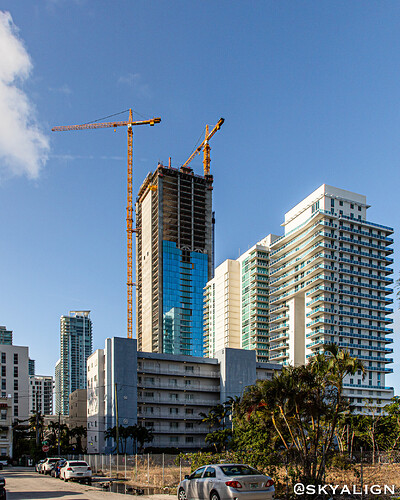 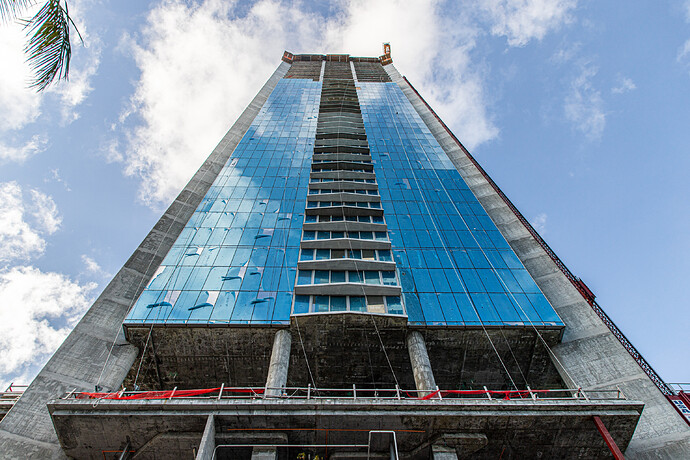 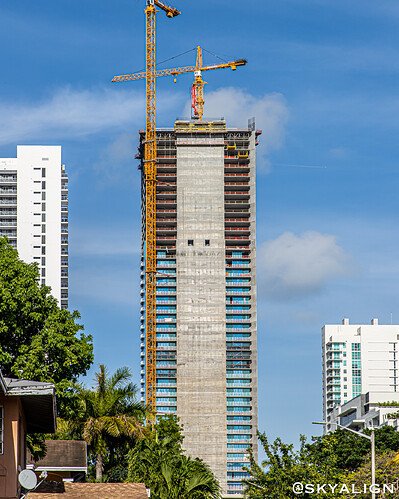 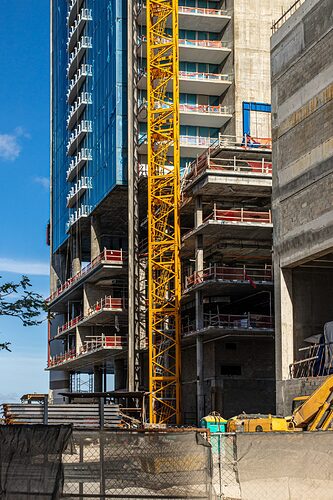 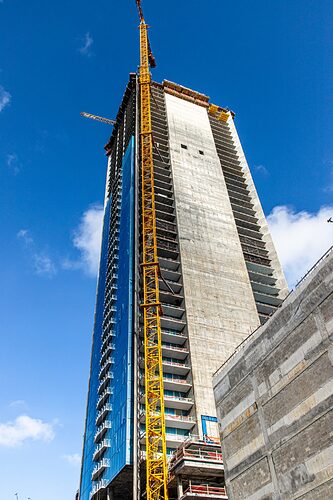 About 49-50 floors up so far. Topping out relatively soon. 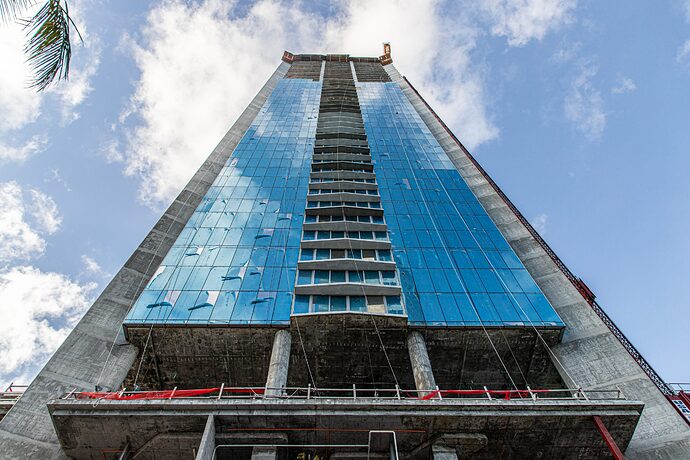 that’s a brutal core wall. I’m guessing it will get paneled.

Yeah it’s pretty brutal, but looks like it’ll be clad with a massive art mural of some sort. 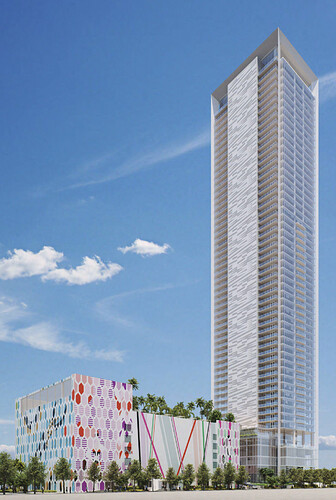 The original design was cool though, the core was hidden by the terraces. 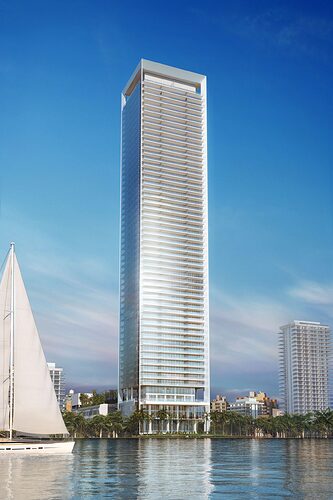 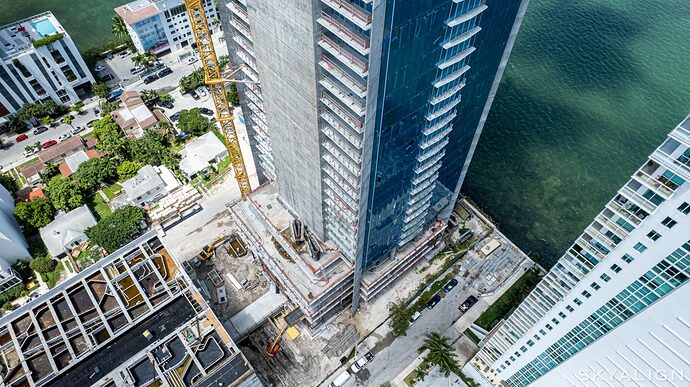 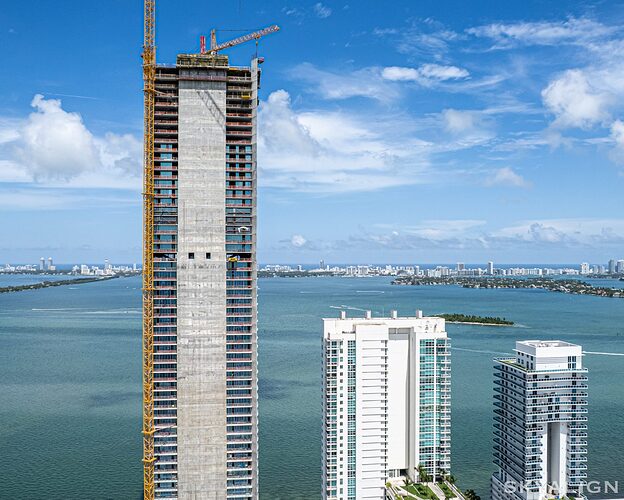 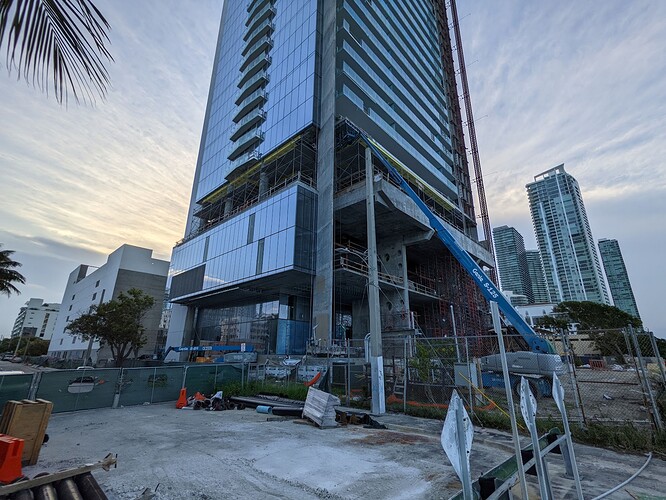