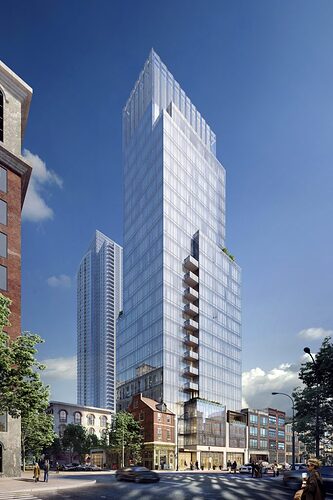 „ The first design was revealed in the beginning of 2017, featuring a façade composed of a mix of red brick and glass, but was denied by The Historical Commission.

A year later, the current iteration was revealed by Toll Brothers with an increased floor count and added setbacks. The proposal received a more positive reception, and the property was purchased in the beginning of 2019. Demolition of the former low-rise occupants of the site occurred from September through March.

702 Sansom Street will be the first high-rise building directly on Jewelers’ Row, though the surrounding area features a number of mid- and high-rise structures, most notably The St. James, a 498-foot-tall, 45-story, 307-unit apartment building located at 200 Washington Square West half a block southwest of the proposal site.“

The troubled Toll Brothers abandoned the site, the site is now being managed by Pearl Properties. The demolition was completed by April 2020 and work was shut down from Covid…nothing has happened since then. The site is currently a hole with vegetation starting to overgrow. But Pearl stated in December that the design won’t be finalized until six months from then, and construction is expected to start by then