A new PRS residential development for ‘young professionals’, the developer has found a new gap in the market due to the abundance of student developments in the city. The build is to sit on the London Road roundabout, next to Magpie Securities proposed head office, which has yet to be revealed.

The low-rise section consist of brick and cast concrete cladding, the brick itself is to compliment the Lace Market warehouses behind, forming a new layer to the streetscape in the foreground.

The 10 storey tower will be wrapped in an ornate lace-inspired interwoven metal frame forming the balconies, the lace also wraps around the bottom of the windows in the low-rise section. The colour of the cladding is designed to compliment the sandstone cliff and towering churches of the Lace Market.

A render down London Road facing the city:

Viewing away from the Lace Market Cliff where the building dominates the area, you can also see the vacant site next door which is to house Magpie Securities head offices:

The site, taken by me:

The site from above:

A diagram of the ground plan:

Indicative impact on the skyline (in black):

The cladding inspiration from the Lace Market skyline icons:

Brick cladding examples, the example on the far right is an indication of the final product:

Trivett Square, an office block proposed by Miller Birch to be built behind this site, as shown in red in the below indicative skyline drawing:

Nice little project in the works – looks better than most new dev in NYC!

Thanks guys! The developer has a good track record of delivering some of the best new builds in Nottingham, of which have previously used brick with ornate engravings into the cladding. So I have hope this will go ahead

Some new higher res renders including a lower quality shot from above the city:

Nottingham’s historic Lace Market cliff face is to soon receive an abundance of life to the area following on from the city council approving the 85 unit apartment tower. Despite the controversy surrounding the location of the 10 storey build, the ornate detailing, classically inspired materials and slender profiles slung this proposal forward to become a potential landmark for this side of the city; a far cry from the current barren land and hand car wash on site.

Stepping up from 4 storeys making its way up to 10, this development varies in scale both gradually and dramatically. Rising higher towards the rear to six storeys, the lower-rise brick block creates a layered slope towards the built up cliff behind, whilst the tower shoots up on the far east side, taking inspiration from the church towers rising above the townhouses below.

The materials and forms were carefully decided based on the context of the proposal to its surroundings. The brick work and window formations takes inspiration from the base layers of the Lace Market, with their curved indentations flowing into the glass and strong lines fronting the street, whilst the tower takes its colour from the sandstone cliff and cladding used in the medieval churches above. All of this wrapped in a lavish lace-inspired interwoven metal frame forming the balconies, creating an elegant design which sits at one with the area with a contemporary twist.

Below are the renders which represent the finished product as approved by Nottingham City Council. Gifs are also visible displaying the current state of the site with whats to come.

Facing north west with part of the Lace Market looming behind. You can also see the tower crane for Lace Market Studios towards the right:

The view facing north east, the low rise white building towards the right may come down at some point to make way for a much larger block/s:

From the medieval lace market cliff looking south east, where you can also see Bio City under construction towards the left:

Height - 33m / 108ft Space - 80,000 Sqft / 7432 Sqm Use - Commercial (Bio Science) Developer - Nottingham City Council partnered with Bio City Architects - CPMG Website - https://www.biocity.co.uk/biocity/nottingham Expected Completion - 2017 Nottinghams Bio City is expanding, by an extra 80,000Sqft. The interest in such a development peaked when Walgreen bought out Boots, a Nottingham founded and based company, for £9Billion. Bio City has been in Nottingham for many years. With the peak…

Night time render with St Marys Church, dating back to 1377, lit up in the background gracing the skyline:

I have combined a render of the Former Shell site with the new proposal, Trivett Square to give an idea as to what the future skyline will look from this area:

All that needs adding to that view now is the proposal for Magpie Securities HQ, which will sit to the left of this proposal as per the above.

Further details and a thread of Trivett Square will be added shortly.

HyLyfe, a new sub-company of Nottinghams Monk Estate Group, have revealed their new website featuring the first of 4 projects in the HyLyFE pipeline. It is believed that this development along with the new Bridgford House proposal are the first 2 developments as part of the HyLyFE pipeline as they both total roughly 210 apartments; matching that as of the website. The 2 developments are to total 350 residential units.

A completion date of 2018 is expected as per the new website, looks like this is to start soon! 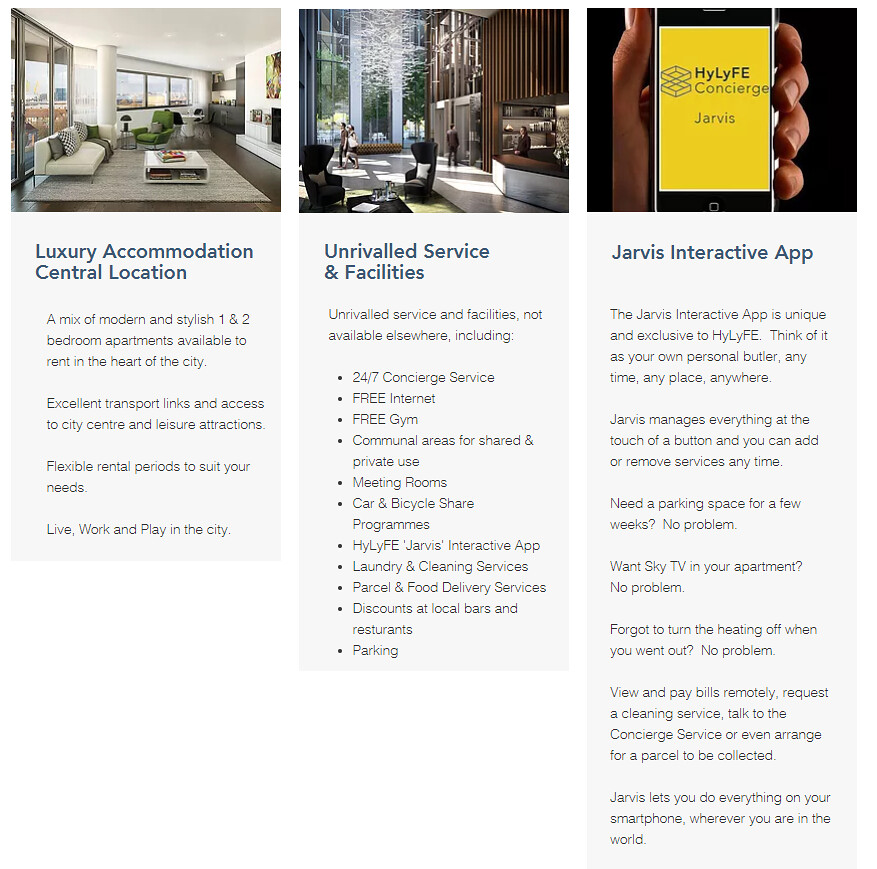 A reminder of what we’re getting: 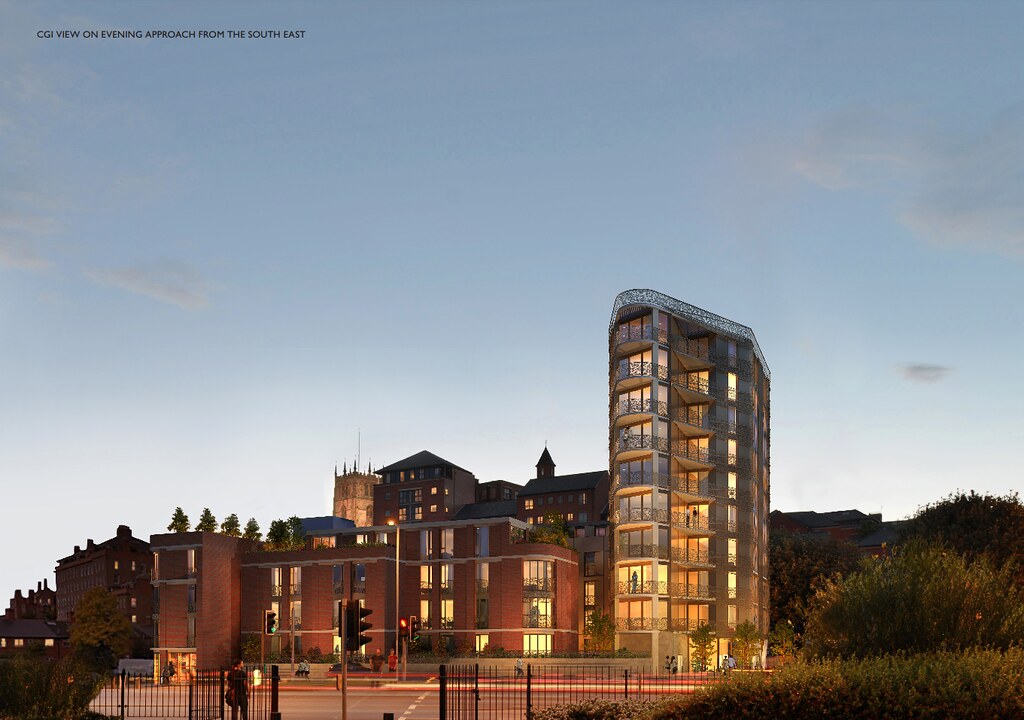 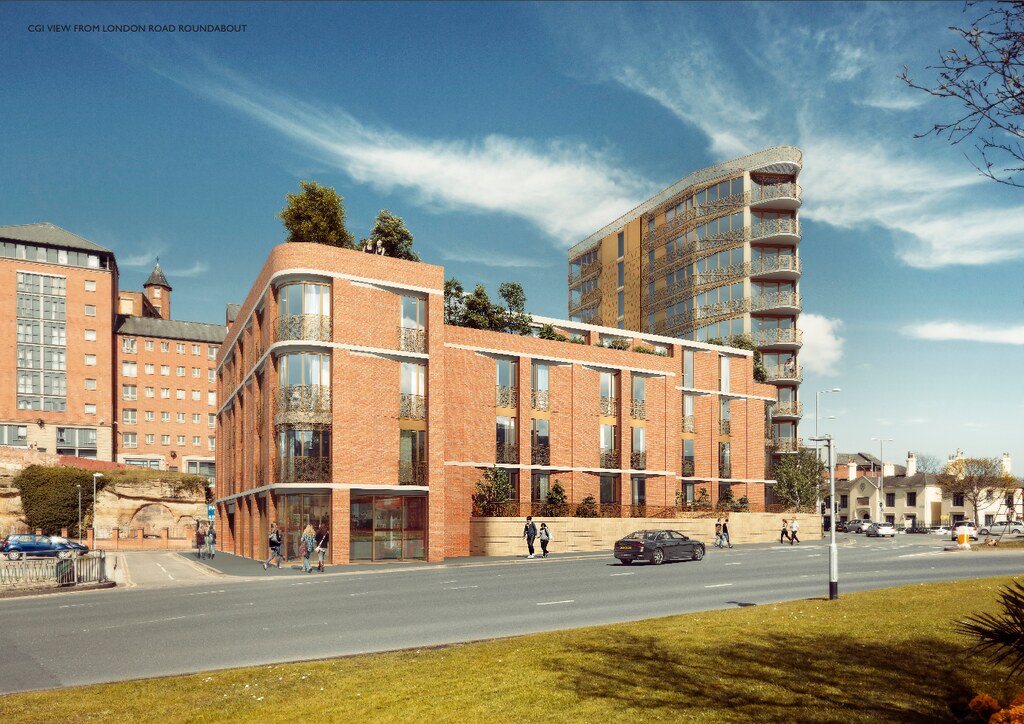 The developer has confirmed a spring 2018 start.