While much of the activity along The High Line has been concentrated along adjacent lots in the West 20s, work appears to be imminent at a long-vacant site between 17th and 18th Streets. Owned by Edison Properties, the property has seen several visions — and Curbed has renderings of an unbuilt two-towered configuration — though current plans have not been disclosed.

The Real Deal notes that 501 West 17th Street used to be home to a gas-processing plant, which explains why work on the project is beginning without any approved permits for future buildings. As a ‘brown’ site, the soil conditions must be remediated before new development can start, and it appears that the process is underway, with the former parking lot now reduced to dirt.

In the meantime, the lot will remain home to a billboard, which has hosted both advertisements and art pieces. Though permits are lacking for an actual building, new ones have been filed for illuminated signage, so it appears that the commercial art installation may be getting an upgrade before it is cleared to make way for eventual development.

Despite the lack of public plans, Edison’s HLP properties — which will be the division developing 501 West 17th Street — has noted that the project will be mixed-use. Completion is likely by the early 2020s.

That site at 76 11th Ave. is half of a large parking lot owned by Edison Properties stretching from 11th Avenue to the High Line between West 17th and West 18th streets. That portion can accommodate a 390-foot tall residential tower about 440,000 square feet in size, making it one of the largest development sites in that area up for grabs in recent years. Edison expects to sell the site for more than $400 million, sources say. The real estate and parking company would retain ownership of the other half of the parking lot abutting the High Line.

Ziel Feldman’s HFZ Capital Group is in contract to buy one of the most sought-after development sites in West Chelsea, The Real Deal has learned – a transaction worth somewhere in the neighborhood of $650 million.

The block-long property at 518 West 18th Street runs between 17th and 18th Streets from 10th Avenue to the West Side Highway and holds more than 760,000 square feet of development rights, paving the way for Feldman to construct one of the largest buildings in the neighborhood.

The sellers were Edison Properties and its equity partners. The deal works out to somewhere between $600 million and $700 million, a source said. “Our partners have encouraged us to capitalize on the foresight our chairman had over 30 years ago, and we agreed,” an Edison insider said. “We expect that Ziel will now build one of the most iconic buildings on New York’s skyline.”

CBRE’s Darcy Stacom brokered the transaction. Neither Feldman nor Stacom could be immediately reached for comment. The property, which for years was operated as a parking lot, sits like a fallow gold mine amid the neighborhood’s real estate riches. Edison, the New Jersey-based landlord that owns ancillary companies such as Edison Park Fast and Manhattan Mini Storage, has controlled the site since 1983 when it bought the property from Sol Goldman.

As real estate values in West Chelsea began skyrocketing, many in the development community were itching to take control of this site and others that Edison holds in the area, including a parking lot at the southeast corner of 20th Street and 10th Avenue. Feldman had offered to buy that property around two years ago when he was buying land to develop his 10-story condo building at 505 West 19th Street, sources said, but was rebuffed by Edison, which still operates it as a parking lot amid a growing forest of luxury developments. Feldman’s new site allows for hotel, office and residential uses.

He could construct a residential building larger than the 710-unit AVA Highline several blocks to the north, or a commercial building roughly four times the size of Barry Diller’s Frank Gehry-designed IAC Building next door.

Just to give an idea of what where dealing with, this is the AVA Highline. 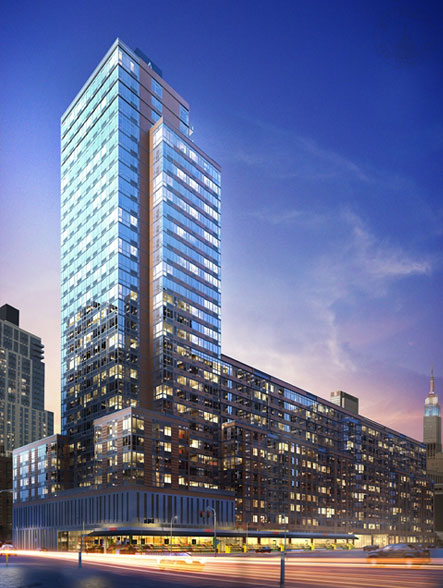 Being larger then this is pretty big for the neighborhood. Might be larger as a whole if they decide to go commercial, especially if its Class-A space, but if its residential, eclipsing the AVA will stun a couple of residents.

Older proposals for the site:

This Glassy Tower Could Have Risen by the High Line

Imagine if Frank Gehry's IAC Building weren't the only glassy structure to grace the intersection of Eleventh Avenue and 18th Street. Right now, it dominates that area, but Curbed dug up a... 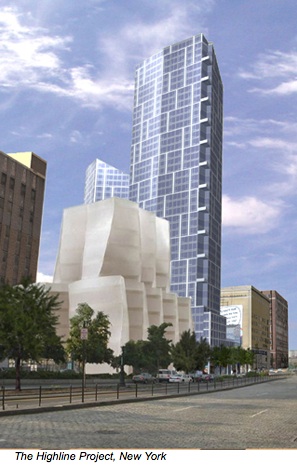 Feldman, whose company HFZ Capital is preparing to close on an $800 million deal to buy a whole square block development site in West Chelsea, said his plans for the property are inspired by One Beacon Court, the mixed-use tower often known as the Bloomberg Building at 151 E. 58th St.

The company is working on a concept for the site that would include a similar driveway-cum-courtyard as the one has become the defining characteristic of the 55-story Midtown tower, which was designed by architect Cesar Pelli and his son Rafael and has served as home to big name residents such as Flavio Briatore and Beyoncé.

The new “architecturally significant” 800,000-square-foot tower, which would occupy the block between 17th and 18th Sts. from 10th Ave. to the West Side Highway and could go as high as 400 feet, would include a retail component on the ground floors, a named brand hotel in the middle and condos up top, Feldman said of his plans, which are still provisional. It would be one of the tallest buildings in the neighborhood.

“We think this is the nicest piece of real estate in the city,” Feldman said, noting that the hotel concept would likely be similar to the one that Larry Silverstein employed with the Four Seasons hotel at 30 Park Place in Lower Manhattan.

Feldman is buying the site from longtime owners the Edison family, who operated the site as a parking lot.

The median price for a Chelsea condo is currently more than $4 million, or $2,212 per square foot, according to listings website CityRealty. But if Feldman’s tower truly has the same cachet at One Beacon Court, buyers could see prices drift as high as $6,000 a foot, sources said.

A penthouse at the Midtown building is currently on the market for a whopping $82 million. HFZ to replace hotel plan with office at Chelsea megaproject

Ziel Feldman’s HFZ Capital has tapped Alicia Goldstein, a former executive vice president at Faena Group, to be the company’s senior managing director and president of sales and marketing. The newly created position will see Goldstein, a veteran of the Related Companies, bring HFZ’s latest development, a mixed-use office, retail and residential project at 76 11th Avenue, to market. Goldstein was at Faena, the firm led by Argentinian developer Alan Faena and partner Len Blavatnik, for two years. During her short tenure, she spearheaded the company’s U.S. expansion, and launched sales at Faena House, a high-end condominium project in Miami Beach. The building’s penthouse recently sold for $60 million to billionaire hedge fund manager Kenneth Griffin. Feldman told The Real Deal that Goldstein “will help us with projects already underway, while positioning and bringing to market a variety of future developments including plans for 76 Eleventh Avenue where she’ll work closely with BIG, the architecture firm we’ve engaged to design the full block site.” Nir Meir, a principal at HFZ, noted how unusual it was for a company of HFZ’s size to bring such a significant name in marketing in-house. “Usually, these people represent developers on behalf of the big marketing firms like Elliman and Corcoran,” he said. “No one, except for the likes of Related, has really brought anyone of that caliber in-house.” Meir said HFZ, which will work with Elliman on the 11th Avenue project, has not yet decided if it will bring sales and marketing efforts entirely in-house in the future. Goldstein was formerly a senior vice president and the head of nationwide condo marketing for the Related Companies, where she worked on the Residences at Time Warner Center, the Brompton, Superior Ink and the Caledonia. She also marketed properties across the country, including Viceroy Snowmass and Snowmass Base Village in Colorado and the Century in Los Angeles. HFZ has been one of the most active developers in the city over the past year. Its residential pipeline also includes a 64-story, nearly 800-foot-tall condo tower at 8-16 West 30th Street in NoMad and a condominium conversion at the Belnord rental building, at 225 West 86th Street. - See more at: http://therealdeal.com/2016/01/11/755415/#sthash.QVXq0XX3.dpuf

Hell of an addition for the high line. 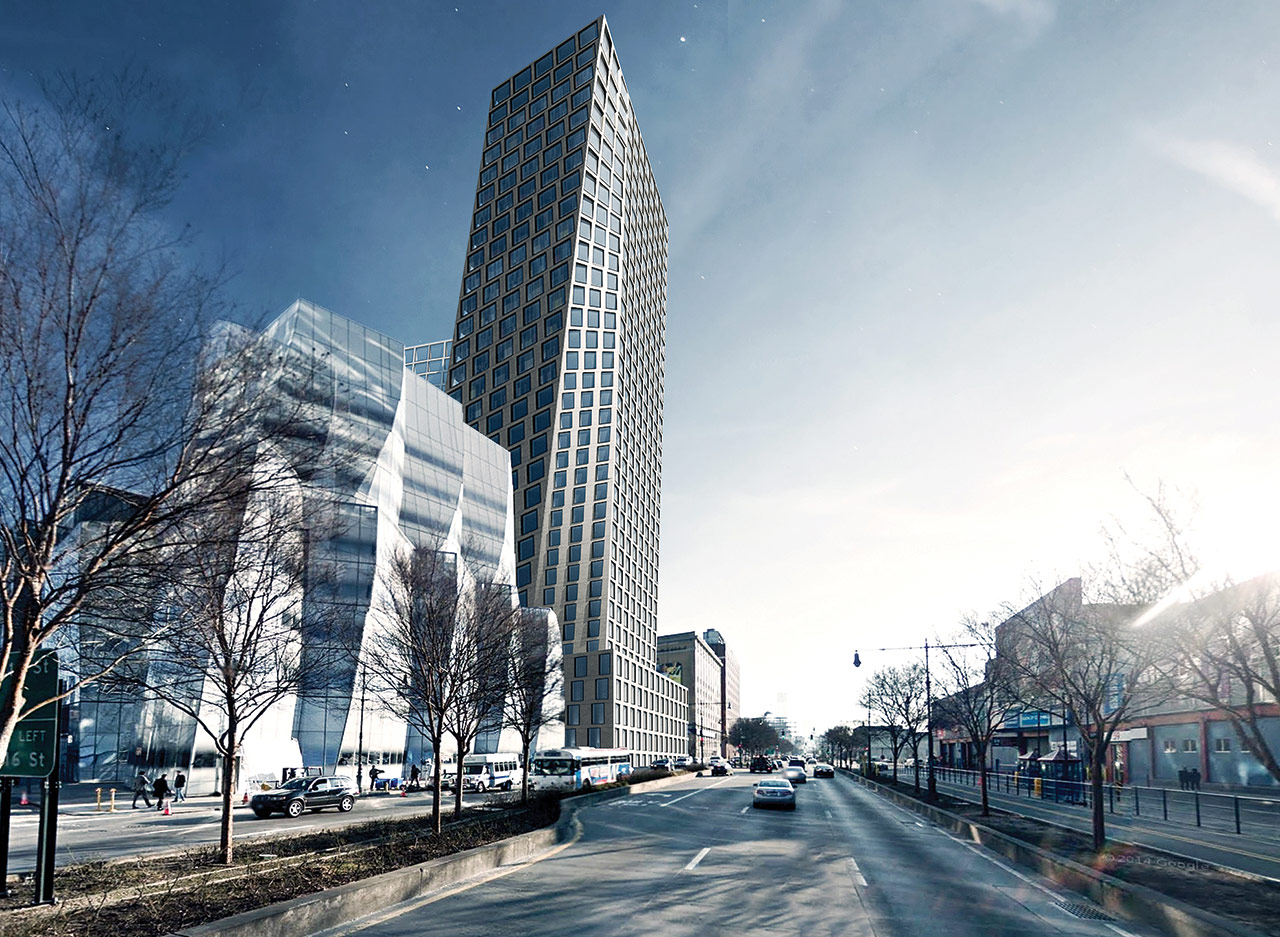 I just drove by. The lot is closed, and construction fencing is up.

A lot of permits have been filed recently!

We’re you there today, Tec?

I was. Photos later.

The DOB schematic at the site is nothing like BIG’s proposal.

Looking forward for some pics. Yea, I noticed that from the filings so not sure what to think about it.

Will your pics include the DOB on site?

I hope that the torqued design has not been abandoned. Ziel Friedman is a known cost cutter.

I am hoping those are just crude diagrams. Given the BIG renderings appeared in EB-5 materials, I am guessing they are close to or exactly what will be built, as the designs used in EB-5 generally approximate the final product.

I hope so. The BIG proposal is stunning.

However, Ziel is known for “developing” drek. I hoped that this and the 29th St tower were starting new chapters for him.