the age of Ramses continues. 74 floors? Has to be a supertall right, even if that is marketing floor heights

edit- just read the article, appears it will be 920, which will be huge for Brooklyn, and help fill the skyline with Dime tower. What I like about the development the most is it seems to designed to enhance the community. Projects like this increase the value of others in the area and will spur more development.

Awesome… Great base as well 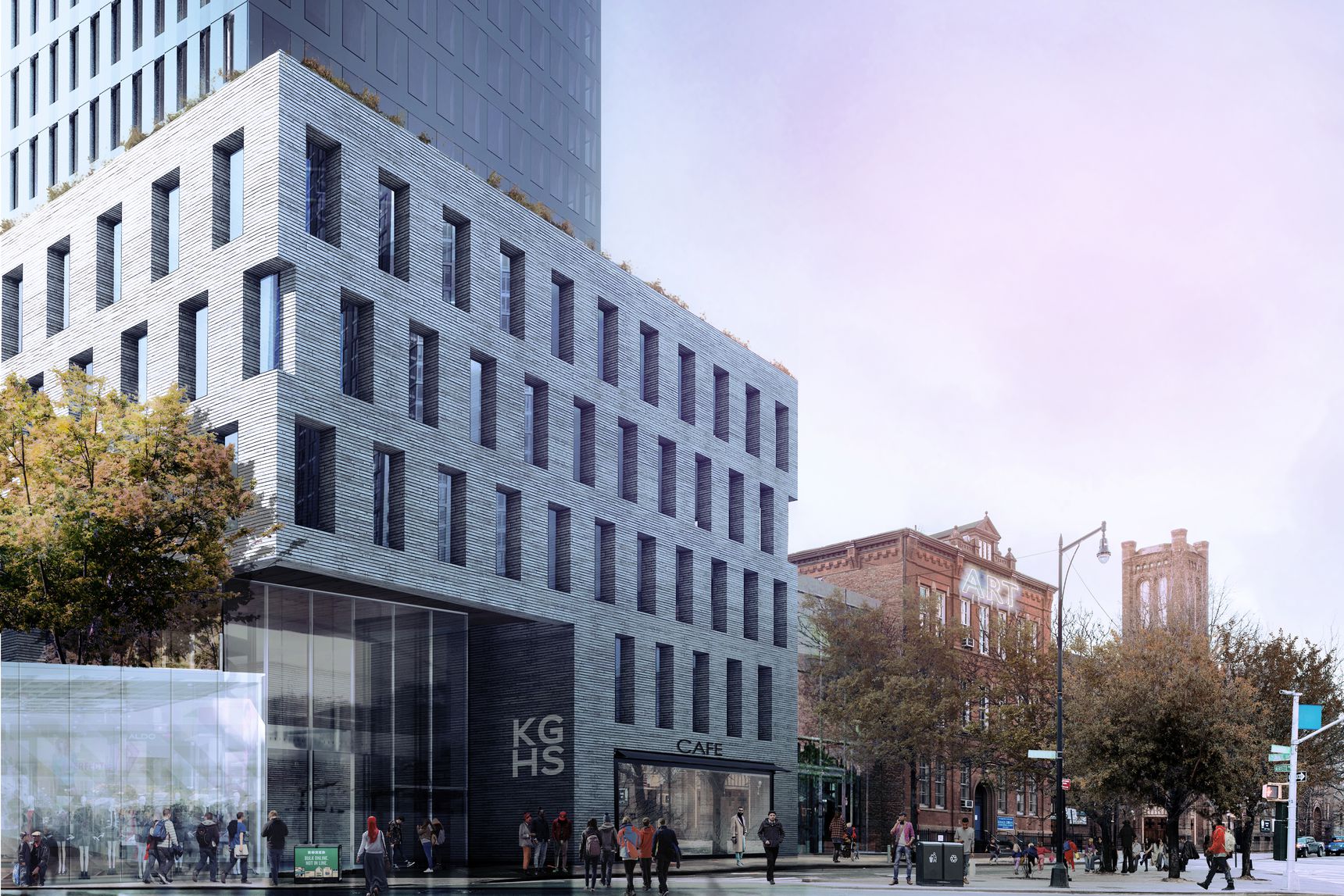 Wow. I like the design of the tower. It’s a bit on the cold and sterile side, but it’s just interesting and unique enough. The glassy amenity floors (I’m assuming that’s what they are) really break it up, in a good way. Nice. Alloy is a real estate development company working in New York City. We believe we have a responsibility to make the experience and quality of our work meaningful. I’ve long wondered how long the Flatbush side of that block would last.

While most of us are excited about the development of downtown Brooklyn and the Flatbush/ Schermerhorn corridor, this project is not contextual. It’s one thing for the developer to flat out push for a change in zoning that can be debated at the city council level, but it’s another for developers to try to cloak over-reach in “historic preservation.” The preservation of the two historic shells on 3rd Ave is not in the spirit of preservation. The developers should preserve the historic street wall on 3rd avenue in its entirety and develop the rest of the site. The massive commercial development should be on Schermerhorn and Flatbush (not what are essentially residential streets). State and 3rd Avenue cannot handle loading docks and commercial access for 40 and 75 story buildings, respectively. I think we need to keep these important urban planning principles in mind before we cheer development for the sake of development. This proposal can be significantly improved for the benefit of everyone.

There appear to be some financing issues with this project and hence the breaking it up into two different phases.

I walked by this area a couple days ago. 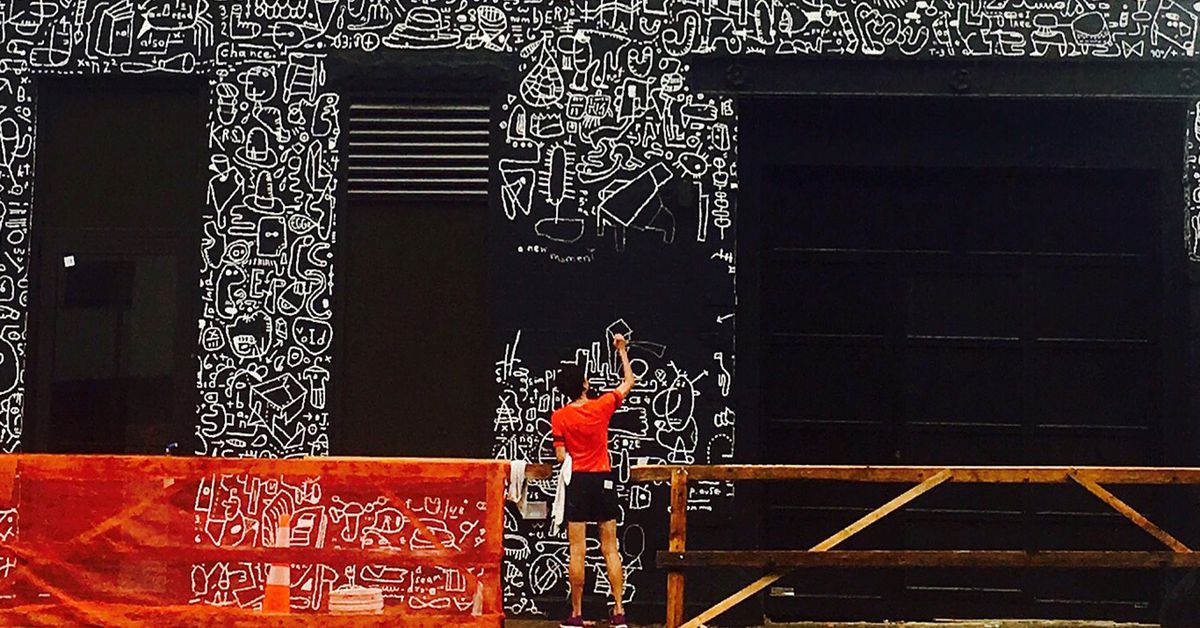 Gigantic mural on development site 80 Flatbush is a ‘living monument’ to...

Artist Katie Merz will bring a graffiti-inspired artwork to a nondescript Brooklyn corner. 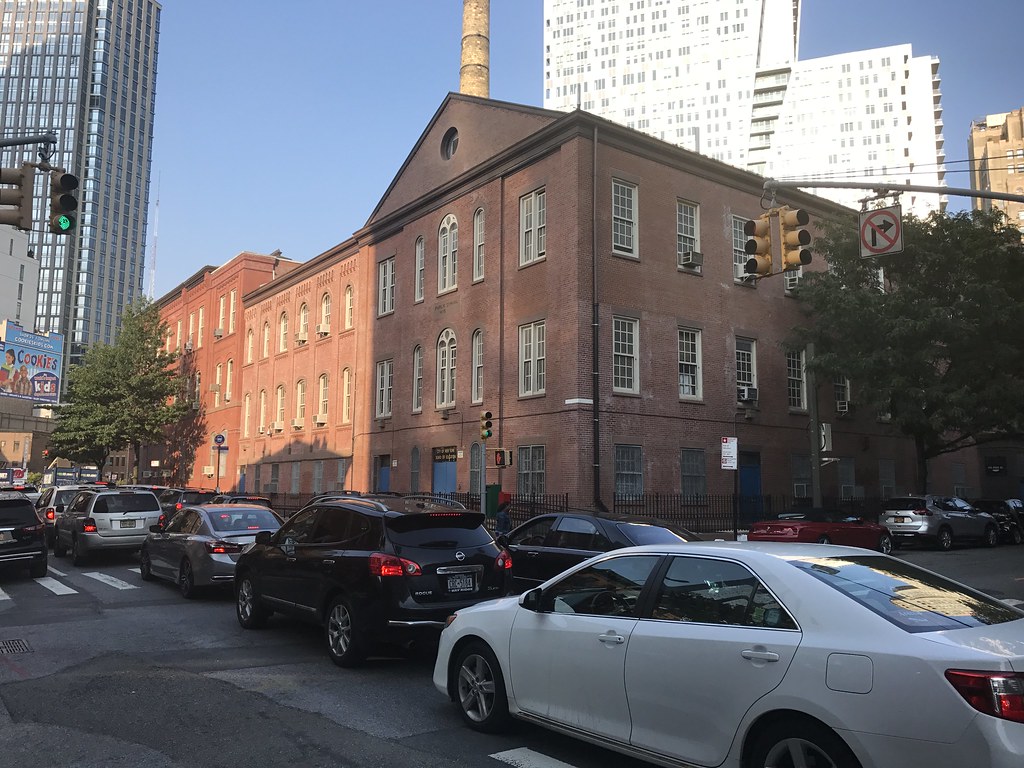 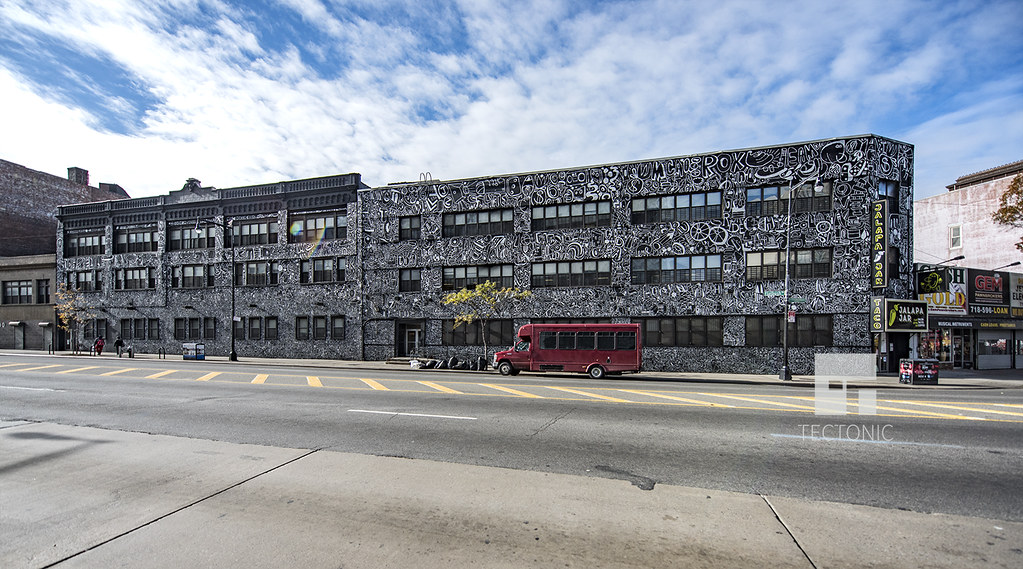 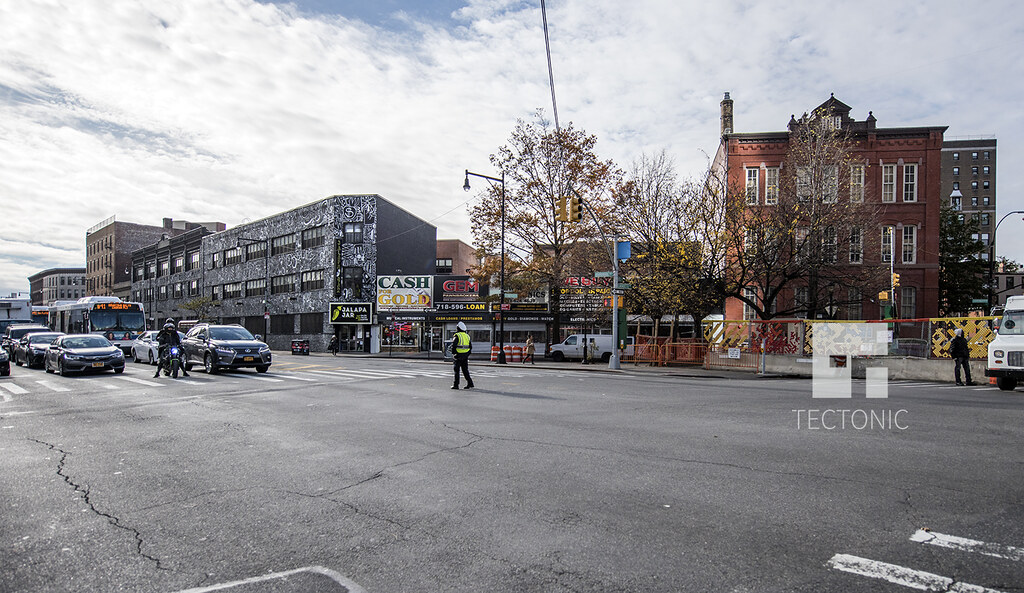 I definitely wouldn’t mind a more contextual redesign, but communities need to accept that extra height is one of the bigger incentives for affordable housing among luxury developments. Especially considering this site isn’t far from the center of downtown.

What most of the residents were certain of is that 74 stories, which is the height of the highest tower of the proposed pair, is too much. There is also the problem that the towers don’t fit in to the surrounding brownstone neighborhood, are too glassy, and cut off views of the Williamsburgh Savings Bank Tower across the street, aka 1 Hanson Place, they said.
[…]
At the end, the questions came back to the sheer size of the buildings, which many felt overshadowed some of the project’s other benefits.

When we last checked in on 80 Flatbush Avenue, the controversial development plan at the nexus of Boerum Hill, Fort Greene and Downtown Brooklyn, local residents were concerned that the 74-story tower — the highest of a pair — is too tall for the surrounding neighborhood.
[…]
a scheduled public hearing on the matter for February 13 has been postponed, we’ve been told, due to the environmental review not being completed on time.
[…]
It’s now expected that the City Planning Commission will certify the application at their review session on February 12.

CB2 is anticipating a new public hearing will be scheduled in early to mid March, although a date and location have not been confirmed.

At least this area has good transportation to support these towers.

@YIMBY is this an error? The post says the tower remains unchanged but the height is listed 986’ instead of 920’ 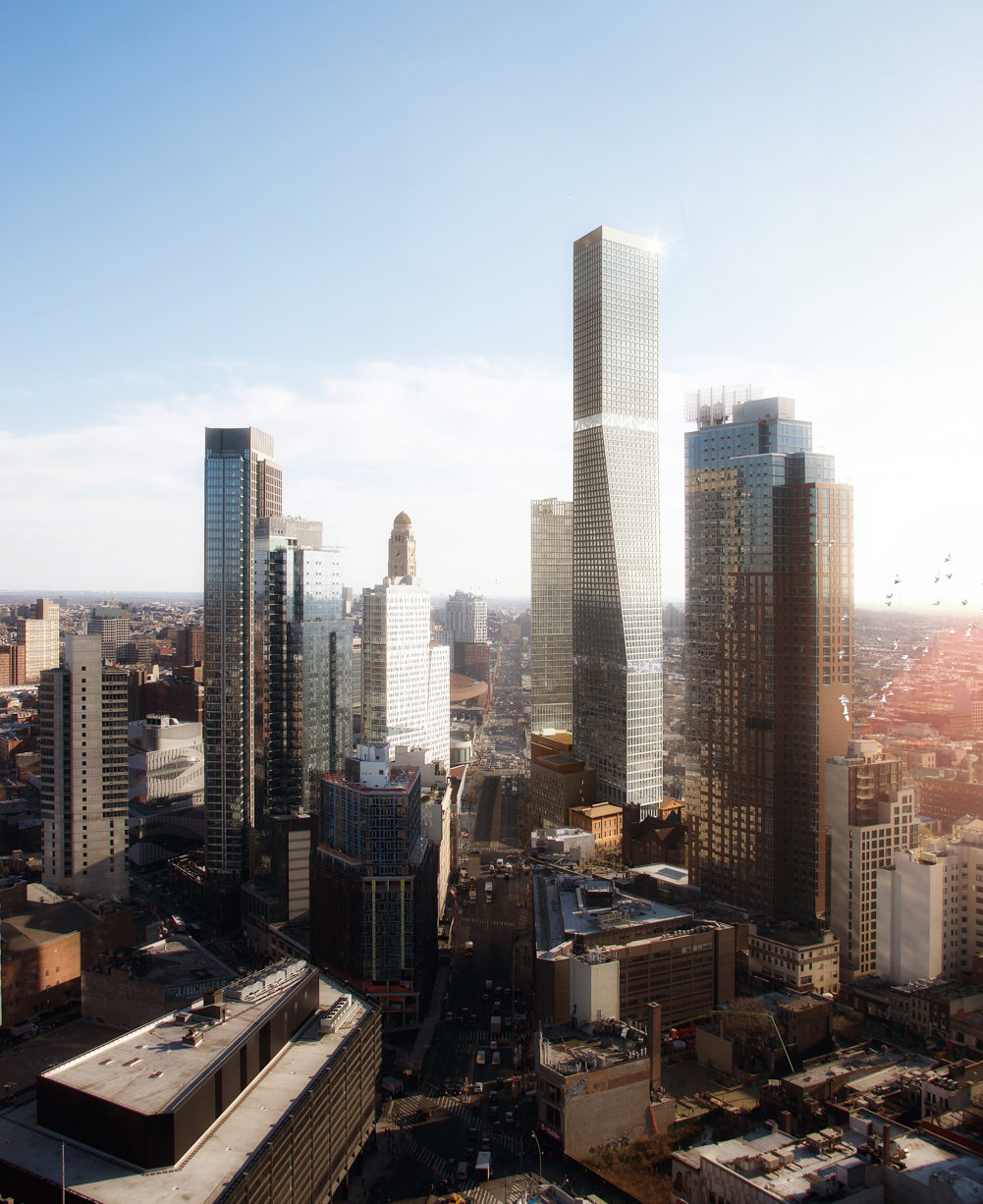 New information has been released about the 80 Flatbush project in Downtown Brooklyn, led by Alloy Developments. The release brings in new renderings...

The taller tower remains unchanged. It will rise 74 floors, peaking at 986 feet above street level.

I’m wondering that too. I hope its not an error!

Its almost to good to be true. 2 Brooklyn super talls? (9 dekalb and this).

It saids above street level. I was thinking maybe it was above “sea” level and the extra height due to elevation? IDK, but lets keep fingers crossed its not an error.

and I thought 300 Ashland was skinny…

if the renderings are anything to go by, phase one seems to have grown in height to above 500’ The Savings Bank Tower is 512’, and it’s closer in this angle.

I can’t seem to find any zoning documents for this or diagrams on the DOB. Recent filings would be quite useful to see if its the case. Either that or I’m using the wrong bin#.

I don’t think they’ve filed anything yet. I’m sure the outlets would have picked that up.

Fingers crossed for this! NIMBY’s be damned!
I do hope for a redesign though, I don’t want just a boring blass box right in front of one hanson place which is probs Brooklyn’s most stunning tower