I agree. It’s not like they’ll limit themselves below One WTC for many decades to come. And yeah I’d like to see a neo-futuristic or maybe a neo-art deco skyscraper as NYC’s highest. I’d even want to see Mackensen’s sky-high towers concept realized in New York City as a megatall or at least at a height of 1800 feet.

It’s also materials. I would love to see carbon fiber introduced to more projects. It’s super lightweight and really sturdy, and more importantly, not as expensive as that whole nanotube stuff.

How can such concepts become reality?

Imagine these two concepts standing in the direct neighborhood of Grand Central Station. One in postmodern and the other in neo art deco style with a possible height of 1350 feet . Would there still be enough air rights for that? since I think the zoning certainly makes it possible. 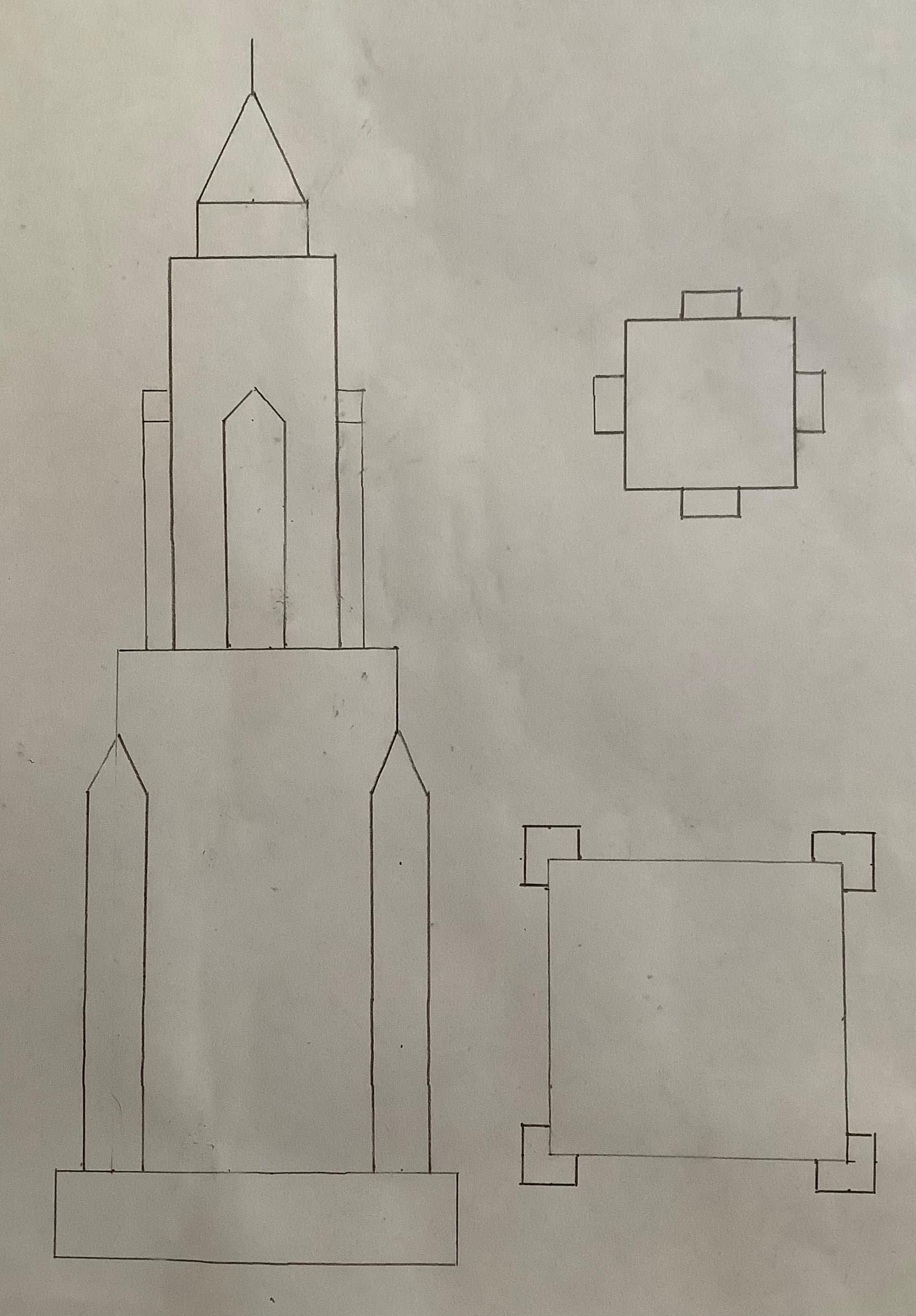 Sorry @rgarri4 for the screenshot, but Site 1 is a possible place for my Sky High.

May I ask which 2 concepts you’re speaking of? Do you mean the one at 237 Park Ave and yours at 45 45th St? Sorry for not understanding.

1350’ seems logical on both aforementioned sites though

. As for your sky high proposal, did you mean actually Site 4 or Site 1? PABT Site 4 is the tower visible at the forefront on rgarri4’s model.

Is one of these projects possible?

As mentioned multiple times, these are just personal concepts by @Mackensen, and they’re not actual proposals

It’s really a shame but well…

Where exactly in New York would be the perfect location for the new MSG 5? Or would it make more sense to modernize the old one? 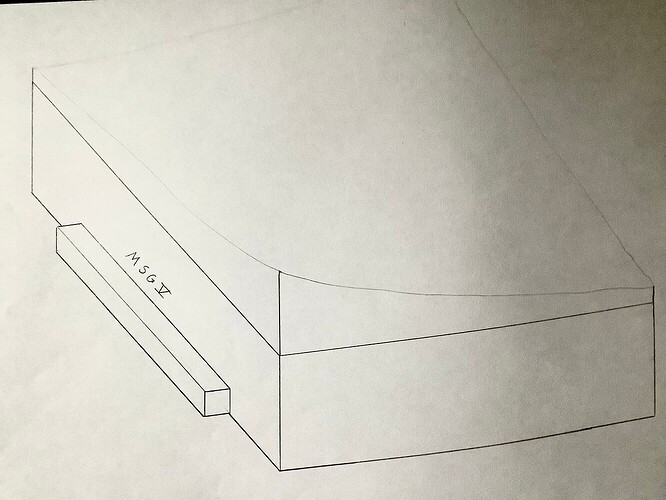 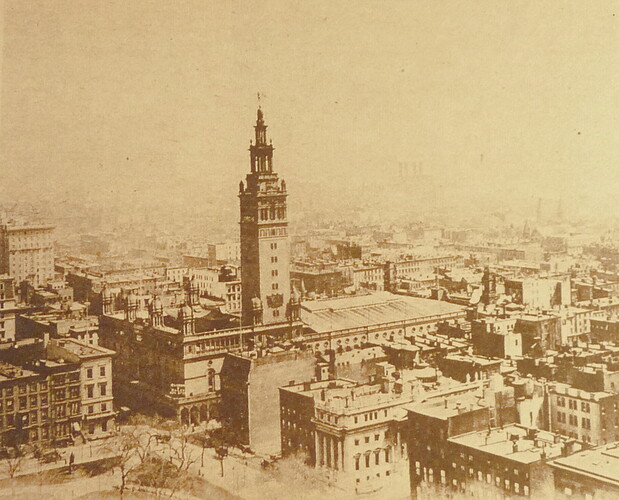 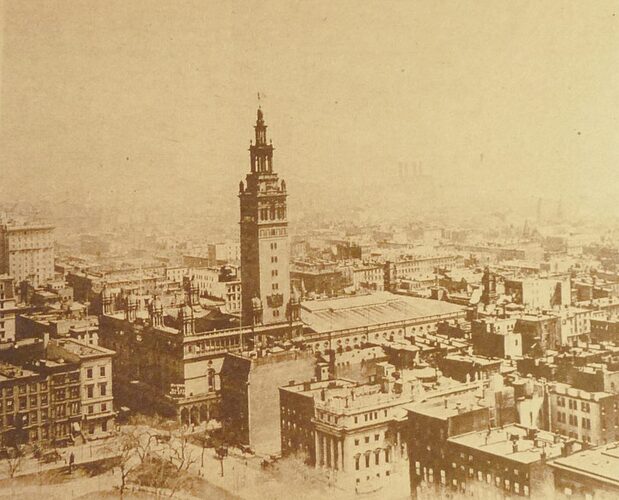 The New York Daily News used to run a feature where they compared an old photograph of New York with a modern view. Here is Madison Square in 1903 and 1958.

The new MSG with supertall potential

@mackensen That’s a difficult question to answer, because where it is right now is a perfect location with multiple options for immediate access to mass transit, multiple subway lines/LIRR/Amtrak/busses.

It wouldn’t be feasible to rebuild it where it is if rebuilt because sports teams that use the venue would need somewhere to go while it is being rebuilt, and the loss of revenue for the years it would take would be astronomical. But the outside can always be updated without stopping service.

There are few other centralized locations available in the overall city with mass transit options that rival it’s current location. People want to suggest moving it to HY Phase II or on the waterfront but aren’t seeing that the 7 Line 34th St-HY stop is not adequate enough for transportation to and from the arena.

But you have 2 different question, since you’re asking if it can be modernized or rebuilt with a supertall component you could still do both, though I wouldn’t call the tower a supertall (although it was the 2nd tallest thing in the city when built) it was just a bell tower. But there isn’t necessarily room on the current Iocation to support a supertall.

Thank you TKDV for your detailed and informative answer.

These are just a few pictures of MSG 2. When the Garden was completed in 1890 it had the tallest sigthseeing tower in New York. The tower had seven floors (private apartments and other private rooms) and in addition one or two floors skydecks. The walls of the tower were very thick (Cage construction) two elevators carried visitors up to the skydeck. 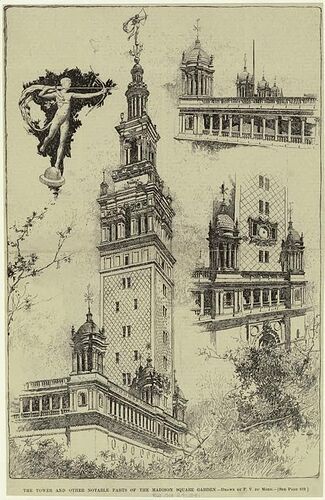 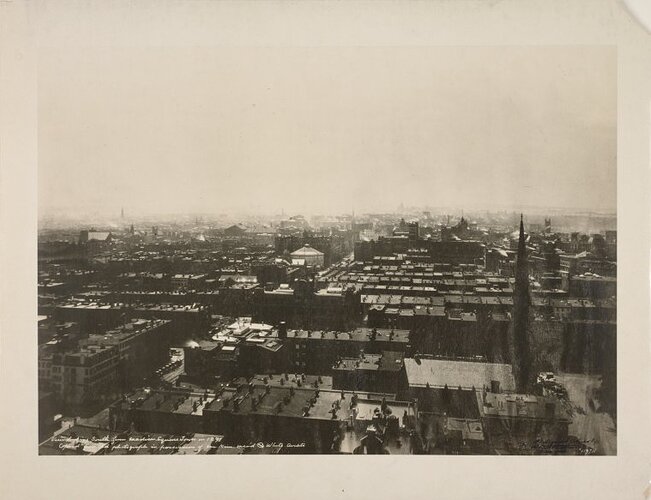 One of hundreds of thousands of free digital items from The New York Public Library.

Madison Square went bankrupt in 1925 so they had to sell the property and soon after demolition began.

This was only a small excerpt nothing more.

So it would be more likely that MSG 4 could be renovated than demolished. Or could it be rebuilt slightly offset in the ESC area when the new Penn Station is built?

I could also imagine that near the new PABT redevelopment is a good place? You can build a new one and use the old one until the new one is ready.

I do not understand the thread. “Sky High Tower”

@007 Yet, you’re the one advocating for it to be built all over the forums and asking if it’s possible to build, and you dont understand the thread? Right…

This thread is obviously a creative outlet for Mackensen to share her creative ideas and information from her background as a historian, just like mcart has his development list thread, and XingLin has his render thread, and I think TK2000 has a Philly thread for their sketchup model. They’re all just threads for the members to share their ideas/work.

MSG 1 was the first MSG and existed previously on the same site as MSG 2 (the one with the bell tower). That iteration was then demolished and replaced with the New York Life Building. MSG then moved to a location where the current One Worldwide Plaza is in Hell’s Kitchen and built their 3rd iteration, before it finally moved again and came to be where it currently is atop the old Pennsylvania Station headhouse/concourse. MSG 5 doesn’t exist.

@Mackensen from my point and understanding of the situation, yes, it would be much more likely that it got a facelift than for it to be demolished/rebuilt or demolished/built somewhere else, just because the cost to do that has been calculated to be around $8 billion. What do you mean when you say offset though, like in the same general area but not where it currently is? Some plans called for it to be moved next to the current PABT location, but there’s not really any lots where it could go, because the plans had it where the current PABT redevelopment plan is.

What is proposed must also be built.

But the simple drawing said MSG V ?
It is more beautiful in the street view as a 3-D model.

That’s definitely not correct, because hundreds of thousands of projects have been proposed and were not built.

Yes, Mackensen’s drawings depict a MSG 5, but the overall concept of a new MSG does not officially exist.

This thread is obviously a creative outlet for Mackensen to share her creative ideas and information from her background as a historian, just like mcart has his development list thread, and XingLin has his render thread, and I think TK2000 has a Philly thread for their sketchup model. They’re all just threads for the members to share their ideas/work.

Not to mention me as well since I have my fictional Midtown Minecraft city in the gaming thread lol.

What is proposed must also be built.

Well, you do realize that not every proposed building gets built. Take a look at Dubai and China for example. Also, the sky high towers is not a actual proposal. I mean you looking right at it, it clearly says it in the thread that it’s a concept (well a personal concept).