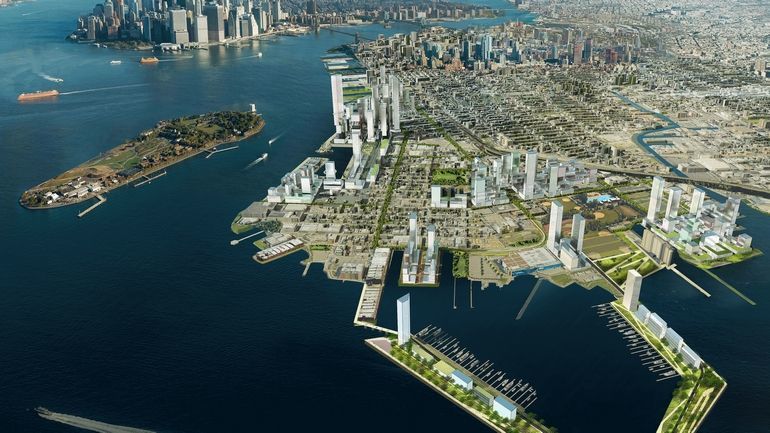 One of the city’s largest construction and engineering firms is floating a plan to transform a huge swath of the Red Hook waterfront into a residential neighborhood with a new subway connection, acres of parkland and waterfront-flood protections that would revitalize and protect the low-lying neighborhood from storms and future sea-level rise.

AECOM envisions building as many as 45,000 units of housing, much of it in new residential towers that would rise on underutilized Brooklyn sites owned by the Port Authority of New York and New Jersey and the city. The company plans to unveil the proposal Tuesday at the NYU Rudin Center for Transportation. Under the preliminary plan, proceeds from the sale or long-term lease of the land to developers, as well as other funds generated from revenue streams such as real estate taxes, would go toward upgrading the neighborhood’s infrastructure, which includes extending the No. 1 train from lower Manhattan via a new tunnel under the harbor to the Brooklyn area. AECOM’s plan also involves creating three new subway stations, one at Atlantic Basin next to the container terminal, another at the Red Hook Houses, one of Brooklyn’s largest public-housing complexes, and a No. 1 train station that would connect to the F and G subway lines at Fourth Avenue.

“We have to recognize that growth is necessary to create a waterfront that people can use, affordable housing and a mass-transit connection to a neighborhood where one doesn’t exist,” said Chris Ward, a senior vice president at AECOM and a former top executive at the Port Authority, who helped craft the plan.

If the project comes to fruition, a new residential neighborhood almost double the size of Battery Park City and several times as large as Hudson Yards on Manhattan’s far West Side—the biggest development project currently underway in the city—would be created.

The plan calls for constructing more than a dozen towers that would contain as many as 45,000 apartments, a quarter of which would be set aside for affordable housing. The new towers would sit on multiple sites: two adjacent waterfront compounds, the 80-acre Red Hook Container Terminal owned by the Port Authority of New York and New Jersey, a similar-sized adjacent parcel of city-owned waterfront along Columbia Street, the southern edge of the neighborhood overlooking the Gowanus Bay and unused land located at Red Hook Houses. Development at the public-housing complex could fund improvements to Red Hook Houses, AECOM said, but it is also likely to be controversial. Recent proposals to create additional residential space in public-housing has prompted outcry from residents and local officials.

“As the city expects another million residents in the next decade where will they all live?” Ward said. “This is a canvas where we can create tens of thousands of housing units without pushing people further to the periphery of the city.”

AECOM acknowledges that its plan lacks key details, including how much the development and infrastructure would cost, how much revenue it would generate and how to coordinate a neighborhood-wide redevelopment on land parcels that are controlled by several different stakeholders with potentially varying objectives. But the company outlined three different scenarios for the Red Hook project. Two of the cases would provide funding for a subway extension to varying degrees, however, AECOM acknowledged that other funding sources would be necessary.

The firm predicted that the creation of 25 million square feet of new residential space would be enough to fund 2.5 miles of waterfront protection measures, 6,250 affordable housing units, and generate $50 million of annual tax revenue for the city, but not enough to pay for a subway-line extension. A 35 million-square-foot residential development would finance 4.5 miles of coastal protection (enough to protect the entire Red Hook waterfront), 3 miles of streetscape improvements, 50 acres of new park space and create 8,750 affordable housing units. A project of that size would generate $90 million of revenue for the city and would partially pay for a subway extension. While a 45 million-square-foot project would create 11,250 units of affordable housing and the same level of coastal protection and fund 5.7 miles of streetscape improvements, 100 acres of new park space and would fund the bulk of a subway extension. This scenario would generate $130 million in annual revenue for the city.

“This is meant to be a starting point for a conversation,” Ward said, who estimated the cost of a No.1 train station extension at about $3 billion. 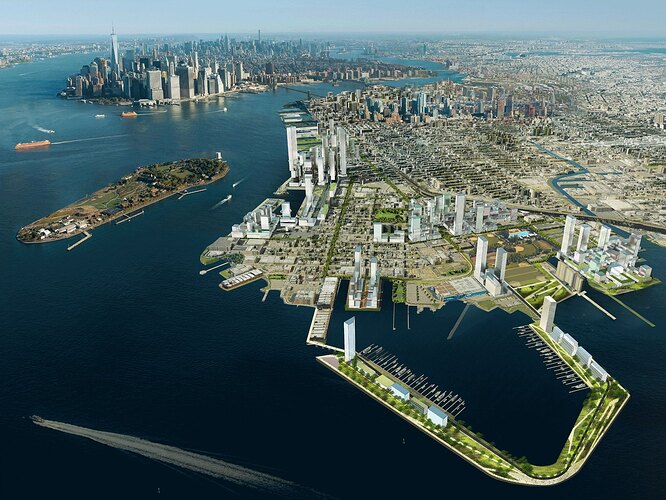 Use this map as a reference 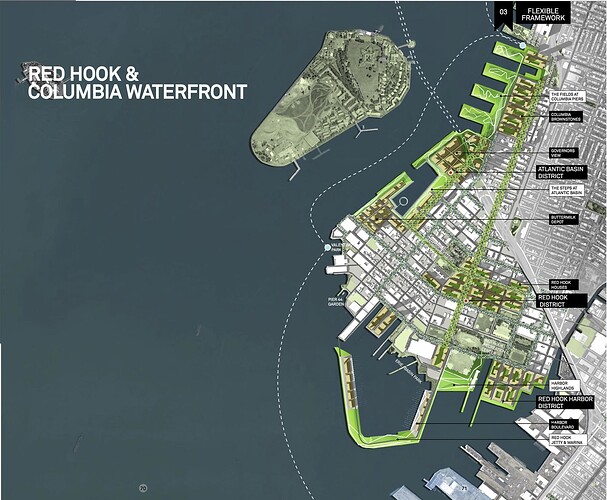 From North to South

The Fields at Columbia Piers 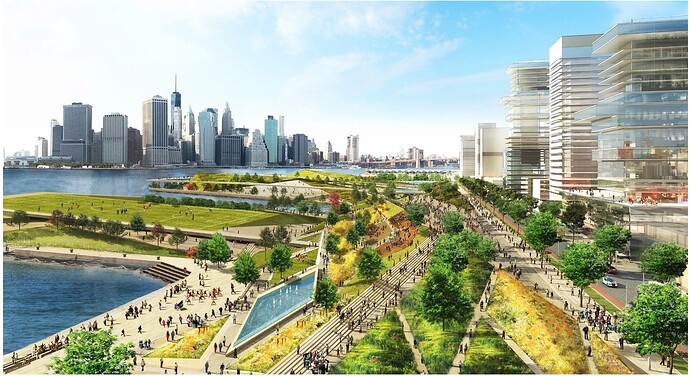 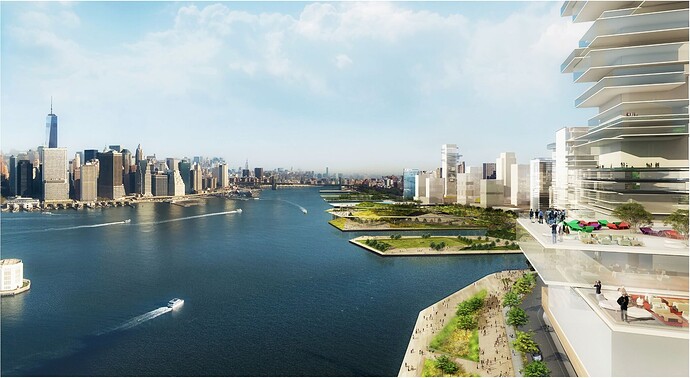 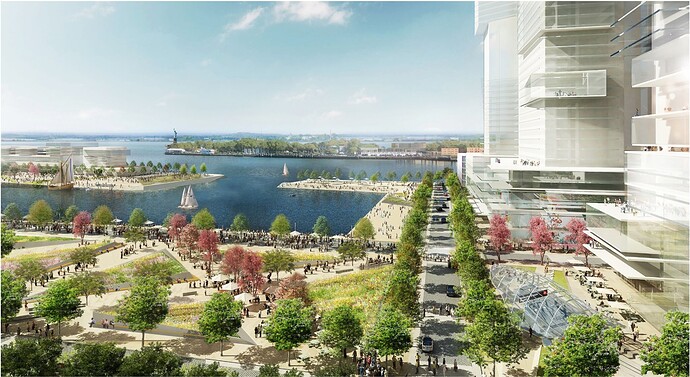 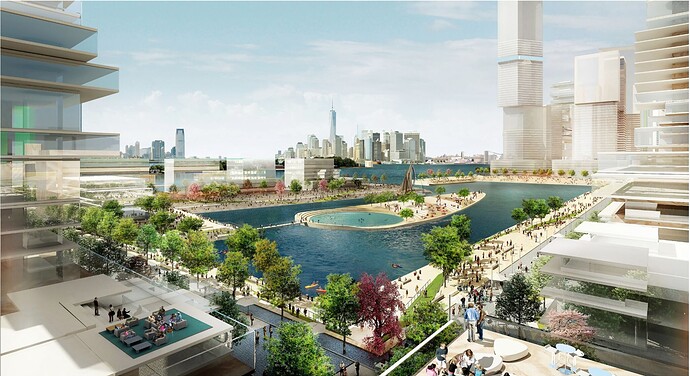 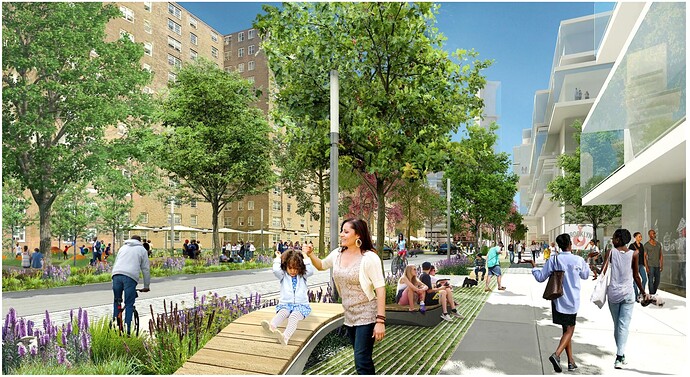 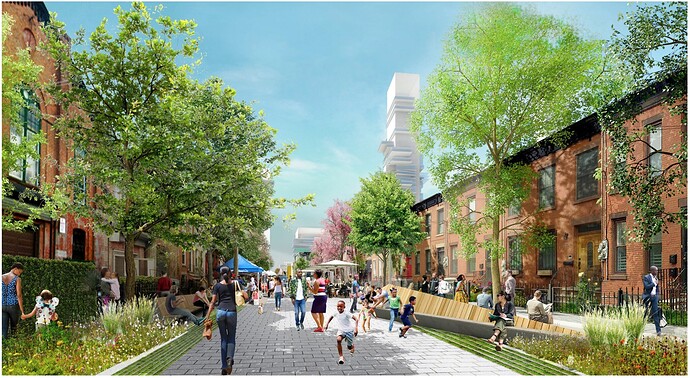 Extension of the 1 train + 3 new Stations 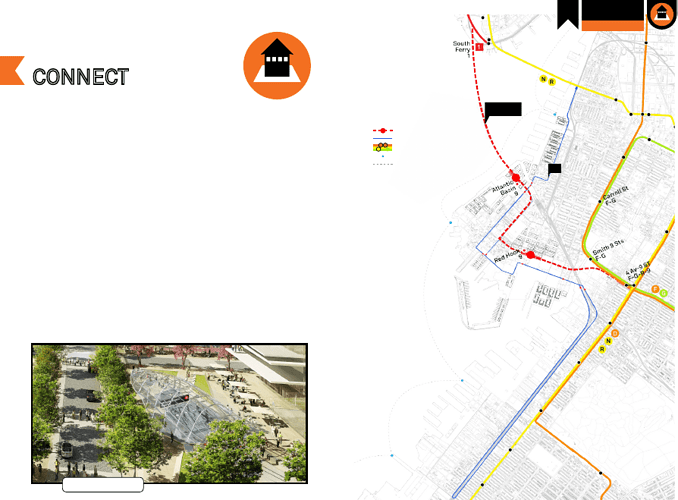 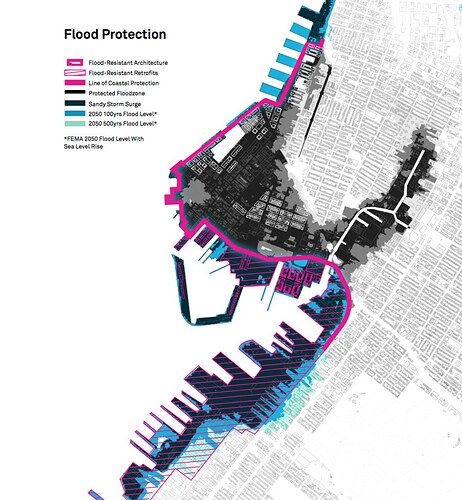 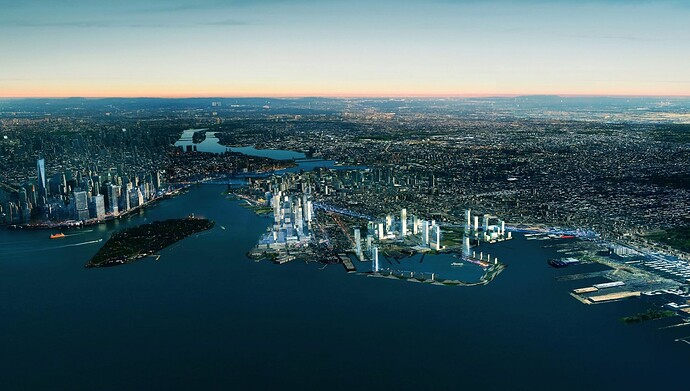 Cuomo will push for an MTA study for a subway extension from Manhattan to Red Hook in his state of state speech. 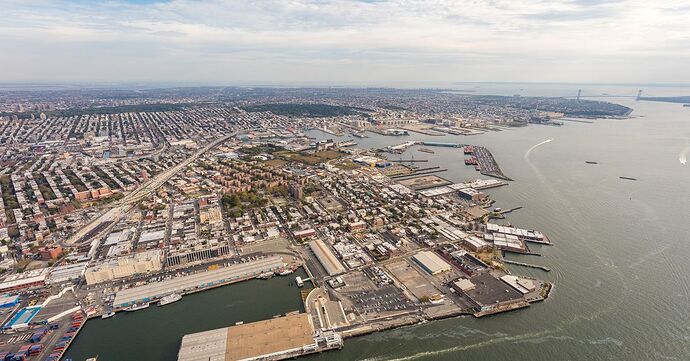 The governor will offer up more details on this proposal at his state of the state speech.

On May 9, NYCEDC announced plans to award a long-term lease of the South Brooklyn Marine Terminal (SBMT) to Red Hook Terminals and Industry City. The partnership will transform 65 acres at SBMT into a cluster of industrial maritime activity.

With a long-term lease through 2054, SSBMT will reactivate 64.5 acres of the terminal, moving over 900,000 metric tons of material annually through the port and eliminating over 11,000 truck trips a year.

Specific new uses for the facility include waste paper recycling and export, the importation of lumber, salt, and aggregate material, container-on barge-operations, roro and project cargo, among other activity that will support local businesses, New York Harbor and the regional waterfront.

The SSBMT partnership will grow the number of on-site permanent jobs to more than 1,000 over the lease term, adding hundreds of new positions within the first five years. 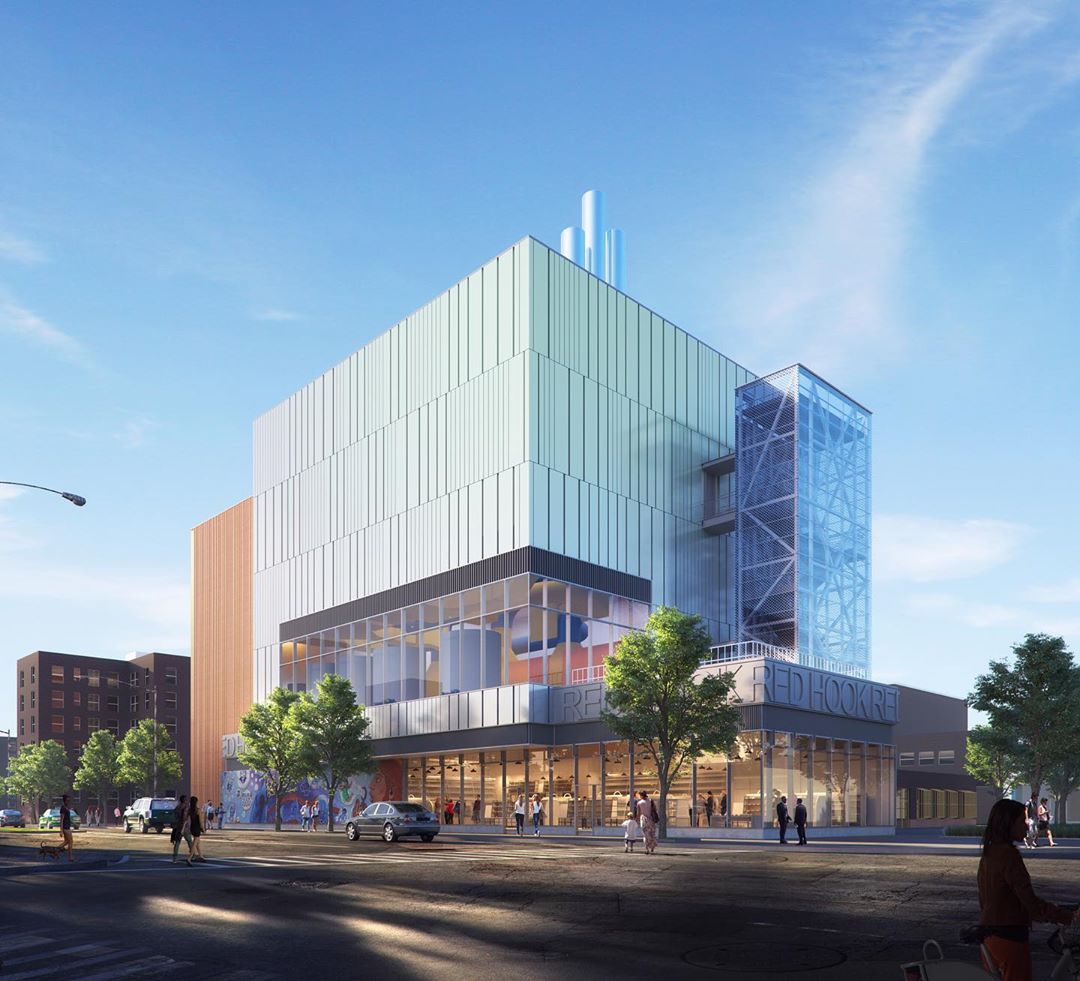 Any news? As far as I know there’s nothing stopping this, is it just the size of the project making it take a while?

Possibly. With the Gowanus Canal looking to be Brooklyn’s answer to the High Line, and Downtown Brooklyn shaping up well with 80 Flatbush, Brooklyn Tower and such, you need a massive waterfront development to create that Lower Manhattan effect across the river, and give the skyline a cross-river presence. All you’d need is this Lower Manhattan plan to create a nice river canyon and you’re set! And put Smith and 9th Street Station underground why dontcha! 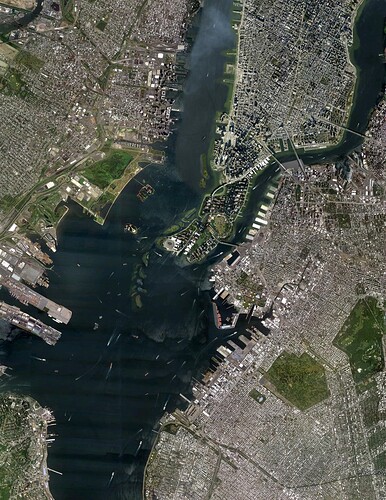 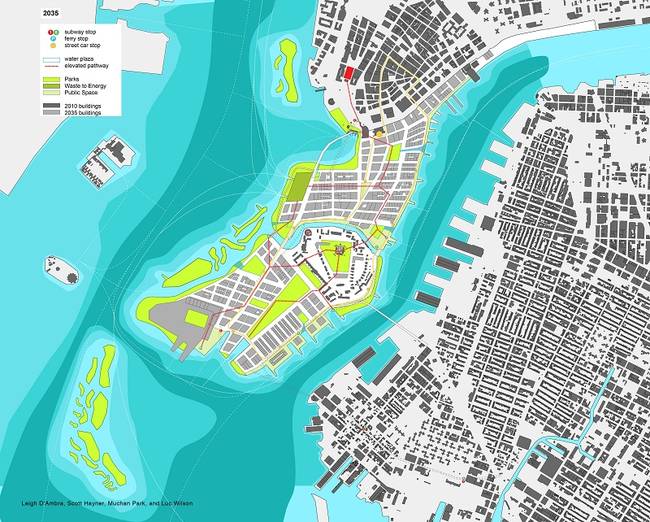 Red Hook has the absolute potential to become the next Williamsburg. This place is PRIME for development. It has that “village” feeling, as seen by the cobblestone roads and low rise homes. Hopefully some towers can be built along the waterfront and more low rise development throughout the neighborhood - just how they did Williamsburg.

Oh, and a subway extension? If that’s possible? Idk.

Get that Greenpoint landing type of development going on. 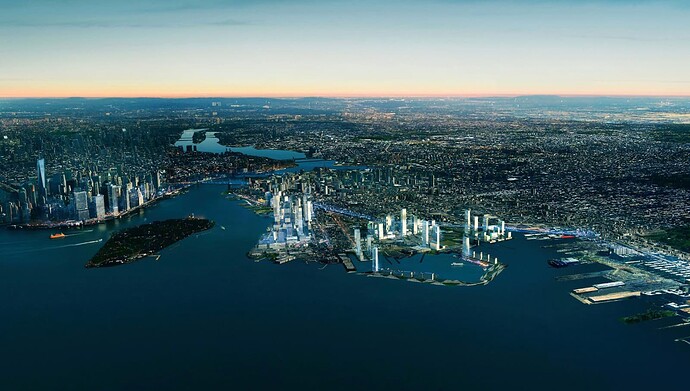 Lol I was just looking through this PDF pertaining to the photo you linked… http://www.aecom.com/swbrooklyn/wp-content/uploads/2016/09/SW-Brooklyn-Study.pdf.

Again, it’s another NIMBY community. So I doubt a project of that scale would be developed, but they’re very slowly developing the area. (Just how Williamsburg was developed - slowly over the years.)

Maybe but I would really love for it to come true. Huge new waterfront communities, get our own little Miami kinda thing going on down here. (Not that we don’t have that, but bigger)

@mcart Just looked up on this. The same councilman who denied the Industry City rezoning is in control of the Red Hook area. The waterfront area (and a good chunk of inland) is zoned industry. There have been attempts to change the zoning to residential for high rise apartments, but these have been blocked.

My question is. Why do we need an industrial waterfront?

NYC lost the industrial waterfront to Jersey decades ago. Let them have it and turn this area into high rise residential.

Besides some plots to wind turbine manufactur and maintenance, I know BK and Staten are doing some of that. But that’s a tiny portion of the space.

It would be nice to have both sides of the East River between Lower Manhattan and Red Hook have massive skyscrapers. Almost like a supersized version of the Chicago River. 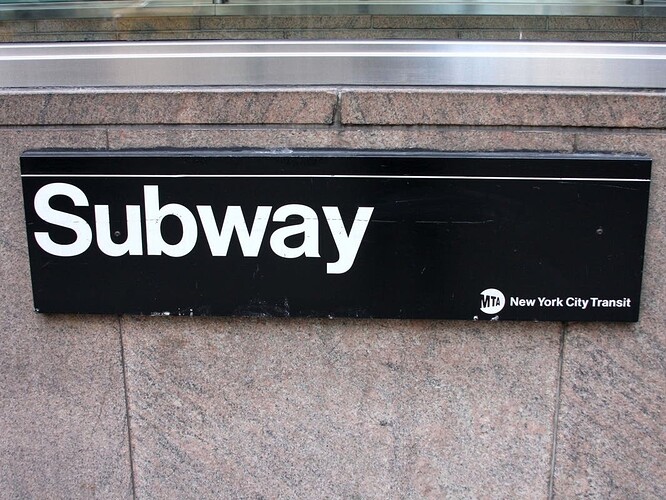 The MTA is considering extending the W line from lower Manhattan along the Brooklyn waterfront, possibly linking Red Hook and Park Slope.