Hmm maybe. I wonder if those 2 Bridges 700 fters are twins? I don’t remember their design exactly bu they looked similar

Even if now my Sky High Topic and the PABT here are similar then it has only the reason that I plan my concept here. 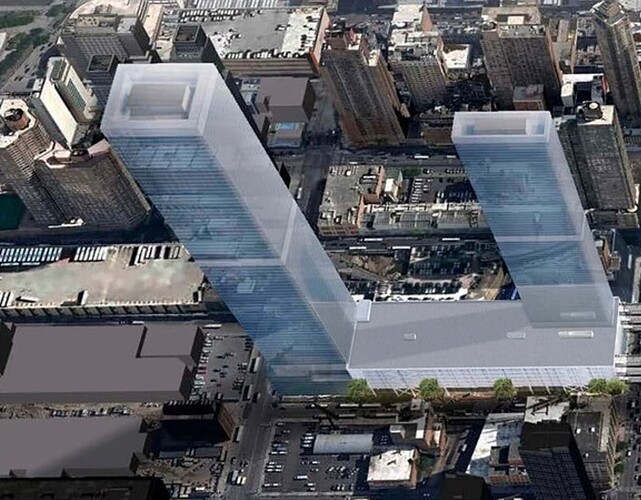 But my question about Site 1 and 2 is a different one and that is: 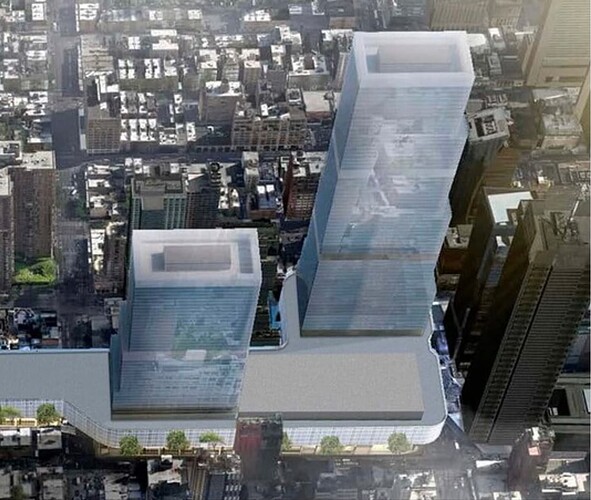 The old McGraw-Hill Building is in this vicinity. How might this impact Site 1, and specifically to allow this to be narrower and possibly taller? 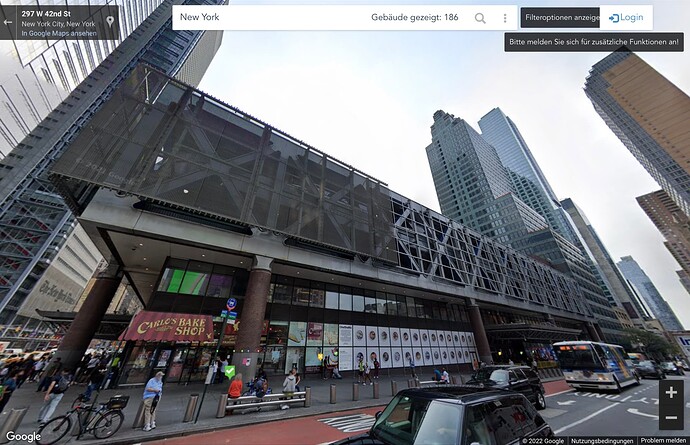 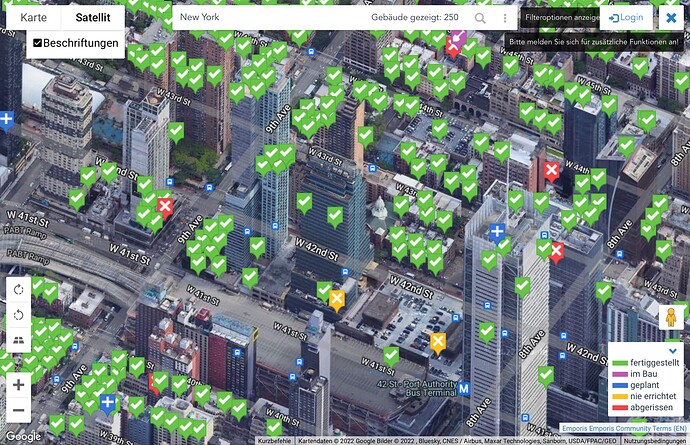 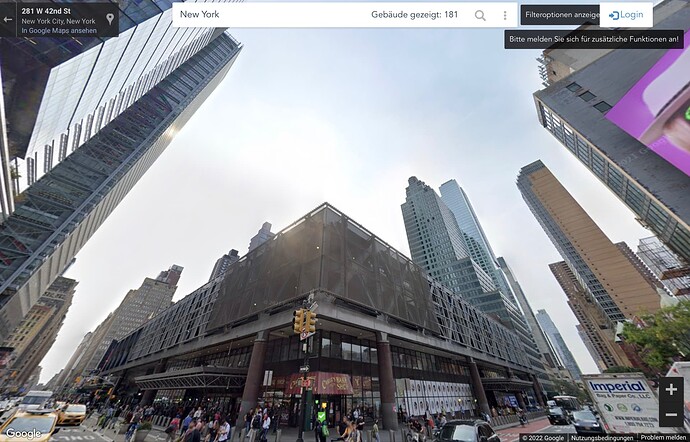 And one more thing: Is it likely that only 2 very tall buildings (over 1900 feet) can be built on the entire site?

@NewYorkCity76 Thank you, I’m certain when final figures are released they may stand out more through form and possibly height. The Empire Station Complex towers would fill in the area immediately to the right of the Site 1 tower in the 2nd picture.

But as it relates to your later comment, this development “will” intersect with the Hudson Yards special district, it just won’t interact with Manhattan West nor the ESC. The area between 9th & 10th Ave and 34th & 39th St (besides development to cover/span over the winding tunnels and roads that lead to the Lincoln Tunnel with parks) is not planned to have any major towers developed, just little low/midrise developments sprinkled here and there because that is all zoning allows for in that area. So the kind of barren view between the 2 middle towers of the PABT development with Manhattan West dead center will essentially remain as such on my 2nd render.

Ah, now that’s interesting. I kinda wish that the area between 9th & 10th Avenue and 34th & 39th street are filled with high rise towers/skyscrapers to fill in the gap. But now that you mention it, I think I meant to say that it’ll be like a whole new city since this enormous project will form a somewhat U-shape connecting this to Hudson Yards to Manhattan West and to the ESC.

Yeah, it is early to determine the exact designs, but I’ll be surprised if the twins are actually implemented as final design, and as you mentioned before MCart, that anything could change anytime

I think @TKDV has more knowledge of this site than me, but considering there’s no height limit I think it’s possible to have a supertall taller than One WTC, or even a megatall.

Any building can be narrower/taller or wider/shorter, but that is based on zoning code requirements, an existing building outside of the development boundary wouldn’t have any affect on a proposed building inside the boundary. For commercial buildings in NY you are trying to capitalize on the area of each floor, Site 1 definitely won’t be any slimmer because of this. As for the height, even if it was zoned for 4 million sqft, it would need a lot of vanity height to reach 1900’.

The chances of only 2 giant towers being built instead of the planned 4 is highly unlikely, practically none. The current layout of the towers coordinates with the footprint of the low-lying terminal buildings to not interupt service paths/roads/ramps and corridors within the terminal, changing the footprints of the building to be larger would result in interupting these items.

@mcart I understand it was just a thought, but I would abandon the idea of twins, as it’s very unlikely, similar to what ThreeWentDown mentioned, even though they are just massings they are still representative of factors as it relates to calculating building proportions, Tower 1 and 4 are very different. The idea of fraternal twins is interesting and I like it, but not twins in that they would be identical.

@NewYorkCity76 Thanks for expanding on that, even if that particular area wont be getting any tall developments, its getting some much needed greenspace!

When could we see the first renderings of site 3 and 4? Could there also be an architect competition?

I don’t think there will be any competitions for the towers, Since the towers will be commissioned by private developers, they will most likely just onboard whichever firm they’d like to work with, and if they choose to see options from multiple architecture firms we may never see all the designs as is typical with a number of projects as that’s at the discretion of the developer to release materials.

All that being said, we won’t see anything for sometime after a developer comes on board as we still have to wait for the developer. It makes the most sense for a private developer to develop all 4 towers, similar to how Vornado is overseeing a portion of the Empire Station Complex. 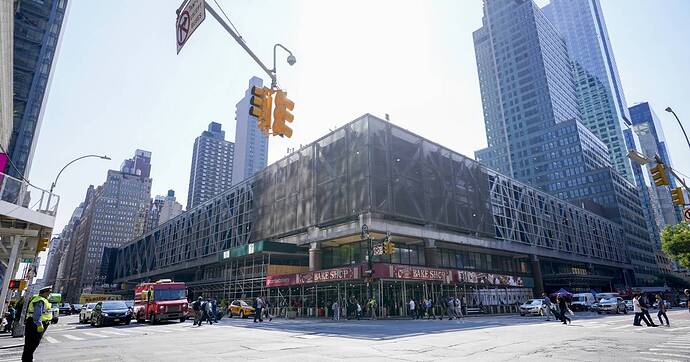 There’s lots to dislike about the yucky Port Authority Bus Terminal. And while the PA’s fix-up plan has some definite pluses, there are more questions than answers on a scheme that could run up to $10 billion. 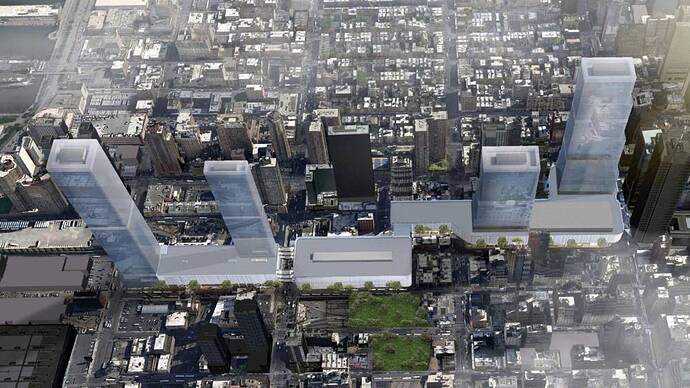 The Four Towers of PABT have their own topic:

On SSP, the four towers of the bus terminal have an extra topic. Therefore, I create it under reserve who thinks we do not need it, then this new link can be merged with the existing topic. Since we have one also extra topics on Penn Station and ESC. [image] „ The new terminal, which is expected to accommodate growth in bus traffic through 2050, is expected to complete the Federal environmental review process by Summer 2023. At that point, construction would occur in phases, allowing the exist…

A number of depictions and early plans I’ve seen show the outline of the upper portion of the terminal going beyond the property/lot lines a good amount. I really hope this is not the case as that would make the structure feel very overbearing to be over the sidewalk and possibly some of the street. That is why development are not allowed to build inhabitable spaces outside of the lot lines, to preserve street walls, and clear obstructions of the sidewalk and street to make it feel open.

The current dump of a building is already very heavy and it too slightly overhangs past the lot. Maybe use of different materials and color would lessen this impact of heaviness in the new terminal if it does overhang but it’d be better if it didn’t (which i’m sure there is a reason it overhangs in plans.)

Are you talking about when it goes over roads?
I saw that in one of the renderings and it looks awesome

Not really, though that will be an unusual sight to see (even though there are other examples around the city, but still few). An example would be a normal block in Manhattan is about 800’ x 200’, and the building outline is 840’ x 240’, so it overhangs the property line 20’ on each side.

Yep, every depiction from plans to conceptual renders to massing schemes, even to the latest render that was released, show the 3 eastern lots (of the 5 lots this project occupies) as overhanging beyond the property line, some even into the street.

I can’t help but feel that this is wishful thinking.

But wishful thinking of what exactly? That there will actually be parts of the building outside of the property line?