Alloy’s website has a new rendering of the firm’s plans for 511 West 35th Street, which will eventually house a skyscraper of approximately 500,000 square feet. The current reveal is tentative given the site may still trade hands; Related is making a concerted effort to acquire several lots along the future ‘Hudson Boulevard,’ including 511 West 35th Street.

Per Alloy, “[design] and entitlement work to date expresses the development potential and zoning freedom that the site affords,” corroborating the site’s uncertain future. If the rendered design is built, it would be a departure from the bulkier towers along the southern end of Hudson Boulevard.

Related would be the most sensible choice for the site’s developer, as the company owns an adjacent lot at 517 West 35th Street that can accommodate another large tower; combining the properties would yield air rights of approximately one million square feet, creating an opportunity for another potential supertall.

Given the zoning for 511 West 35th Street – which emphasizes commercial but also allows for a small residential component – the eventual tower will likely be mixed-use. Crain’s reports a significant interest in developing a hotel on-site, and if that does occur, it would become one of the largest on the far West Side.

The 17,281-square-foot site is located at 511 West 35th Street between 10th and 11th avenues and runs through to West 36th Street, according to an offering memorandum from Massey Knakal Realty Services. It offers 75 feet of frontage on West 35th Street and 100 feet on West 36th Street. The site is currently leased to a trucking company, but the lease contains a termination clause provided the tenant is given six months notice, according to the memorandum.

Spitzer Enterprises could build up to 172,000 square feet as of right, but with the purchase of additional air rights through the Eastern Rail Yard and a district improvement bonus, the company could go as big as 415,000 square feet, said Massey Knakal’s Bob Knakal, who represented both sides of the deal with his colleague, Stephen Palmese. Just under 104,000 square feet are zoned for residential use. The sale closed Dec. 19.

“It’s one of the great growth opportunities in Manhattan,” Spitzer told The Real Deal, referring to Hudson Yards. He is still brainstorming the best possible use for the site, whether “mixed-use, fully commercial, or hotel,” he said, declining to comment further.

Alloy paid $24 million for the site in 2007, city records show. Jared Della Valle, Alloy’s president, said that the company had “enjoyed seeing the neighborhood mature since our acquisition,” and was now focused on “new neighborhoods in a new administration.”

‪The site was expected to fetch about $75 million, as previously reported.‬

“This transaction reflects the tremendous demand of the Hudson Yards district, sure to become the most dynamic neighborhood in the city in years to come,” Knakal said.

The Related Companies, which is spearheading the Hudson Yards development along with Oxford Properties, was thought to be one of the potential bidders on the site. Related owns the property next door at 517 West 35th Street, and a deal for 511 West 35th Street would have allowed them to build a tower just shy of a million square feet.

Plans for 511 West 35th Street may or may not be changing now that Spitzer Enterprises has acquired the site, but YIMBY has new renderings of the most recent iteration that fully illustrate the site’s potential, which could be configured in several different ways.

The renderings come from former owner Alloy, and in their own words, they “completed design and entitlement work to express the development potential and zoning freedom that the site affords, and disposed of [511 West 35th Street] in 2014.”

Interestingly, the images were for a structure of approximately 450,000 square feet; yesterday, The Real Deal reported that Spitzer Enterprises intends to secure additional development rights that would boost the lot’s potential close to that number, which will be made possible by a $17.33 million contribution to the Hudson Yards District Improvement Fund.

Bernheimer Architects and the Architecture Resource Office produced the most recent design, which would have seen the site give rise to two towers, of 350 and 615 feet, linked on their lower levels by commercial space and a luxury hotel. The upper floors of the taller tower would have held condominiums.

While the Bernheimer and ARO scheme was innovative — positioning the site’s components in an attractive and interactive format — it is not the first plan; that honor goes to another vision conceived by ARO back in 2007. That iteration was less forward-thinking, though playful massing would have ensured something slightly more attractive than an otherwise boring glass box. Related bought the western half of the site last year, preventing Spitzer’s project from fronting Hudson Boulevard, and forcing the reconfiguration rendered in the most recent plans.

Although 511 West 35th Street is a mid-block site, it is nearly adjacent to the future Hudson Boulevard, and while surroundings will be dominated by supertalls, it will still be quite visible from the pedestrian perspective, and merits a striking design. Now that the site’s owner can act on its obvious potential, something sizable is guaranteed — and with recent vertical momentum in Manhattan, something exceeding the last version’s 615-foot pinnacle would seem likely.

Alloy’s most recent plans are unlikely to be used, but with Spitzer moving forward and acquiring the necessary air rights, 511 West 35th Street’s only remaining direction is up — though a larger company, likely Related, could integrate the parcel into a larger assemblage, resulting in something truly iconic.

In the meantime, permits are still lacking.

Eliot Spitzer is planning to build a hotel with a retail component on the Hudson Yards development site his firm snapped up last year for $88 million.

Good news!! Spitzer and Related has joined forces to combine their properties for 1.4 m sf development. Eliot Spitzer and the Related Companies are joining forces to build a 1.4 million-square-foot apartment-and-office development on a pair of adjacent s The Related Companies paid $96 million for the Far West Side site that will be part of the 1.4 million-square-foot, mixed-use project the company is d

The Hudson Yards developer closed less than two weeks ago on the site at 517 West 35th Street, property records filed with the city Wednesday show. Eliot Spitzer needs little introduction. Most know him as the New York governor who resigned in the wake of a prostitution scandal in 2008. But the 59 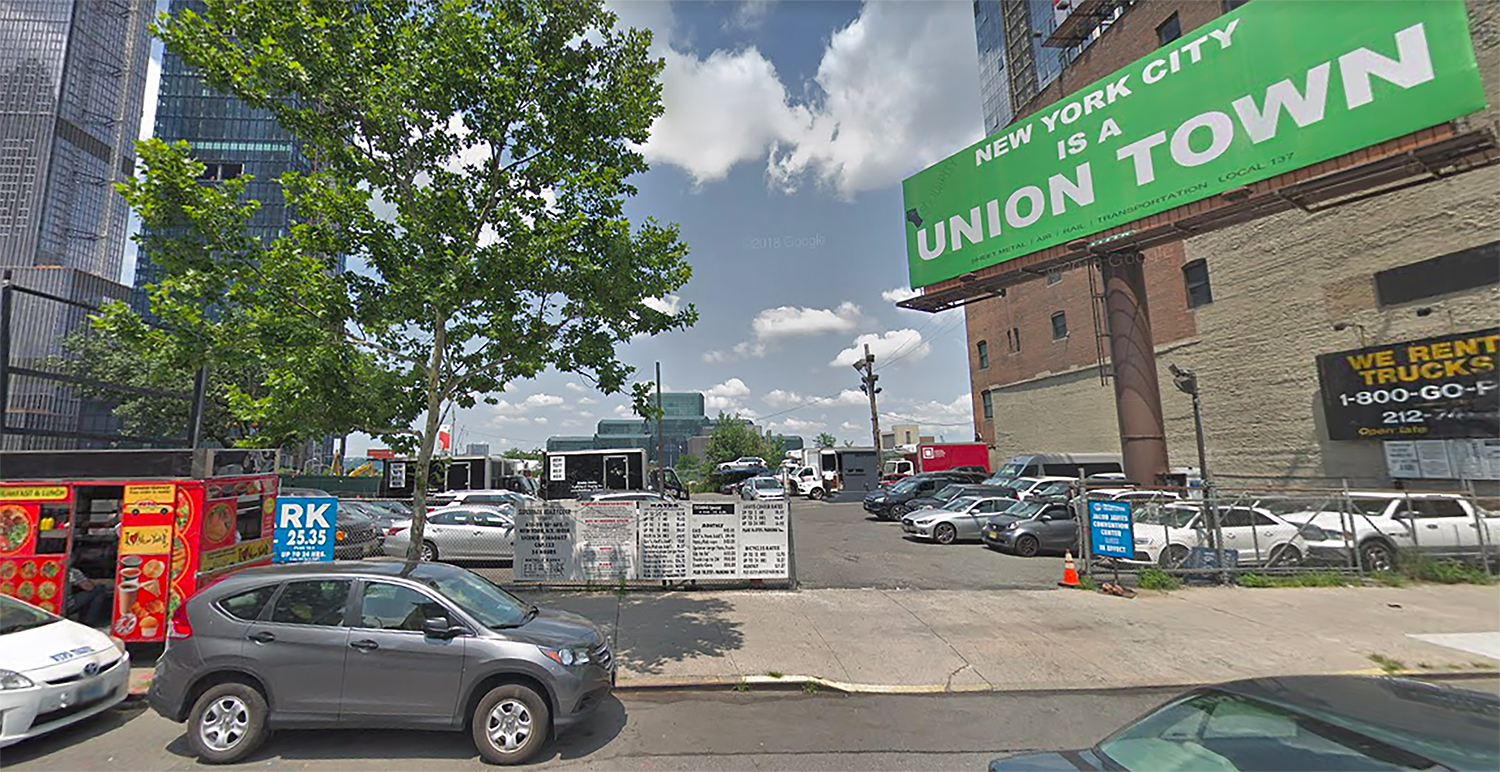 YIMBY has the latest permits filed by Related Companies for a 44-story mixed-use skyscraper at 451 10th Avenue in Hudson Yards, Manhattan.

In 2017, Spitzer Enterprises and Related Companies announced a partnership to develop a two-tower, 1.4-million-square-foot project at that site.

Another great scoop by Yimby!

Shame Spitzer didn’t seem to make a big push to buy Hudson Mercantile (the brick and steel low-rise next door) which will be losing a big portion of it Southern and Western views thanks to this.

So if I’m understanding correctly, there’s still roughly a million square feet left of the total 1.4M planned, meaning the second tower should be really substantial. Or have they not actually acquired all those rights?

@ILNY posted a progress update with a basic rendering/drawing

I believe this is on the construction fence

Eliot Spitzer and Related Companies have landed about $276 million in financing for their Hudson Yards project.

Last week, Related and Atria Senior Living — along with Spitzer and real estate investment trust Welltower Inc. — said it had closed on a partnership at the property. Development began late last year and is expected to be completed in 2022.

That tower in the image looks like a supertall. Is that the second planned tower?

It’s from several years ago so I think it’s just another outdated rendering from before the Spitzer/Related teamup. I’m expecting another glass box for phase 2.