I understand that part, but why is the right diagram taller than the left 2, especially when super imposed on them. That’s not showing the instance you’re describing, because both left diagrams show the whole building model, core/structure/envelope/etc, the right model just shows the core and structure, but it shouldn’t be sticking out of the left 2 models. It’s like it was accidentally shifted upwards because it’s actually distorting the whole perception of the left 2 diagrams.

The diagram in it’s entirety looks professionally made and accurate but for the otherwise slip, but I’m questioned as to the veracity of it’s source, which came from a freelancer website, because a GC like Aecom Tishman would never publish incorrect drawings and definitely would not have put “skyscrape”. I’ll take these drawings with a grain of salt now… otherwise, I still think the physical model at the SOM offices is the latest version of the crown.

Maybe you’re having a display problem? They look identical in height to me.

Those models also show a refinement to the supports surrounding each setback level — namely, they now appear to be slightly curved instead of hard angles. This is a massive improvement if accurate. The hard angles on the setback floors juxtaposed against the curved lines at the base and crown in the previous models was an unsightly mess.

I’m still not a big fan of the massing, but this design is steadily improving in my esteem.

Is no one but me seeing this?! I am not crazy!

The structural diagram has literally been superimposed on the first 2 diagrams and shifted upwards, it is not supposed to look like that, as if there are double of everything, the crown, setbacks, and base. 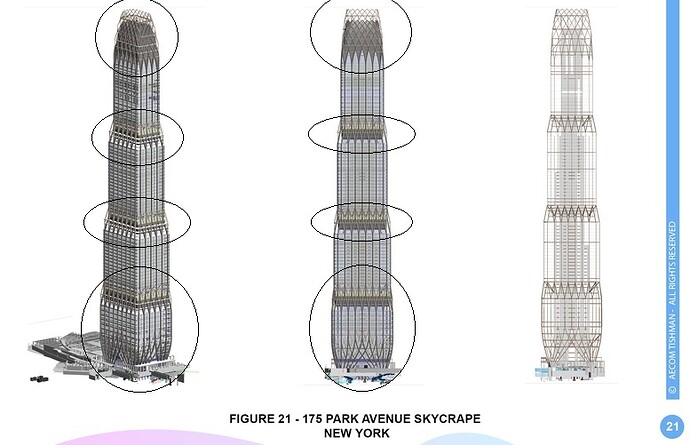 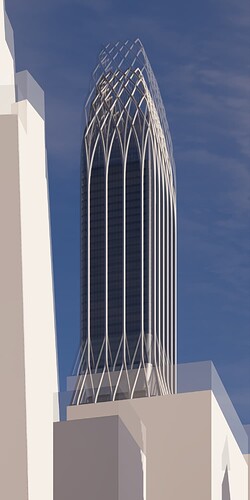 As far as the setback geometry goes, there has always been a slight curve on the angles where they intersect with each other, they were never hard angles. But the angled portion itself can not curve because that would be a structural column under immense probability to buckle if curved in a manner similar to the crown and base. But, only the cladding covering the columns are curved/filleted, the column itself and it’s connections are angular. 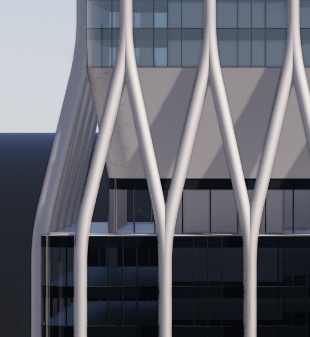 Withholding that I’m still in my software grace period, I’d like to make a 3d model of the structure.

Love seeing this content years before the real thing. It really shows how this thing will be constructed and look in the future

You’re not crazy, I think I know what it is. The external facade we see will be the main shape, but internally the walls seem to curve back to the top. Why is this space here? I believe it could be for lighting. Look at the Comcast Center in Philadelphia and One World Trade Center, they have walls behind the glass with space to walk around…and have decorative lighting

I don’t think that’s it because both the other diagrams “have” (what is shown in the right diagram) the structure in them already. We are not seeing a double skin situation like those that exist in your examples, I believe simply what is being shown is an accident, because like I said, this is not from Aecom Tishman, it is from a freelancer BIM modeler in Vietnam, AT would not make such a mistake or allow incorrect information/depictions to be published.

The structural model has simply been shifted upward the Z axis because the floors are also all over the place. The crown is not the only awkward thing affected, like I mentioned, both the setback levels and the base can be seen as repeating, if it were like this, the right diagram would also show this repeating because it is the structural diagram, but it does not.

I posted more views and perspectives on my IG

I’m showing the simplest of the primary structure (columns/girder/beams). Secondary structure and construction are not featured/modeled.

Great job, can’t wait for this to start!

Interesting article:
“Rechler, the chief executive of property developer RXR, is preparing to surrender some of his offices to lenders…With some of those, I don’t think there’s anything we can do with them…[comparing obsolete office buildings to new] best example of the latter is SL Green’s One Vanderbilt, which soars over Grand Central Station and has fetched record rents, even in the midst of the pandemic. Rechler is hoping that RXR’s forthcoming 175 Park, which will be the western hemisphere’s tallest building when it is completed, will eventually surpass it.”

“We’ve had more showings for that building in the last, call it, 60 days, then we’ve had for the rest of our portfolio,”

"which will be the western hemisphere’s tallest building when it is completed, will eventually surpass it.”

Ignoring the fact that it’s never been shown or stated anywhere near 1,776 ft tall, it’s barely been shown taller than CPT. When completed it might not even be third tallest in this city, much less with other proposals in other cities (like Triumph Tower in Brazil)

I hope that he plans to surpass Central Park Tower. Obviously, like everyone else, Rechler does not deem 1 WTC to be 1,776’ tall.

Then he would be wrong.

I’m with Robert. With the change to the spire design to merely a functional antenna, 1 WTC should not be classified as 1776’.

I barely consider BoA 1200’ and that’s a true architectural spire. ‘Authorities’ can call it as they wish.

From the FT article 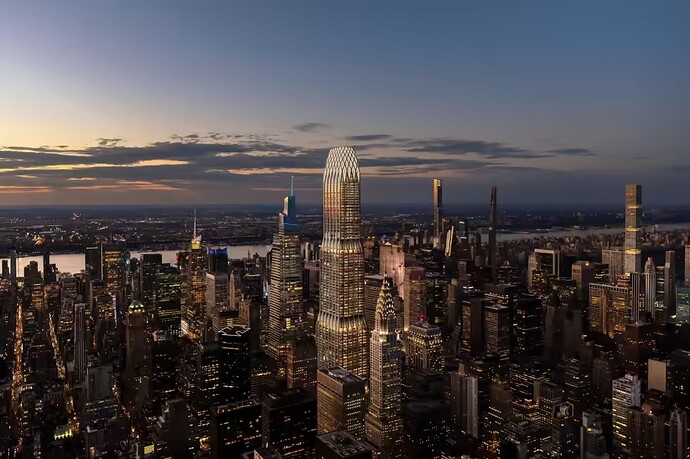 As always, too short but magnificent design. I wonder if the lighting will stay that white all the time like the Chrysler or change like 1 Vanderbilt. I think it would look nice just staying that white.

He mentioned something to the same effect at the NYU conference. He called it the tallest building in the West. I agree he probably means by roof height.