While previous permits for 22 Thames revealed the height to its highest occupied floor, the elevation of the tower’s pinnacle remained a mystery; now, DOB documents confirm that the skyscraper will stand 960 feet in total, making it the tallest residential building in Lower Manhattan. Fisher Brothers and The Witkoff Group are developing the site, and the architect is Rafael Vinoly.

22 Thames elevation diagram via the DOB

Downtown’s race to the sky began with the new World Trade Center, but the latest round of residential towers is narrowing the gap; 22 Thames will stand just 17 feet shy of 150 Greenwich Street, located one block to the north. 150 Greenwich will still be far bulkier than 22 Thames — consequently, maintaining its prominence — but Vinoly’s latest addition to the skyline will be impressive in its own right.

22 Thames Approved, via the DOB

Per the DOB, 22 Thames will total 359,130 square feet, with retail occupying 11,435 square feet on the first two levels. The remainder of the 70-story building will be residential, with standardized floor-plates just shy of 6,500 square feet.

Perhaps the height of 22 Thames is most surprising because it will be rentals, unlike nearby skyscrapers at 56 Leonard and 30 Park Place; the market for buildings of significant height has been almost entirely dominated by product that can be bought and sold.

The Financial District may soon provide proof of profitability for extremely tall rental developments, as 70 Pine Street — which stands 952 feet to its pinnacle — also happens to be undergoing a conversion to apartments. While the site is currently for-sale, 111 Washington Street could also yield a tower of similar proportions to 22 Thames.

It seems that the Fisher Brothers’ latest venture in Lower Manhattan will provide a crucial litmus test on the demand for rental product at soaring heights, and if the condo boom is any indication, the development will be a major success. 70 Pine’s imminent lease-up will be an equally important indicator, and combined with 22 Thames, the towers could determine whether rentals in the Financial District begin to soar even taller.

22 Thames Street at right, site for new Marriott at 133 Greenwich at left

The ever effervescent Michael Shvo is planning a big and tall tower for downtown.

Locals tell us the developer and condo marketer is in contract to buy a site at 22 Thames (aka 125 Greenwich) from Fisher Bros. and Steven Witkoff for around $180 million.

The broker is Andrew Scandalios of HFF, who did not return requests for comment.

Witkoff and the Fishers simply could not turn down the price that is roughly $90 million more than the $87.5 million they paid in September 2012.

As first revealed by New York Yimby, they had plans to build a 359,130 square-foot, 956 foot-tall project designed by Rafael Vinoly, with 70 floors of 6,489 square feet geared to rental units.

But Shvo will likely redesign the tower with smaller floor plates for grand, full and half-floor luxury condos.

Add a sprinkling of street retail plus a hotel base and the residential views will tower over the World Trade Center, Statue of Liberty and New York Harbor.

There is no height limit, and for a visionary like Shvo, there are no limits.

The former marketeer for others before the 2007 bubble burst resurfaced last year with his own developments, and now has two shorter ones planned with different partners at 239 Tenth Ave. and 100 Varick, but this one would be a dramatic signature skyline statement.

Shvo did not return requests for comment. Stay tuned.

Shvosome! This will be as hot as Mrs. Shvo!! 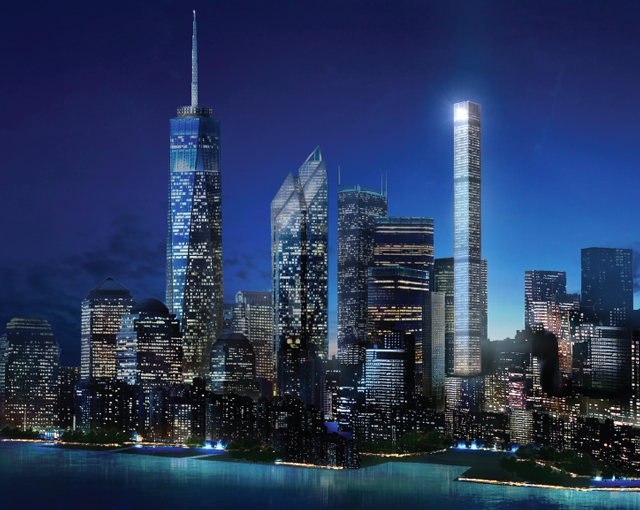 YIMBY has the reveal for 125 Greenwich Street, which will become Downtown’s tallest residential skyscraper; a tipster close to the development passed along images and schematics confirming the tower’s significant growth spurt, and it will stand 1,356 feet tall. The project was formerly known as 22 Thames, but traded hands earlier this year, when Michael Shvo and Bizzi & Partners purchased the site for $185 million; the deal closed last week, signaling that plans are close to moving forward. 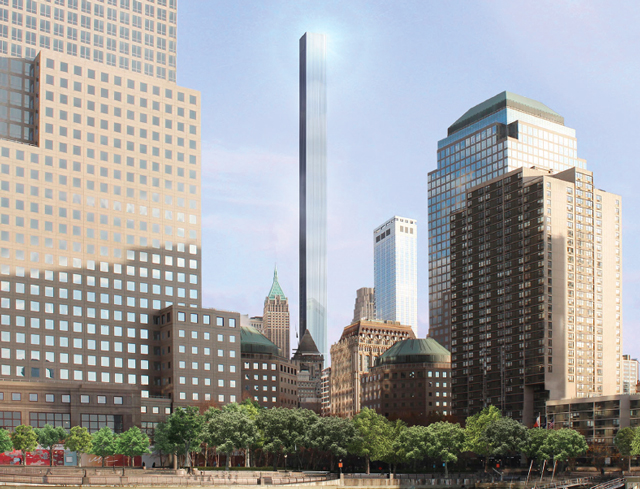 Rafael Vinoly designed the original 961-foot tower for the site, and he has been retained as the architect; the new version will top-out just a dozen feet shy of One World Trade Center’s roof, making it the second tallest building in Lower Manhattan — and the first Downtown residential skyscraper to rival the supertalls of 57th Street. The transition from rentals to condominiums explains the sudden bump in height.

432 Park Avenue’s oblique Downtown sibling will be similarly slim, soaring 77 stories at a pencil-like width. The floor count has only gone up by seven, and the majority of the height increase can be attributed to the enormous ceilings; slab heights are 13 feet through the 38th floor, 16 feet from 40-65, and an enormous 24 feet from 67 through 77 (per the zoomable site-plan and stacking diagram).

Ten full-floor penthouses will measure 5,300 square feet apiece, and the tower will be capped by a 10,600 square foot duplex, which could vie for the title of Lower Manhattan’s most expensive residence. The top of the Woolworth is on the market for $110 million, but that number may be somewhat of a stretch; the flexibility for configuration and unsurpassed views will certainly give 125 Greenwich an edge in terms of appeal.

125 Greenwich Street will total 128 units, and while pricing is not yet available, the closest approximations would appear to be One Wall Street, which is on the way to condominium conversion, and 101 Murray Street, which will be the nearest Downtown competitor in terms of height. That project is being developed by Fisher Brothers — former owners of 125 Greenwich — and is set to stand approximately 1,000 feet tall. 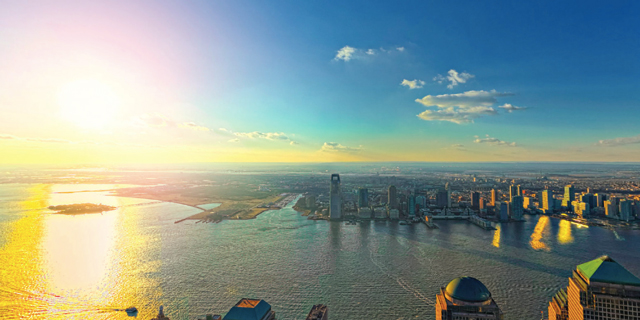 Work on the current crop of cranes dotting the cityscape, including 56 Leonard, 30 Park Place and 50 West Street, will likely wrap up well before Shvo’s tower is complete. Unlike the aforementioned, 125 Greenwich Street will actually add to the pedestrian sphere, and the retail space on lower levels will enliven a corner immediately opposite the new World Trade Center Memorial. 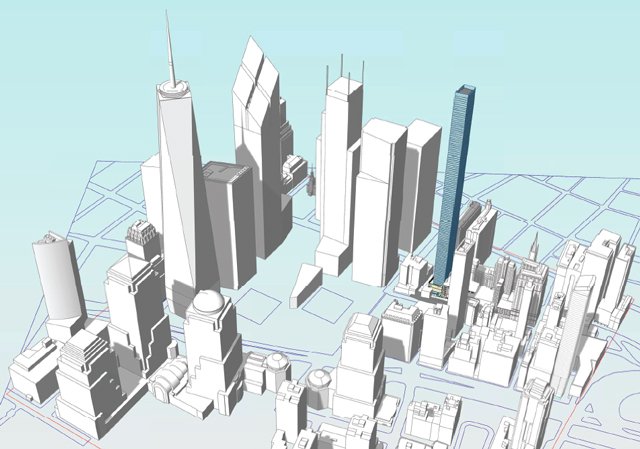 While the conservative envelope of 432 Park Avenue faced significant criticism when the design was first revealed, the end result is quite appealing, and will be especially attractive when viewed against multiple 1,400-foot neighbors, rising in the immediate future. In a similar context, proximity to the World Trade Center will ensure 125 Greenwich blends into the Lower Manhattan skyline, though sheer height will still lend it ample distinction.

No completion date has been set, and permits for the revised design have not yet been filed.

I absolutely love this!
Love the little box at the top created by the mechanical floors, although it seems like a glassy 432 PA; to me it is a futuristic version of a typical glass New York box

It also compliments the WTC, although it being just as tall, its slimness helps to make the WTC towers larger and the simple design helps to express the design of the WTC towers more as well!

It also bookmarks the WTC from the opposite end of 1WTC

I’d like to see an original and unique crown, TBH – something to really make this pop against the WTC. Does anyone know how wide this building is?

Shvo isn’t playing around when he goes big. Some good foreshadowing for Shvo’s Midtown tower. This adds some nice balance to the complex. 432 Park Ave, only better.

I like how Lower Manhattan is going the way of Hong Kong with tall and skinny towers. After 9/11, the idea of tall towers near the WTC site was shuttered, and now, that notion is gone. Like 432 Park Ave, from the street level, it will appear taller then it is given its thinness which is always a great illusion for us development lovers.

Balance? Not that the skyline is sacrosanct, far from it, god forbid, but basically all that remains of Danny’s master plan is the symmetry of the towers, which will now be erased by what will probably be far cheaper and chincier than what’s planned. 4 WTC is the beauty of the site, now it’ll be lost to something on par with the East Side Trump, one of the worst in town. Ugh. Shvo. What a tool.

Tower 4 is a (fat) box too or am I missing something? 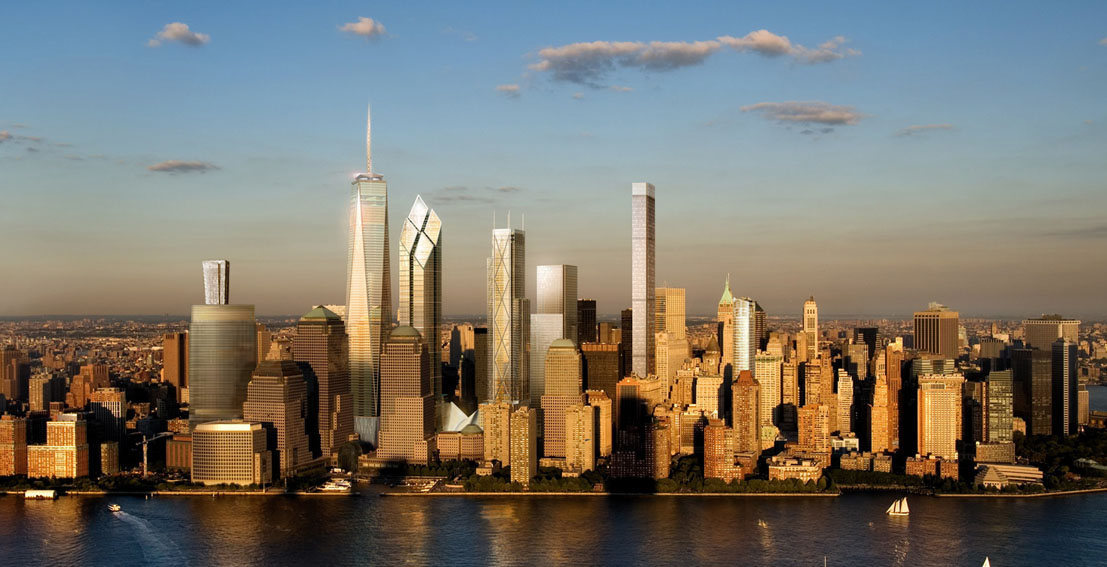 Distracting. Not in a good way. The Indian pharma tycoon Dilip Shanghvi has invested $40 million in the planned luxury tower, according to sources familiar with the transaction.

Shanghvi, founder of the pharmaceutical giant Sun Pharma, is Asia’s seventh-richest person with a net worth of $13.5 billion, according to research firm Wealth-X.

The investment is part of a financing package arranged by the Carlton Group. When Shvo and co-developer Bizzi Partners closed on the site in August, The Real Deal reported that the partners had secured equity financing from Howard Lorber as well as an unnamed Chinese company, and $170 million in debt from a Singapore-based bank and an unnamed “Indian private equity firm.” At the time, Shanghvi’s name was not mentioned.

Since 432 Park turned out better than expected, I look forward to this one. 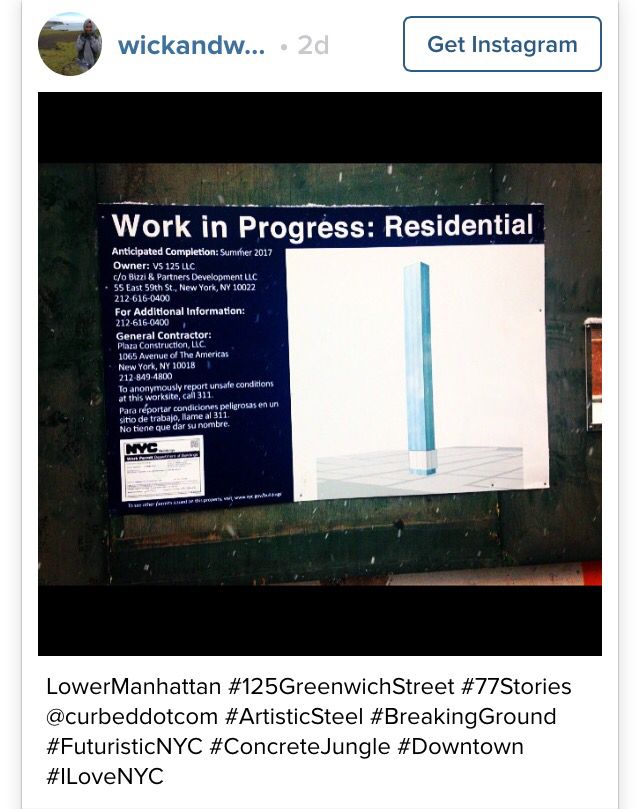 A tipster informs us that work started this weekend at 125 Greenwich Street, the future site of the 1,356-square-foot tower that Michael Shvo (along with Bizzi Partners) is developing, which, going by the renderings, looks like it’s going to be a tall, slim, completely unembellished glass rectangle. The 77-story Rafael Vinoly-designed building will be Downtown’s tallest residential tower, and will stand only 23 feet shorter than the city’s record-holder, 432 Park Avenue. There is no targeted completion yet as of yet for the ambitious project, which will contain a total of 128 apartments, including 10 5,300-square-foot full-floor penthouses and a 10,600-square-foot duplex penthouse.

There are rumours going around that this may have had a height decrease to around 800ft or so; and based on that massing model it does look shorter/fatter than the previous Shvo model

However, I know Vinoly doesn’t have direct control over the height and scale of this building; but he is known for designing some fairly controversial buildings such as 20 Fenchurch Street and 432 PA

He has the balls to designing something that stands out and is different; whether good or bad, so I think he’s perfect for designing 400m+ tower right next to the WTC site; it’d be a real shame if this is just another 800ft tower imo

I heard that it was the permit at the site, and how sometimes they put older ones instead of new. But I’ve heard those rumors. I don’t think they are true though, I hope at least…

I love that! I love the indents for open spaces!
Some nice Vertical lines in the centre which lead to the spire, also some nice -but simple setback at the top as well!

The spire is also fairly simple but it looks very solid and quite thick as well!