The first permits are up for a new development at 12 West 55th Street, though if recent news is any indication, the DOB filings do not tell the whole story. Curbed recently reported on rejected permits filed last year, and The New York Post covered the site back in 2009, when JD Carlisle acquired the site from Lincoln Properties. Perkins Eastman is now the architect of record, with Cornerstone Advisers representing ’12-18 West 55th Street Pre-Development,’ which is likely an alias for JD Carlisle.

Yesterday’s filings indicate that 12 West 55th Street will soon stand six stories tall, with an interior spanning 27,204 square feet. The entirety of the project will be residential, with four residences in total; simple math gives an average unit size of nearly 7,000 square feet, which would be enormous.

As Curbed and the Post previously reported, Carlisle has amassed a relatively large assemblage, with air rights totaling over 100,000 square feet; the previous plan for the site indicated a 55-unit and 22-story building would rise in place of the current townhomes.

It would seem that the most recent DOB documents are missing a large portion of the site’s available FAR rights. Given the assemblage spans from 12-18 West 55th Street, additional filings at another address appear to be likely. Regardless of semantics, Perkins Eastman’s involvement is a positive sign for the future building’s appearance, and if the current filings do come to fruition, units averaging nearly 7,000 square feet will command a top-notch design.

No completion date for the project has been announced.

This is a super-prime spot next to the Peninsula. I wonder what air rights it has.

I hope that JD Carlisle plans something magnificent for this amazing site next to the Peninsula!

The tower will soar over these landmarked structures which are located behind JD Carlisle’s site.

JD Carlyle clearly is a Samuel Beckett fan. I hope that, in time, a new tower soars over the gorgeous old Peninsula Hotel!

The new hotel around the corner from here on 56th Street is very nice, this should also make for nice filler.

I agree. It’s beautiful. I’m waiting for them to take the stickers off those gorgeous windows.

How tall do you think this will be, Robert?

The progress of demolition, when compared to 10 W 55th (on the left), is clear.

These gems deserve a great neighbor!

Demo permits were recently filed for the little PoS with the “Mingle” sign.

Only the crappy little building remains for the wrecking ball, but demo permits were filed.

The little PoS at 10 W 55th should come down soon.

As per the NYP, This site flipped, and nothing too tall will rise.

The NYP made no reference to 10 W 55th. I hope that little eyesore comes down.

A stalled Plaza District site that’s been bouncing around for a decade may have finally landed in the deep pockets of a developer who can get it done. Orin Wilf’s Skyline Developers has just purcha…

my interest has been piqued. Adjmi is designing. 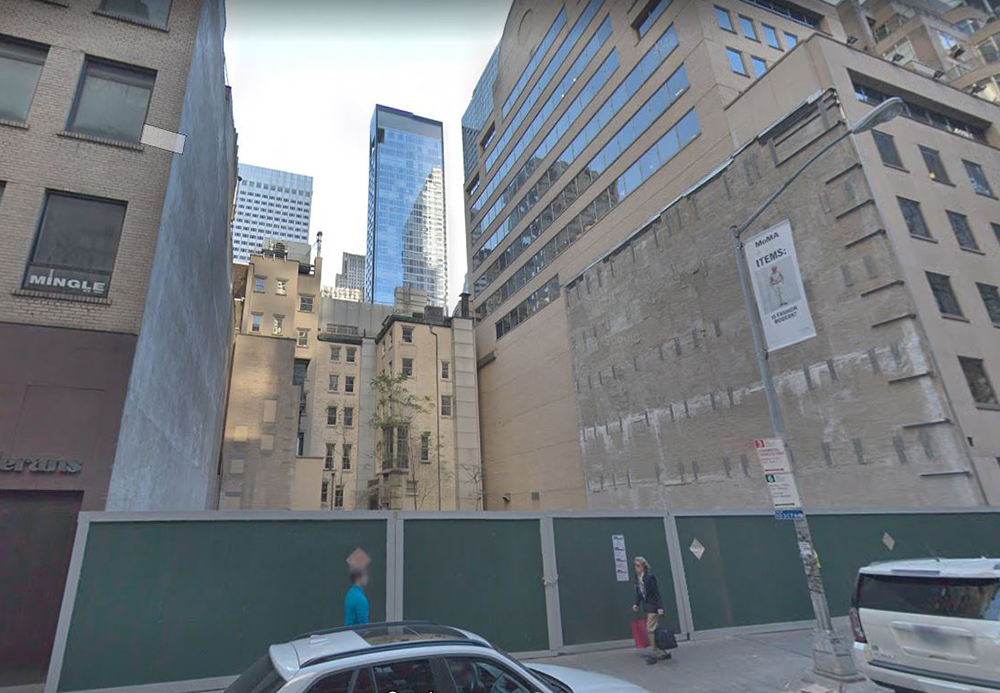 The 24-story building will feature over 100 residences and include a series of six setbacks on West 55th Street providing views in all directions. It will include 11,500 s/fof retail space.

“12 West 55th Street will be designed as a modern interpretation of a pre-war skyscraper. The building will fit into the surrounding context of the area, while adding a unique element to the Manhattan skyline,” said Morris Adjmi, principal of Morris Adjmi Architects.

Construction on 12 West 55th Street is expected to begin in Spring 2019.